Gather your friends and family close to celebrate.

As the US prepares for Thanksgiving (the annual holiday of family and gratitude that has been perverted by numerous capitalist ventures over recent years), I'd like to take this opportunity and thank all of the companies and individuals who have helped me make Dave Taylor Miniatures a viable capitalist venture of its very own (although not one that'll be sending its employee to work on Turkey Day).

I would like to thank - in no particular order - the following miniatures businesses (or groups) for their patronage, and urge you to check them out over the coming year:

Additionally, I'd like to thank the following commission patrons for their support:

To all those celebrating, Happy Turkey Day!
To those who are not, Happy Thursday!

Although things have been a bit tough recently (car problems and a wicked cold that laid me out over the weekend), I wanted to take the time to drawn your attention to the fine folks at Fresh Coast Gaming who are organizing Foodhammer 2014. They've run this event in Michigan for the last few years and are ready to rock out again on December 6th! 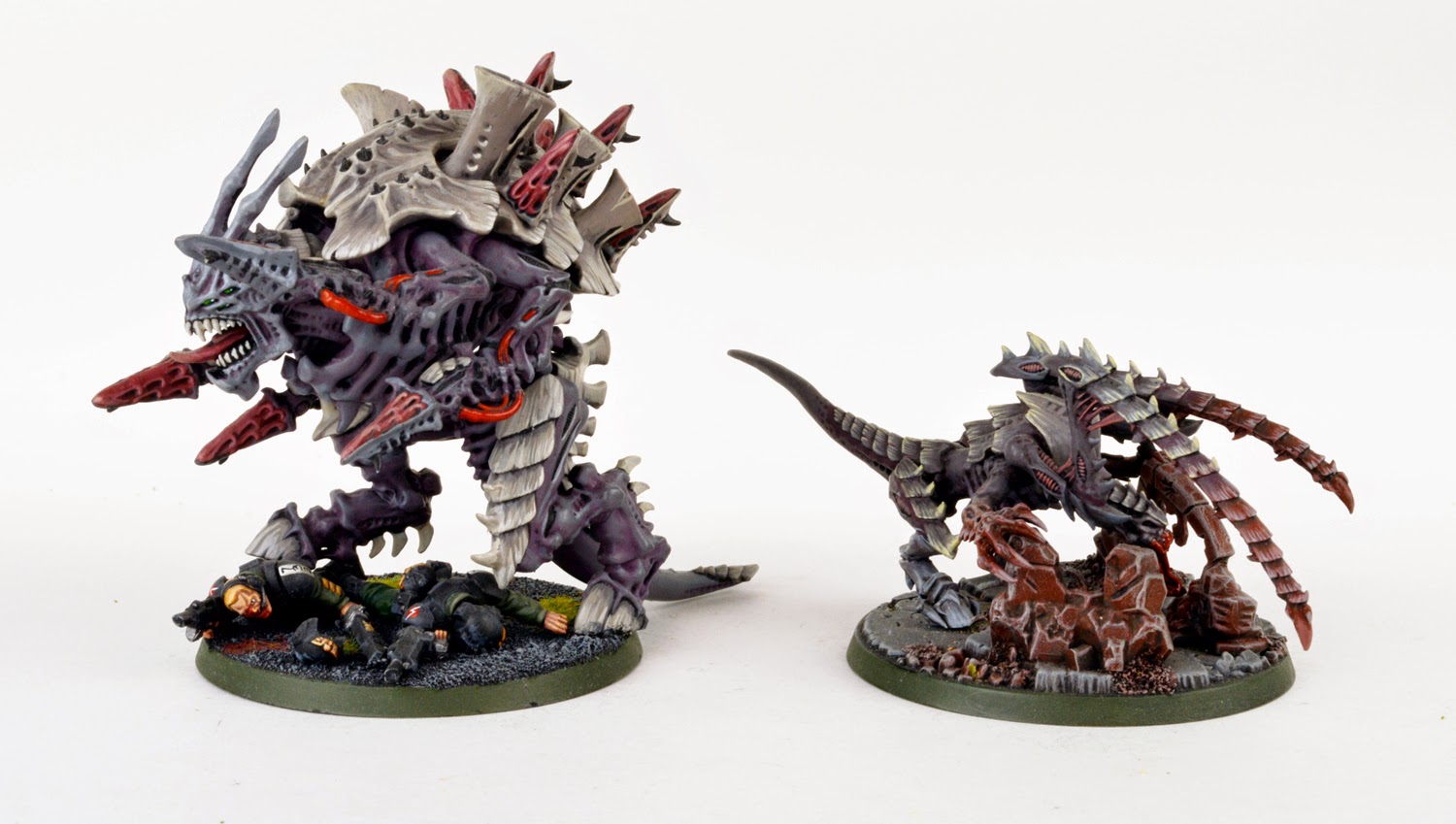 I'll be seeing off these two beasties to join their massive (and growing) prize pool. I worked on these models back in the day of the GW US Studio team, and both have appeared in WD. The Lictor on the right was actually painted up to go into the 4th Edition Tyranid Codex (I think), but was beaten out (appropriately so) by Victoria Lamb's atmospheric piece.

Anyway, if you are in Michigan and are looking for something to do, please check out the excellent Foodhammer event! 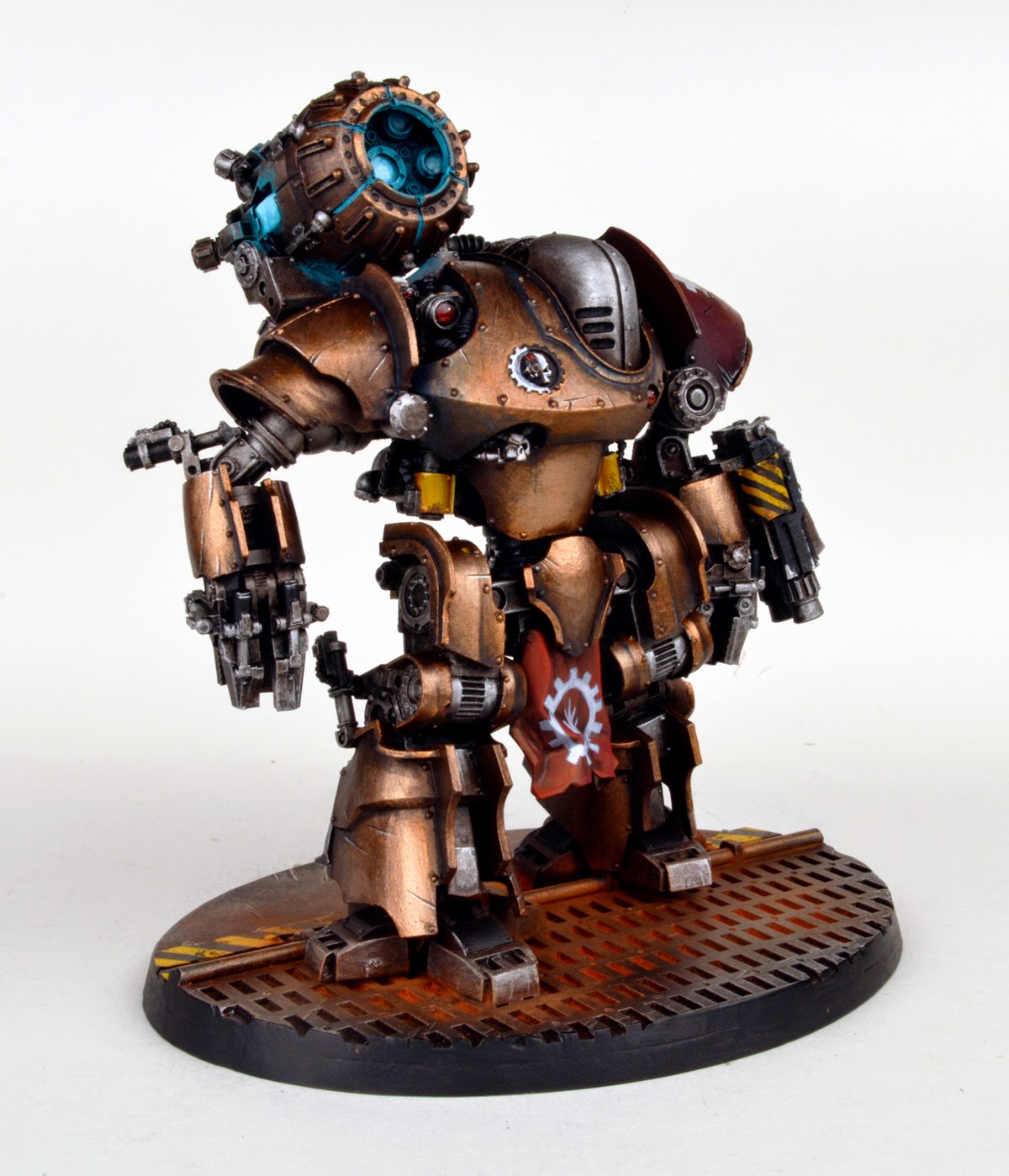 Well, next March is the actual event, but I wanted to point out that the registration for AdeptiCon 2015 is only a few days away! On Monday November 24, at 8pm Central time (that's 2am Tuesday morning for you folks in the UK) to events web cart will go live. Many events at AdeptiCon sell out on the first night and many more over the following days, so I heartily recommend you check out the event listing so that you can be ready when the crew flip the switch! The AdeptiCon team are using a new, more robust system, so it's worth taking a few moments to familiarize yourself with it.

To check out the listing of over 280 events, click HERE.

This year, for the first time ever, I'll be running two Hobby classes (well, technically it's the same content, just at two different times). That's right, I'm running the Liber Metallica: Dave Taylor Edition on the Saturday and Sunday morning.

Quite a few people have asked me questions about my metallics over the years, so I figured this was a good opportunity to present my thoughts on the topic of true metallics. I hope to see you there. 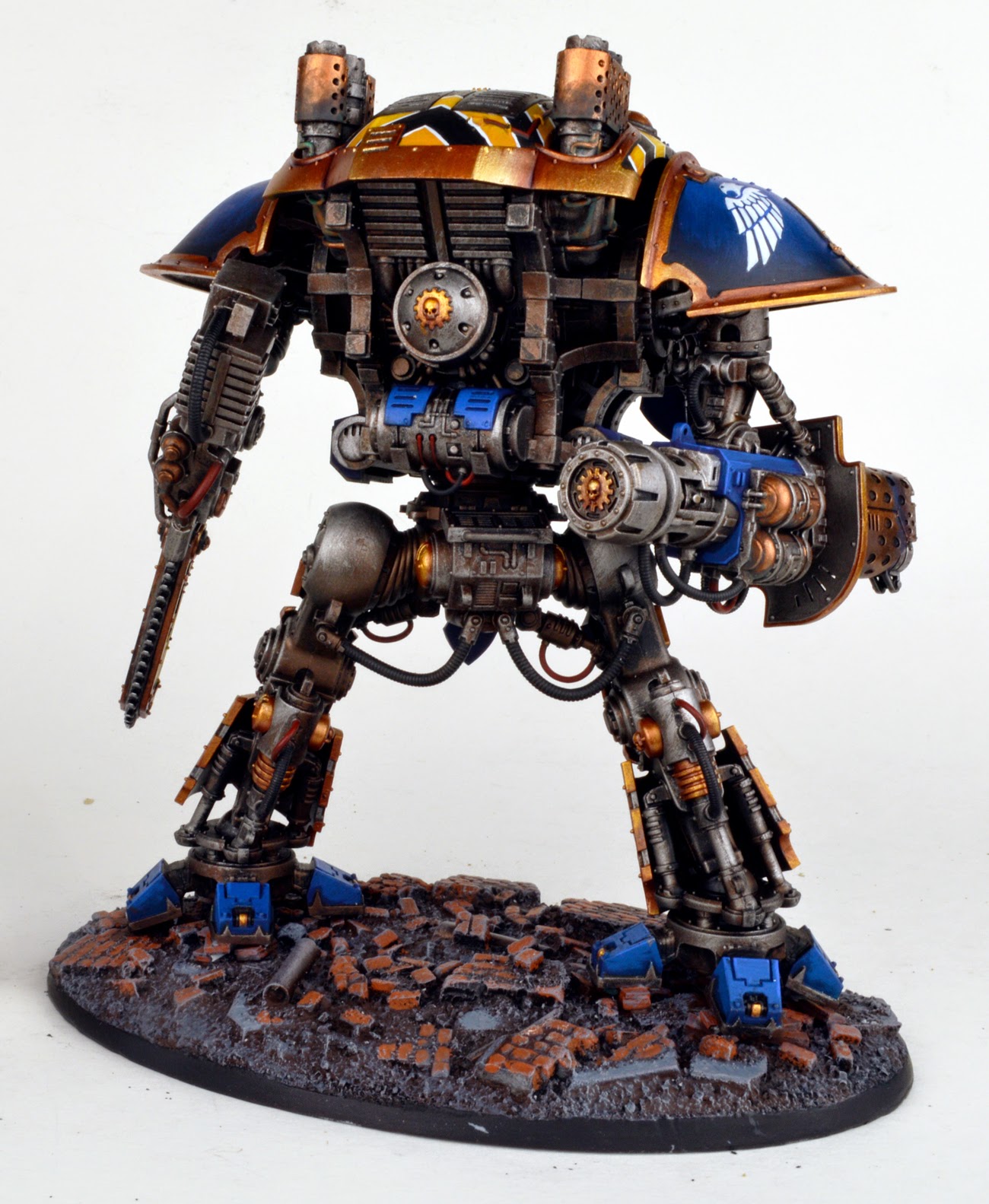 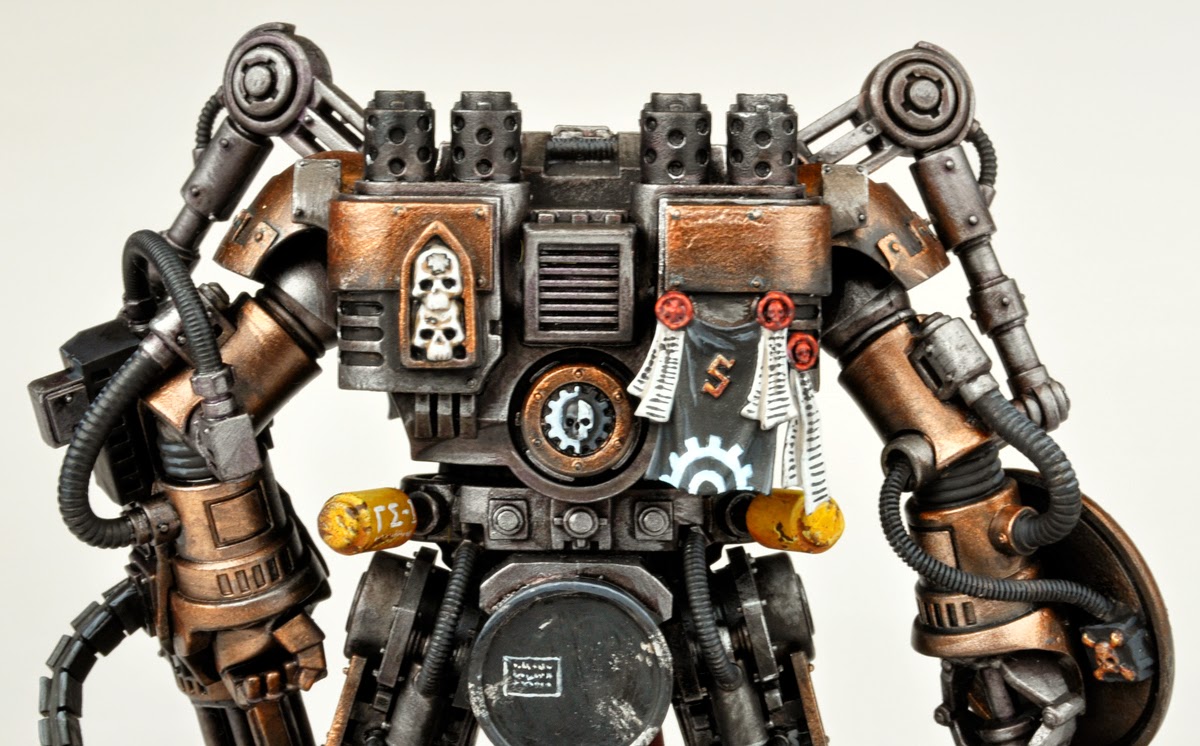 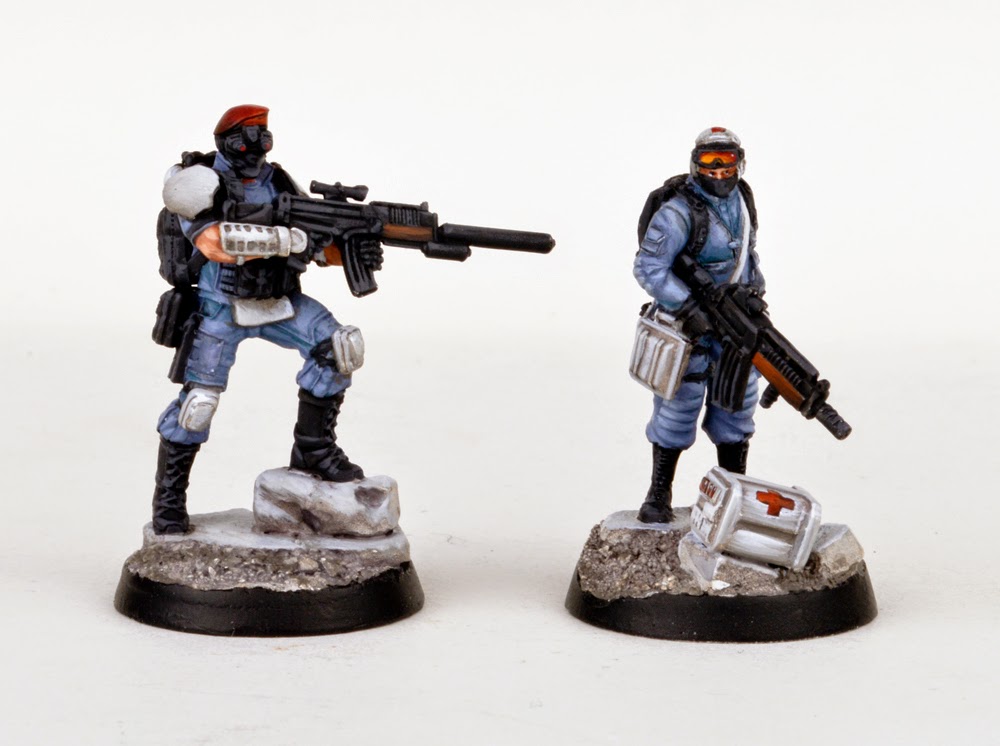 ...underneath I've been paddling away like a duck. The car thing has taken some time away from fun, hobby stuff, but hopefully that will be restored in the next week or so. In the meantime I have a few cool things to show you, and will hopefully have the time to get them posted. Can you tell from this that I'm quite hopeful? : ) 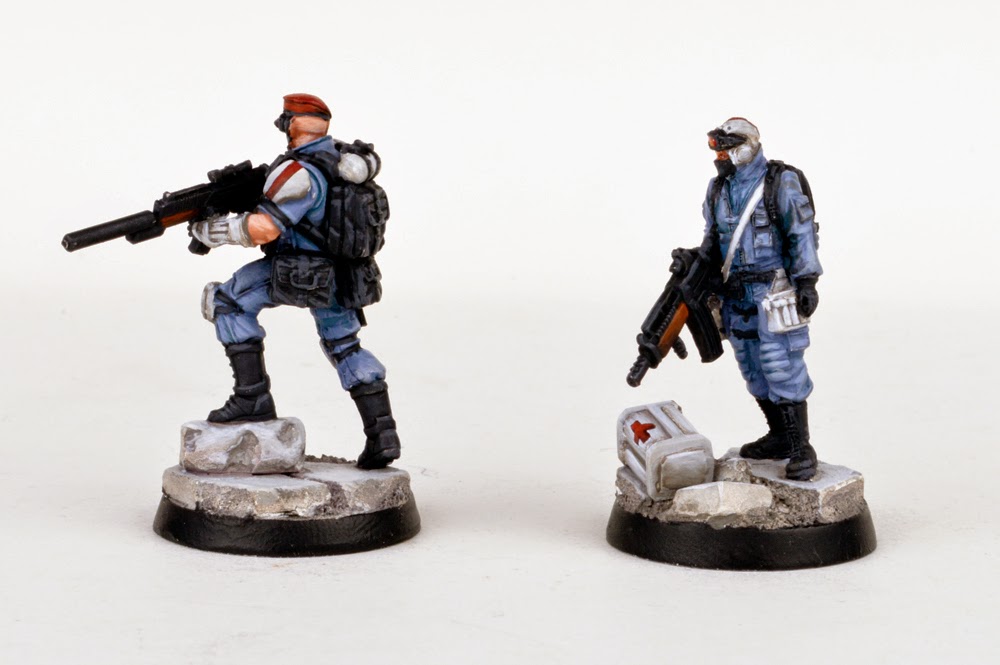 Anyway, you might remember this commission from earlier in the year? My friend Brien decided to add a few new models to his Ariadna force, and I was happy to oblige. It was a fairly simple matter to match the paintwork from the original models, as you can see in the photo below. They fit in pretty well. 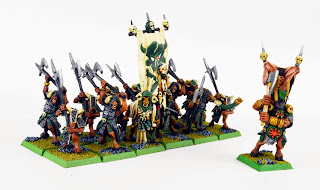 Charity efforts, an update. And a Death Guard Moritat. 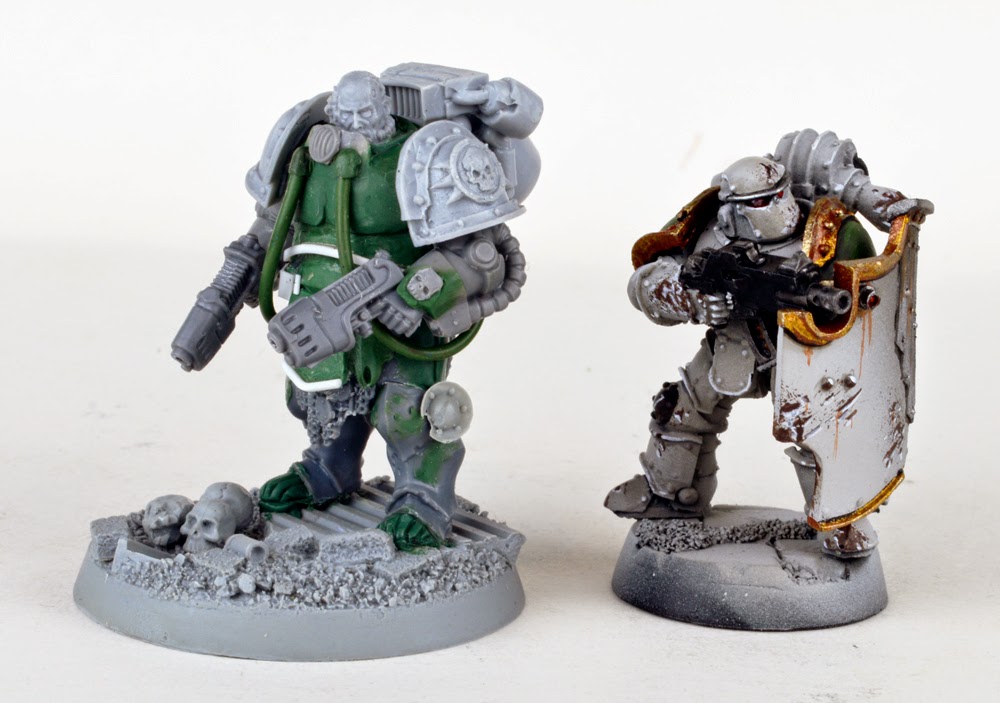 Well, let's get the Moritat out of the way. I've only faced one of these guys in my handful of 30K games. It was at the Old Line Massacre back in June, and the Night Lords Moritat armed with two plasma pistols took out my Arch Magos Prime in a single round of shooting. Impressive to say the least. Many online will decry this particular loadout, and many gamers have banned it from play in their gaming groups. Is it a nasty combination? Yes. Will I get t use it all that often? Not really. Did I just want to model a BIG guy for my Death Guard? You betcha.

In the photo above he's standing next to one of my recently finished Breachers, both are on Dragon Forge bases. 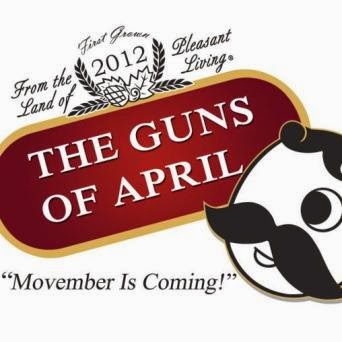 The last two years I've participated in the charity activity that is Movember, growing a mustache to both raise awareness of men's health issues, and money for research into same. This year I have a lot going on, and couldn't divert energy away to keep up with the regular promotion required to make such an endeavor a success. So, I won't be growing a mo this year. Instead, I urge you to check out the page of my friends Brien and Chris who'll be rocking the 'stache all month long!

To make sure I'm still giving this November, I'll be donating these two units of 15mm American Civil War models to the Toys For Tots auction being run by the Wednesday Night Painting Group at Fall-In this coming weekend. Shawn and the team have been running this for a number of years now, and each year it continues to grow. If you are in the market for 15mm ACW units and are going to Fall-In, please stop by the Silent Auction and put in the winning bid ; ) 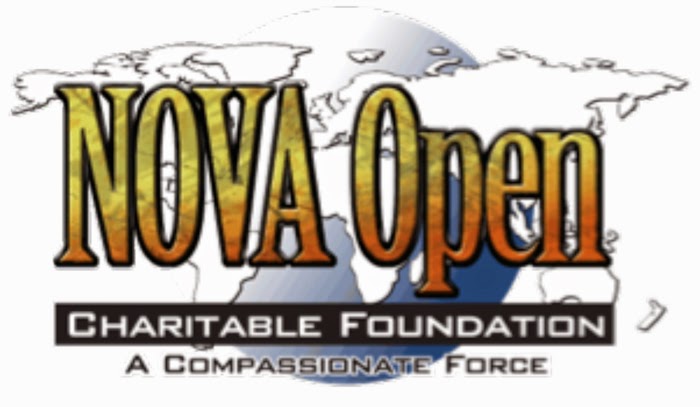 Finally I can now announce that, following the success of the 2014 NOVA Open Charitable Foundation activities, I've been invited to join the board of the NOCF. Last night I attended my first board meeting, and I am happy to say that we'll be growing the offering of the raffles and auctions and other activities. As soon as our plans are locked down we'll start to roll out the good news : )

Have a great Wednesday, everyone!

Cheers
Dave
Posted by davetaylor at 6:56 AM 16 comments: