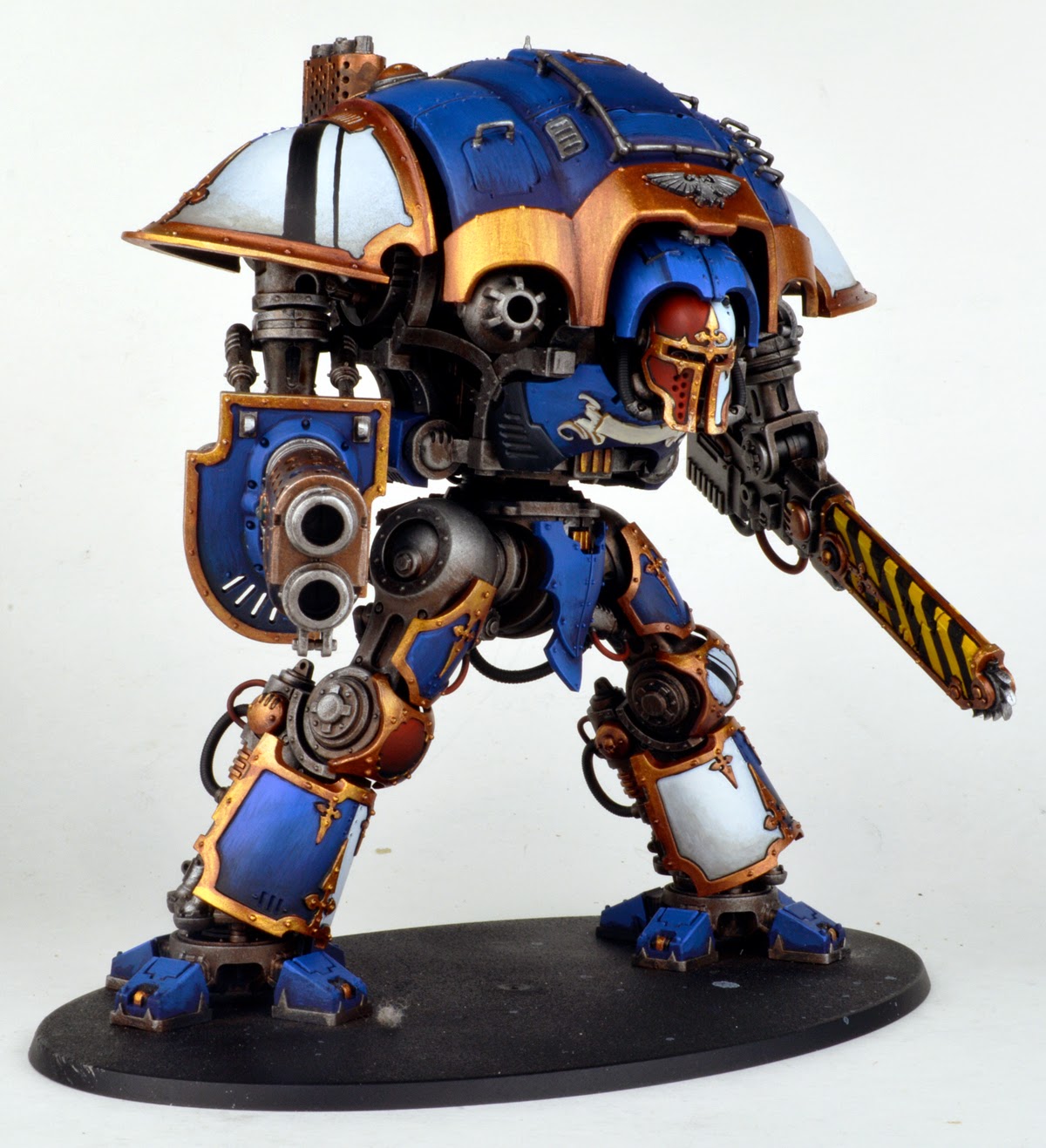 Not much time left before I whole host of things need to be packed up on the truck and shipped out to AdeptiCon. Amongst them are these two Imperial Knights. Here they are in their "dress rehearsal" stages. A little bit of tweaking here and there, decals to add, and their bases to paint and affix them to. 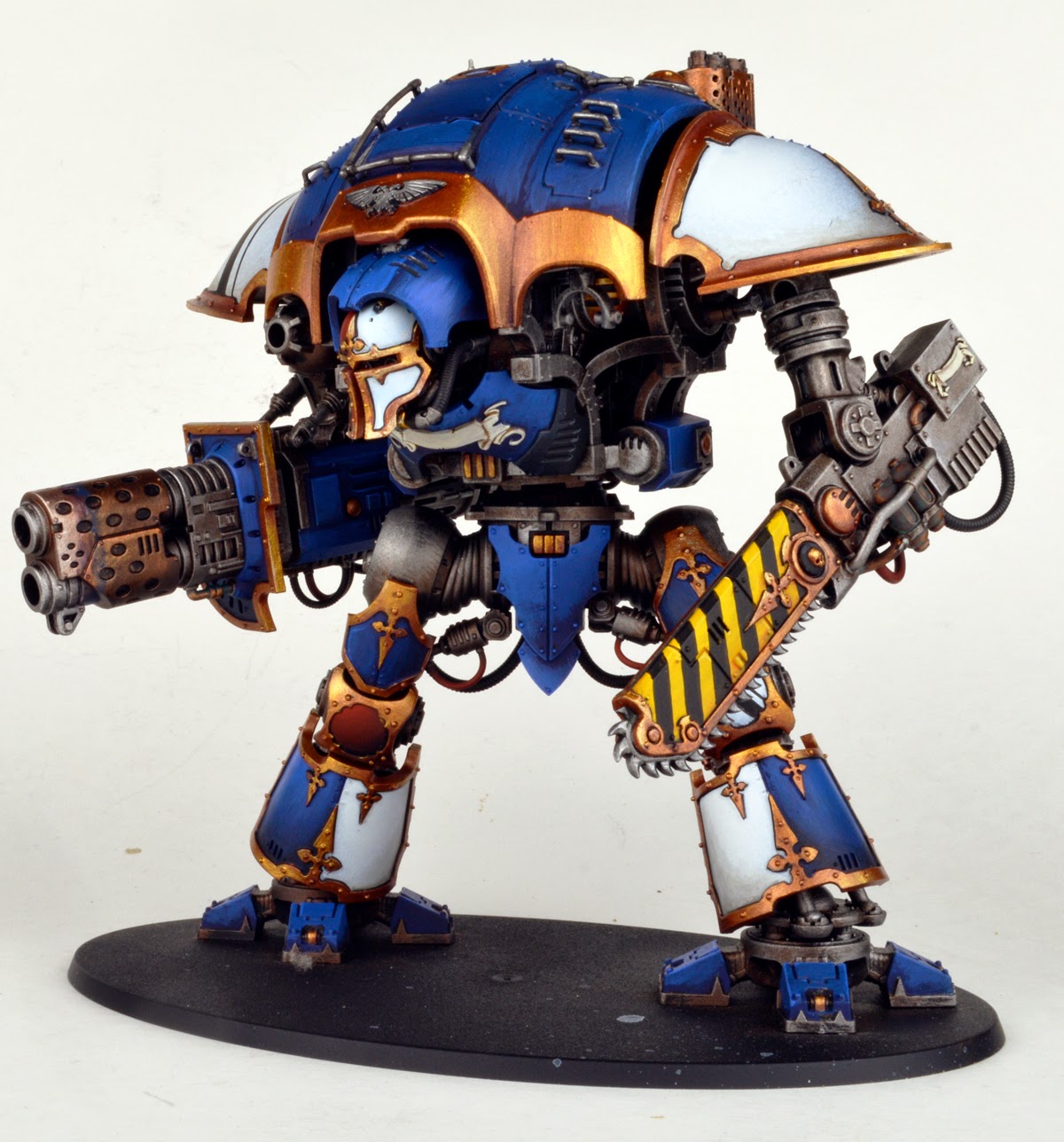 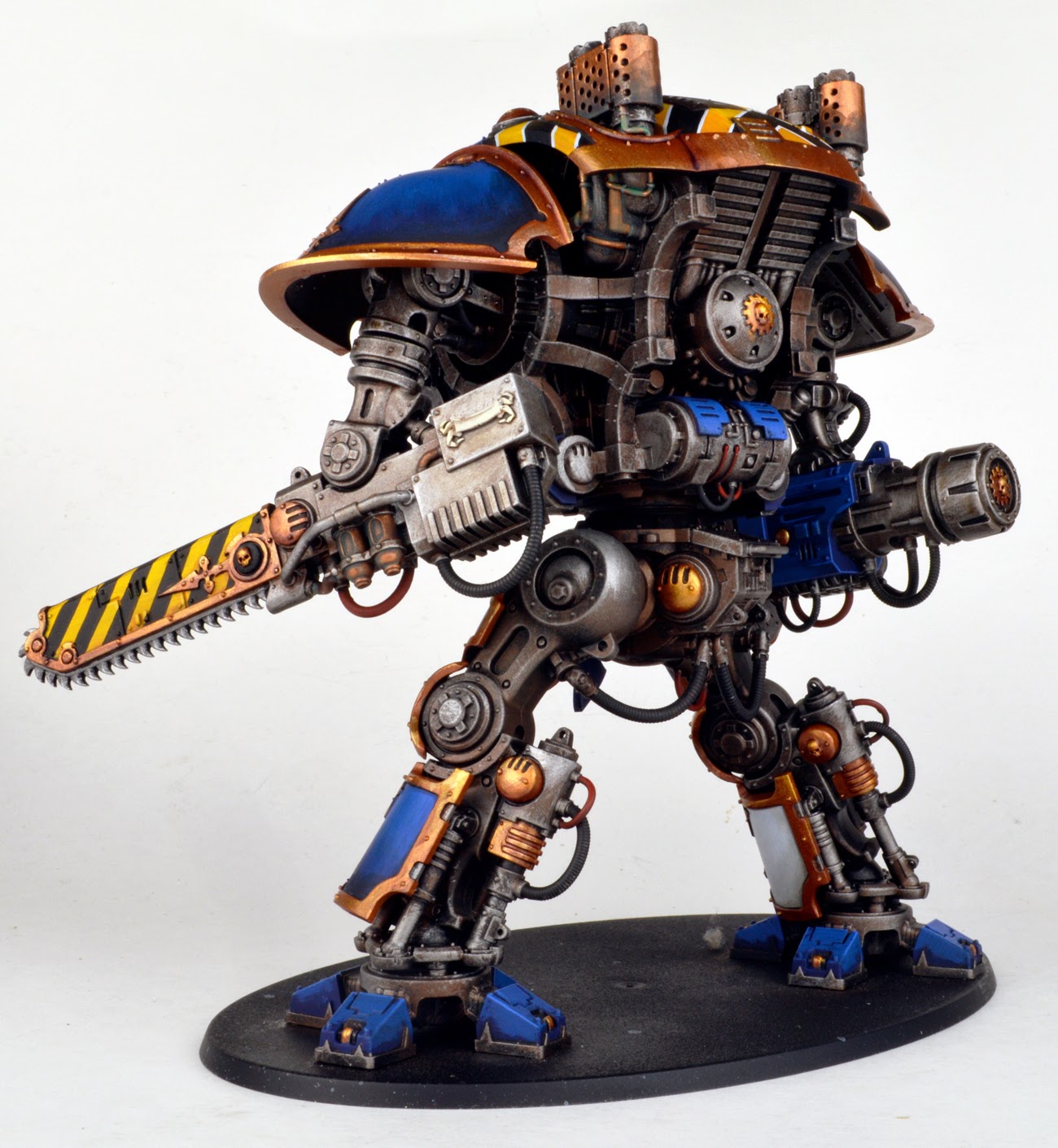 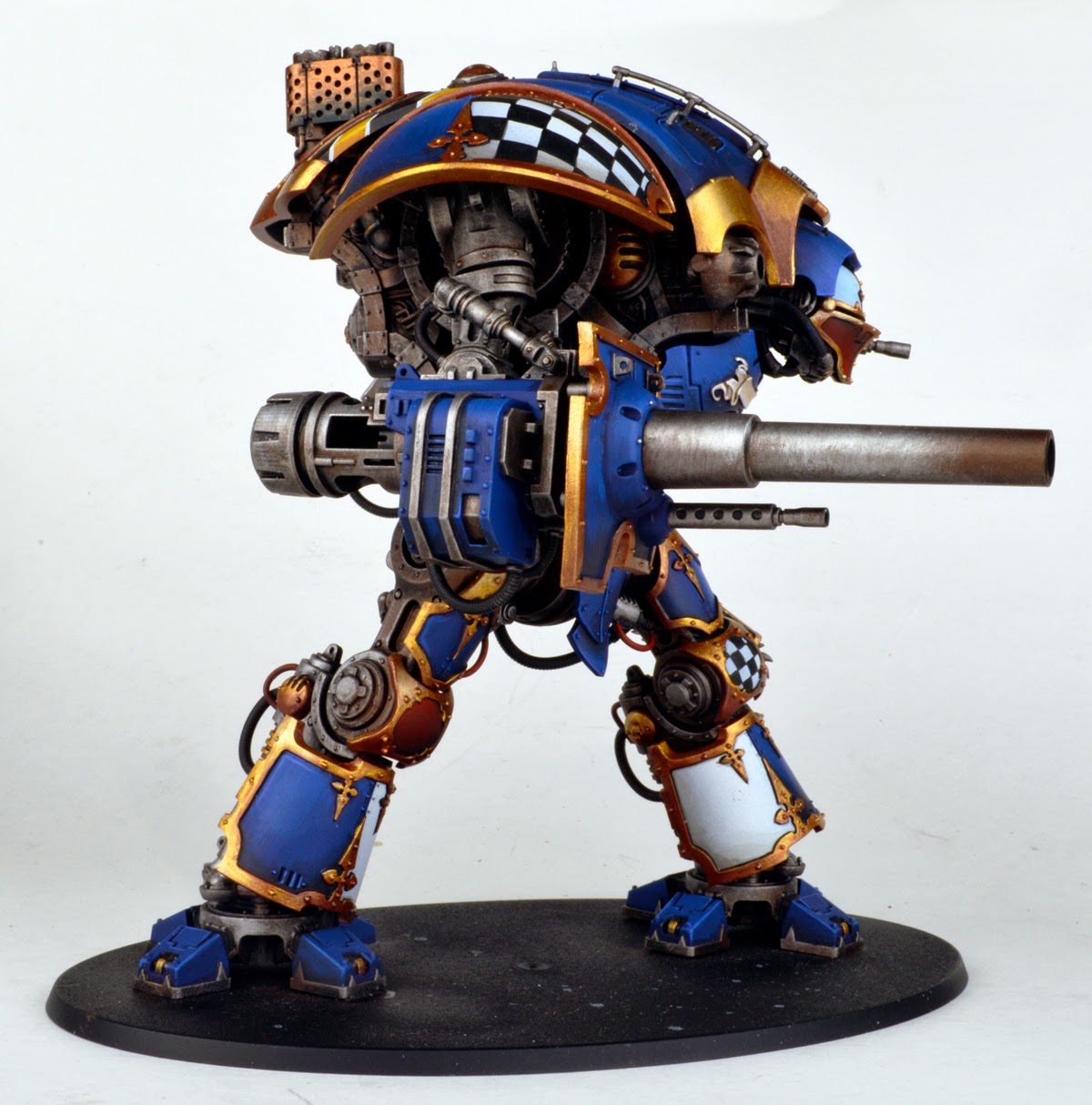 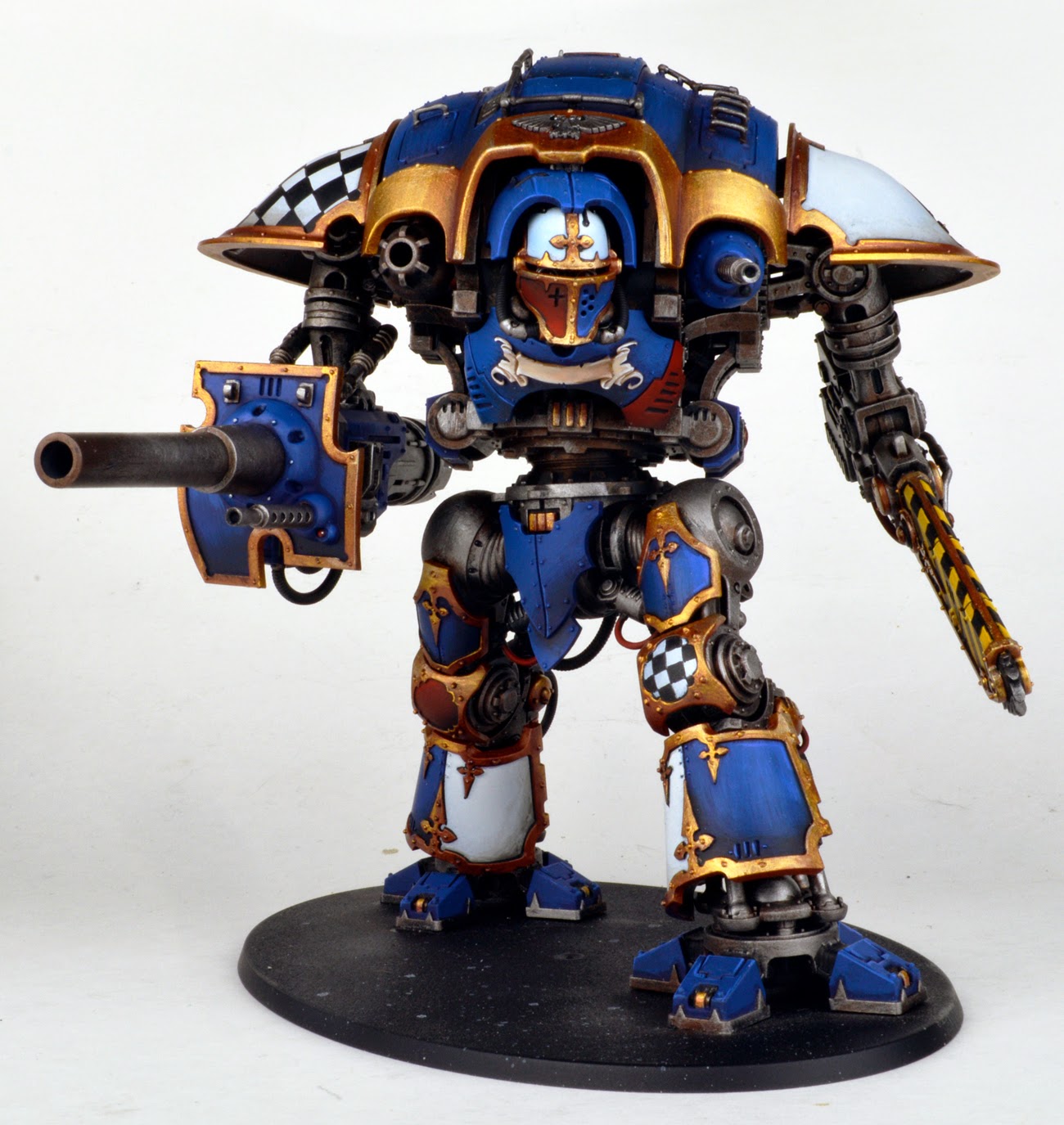 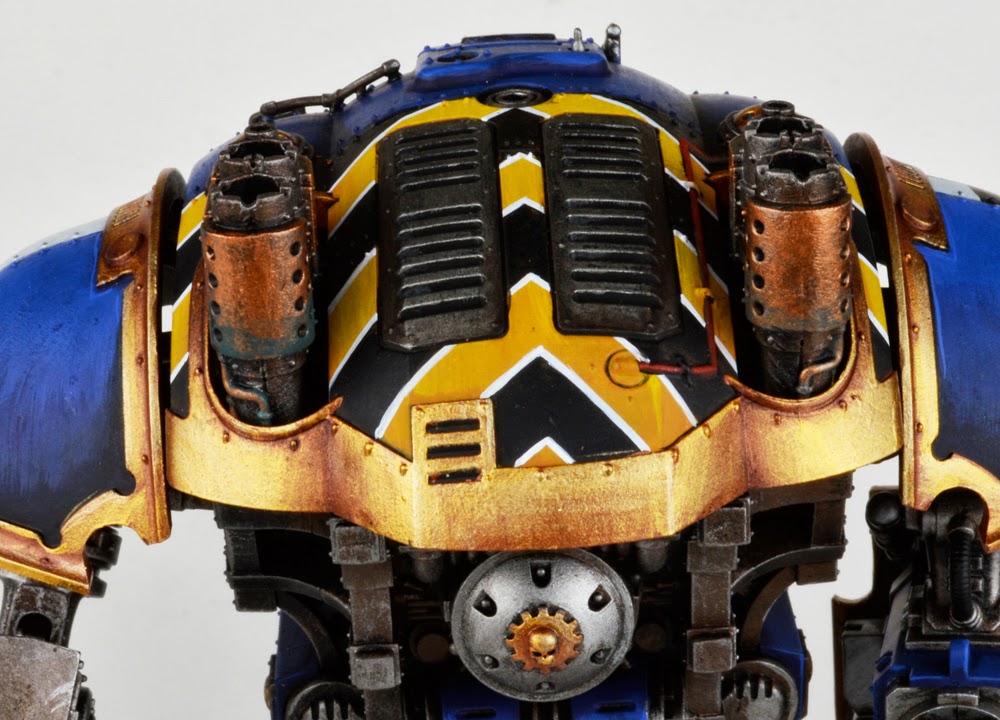 AdeptiCon is soooooo close I can almost smell it ; )

Cheers
Dave
Posted by davetaylor at 11:50 AM 8 comments:

Look what arrived in the mail... 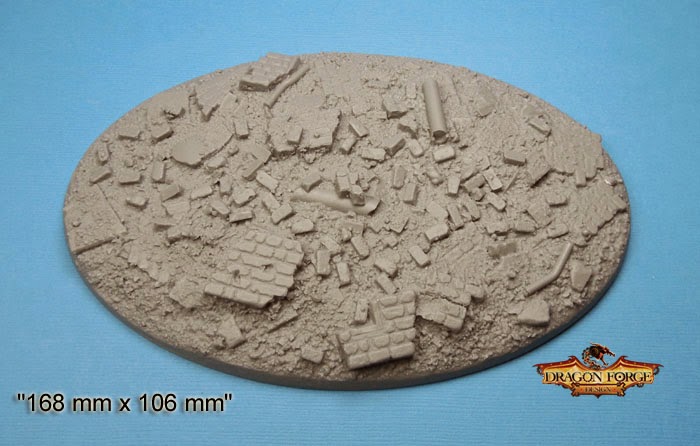 Yesterday, two of these cool bases arrived in the mail from Dragon Forge Design! These are the Urban Rubble bases that will be going under the two Knights I'm working on. I would have taken a photo of them in the flesh, but I wanted to get them primed up and ready to be painted. Not long now until Adepticon! 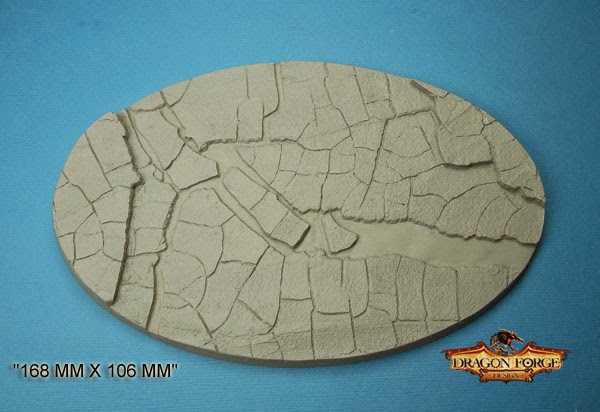 I've also taken a look through Jeff's other Knight base designs, and of the eight different themes currently available, I think this one above (from the Badlands set) is my current favorite. I am definitely looking forward to the Tech Deck version for my Mechanicum Knights.

A little birdie tells me they should be available very soon : )

Cheers
Dave
Posted by davetaylor at 5:19 AM 2 comments: 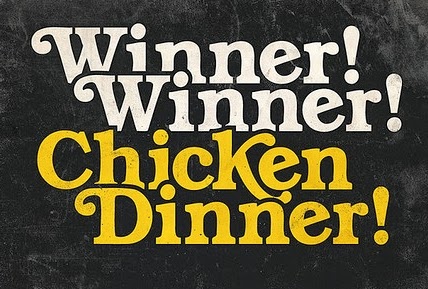 My apologies for not posting this yesterday, but I was struck down by an as yet unidentified lurgy. Anyway, with almost 200 entries (both here and on the DTM FB page) I hit up random.org to generate the winners.

The first winner (and soon to be proud owner of a Battle Foam Malifaux bag) is Joshua Tumbry!

The second winner (and soon to be proud owner of a NIB Izamu) is Mark Liszewski!

Congratulations to you both, please get in touch asap so we can get the prizes out to you.

I'd also like to mention the incredibly wide variety of miniatures selected by you all as your favorites. I think that's a real testament to the quality (and delightful insanity) of the Malifaux range as a whole! Well done Wyrd : )
Posted by davetaylor at 7:05 AM 1 comment: 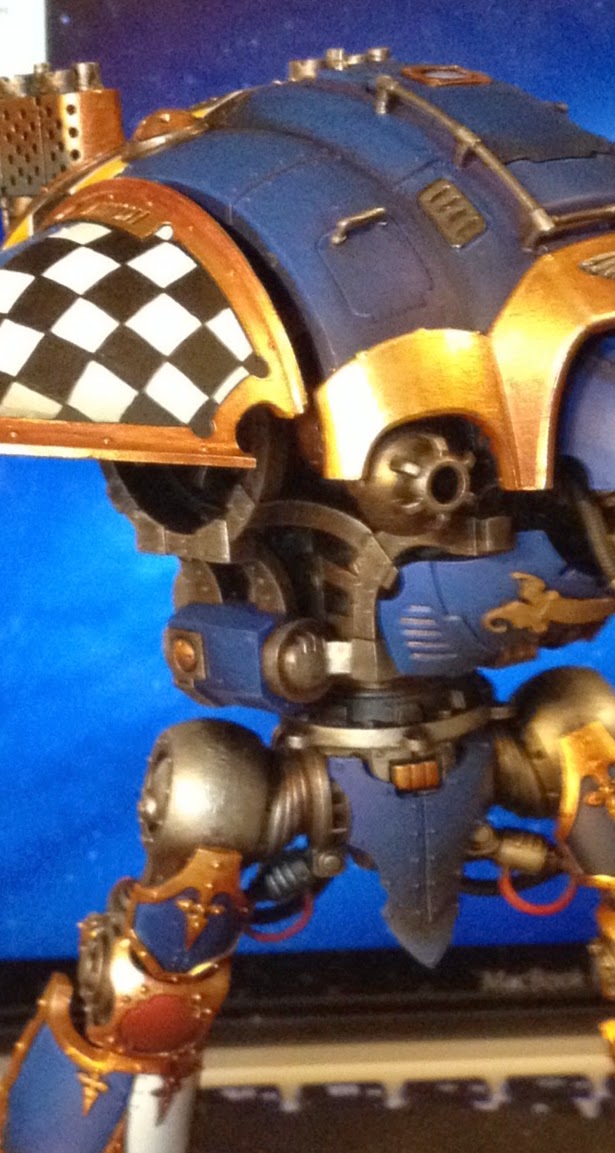 It has been a very busy week. It's amazing how much time you can sink into one of these Imperial Knights, let alone two of them.

PS. Apologies for the poor cell phone photo.
Posted by davetaylor at 8:02 AM 24 comments:

Quick Tip: This is quite a long, but snappy post, with a good pay-off at the end : ) 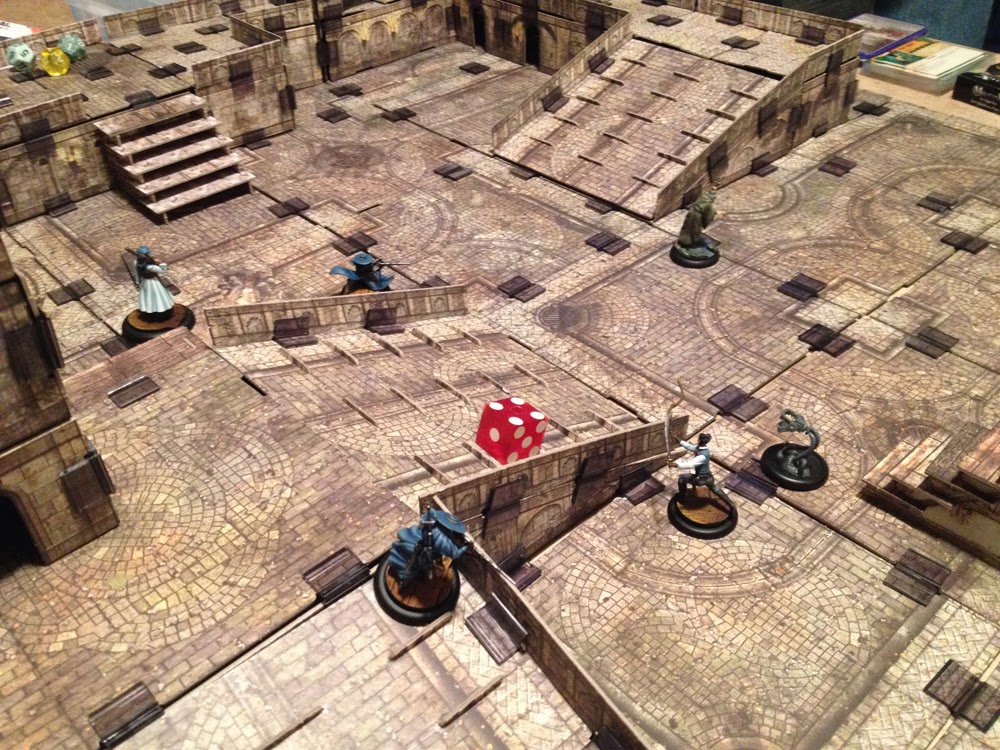 Since the beginning of the year, I've been able to play four games of Malifaux. I've blogged about the experience of the first two games HERE. At the end of that post I suggested that my friend John Swann would likely steamroller me the next time we played.

Well, as luck would have it, I drew John in the very next gaming session we met. I told him about my blog post, we had a chuckle, and then jumped straight into the game.  I won't bore you all with the details of our McCabe vs Yan Lo game, but suffice it to say I was unpleasantly surprised by the abilities of the punk zombies. Basically like throwing a blender into a fish tank.

Anyway, I was also very worried about the abilities of his walking suit of samurai armor (not used as Izamu, but another nasty guy whose name escapes me right now). I was pleasantly surprised when his attacks against Sidir Alchibal (inspired no doubt by Captain Nemo) all missed, and my cards triggered his defensive response. Without even activating, my henchman (Sidir) had taken out John's "tank". The photo above shows the final result of the game. Five of my models stood ready to take down a wounded and lonely Yan Lo. I had developed a plan, learned more about my crew's skills, and had some lucky flips at the right times.

The photo below shows my casualties admiring the view from their tower. 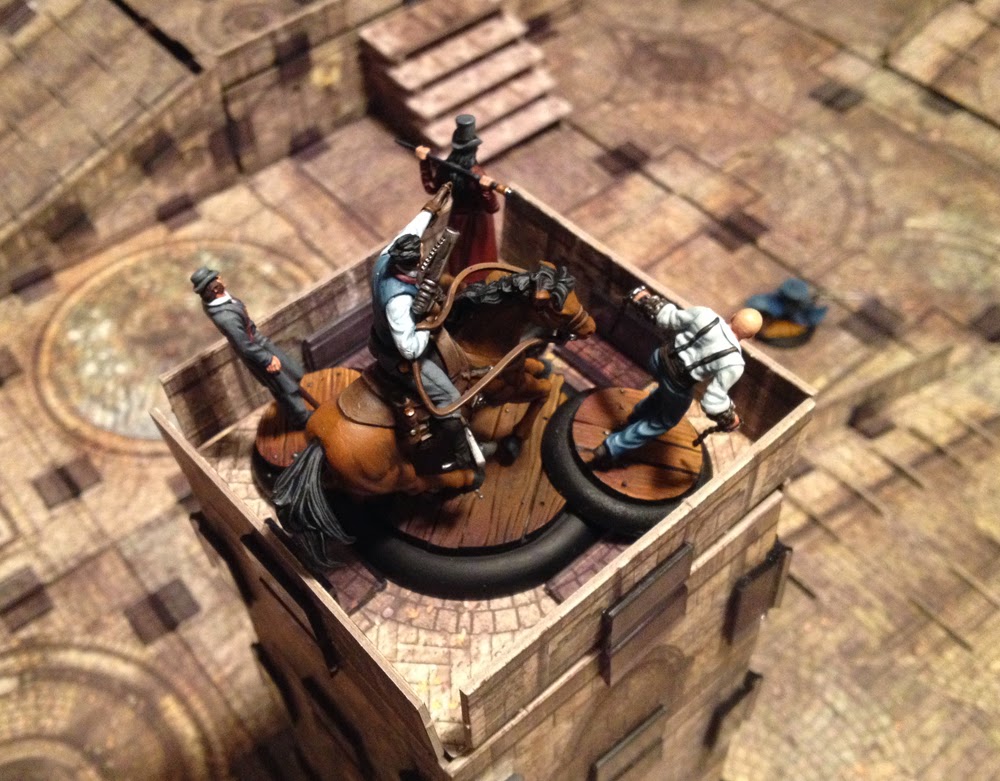 Of course, that sweet taste of victory would not last long. At the following gaming session, as we had all played each other before, we drew cards to pair up. Lo and behold, I found myself across the table from John Swann again! My crew was exactly the same, John's was similar, but with a few important differences. Our table (below) had a few more LOS-blocking pieces of terrain too, something that would play an important role in my eventual downfall. 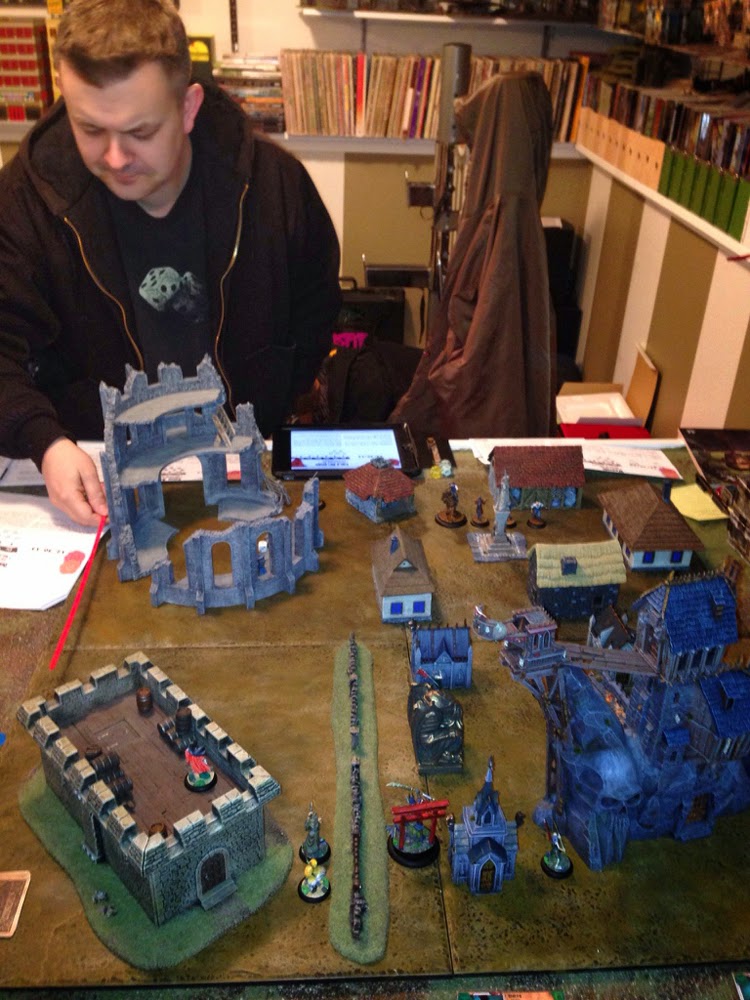 I tried to refine my plans, working with a slightly different grouping of models - surrounding McCabe with the Wastrels to try and keep him alive longer, and putting Sidir and the two Riflemen together for a solid base of fire. My initial net gun attacks worked incredibly well, paralyzing the focus of John's crew, Izamu (the real one this time).

John had learned, however, and even though I constantly gained the initiative each round, I was unable to neutralize the threat, and John slowly whittled down my crew until I was completely ineffectual. 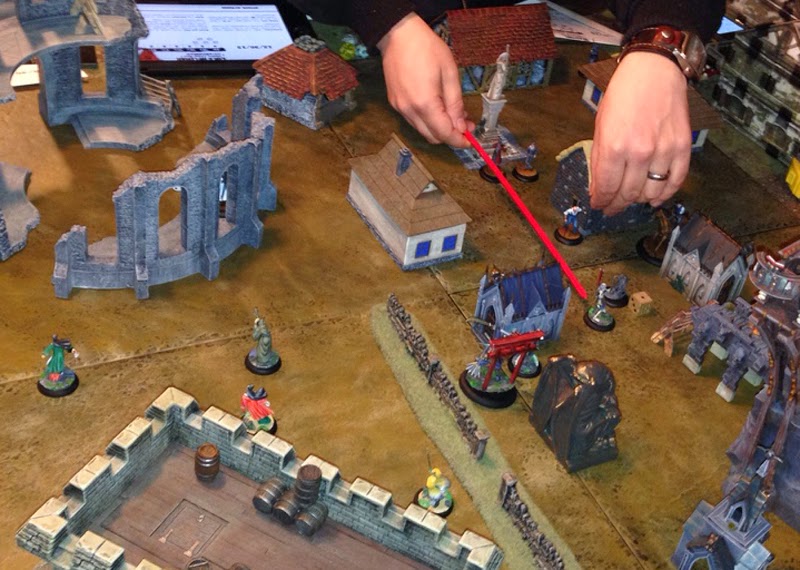 So, on to the next portion of this mammoth post, the Interview.

As you may remember from this post earlier in the month, I have recently started my own business providing all manner of services to other businesses in the wargaming industry. In order to help me promote that business, Romeo Filip invited be to be the guest on the next 40KRadio podcast (out today, if I remember correctly). We chatted for a long time about various things, including some of the services I can provide, but of course it always comes back to toy soldiers.

We chatted about my recent dabbling in Malifaux, and out of the blue Romeo offers to send me a Battle Foam Malifaux bag (shown below) to give away in a promotional competition! 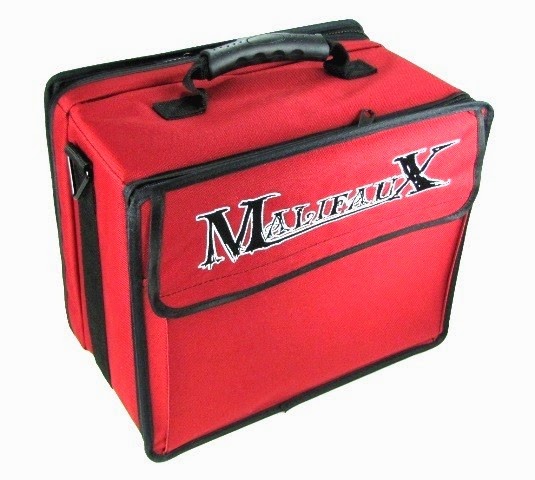 Obviously I said yes, so this is where we move into the Facebook and Competition section of the post.

Last night I launched my company Facebook page - Dave Taylor Miniatures. This morning I have put up a competition post. All you need to do to enter is one (or both) of these two things:

2. Come back here and leave a comment naming your favorite Malifaux model.

That's right, you don't have to go to Facebook if you don't go in for that sort of thing, but folks who do can basically get two entries into the competition. The competition will run from now until next Friday, March 21st, at 1pm EDST, when I will randomly select the winner from those who have liked and commented here and/or there. I'll announce the winner here and on my FB page and that person will have two days to get in touch. If they do, I'll ship them the case free of charge, and if they don't, I'll draw another winner.

I'll also randomly select a second winner and send them a "new in box" version of the model that seems to be fast becoming my nemesis - Izamu the Armor! 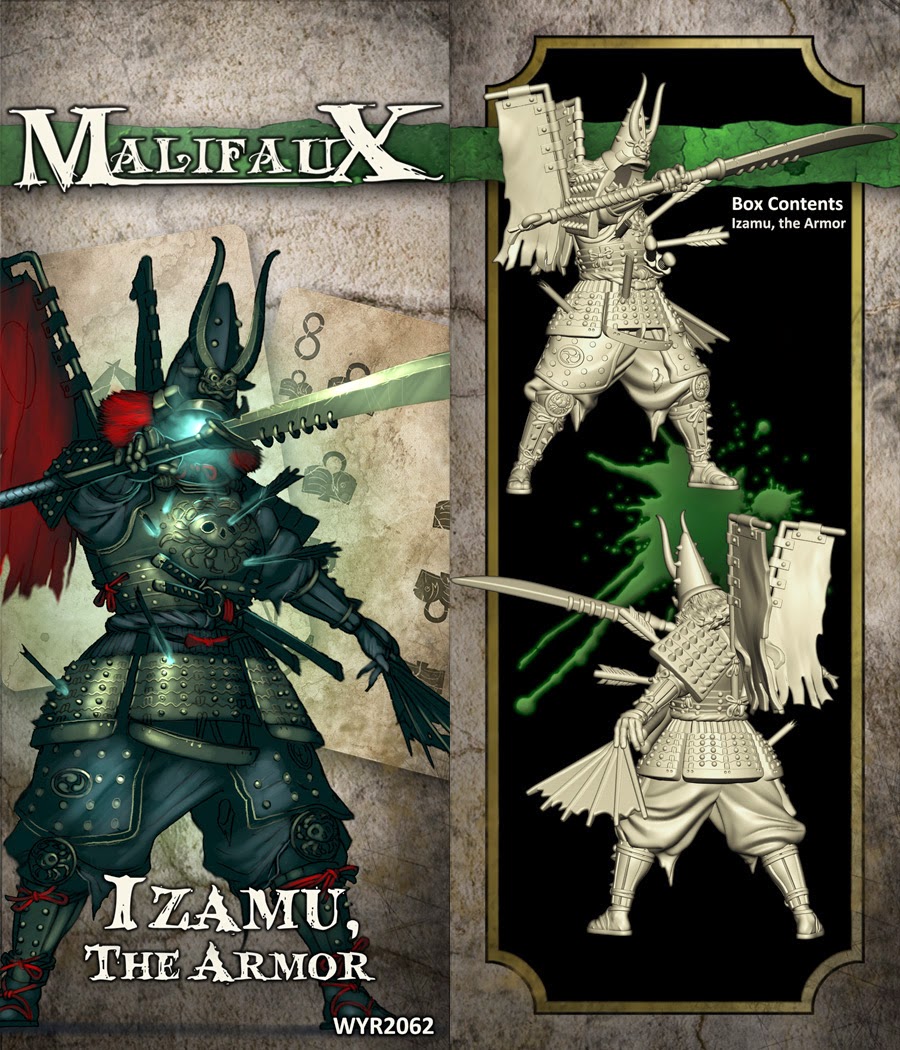 Cheers
Dave
Posted by davetaylor at 3:43 AM 70 comments: 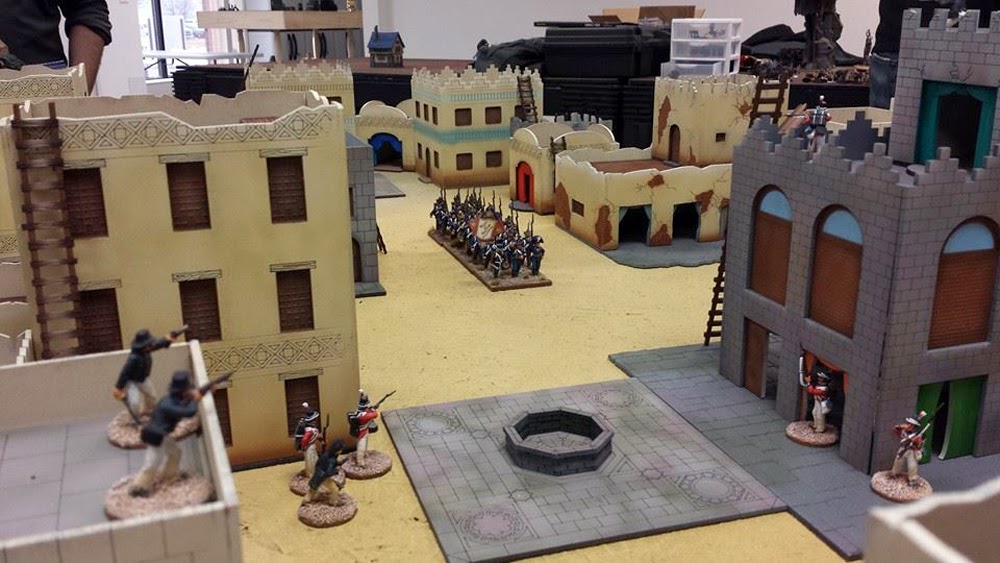 It has been some time since we've posted on the Guns of April blog, so I thought I'd help boost the signal. Please head on over and check out the cool buildings we've been working on for AdeptiCon : )

Alexandria wasn't built in a day! 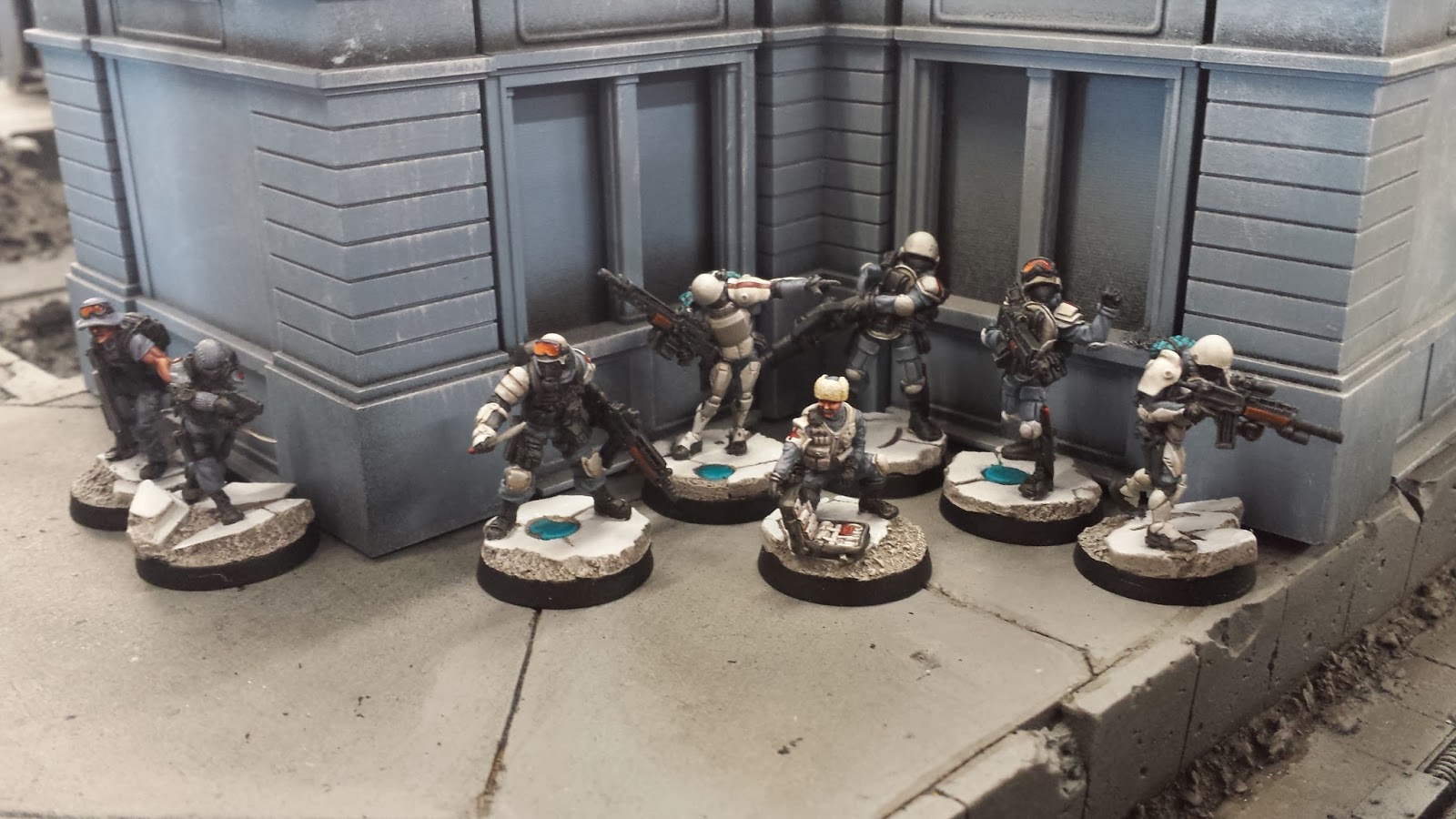 Over the weekend I was able to drop these Infinity models off to my client (and friend) Brien. He was pretty stoked to get them, and immediately started snapping shots on the urban terrain at Titan Games & Hobbies, a very cool store just north of Baltimore, MD.

You've already seen the first four of the group, above, so here are the other 13, in no particular order. 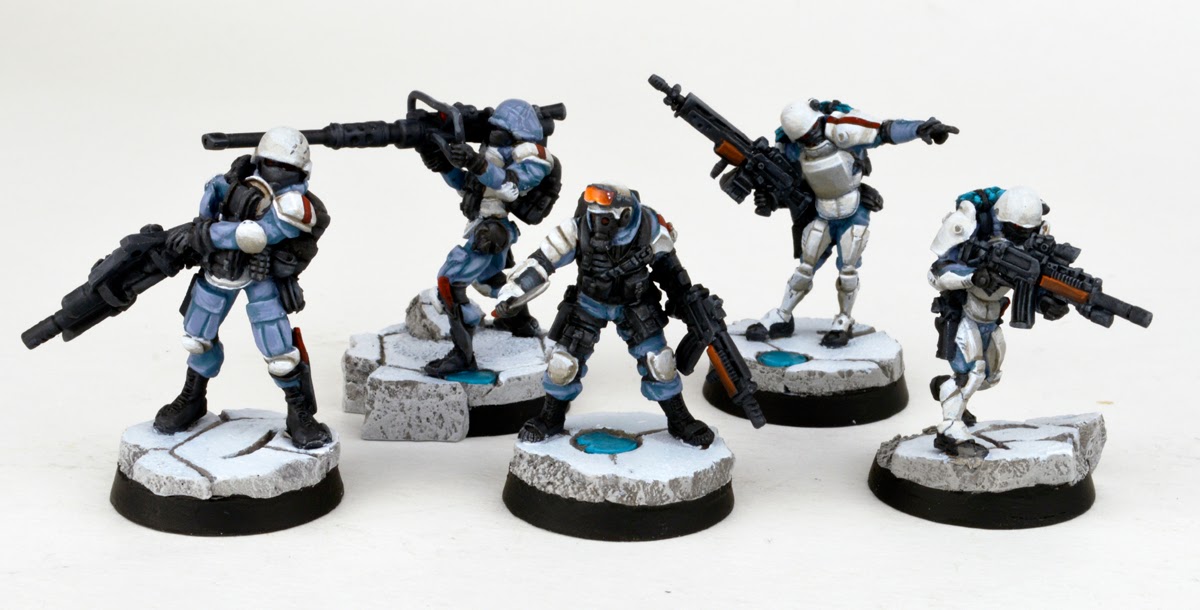 After my last post I had a couple of people ask for the recipe I used for the flesh, especially on Van Sant's well-muscled arms. Well, here it is:

It's a bit of work, but there wasn't a great deal of exposed flesh in this group, so I could afford to splash out on it.

Cheers
Dave
Posted by davetaylor at 4:00 AM 3 comments:

Photographing miniatures can be tough! 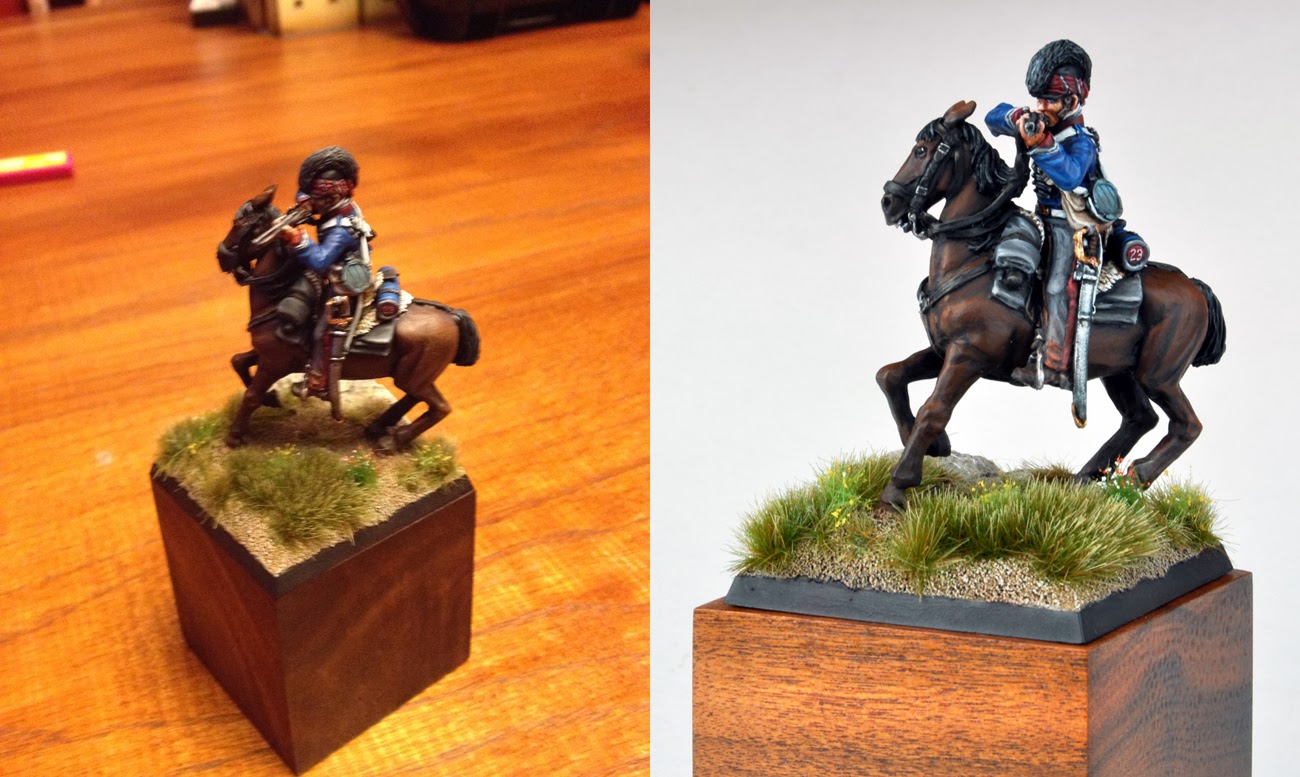 Just a quick note this morning to make sure all readers that are heading to AdeptiCon in April are aware of some great classes being run by my friend Thomas Wynn.

As we all know, photographing our toy soldiers can be difficult at the best of times. Many bloggers go with the "picture on the left" approach, unaware that the "picture on the right" approach is within their grasp. Thomas began photographing artwork before the advent of digital cameras, and has a deep understanding of the photographic process. He has also been teaching classes like this for many years, so can deliver the right information to you succinctly. Thomas is certainly the guy I turn to for advice!

I urge you to check out his classes, and sign up for them before the AdeptiCon web cart closes this Friday (March 14). Click on the links below to take you to the cart.

See you all at the show!
Posted by davetaylor at 6:10 AM 1 comment:

Over the last 20 years I've had the good fortune to work for the two largest wargaming companies in "the industry". I have recently decided to resign my post as US Editor of Wargames Illustrated to pursue a future in helping smaller companies bring new product to market, and promote their existing products as well.

To that end I've started up Dave Taylor Miniatures, a small production studio that means I'll be able to work on a lot of great projects with a lot of great people. I hope to bring my years of experience and decades of enthusiasm to every task ahead of me.

My blog will undergo a few small changes in the coming weeks, and the links here are to my "resume" site - davetaylorminiatures.com, which won't really change too often. If you are interested in the services I'm offering, feel free to shoot me an email via my contact email on the site.

I'm very excited about the possibilities! 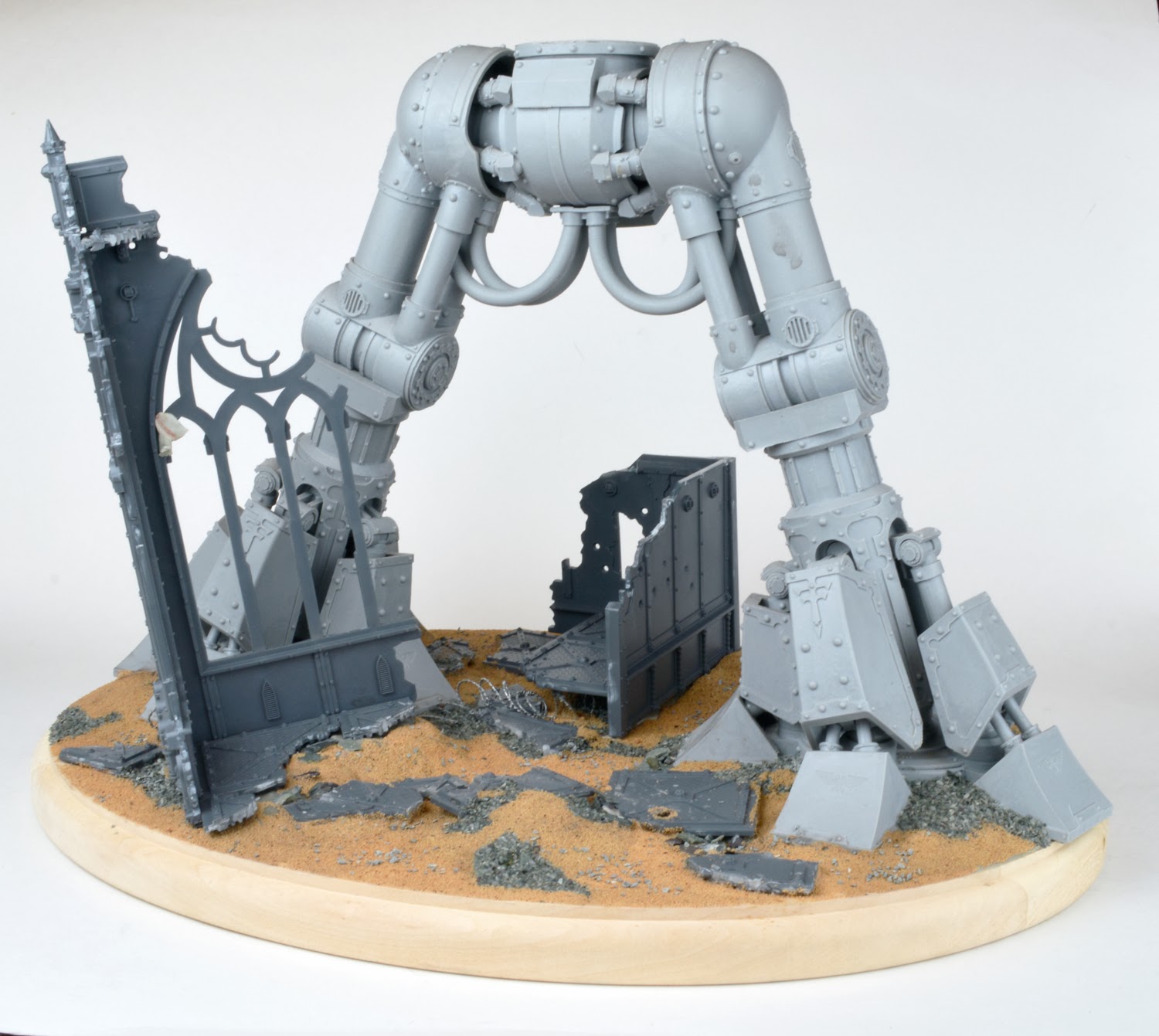 And never fear, my Titan is still under construction. Here's a shot of the base and legs. These have since been primed : )

Cheers
Dave
Posted by davetaylor at 4:00 AM 36 comments: