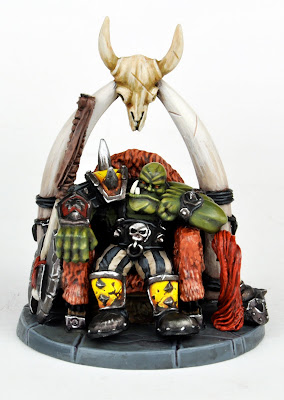 When I woke up this morning I had a message from a mate of mine in Australia, a mate that is traveling from Australia to Chicago to attend Adepticon. That message simply read "Are you ready, big boy?"
I actually found it a rather fascinating question. Although the "big show" is mere days away, I realized I'd done little (actually nothing) to promote it on my blog as I've done in previous years. I guess my lack of promotion must have worked though, because Hank and the crew are expecting over 1,500 hobbyists of all stripes over the upcoming weekend.
One of the cool things I have done in preparing for the show is to paint up Warlord Crom (see the brooding Orc warlord above, more shots here). This figure (sculpted by Gary Morley) is the "Fantasy" figure for this years uber-mega-crazy-swag bag! This sculpt and the 1,000 or so that are being handed out at Adepticon have been donated by Battlefront/GF9. Pretty darn cool.
In years gone by you'd get a single show figure, plus a cool GF9 doodad, and maybe a few discount coupons for various aftermarket companies. This year, however, will be the grandaddy of all swag bags. I'll show you the loot in a post next week.
Anyway, on to some real content. As I'll be taking lots of photos at Adepticon this weekend, I took my lights up to Delaware to send them out on the truck. This means I'll be without my lights for just over three weeks (this week, next week while Joe stays in IL for Little Wars, and the following week while I'm in the UK for Salute - yeah baby!) To tide me over for content during that time I took a huge batch of photos on Sunday. So, while you won't get up to the minute material from me, you will be getting something.
The Long March Home
Here's a fun little Napoleonic project I've picked up as part of our July issue theme content (for those who've forgotten, I work for Wargames Illustrated as the US Editor). The theme is "The Eagle against the Bear: Napoleon's Invasion of Russia". We're looking at the French army's advance into Russia, the Battle of Borodino (in two scales and scopes), and the retreat of Napoleon's shattered force back to Paris. While checking out a bit of stuff online and in some great books I've picked up over the last few years I came across a great piece of Keith Rocco artwork titled White Misery. You can check it out here.
This piece inspired me to dig a bit through the ranges of various manufacturers looking for Russian grenadiers I could paint up in the same way. Unfortunately while there are a few ranges of Russian grenadiers and Russians in greatcoats, and even Russian grenadiers in greatcoats, I couldn't find any Russian grenadiers in greatcoats at the charge. So I switched to the French, figuring the had to be swaddled up as snugly against the fierce Russian winter. 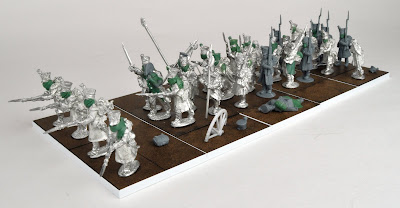 The Perrys make wonderful miniatures. In this case they made models that would be just perfect to reflect a hard-worn, rag-tag, dreadfully cold battalion of Frenchmen desperate to get back to Paris (and warmth). Using a mix of metal and plastic fusiliers, grenadiers, and voltiguers, I clipped somethings away and added a bit of greenstuff (chiefly as scarves keeping the chill wind from their starving faces).

I also took this opportunity to try out the "dynamic basing" ideas Pete Brown had espoused (and Matt Parkes had made reality) in the WI280 article "Back to Bases". 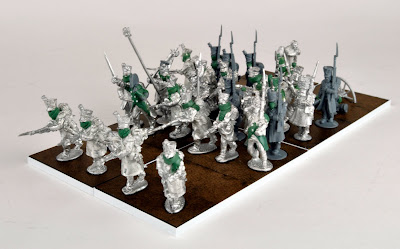 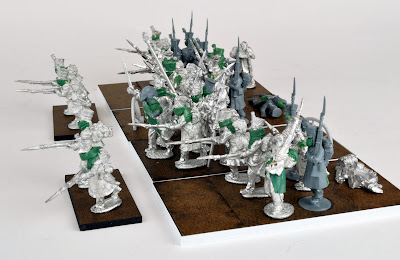 I have a few painted examples (voltiguers and grenadiers) that I'll show off later. The wole thing can be seen in Wargames Illustrated 285 (July cover date).
Cheers
Dave
Posted by davetaylor at 5:48 PM 11 comments:

A couple of posts back, I showed you the Space Marine characters that I'd built for the Deepstrike Radio Flood Appeal. Well I haven't been idle, just caught up with a few other things.
Here they are in their painted glory. First up is the Chaplain from the Raptors Chapter. 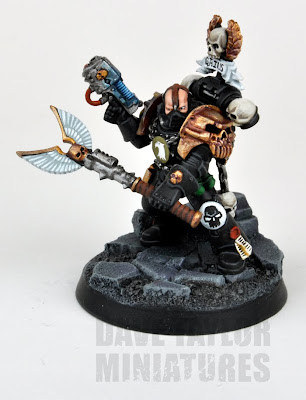 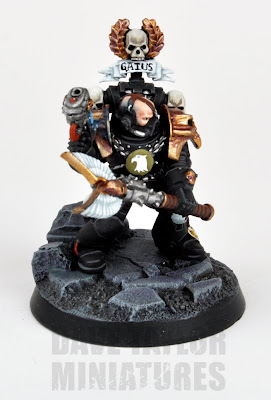 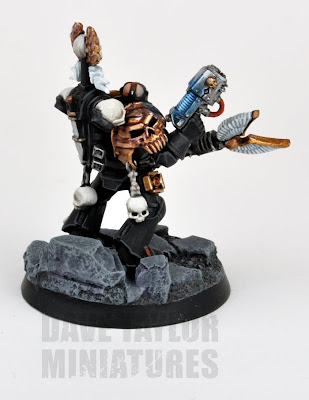 And here's the Librarian from the Blood Ravens Chapter. I hope you (and the auction winners) like them. 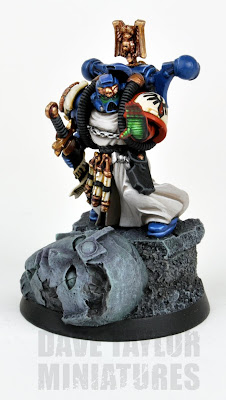 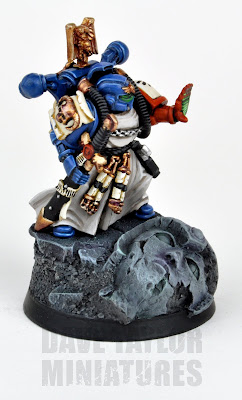 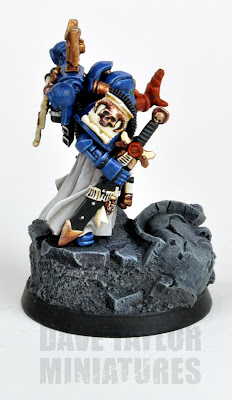 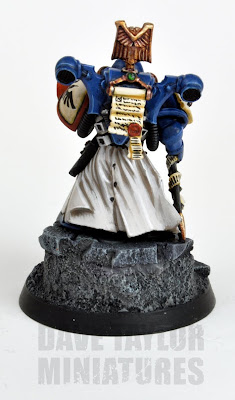 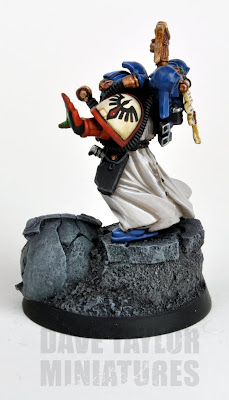 Email ThisBlogThis!Share to TwitterShare to FacebookShare to Pinterest
Labels: Charity 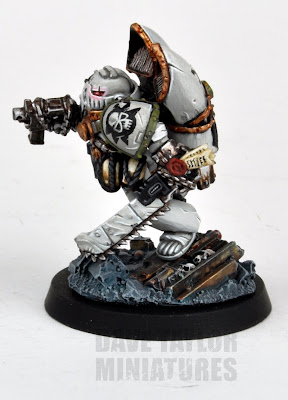 Quite a while back (2006, I think), I built and painted this Pre-Heresy Death Guard assault marine. It is based on a lovely piece from the Horus Heresy artbooks from Black Library. I entered it at the Golden Demons that year and won a silver trophy in the Staff Single Miniature category, beaten out by my friend Jake.
I was enthusiastic about Death Guard at the time, so I built a 1000 point force to take to Adepticon 2007 as part of a Pre-Heresy themed force (including World Eaters, Emperor's Children, and Thousand Sons) 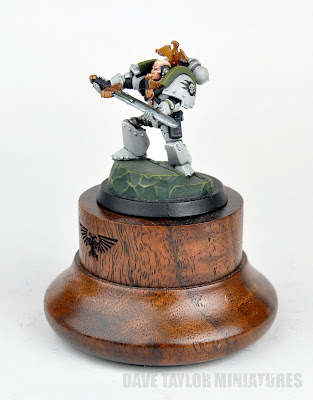 Building that force, then reading Flight of the Eisenstein, made me want to build a Nathaniel Garro, which I entered in the Open category of Golden Demon in Chicago that year. I didn't place but I was deeply satisfied with the posing of the model. I wanted the moment captured to be the one where Garro, tired of having his loyalty questioned by Rogal Dorn, presents his own sword - Libertas - to the Imperial Fist primarch and basically says "Look, if you don't believe me, take my sword and cut me down now. Stop wasting my time and yours." 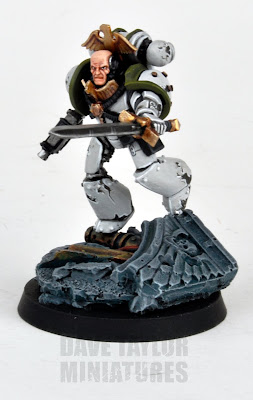 Well, some time last year - back when I was still taking commissions - I accepted a job to build Garro in a similar style, but much more dynamic. With Libertas outstretched and his new bionics getting a workout, the future of the Inquisition prepares to bring swift death to Humanity's foes.
With the pending release of the Grey Knights I figured it might be a good time to cast our minds back to the earliest days of the Imperial Inquisition. : )
The Emperor Protects.
Posted by davetaylor at 12:24 PM 9 comments:

Some of you may remember a few weeks back when I mentioned I was offering up conversion and painting of a Space Marine character for each of the armies being auctioned of by Deepstrike Radio for the Queensland Flood Relief Appeal (see post here).
Well, after the two auctions finished, Chris contacted me and let me know the winners wanted a Librarian and a Chaplain respectively. 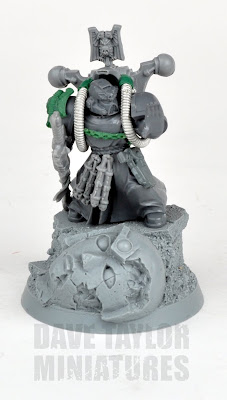 This guy's a Librarian for the Blood Ravens Chapter. Inspired a bit by Thomas Schadle's excellent model that won a Slayer Sword in LA back in 2005, I also took the opportunity to try out the Instant Mold material that I picked up last month. When I put up painted pictures you'll be able to see the nice horned skull and scroll molded from another Librarian's shoulder pad. 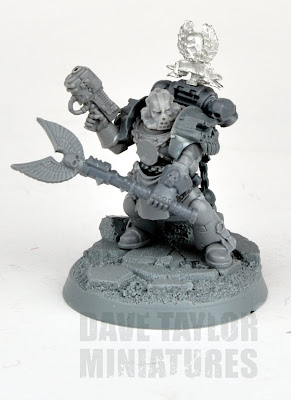 And this guy will be a Raptors Chaplain. Since the release of the plastic Chaos Knights a few years ago, I've wanted to use the cool skull shoulder plates on a Chaplain model. This was the perfect opportunity. This model is really just a kitbash, but it involves parts from 9 or 10 different kits. Sometimes it's good to have an extensive 'bitz box'.
The bases for these two models are from Dragon Forge Design's Lost Empires range. 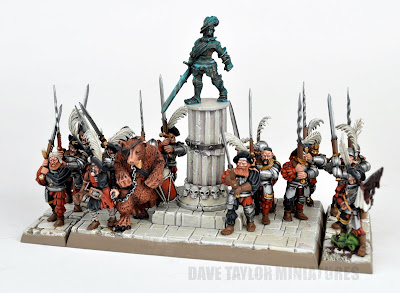 Finally, here's an update of where my Greatsword unit is at. Just the Champion and Standard Bearer to add to the big base, then eight more models to finish off the unit. I hope you like where it's heading.
I'm off to Cold Wars tomorrow for work so I don't think I'll get much hobbying in over the weekend. Hopefully I'll be able to scrounge up enough for a post or two next week.
Cheers
Dave
Posted by davetaylor at 7:26 PM 7 comments:

Driving a chariot down memory lane 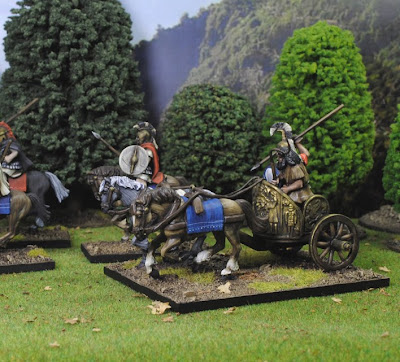 Well, early this week my friends at Gorgon Studios sent me a couple of shots of a painted version of their next release, the Etruscan chariot. I was very excited to see the paint job Dave Pauwels had put on this ancient war machine. Why so excited Dave? We've never heard you express an interest in Etruscans before...
Well, let me tell you a little secret. 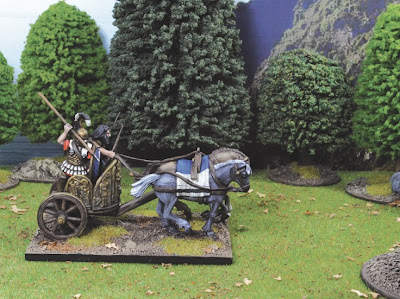 About 18 months ago, Hank and Dave approached me with a little challenge they thought I might be interested in. As part of their developing Etruscan range of miniatures, they wanted to include a chariot. The freelance sculptor they work with, Steve Saleh, is great with sculpting models of all historical periods, plus sci-fi and fantasy figures (including the latest Empire State troopers from GW, some of my favorites). While he loves the organic flow of cloth and flesh, he's not too keen on "straight line work" as it's know in the trade (apparently). Enter the guy who loves to work with plasticard and straight line conversions and scratch-builds.
That's me.
So, after taking a look at the source images that Hank and Dave showed me from the Metropolitan Museum of Art, we started talking about a few changes we'd need to make to some of the proportions to take the perceived "ceremonial chariot" and turn it into a two-man fighting platform. Note: There's a little bit of debate in the ancient scholarly world as to whether or not the Etruscans ever used chariots in battle, but Gorgon wanted to give it a go anyway.
With some careful cutting, measuring, cutting again, carving, and a smidge of putty work, I was able to come up with the basis for their chariot. Steve Saleh was the man who added all the organic detail to the chariot, the intricate bronze bas-relief work, as that's a bit beyond my current sculpting level. Just over a year ago, I handed over my completed "masters".
Here are some photos I took once the work was done. The horses and stand-in "crewman" are from Gorgon Studios' Etruscan range, sculpted by Steve. 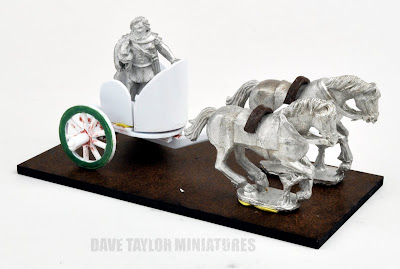 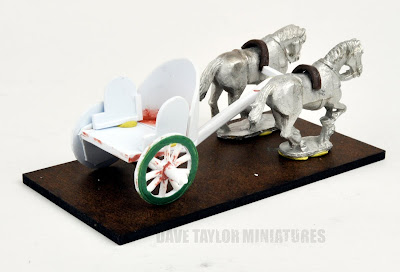 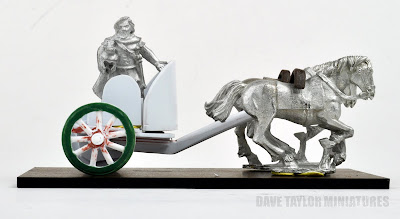 Below you can see the parts I provided for casting. You may notice there's only one wheel. That's because in the master molding stage they can create multiples of the wheel to go into the production molds. There was no may I was going to try and build two of these nine-spoked wheels. An odd number of spokes makes the whole thing very difficult build, and apparently it was a feature peculiar to the Etruscans. Lucky me. 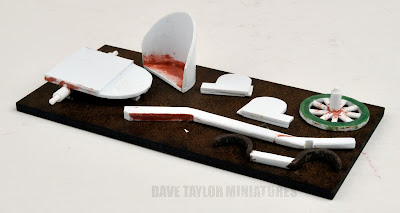 So there you have it. I'm pretty darn stoked to know that a project I worked on for a few friends has now, after being considerably embellished by a sculptor I'm a big fan of, is about to reach the real world market place. There's something about seeing the words "This elegant machine of war was designed and sculpted by Steve Saleh and Dave Taylor" that has me tickled pink.
If I can get a hold of one before Adepticon, I'll try and get it painted up in time for the painting competition.
Cheers
Dave
Posted by davetaylor at 7:24 PM 10 comments: 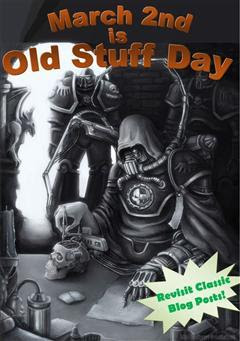 Rob, over at Warhammer 39,999, posted a few thoughts about the tragedy of blog posts that fall into the abyss after being checked out by faithful blog readers, posts that are still worthy, but will probably never again see the light of day. You can read more about Rob's thoughts here.
I think it's a pretty cool idea, so I thought I'd dredge up some of my favorite posts chosen from the largest of the tags in my cloud.
Blood Pact:
Chaos Star Tutorial
My Stalk Tank Completed
My Blood Pact Army
Charity:
Doing the Right Thing
Storm Wardens!
Napoleonics:
My British army in the Peninsular
Highlanders
Pre-Heresy:
Horus Lupercal
Konrad Curze, The Night Haunter
I hope you enjoy a stroll back through some of my favorite posts, and it inspires you to take a look at some of the older posts on other bogs you may have just stumbled across.
Enjoy "Old Stuff Day" to the full!
Cheers
Dave
Posted by davetaylor at 9:22 AM 4 comments: