The Display Board of Morr (and AoP qualifier tomorrow) 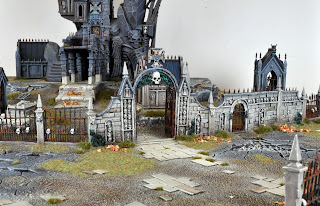 I've just wrapped up the last models for the Armies On Parade in-store qualifier, so I'm all ready to go tomorrow. Unfortunately Mike, the store manager, let me know that no-one else has mentioned bringing in an entry, so my army might be lonely on the day. Of course, the store will be full of folks in a 40K mood, so I guess we'll see how it all goes down.

Anyway, here are a few more photos of the board. Thanks again to the guys at Dropzone Games for their sponsorship! 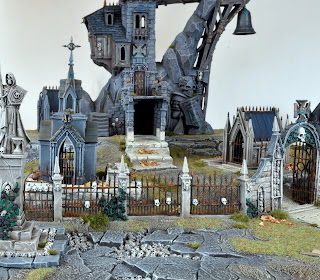 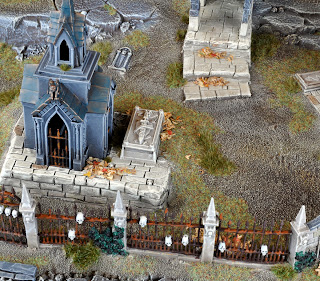 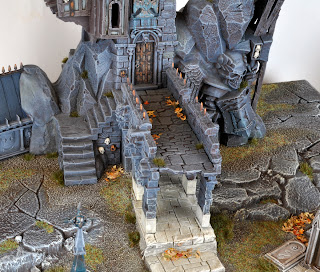 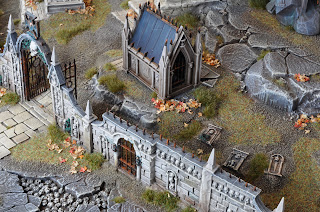 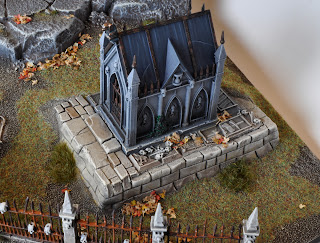 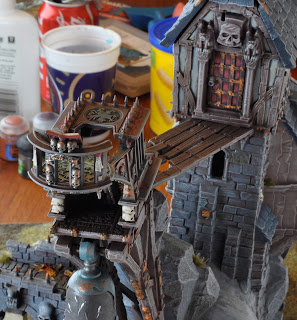 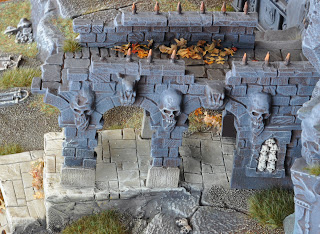 And if you'd like to see the army that'll win at Games Day Chicago in four weeks time, check out James Wappel's army here. ; ) 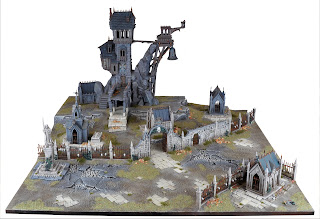 Well, after wrapping this up at lunch yesterday, I was able to get a couple of photos last night. Just a taster to show you this morning. I'll post up a few more pics later on. 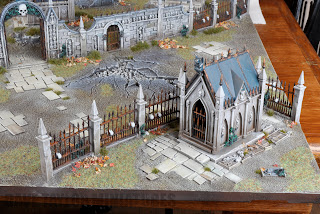 The tufts of grass are from Silfor, the flock is GW's Scorched Grass, and the cool leaves on the ground are a mix of the Brown and Fall leaves from Secret Weapon Miniatures.

Cheers
Dave
Posted by davetaylor at 6:56 AM 23 comments:

Artillery Train of Nuln in WD (and a list) 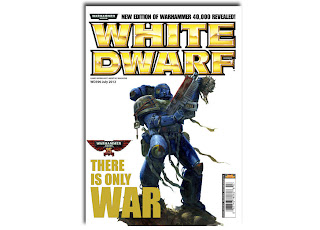 Well, I was quite delighted to find my Artillery Train of Nuln army (from last year's Armies On Parade) made it into the "6th Edition Release" issue of White Dwarf. After 103 pages of non-stop 40K action, my humble army gets to be the Warhammer speed bump. I was also amused when a friend pointed out that it was the only Warhammer content in the issue. So, rush out and grab yourself a copy ; )

While at War Games Con over the weekend (which was very good, by the way), I managed to start and finish off Leitpold the Black. I even got him entered in the painting comp, but I'm not sure how he did as I had to leave crazy early on Sunday morning. If anyone knows, feel free to drop the info into a comment below.

So that leaves just a few pieces to go. Here they are in the order I expect I'll try to get them done:

If I have anytime after that it'll be all about adding grave diggers and so on to fill out the scene.

Off to Austin, TX! 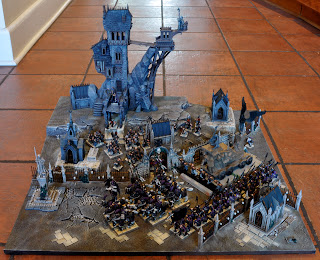 Just a quick post to show you all there has been progress on the display (and other elements). I'm now packing to head out to WarGamesCon in Austin, Texas, where I'll be covering the 2012 Flames of War Early War Nationals on Friday and Saturday. I get home on Sunday. I'm sure I'll be exhausted after a lot of hard work and hard play, but it'll be less than a week to work on getting it all sorted, before the big in-store Armies On Parade day (June 30 here in the US). 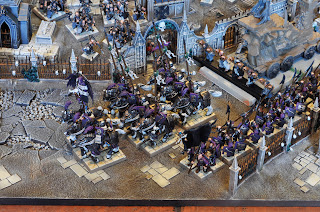 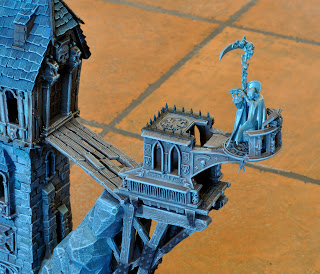 On Display! sponsored by Dropzone Games 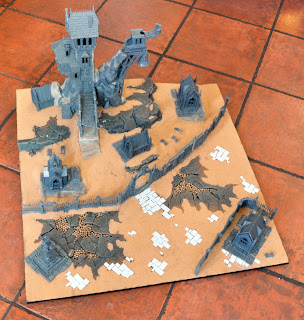 Last week I finally got all the "bitz" together for my Procession of Morr display Board. Thanks go heavily to Dropzone Games (who supplied the Realm of Battle board section, the Skullvane Manse, War Altar, and the Garden of Morr), my friend Dave (who provided another Garden of Morr), and my friend John (who hooked me up with the big-ass bell hanging from the Manse). 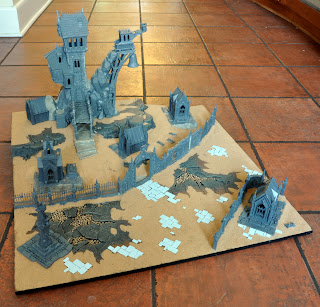 Thanks go to my wife too, who gave me some free time today so I could get a lot more work done. My daughters are wonderful and I love them both dearly, but they can (as any parent knows) be a bit of a handful at times.

I hope you enjoy the shots of the board. Priming starts tonight, and painting tomorrow. 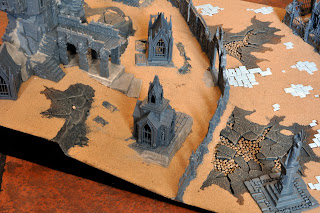 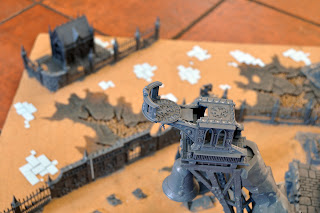 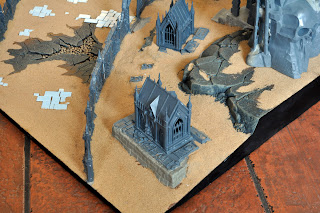 At the top of this post I mentioned Dropzone Games. Dropzone is a brand-new store in the Baltimore area (well, in the Glen Burnie area) that is owned and run by three former GW employees with a drive and determination to see everything done right. Some of you may remember this post from September of 2010, in which I decried the fashion in which GW chose to close down the Baltimore Battle Bunker. Well, in a somewhat ironic turnaround the then-manager of the Bunker, Tom Gruhala, is now the manager of Dropzone Games which is, amusingly enough, located in the same building as the old Bunker. Pretty cool, huh?

Anyway, the guys are now open for business, and stock all manner of cool miniature gaming stuff. There are the standards you'd expect (Warhammer, 40K, Warmahordes, Flames Of War), but they are also carrying strong ranges of Mantic's Warpath and Kings of War, Dust Warfare, and the Bolt Action range from Warlord Games. Add to that a good selection of resin "after-market" parts from Scibor, Micro Arts, and Kromlech and you've got some great choice. Tom has also told me that with short shipping times from almost all of their suppliers, special orders placed before 3pm can be at the store within a day or two. Nice!

If you are in the MD/VA area, head on in and check them out, and keep your ears open for details of their big "Grand Opening" event in September. Here's a quick link to their website, and you can follow/like them on Twitter/Facebook too.

Enough of the puns, it's Crunch Time! 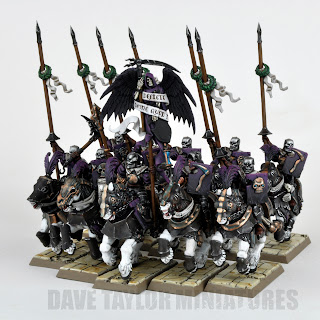 All of ten the Knights of Morr are finished.

And just minutes before this post I finished off another four spearmen, meaning 27 are complete. Twenty-three are shown in the photos here.

The final three are the command group. Any thoughts on the iconography for the banner? I'm sure I'll use one of the mottos that have already been submitted, but I just need to nail down what I'll paint on that black square ; )

PS: Only 15 days until the in-store Armies On Parade event!
Posted by davetaylor at 6:32 PM 27 comments:

The Black Crusade is launched! 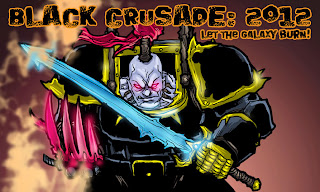 In 2010 and 2011, I worked with a dedicated team of hobbyists across the country to bring you two great charity events. The first was The Stormwardens Army build, the second was The Heroes of Armageddon Army builds. Over those two years we raised close to $50,000 for Doctors Without Borders, an amazing charity doing great work around the world.

Thankfully, Falk from Tabletop Fix was waiting in the wings to fill the void.

He has teamed up with a bunch of other hobbyists and has recently launched the Black Crusade of 2012. Click on the link, check out the details, and consider getting involved in some way or other. The cause is another good one, and I'll be following their progress. With any luck it'll get me excited about participating in another crazy thing next year!

Cheers
Dave
Posted by davetaylor at 10:52 AM 6 comments:

Painting... and Paints - Part One

I'm currently neck-deep in the spearmen and knights for my Procession of Morr army. I'd take a few minutes to take photos of their progress, but that would take valuable time away from the actual painting of the models. With summer upon us here in Baltimore I'm finding that every spare second of my weekends is being planned away on a variety of fun activities and trips with my two little girls. Not a bad thing at all, but it does reduce the painting time. Hopefully I'll have some great news to report on the progress front early next week.

Until then, here's the first part of that mini-series on Paints that I mentioned a couple of posts back. Enjoy!

Part One - THE BACKGROUND

When I first started painting toy soldiers I was a young university student barely scraping by (well, I was living at home and working around 20 hours a week, so I had some money, but most of that was being spent on food and beer and general hanging out with friends). I used to use what ever cheap-ass paints I could find. My first models were painted with enamels, acrylics, and even gauche (did I mention I was studying graphic design at the time?)

I was pretty cheap when it came to the paints I bought. Until, that is, my girlfriend at the time bought me a set of the GW Inks (this was in 1994). The additional things I could do with the inks were great, and they looked even better when used over acrylics, so I slowly started to build my GW paint collection. Later in 1994 I started working for GW so the paint was now half off, which certainly appealed to my cheap side.

Some might also call me lazy, the convenience of having so many great colours in the store that I worked in meant there was no need for me to go anywhere else.

So, cheap and lazy? I prefer to think of myself as frugal and efficient. As time went by and I was spending more of it talking to people about how to use GW paints to paint GW miniatures, it really became part of my job. I don't like lying, so it made no sense for me to start painting my figs with Vallejo paints (and later P3), so I stuck with what I knew and I like to think I became very proficient in the quick deployment of GW paint onto GW models.

Fast forward a bunch of years to roughly 2005-6, GW decided to abandon a few great paint colors that had become integral to the way I painted models. These paints included Beaten Copper and Tanned Flesh, and it was then that I started to dabble a little on the dark side, picking up the Vallejo analogues of Hammered Copper and Tan Skin (or something similar, the name has rubbed off my bottle).

This was followed by GW's introduction of the Foundation paints, and later the Washes. At the same time a few more paints were cut from the line, with efficiency quoted as the reason. It seemed that GW struggled to be able to deal with a paint range with more than 75 colours. A confusing state of affairs really, but as long as the new staples of Calthan Brown, Tau Sept Ochre, Denheb Stone, Khemri Brown, Badab Black, and Devlan Mud were always around, things would be fine. I was incredibly happy to stick to the GW range (aside from my small and secretive dalliance with HC) and things went on as normal.

Until I was canned in late 2008. GW paints were no longer the cheapest, most convenient option. My frugality and efficiency were able to open the doors to more paint ranges, and now that I wasn't "tied down" to the GW range for purposes of promotion, I was free to explore.

And explore I did, but rather tentatively.

Next time on Painting... and Paints: The Current Era.