The wait is over!

Here are two jpegs that contain the plans for the Troop Transport Truck.
It has taken a while to get them to you because we had to refine them a bit and then my travel schedule conflicted wildly with Thomas's so these were delayed in getting to you.
On each sheet is a 1" square that will hopefully help you with printing these out at the right size. You can check back here and here to get the first two parts of the truck-building tutorial. There will be a third part, basically about detailing the truck and other things you can do with it.
So, I hope it was worth the wait. Remember we used 1mm plasticard to build the "after-market" parts, so don't try and do it with anything thinner or thicker without the proper compensation. If you build one, please take pictures and send them through to me (email address in my profile). Hopefully Thomas and I can put together a gallery and post it on our blogs.
Enjoy the truck, I'm back to my vacation on the beach at the Outer Banks of North Carolina!
Cheers
Dave 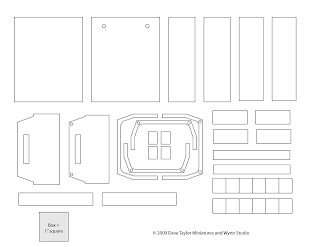 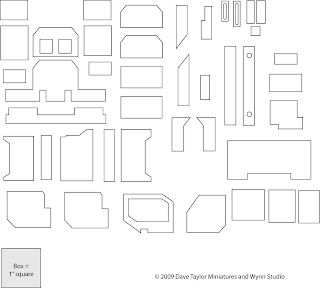 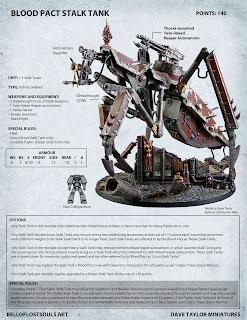 ...Christopher Allen with his great Stalk Tank datasheet!
"What the hell are you talking about, Taylor?" I hear you ask. Well, back when I hit 200 followers on this blog I set up a competition for those intrepid lovers of creating Apocalypse datsheets. You can see that post here.
Now, just over two months later, I bring you the winning datasheet. There were dozens of entries, many of them very good. Essentially all the entries broke down into two camps: the first felt the Stalk Tank should be around the same size/power as a Defiler, the second felt it should be closer to a Brass Scorpion. While I'm all for "more power", I felt that the model I had built certainly fell into the former category. After several conversations with bigred at Bell of Lost Souls, we decided the best sheet had been submitted by Christopher Allen. Chris hails from Dallas, TX and has helped set up Adeptus North Texas, a great place online to find some excellent hobbyists. Just click here to check out their website.
Not only does Christopher win a prize from me (a 40K vehicle of his choice), but his datasheet will also appear in the next "reprinting" of the Bell of Lost Souls Lords of Battle Apocalypse download, great stuff indeed! You can check out the v2 download here. Chris's sheet will be included in the next one.
And it wouldn't be right if I didn't mention the runners-up. These entrants all came quite close to what I had in mind, which really is no average feat. Congratulations also to (in no particular order):
• David Schatz
• Geoffery Snider
• Amdor
• Liam Thorpe
• Kevin from Terran Forge
Now I just hope everyone can see the datasheet. For some reason I can't put a PDF into my post (or don't know how to). If anyone does know, feel free to leave a comment so that I can get it sorted.
Cheers
Dave
UPDATE: Chris has chosen a Battlewagon to add to his growing Ork horde! It'll be heading out in the post this week.
Posted by davetaylor at 12:01 PM 11 comments:

THE TABLE
So, all my plans for painting, modeling, blogging etc. went out the window this weekend when I was asked by some friends of mine in the UK to paint up a Citadel Realm of Battle gameboard from Games Workshop so they could take it to GenCon this week to show off some of their new miniatures.

I picked up the board on Friday night, primed it then, and got it painted on Saturday (around a great afternoon of grilling with old friends). On Sunday I was able to get it flocked and ready for pick-up today.
This board has come under varying levels of flak from across the hobby spectrum, primarily for the wildly increasing price on its release (originally slated at $175 before release it went through two price rises and is now $290). Due to my "change of employment" situation I never picked one up until Friday, and I must say it's a nice piece of kit.
Painting and flocking a 6' x 4' table in such a short period of time - while looking after my daughter, preparing for and hosting a party for 12 people, and attending a local production of Hamlet (thanks for a great show Phil) - was pretty amazing. The only things that weren't too smooth were the pits of skulls (cool but time-consuming) and the darker flock from the GW Terrain kit (VERY clumpy, it required several sifts through a kitchen strainer to get most of the flock to separate, again time-consuming). All in all though, this is a very cool table with a lot of potential.
The friends who'll be using it are the guys from Mantic Games. You can check out their website here and their blog here. Not too much info right now, but I'm sure they'll be flooded the interwebs after GenCon. I'll be painting some of their Elves soon.
THE LIST
I mentioned I would post a copy of the Blood Pact list I intend to take to the Battlefoam Wild West Shootout in October. Well here goes:
Blood Pact (IG) list - 1750 points

Feel free to have at it. Please remember, however, I build lists with models I like, not necessarily with those that'll kick some butt for me. I'm not in it to win, just to put in a good showing.

The arrival of the PDF is imminent. Thomas is in Arizona as I type. He'll send me the PDF once he's back in town (this weekend) then I can get it to you, faithful reader, at some stage next week.

It is less than two weeks til BoLScon, do you have your tickets yet?

Pact to the grindstone

Well, now that the Demon season is over (for me at least), I needed another deadline to keep things rolling and put a bit of structure back into my modeling and painting.
To that end I'll be heading out to Phoenix in October to play in the Battlefoam Wild West Shootout! I'll be taking along 1750 points of Blood Pact. I put together a list, which I'll reveal next post. Below are the infantry I needed to add.

Two Missile Launcher teams to add to the one I already have and an Autocannon team to add to my other two.

And finally, I need to get my second Infardi/Penal Legion squad painted. For these guys I used a lot of knives and other bitz from the Dark Elf Corsairs sprue, including the cool "reaver hook" thingy.
After these 20 models I just have a standard bearer to paint and six tanks to create and paint. Not too tough I hope.
Cheers
Dave
Posted by davetaylor at 2:01 PM 12 comments:

Why, oh why, do they keep on trying?

Quick post today to say "Aaaaaaargh!"
It has now been confirmed that the guy that entered the great Chaos Lord that I linked to in my last post, the guy that collected the Gold trophy, was not, in fact, the guy who painted the freakin' model!
To make matters worse, this guy walked away from Games Day with THREE Gold trophies, for models not painted by him!
To make matter even worse, the painter must have been in on the scam as his CoolMiniorNot pictures were updated immediately with their trophy status!
So, Marc Schmelze (the collector who entered the pieces as his own work in Chicago) and Karol Rudyk (the original painter), I wish you nothing but unhappiness in your future toy soldier endeavors. You sully the hobby. While the painting may be spectacular, the spirit is so false it makes my skin crawl!
Congratulations, however, to those folks who will now take their rightful place among the trophy winners!
Edit: perhaps I was overly harsh on Karol. I'm not sure.
Cheers
Dave
Posted by davetaylor at 9:47 AM 57 comments: