After a little holiday break, I'm back at it. Only three months left until the Warlord needs to be in Chicago for AdeptiCon! 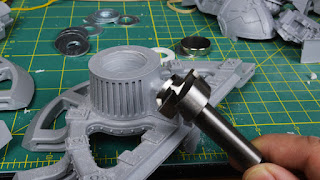 In this episode, I do a bit of drilling with my new 1" Forstner bit. I also drop in some heavy duty magnets, and show off my new acquisition, the Beta-pattern head that is currently only available from Warhammer World : )

Please check out my Patreon page by clicking on the link on the top right of this page.

You can check out the Warlord build on the Weemen blog HERE : )

Happy New Year to you all. I had a great 2015, I hope you did too. This just squeaks in to make the 95th post of the year. I painted almost as many models this year as last, but still more than 10 models per week. Not a bad average considering six of those were super-heavies! 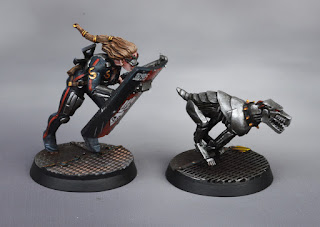 Here's the second completed model from the Inquisitor commission - Barbaretta and her faithful/programmed hound. I like working with metals so the hound was pretty straightforward. Barbaretta's black jumpsuit was the fun task on this one. To add a little extra something, I mixed P3 Coal Black into the highlight mix I used. I think it gives it a nice depth, and the greenish tinge works well with the red stripes. 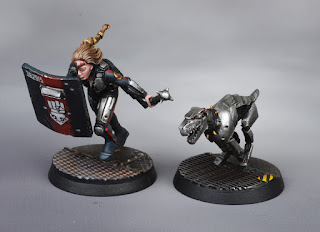 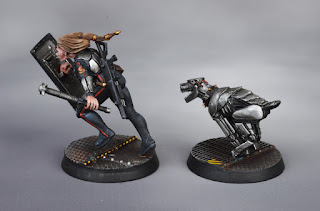 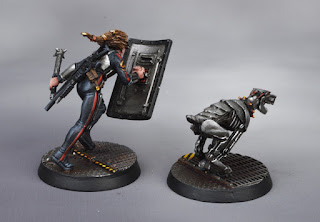 Merry Christmas PLUS a teaser AND a podcast interview : )

I'd like to take this opportunity to wish you all a Merry Christmas, and thank you all for checking out the many meandering posts for 2015. I hope to see you all back again during 2016 (although I think I still have a couple of posts left in me for this year). 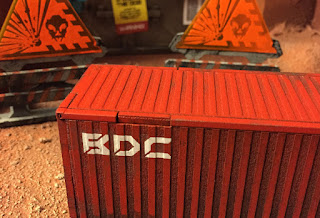 I've been slaving away on a few more tables for a client, tables that will end up gracing the pages of an updated rulebook. Pretty cool, eh?

I've been able to use excellent pieces of terrain from a variety of companies (along with scratch-built and hand-sculpted pieces) that include: Ironheart Artisans, Burn In Designs, Impudent Mortal, Secret Weapon Miniatures, and Mantic. On these containers (Ironheart above and Burn In below) I've used Sci-Fi Lettering decals from Fallout Hobbies. The decals themselves are nice and sturdy without being too thick, and the white printing is great, perfectly opaque. They worked out wonderfully for this project. 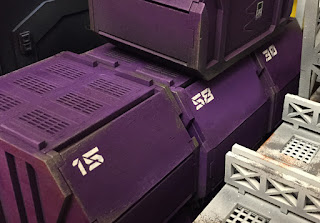 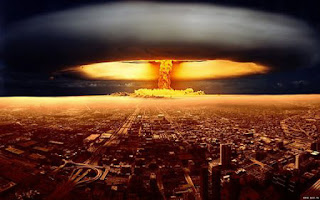 Speaking of Fallout Hobbies, Ron has just started up a hobby-focused podcast in which he'll be interviewing prolific hobbyists and geeking out about cool techniques and so on. I was fortunate enough to be on his first episode, which is now up on Soundcloud. I'm looking forward to listening to the upcoming guests (apparently Ron already has a wishlist of 20 guests he is keen on talking to).

You can, if you are interested, check it out HERE : )

Cheers
Dave
Posted by davetaylor at 4:00 AM 13 comments: 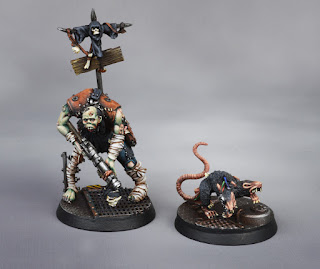 I've finished up the first couple of miniatures from the Inquisitor commission. The first one to show off is the mutant Quovandius (and his two-headed rat). 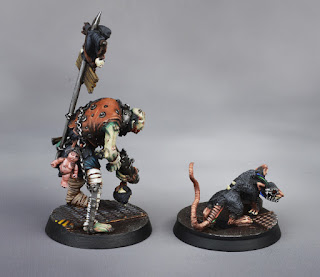 I particularly liked painting up the dismembered doll. 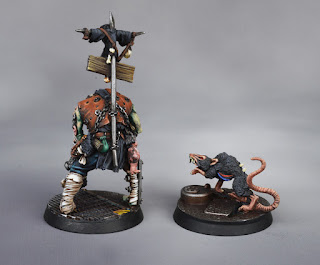 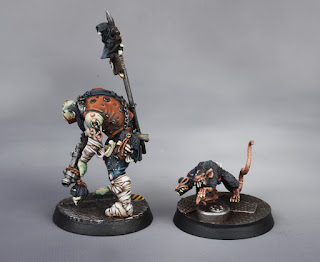 Cheers
Dave
Posted by davetaylor at 4:00 AM 15 comments:

Well, I finally was able to film another video. It's a pretty quick one, not too much to look at. I complete the construction of the superstructure and start on the air intakes and exhausts.

Next time I'll get some more stuff glued onto the torso, and possibly attach some magnets : ) 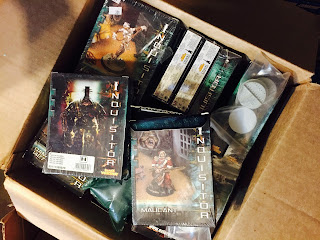 A new, long-term, slow-burn commission has arrived in my bunker. Over the next who-knows-how-many months, I'll be building and painting what appears to be almost the entire range of GW's 2000 release, Inquisitor.


With the legs essentially assembled (apart from the armor plates, of course) I decided to move onto the weapons for the Warlord. I currently have two Volcano Cannons and two carapace-mounted Laser Blasters, and I'm sure that as Forgeworld releases a wider array of weapons that I'll pick up a few of them too (although I'm not that fussed on the Apocalypse Launchers they also have for the carapace mounts).

Anyway, this video covers my thoughts/feelings on the weapons I have been assembling.

Cheers
Dave
Posted by davetaylor at 8:46 AM 3 comments:

Tanith - And in roll the Volpone Bluebloods 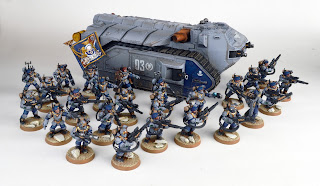 Typically I've worked on a single platoon for this ongoing Tanith commission each year (check out previous posts HERE) but this year my client switched jobs and was able to afford a second installment. Continuing to expand the forces involved, he asked for a platoon from the Volpone 50th, the so-called Bluebloods. General Sturm and Major Gilbear play important roles in the narrative arcs of the Ghosts, that of obstacles to be overcome without resorting to violence.

Initially we discussed working on a 25-man platoon carried in three Taurox transports. I'm not a fan of the Taurox model at all, so I suggested the Crassus Amored Assault Transport. My client checked it out and agreed to pick one up. The Crassus has a transport capacity of 35, so my client added two Cyclops Demolition Vehicles to the docket. Anyway, on to the models : ) 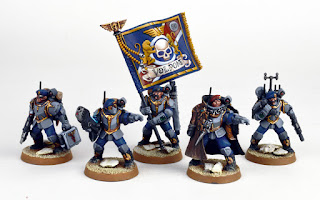 Like many of the regiments in Dan Abnett's stories, the descriptions of the Volpone Bluebloods are quite vague. We scoured the books and the Internet and basically found that there was little beyond "grey and gold armor" and "matte-black hellguns" to go on. Sometimes that can be fine, and knowing I'd be working with the Scions kits, I started to develop the scheme. 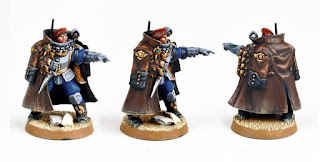 Major (later Colonel) Gilbear was the adjutant to General Noches Sturm when we first encounter them in the storyline, just as the General orders artillery to shell the retreating Ghosts (in Ghostmaker). He is described as tall and physically imposing, so I really had to use the stormcoat provided in the Scions box to bulk him out. I also added a few millimeters to his legs so he stands taller than all the others in the platoon. Hanging from inside his coat is a fox tail, a nod to the origins of the name Volpone (Italian for sly fox). He sports a red beret, rather than the blue we chose for the troopers to again mark him out as a commander. While the armor and fatigues of all the models in the platoon are nice and clean and neat (rigid Volpone discipline demands it), I decided to paint up his stormcoat as a battered old thing, no doubt once worn in combat by an heroic forebear.

Here are the standard bearer and vox caster for the command squad. It was fun to paint up that big banner (all those details are already sculpted on) although it was a bit tough to scrape away the "Scions" text that comes molded to the scrollwork.

Rounding out the command squad are the plasma gunner and the medic. The pose for the plasma gunner is very cool. Just right for a guy who is preparing to lay down devastating cover fire while his comrades advance. The medic's equipment is very cool, the case is very neat and the narthecium in his left hand completely brutal.

We decide to split the troopers into three initial squads that could be recombined into two larger squads should my client so desire. The first has a sergeant with power fist and two troopers with meltaguns. Tank-hunting is their obvious role.

The second squad features a sergeant with a power sword and plasma pistol, plus two troopers with hot-shot volley guns. This squad can certainly focus on power-armored opponents.

And finally a cheaper generic squad, a sergeant and five troopers with stock weapons. If my client wants to play with larger squads, he can simply split this squad up and insert the members in to the previous two. 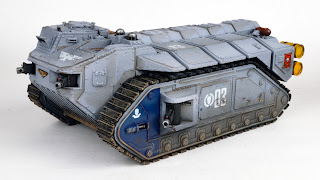 On to the Crassus. This beast of a transport vehicle was released a few years ago by Forgeworld and it was the star of quite a few memes in its time, but it has since faded into obscurity. I'm actually a fan of it. I think it looks pretty cool.

If you put the side sponsons on, you can load it up with four weapons from the following list: heavy bolter, heavy flamers, autocannons, or lascannons. Of course my client wanted all four options available to him : ) 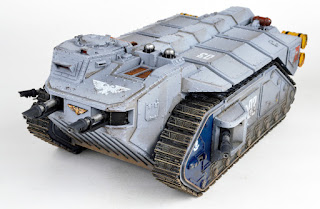 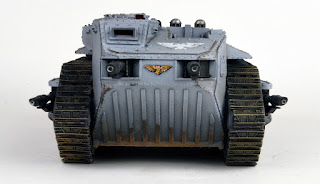 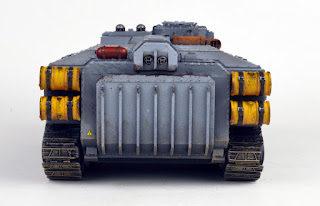 As you can see, I've kept the weathering to a fairly minimal level, following on from the idea that appearance is incredibly important to the Volpones. 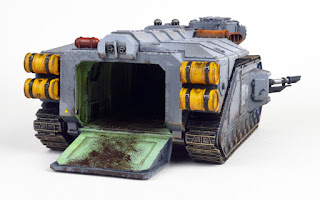 It was interesting to paint the interior before I had fully assembled the model. It added another step that I hadn't initially thought of, but I think it worked out pretty well in the end. 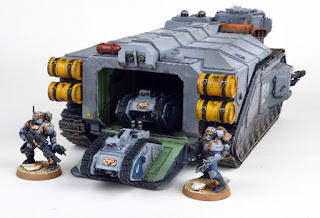 Finally, we have the Cyclops Demolition Vehicles. These little guys have zero weathering or damage on them, because it's their first time out since they left the factory. When your job is to explode violently on your first time out, you don't get a chance to pick up nicks, dings, and scratches ; ) 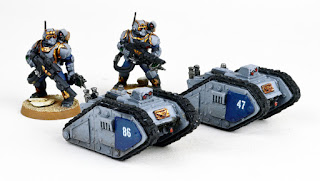 Their two controllers can also be folded into any of the squads, should my client not want to fields the Cyclops bombs.

I hope you all like them. I will say that the photos have unfortunately knocked out quite a bit of the subtle shading on the grey armor, but that's sometimes how it goes.

Cheers
Dave
Posted by davetaylor at 4:00 AM 16 comments:

A new video - Mechabrick Upgraded (not Titan-related, but cool mechs instead)

I hadn't planned to do this video, but the "plastic building-brick" robots that I received from a friend recently were too cool not to show off in this fashion.

I'll let you watch and check them out, but you can find out more about the Indiegogo campaign HERE, and check out the Mechabrick website HERE.

All very cool indeed!
Posted by davetaylor at 6:15 AM 5 comments: