For Part One, which lays out the project, click HERE.

One week on and I have a few WIP images to show you for my diorama (The Flight). Above is Urgo Wroth, now with arms and lots of other detailing.

And a few different models here. On the left is my initial model for Areta. She is based on a model I started originally as a Mechanicum assassin. Most of Areta is from the Dark Eldar Wyches kit. In the center is my first stab at Saskia, who owes much of here look to the Dark Elf Corsair kit, along with bitz from DE Wyches, Daemonettes, and the VC Coven Throne. On the right is the start of Sister Aaliyah, made from Dark Elf Corsair legs and a Daemonette torso. I'm thinking now, however, that I might need to use some of the new Dark Elf Witch Elves pieces to start her over again.

In addition to the work on the diorama, I started putting together my recent Forgeworld acquisitions. 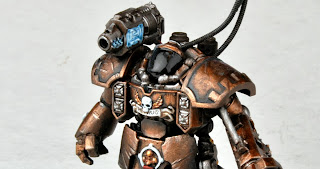 And put a little paint on my Mechanicum Skittari Centurion.

The Flight - Part One 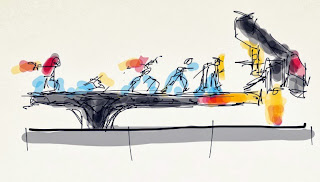 For a little while now I've been posting a fairly random series of posts, with nothing really to connect them other than they're all about toy soldiers (surprise surprise). At the same time I've been marveling at the patience, dedication, and endurance of people like David Soper, Klaus, and Colonel O'Truth. These hobbyists (and many more like them) can really take their time with a model, be it a single Skink priest or an enormous scratchbuild with tens of thousands of hand-cut rivets.

Well, I've decided to give this approach a try and will chronicle my building of "The Flight" (working title) in a similar manner. I'm also planning on collaborating with a few other artists on various projects over the next 12 months, and this is the first of those collaborations.

I've been thinking my way through this particular diorama idea since Games Day 2012. After attending the classes of Victoria Lamb and Roman Lappat at Adepticon earlier in the year, I knew I had to spend a bit more time planning this project out if I was going to push my own limits and get the best out of it that I could. The two rough sketches above are ones I did on the flight home from Adepticon. They show the basic structure of the diorama, some ideas for lighting/colors, and the genesis of the story - the flight of an Inquisitor and his henchmen towards a waiting gun-cutter at the end of a Star Wars-style walkway.

Well, after turning over a bunch of things in my mind, I asked my good mate - author Anthony Reynolds - if he could help me out by making something more concrete out of my general idea. He was a real champ and sent me this:

As we run, overpowered las-fire and solid-slug projectiles hurtle by us, buzzing like angry insects. I would have been hit a dozen times already if not for Saskia. She has her hand out behind her as she runs, slender ring-encased fingers splayed. She’s nudging the enemies’ shots away, deflecting the incoming fire with her mind, just enough to miss us.

Spotlights from ornithopters overhead chase us, leading our pursuers on. More of them are closing in fast; I hear their jumbled thoughts crashing against me.

We have what we came for. The heavy stasis-tube is mag-locked to my thigh. Contained within: the gene-seed of an Adeptus Astartes. The Ordo suspects their genestock is compromised. We will see. Thankfully, it is not the Space Marines themselves that are hunting us. Not yet.

I kill one of our pursuers. My wrist-mounted inferno pistol burns his head to ash. Two more fall to the heavy, chunking fire of Urgo-Wroth. The massive, slab-muscled warrior – vat-grown from augmented gene-stock and heavily mecha-augmented – is a living tank. The gantry-bridge shudders with his every step as he runs. Saskia doesn’t bother exerting her psychic powers to protect Urgo-Wrath – he can handle everything this enemy throws at him. His body is riddled with las-burns and bullets unable to penetrate the thick shielding implanted within his flesh.

His malformed twin, held aloft on humming suspensor arrays, is similarly left unprotected by Saskia. Incoming fire hammers at the crackling refractor field bubble that protects him. He retaliates with stabbing fire of his own, darting sinuously through the air, his face twisted in savage pleasure as he kills. I do not approve of the glee he takes in snuffing out life… but his usefulness outweighs his moral failings.

More of our pursuers – I cannot yet bring myself to name them enemies – fall to Areta’s shadow-blades. Part of the darkness shrouding the immense facility, she disappears and reappears at will, appearing behind, above, below and next to our pursuers, despatching them with ruthless thrusts and cuts before jumping again. To her foes, she is a living shadow, a murderous shade that is all but impossible to target. To me, she is much more.
My cadre is rounded out with three others: Luthor Hayne, my pilot, a murderer, ex-ganger and substance abuser, and also the best gun-cutter pilot I’ve ever met; Sister Aaliyah, a mournful penitent of the Adeptus Sororitas, soul-bonded to me and desperate to atone for some past indiscretion; and the mercenary Hand, giving the rest of us covering fire. He’s possibly the most dangerous of us all, with his two kill-drones. One day there will be a reckoning between us, of that I’m certain.

Hayne brings my cutter down through the acid rain storm. Lightning reflects off its glossy, void-black hull. It’s a gorgeous craft, as sleek and swift as a knife. The turret-cannon underslung beneath its insect-blade nose opens up, churning through the ranks of our pursuers. Still, more of them are closing in, and they are bringing in heavier elements now. Military-grade.

We’ve done more than stir up the hornet’s nest; we’ve dropped a grenade right in the middle of the hive, and the hornets are not best pleased.

I smile. It’s going to be a close-run thing. I send out a mind impulse to my cadre. 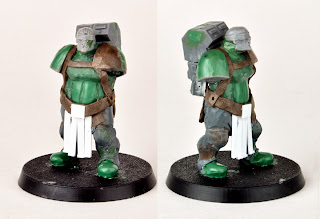 I've started work on Urgo-Wroth. After I finish the detailing on him, I'll start to add his heavy bolter. I think I'll have him standing on the platform near the waiting gun-cutter, his chunking fire lighting up the scene a little.

Throughout this process I'm really happy to take suggestions from you all. Understand that I might not follow them, but they'll all impact the progress in some way, shape, or form. 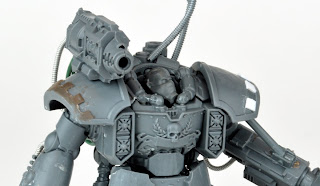 I knew, however, that if a I picked up a box of them and started tinkering, I'd find the problem. So, I did just that. Turns out my biggest "problem" with the models wasn't any particular element of the kit, I think that they're all great individually... by themselves. The problem was the way they were assembled. There just seems to be something "wrong" about a technology that can build/modify a suit of armor, to be piloted by a warrior (already in his own armor) that struggles to get it's weaponry sorted out efficiently.

Of course the same thing goes for the Devastator Centurions, but without the additional assault weapon.

There are other options for putting weaponry on that frame, but it seems GW just kept pushing the OTT button whenever they had a good idea, rather than stepping back, starting again, and incorporating the good ideas into the original design.

Anyway, here's my quick take on a "prototype" Centurion from an Adeptus Mechanicus Skittarii Cohort. Hope you like him ; ) 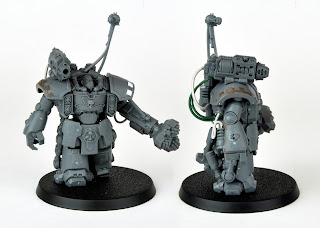 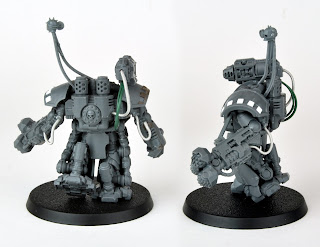 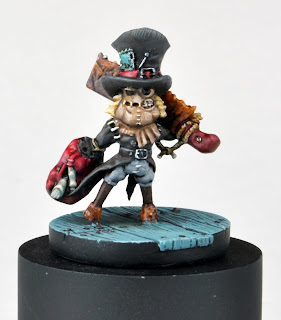 Continuing my recent theme of not having a theme, here's my version of Seamus, from the Puppet Wars game by Wyrd. I started on this guy months and months ago, and until the week before NOVA he languished on my painting desk. I felt I needed a "new" miniature for my Fantasy entry at the NOVA Open Painting Competition, so I jumped in and finished this guy off.

He didn't place, but he certainly was fun to work on. I hope you like him.

Additionally, I've just put up a post on our Guns of April blog about next year's activities. If you are interested in historical gaming, you should head over and check it out. It involves Frenchmen running around under the hot sun of Egypt.

Cheers
Dave
Posted by davetaylor at 8:22 AM 2 comments: 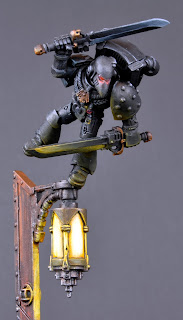 I was recently commissioned to build and paint Nykona Sharrowkyn, one of the Raven Guard marines to escape the Dropsite Massacre on Istvaan V. He's a great character who has built a small following amongst Black Library's Horus Heresy devotees. When a character shoots Fulgrim in the head, and kills another iconic character in single combat (twice), then you've got a keeper.

The tough thing about translating this character into miniature form is that he is essentially described as a shadow, an absence of light. Kind of tough to highlight someone like that ; )

This all meant that positioning him in the shadows, but being impacted by some light source, was important. I played around with a few ideas, and settled on the model you see here. I hope you like him as much as his new owner. 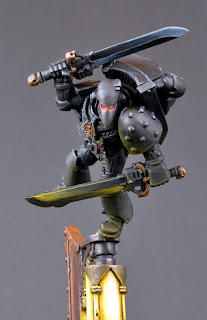 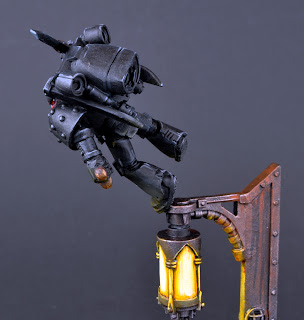 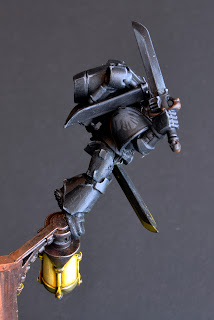 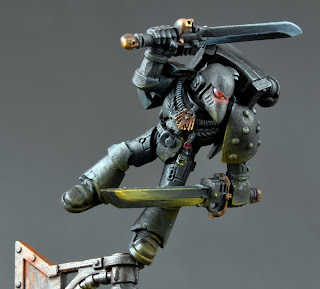 And there's another one on his way too. 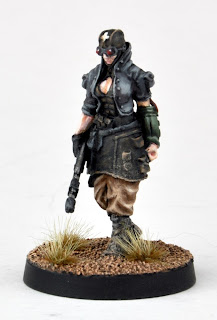 A couple of posts back I put up a teaser of two models from the Wreck-Age range of Stitchers. Well, here they are in their full glory. 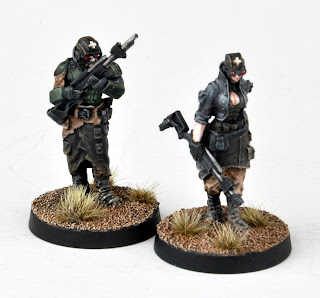 A little while back I heard from a friend of the guys at Hyacinth Games (and a regular reader of this blog). He wanted to send me some models and see what I did with them. I've always liked the ideas behind Wreck-Age and some of the "mood art" on the website is just great. When the Stitchers arrived, I started to sketch out a couple of color schemes. I started them a bit later than I'd originally intended, but I'm very happy with how they turned out. I particularly like the way the dark leather aprons and hoods turned out. Credit for the look there must go to Roman Lappat, thanks to his class at Adepticon.

Anyway, on to more photos. 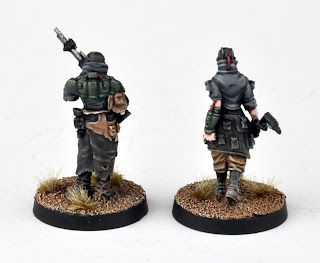 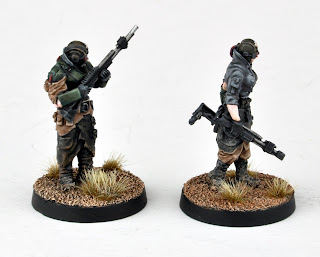