And now for something a little different...

Taking a break from all the Malifaux/Horus Heresy gaming fun, here's a little look at the start of a commission project. I'm painting up this Infinity Ariadna force for a friend of mine. He has quite a few of the models for this faction, and I'm painting up 17 of them. From what I understand, this faction is comprised of a "low-tech" collective of neo-Soviets, Americans, Brits (including Scots), and possibly a few others. The only guidance from my friend was "Urban scheme".

With a lot of Infinity tables (at least around here) going with a pale blue/grey/white colors scheme, this look seemed to fit well. The bases are from Dragon Forge Design, the Lost Empires set.

This model is an homage to Matthew McConaughey's character from Reign of Fire. I broke from color scheme a little on this one to get his fur-lined leather vest into the mix : ) 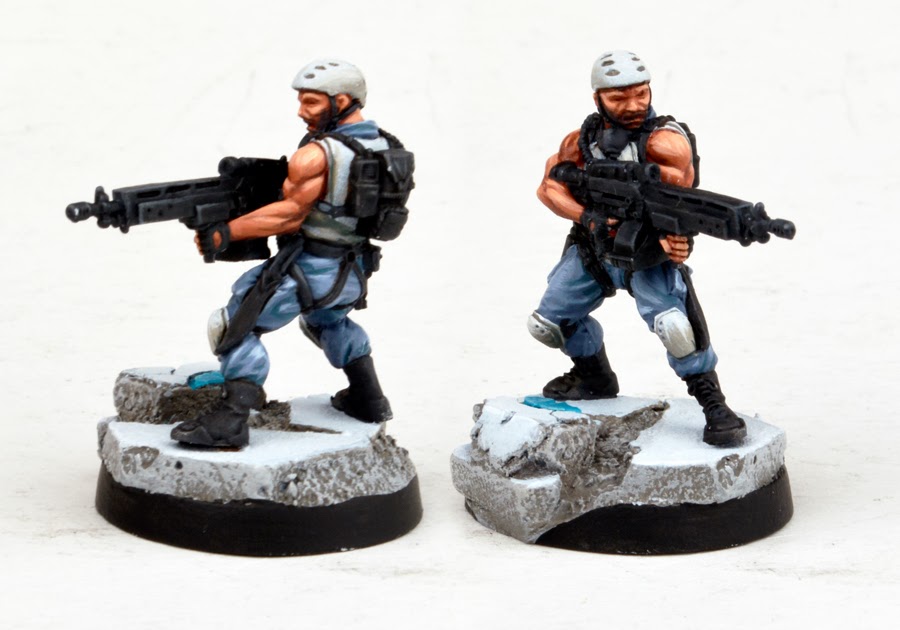 Cheers
Dave
Posted by davetaylor at 3:30 AM 7 comments: 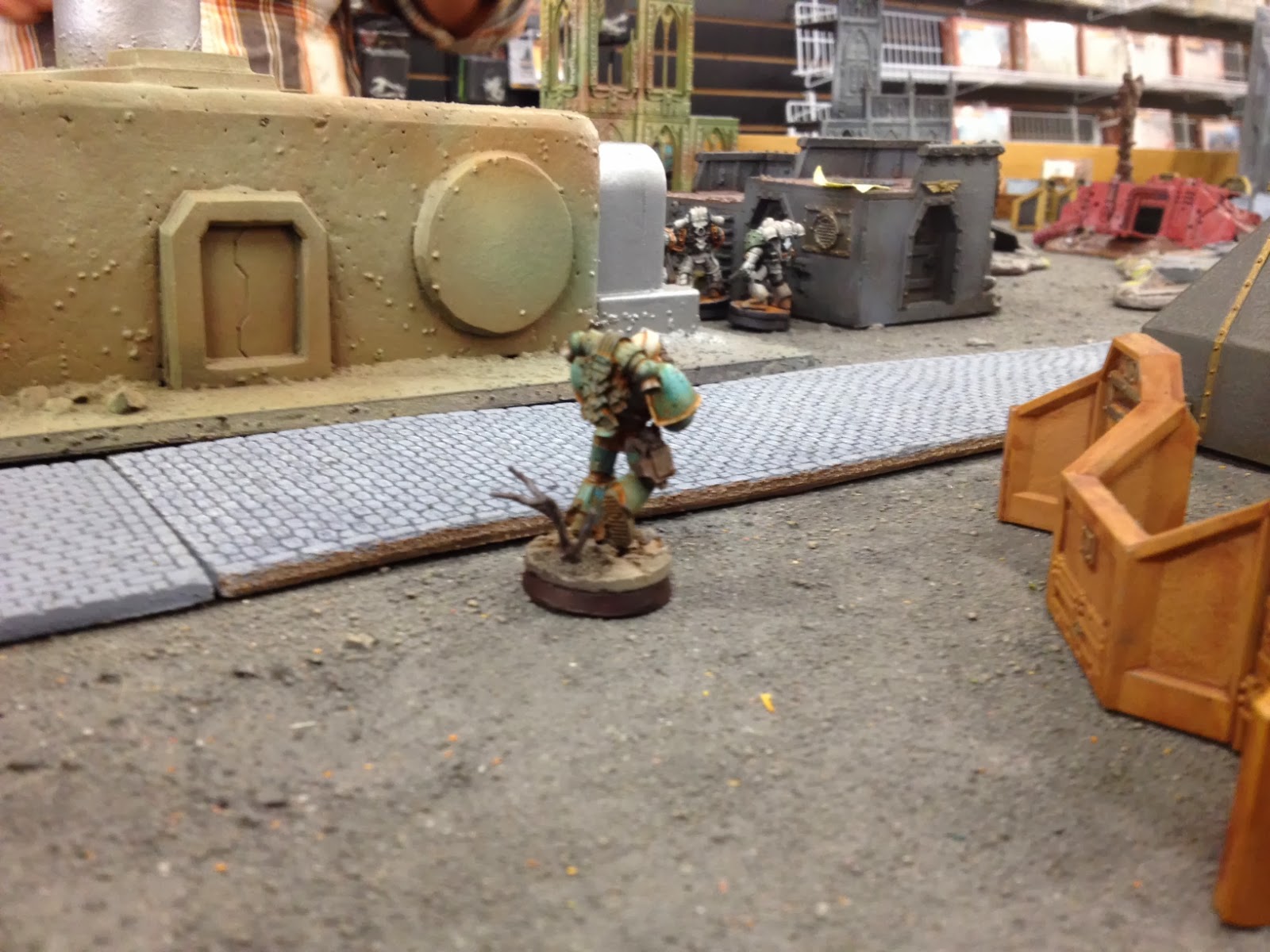 On Saturday I was able to get out and play a game of Killzone: Survival with my mate Marc Raley. It was cool to see our freshly painted models on the table, and Marc's Alpha Legion are, in my opinion, the best I've ever seen (for 30K or 40K).

Anyway, here are a few photos I took of the excellent game, but you can read a battle report over at Marc's blog HERE. 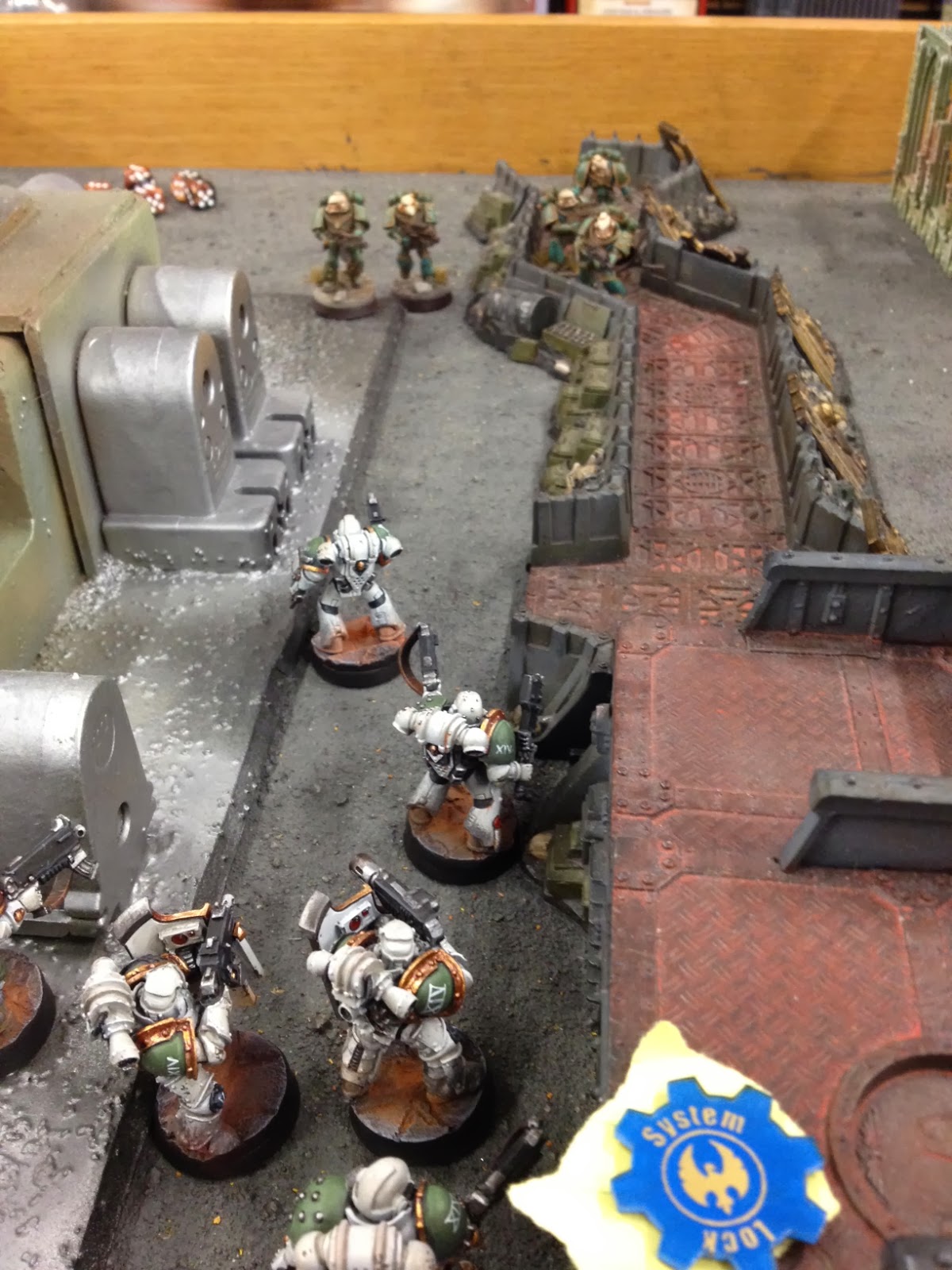 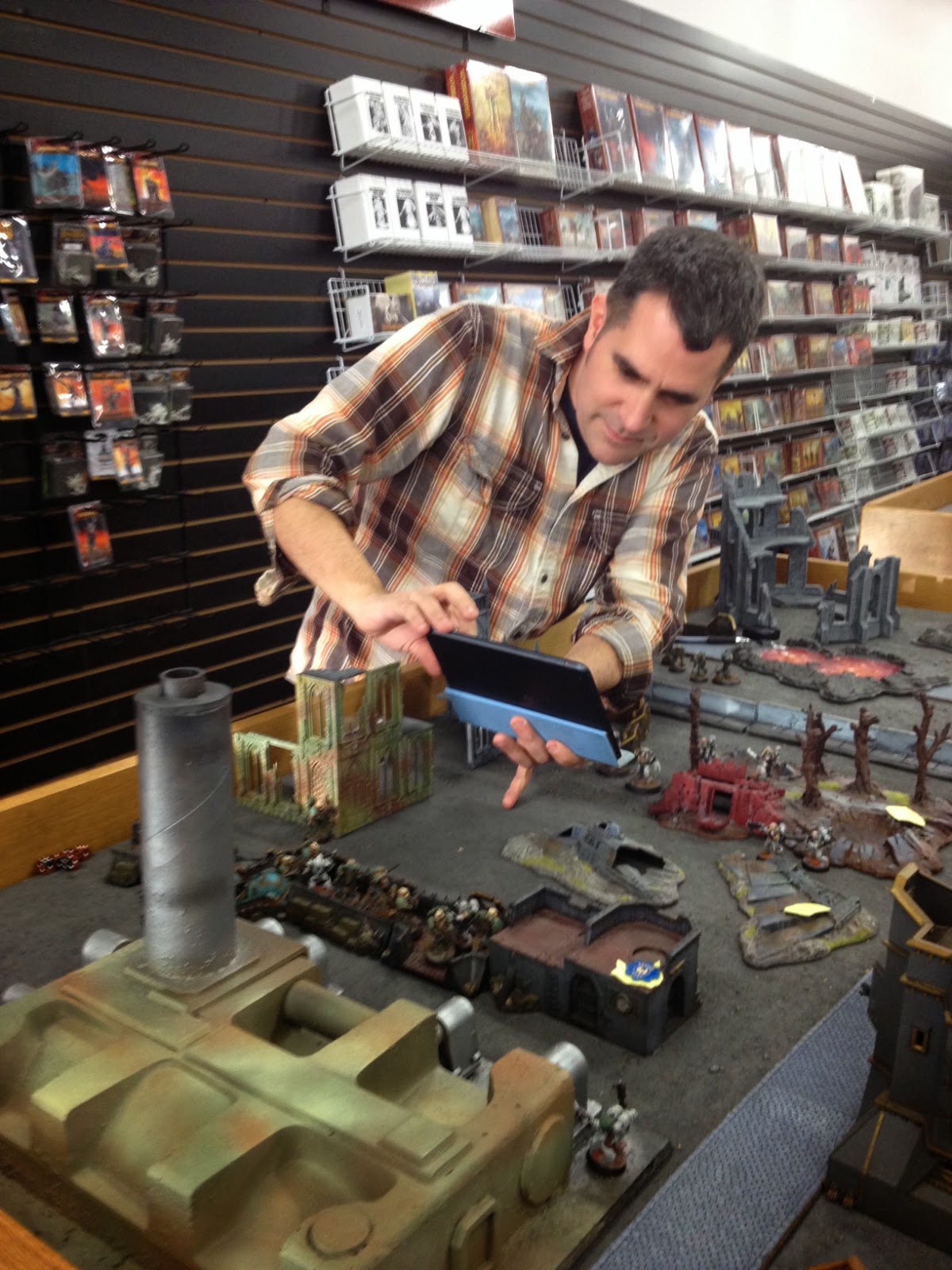 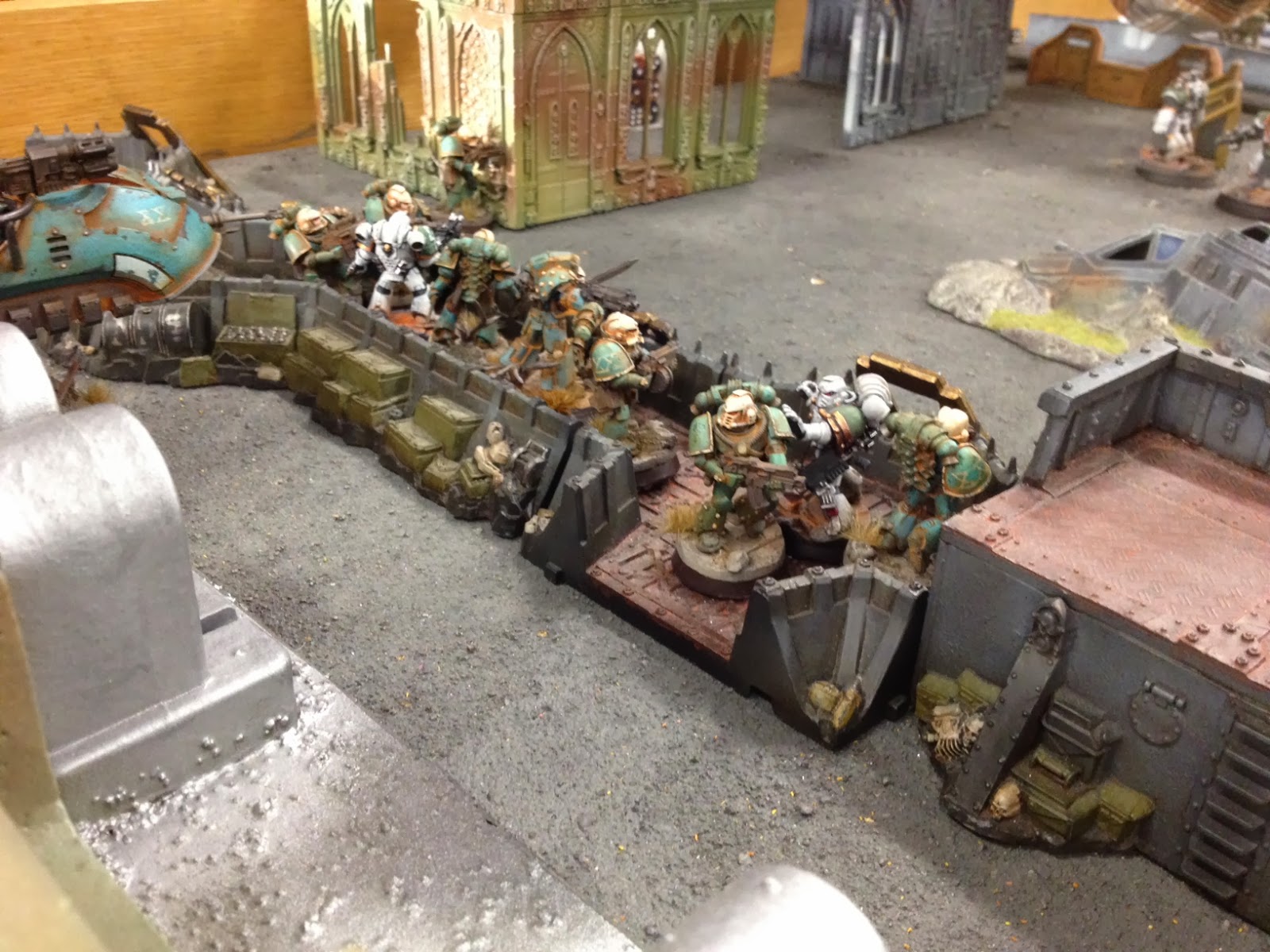 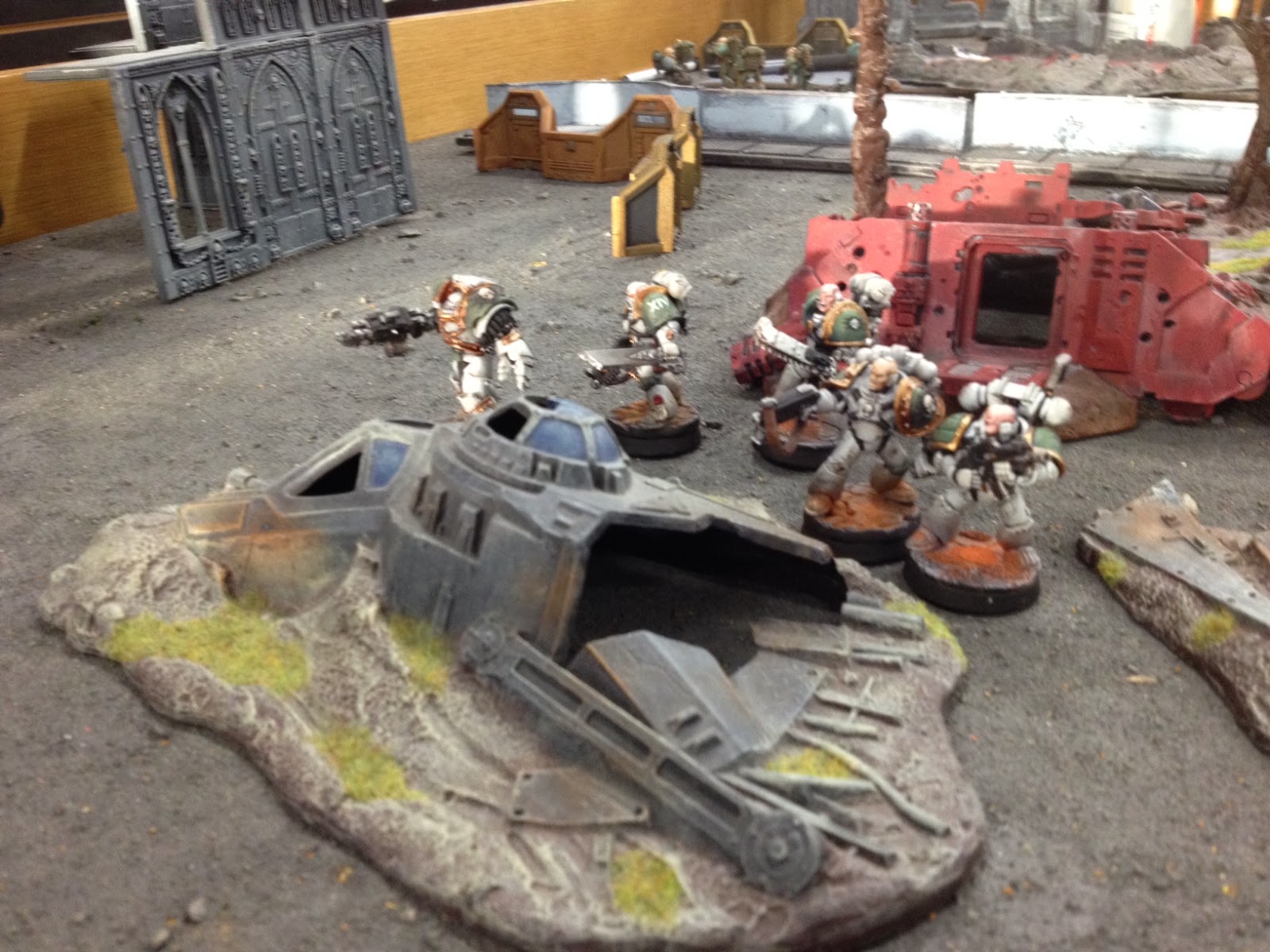 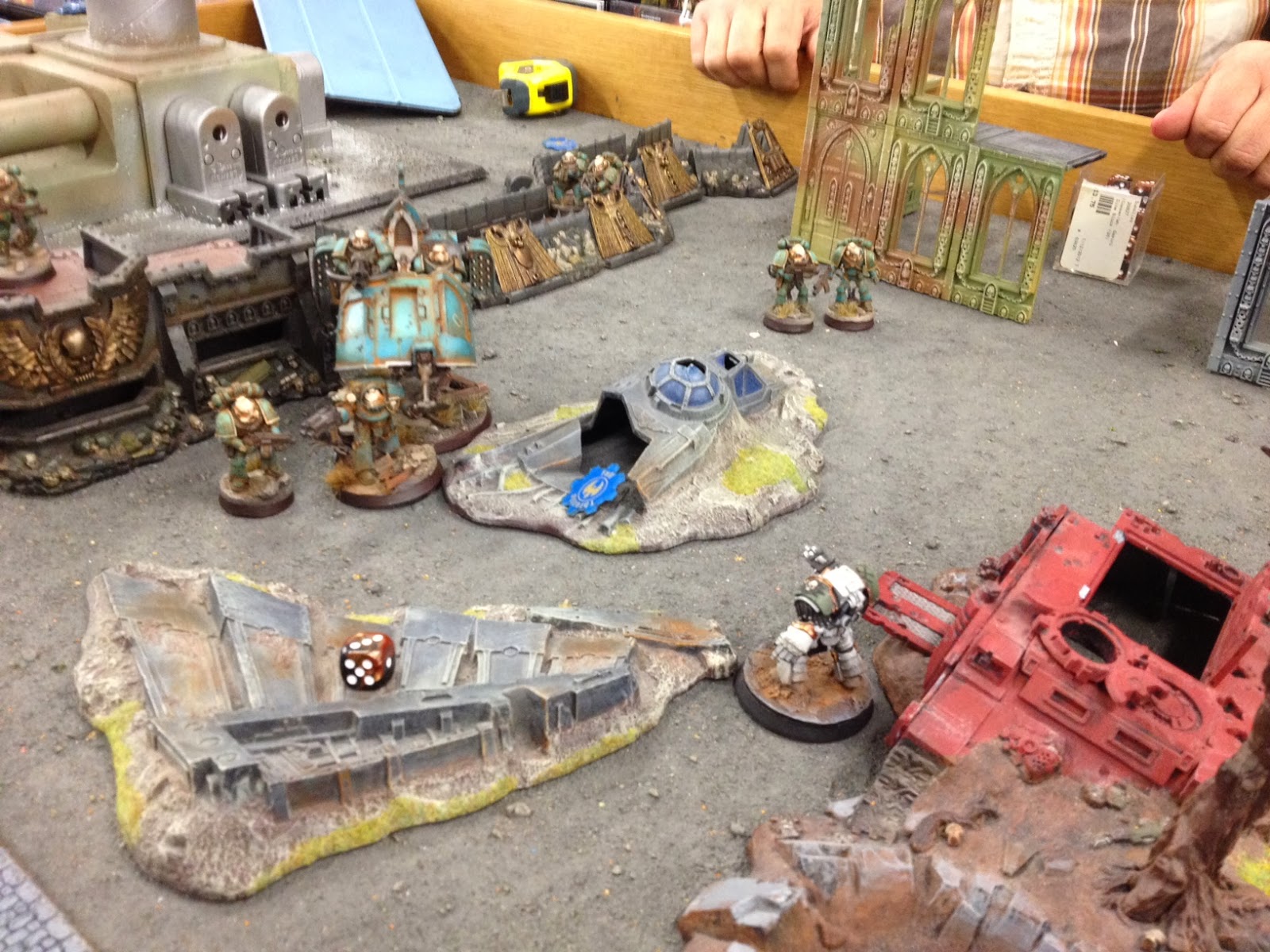 Cheers
Dave
Posted by davetaylor at 3:00 AM 10 comments:

Email ThisBlogThis!Share to TwitterShare to FacebookShare to Pinterest
Labels: Pre-Heresy

It started with the release of the Deathwing Terminator box set last year. I loved the look of the censer flail and the storm shields. I wanted to assemble some bodyguards for a Tech Adept in my Mechanicum army, but never got around to it.

It was fueled by the photos from UK Games Day last year. Lots of cool, enigmatic Mechanicum figures with absolutely no release dates.

It came to a head when WIP photos of the Myrmidon Secutors and Destructors appeared in White Dwarf (Dec or Jan issue), and the Myrmidon rules turned up in Horus Heresy - Massacre.

Here is a unit of Myrmidon Secutors, kitbashed from Deathwing Terminators, Necron Triarch Praetorians, Necron Warriors and a few others bits and pieces. 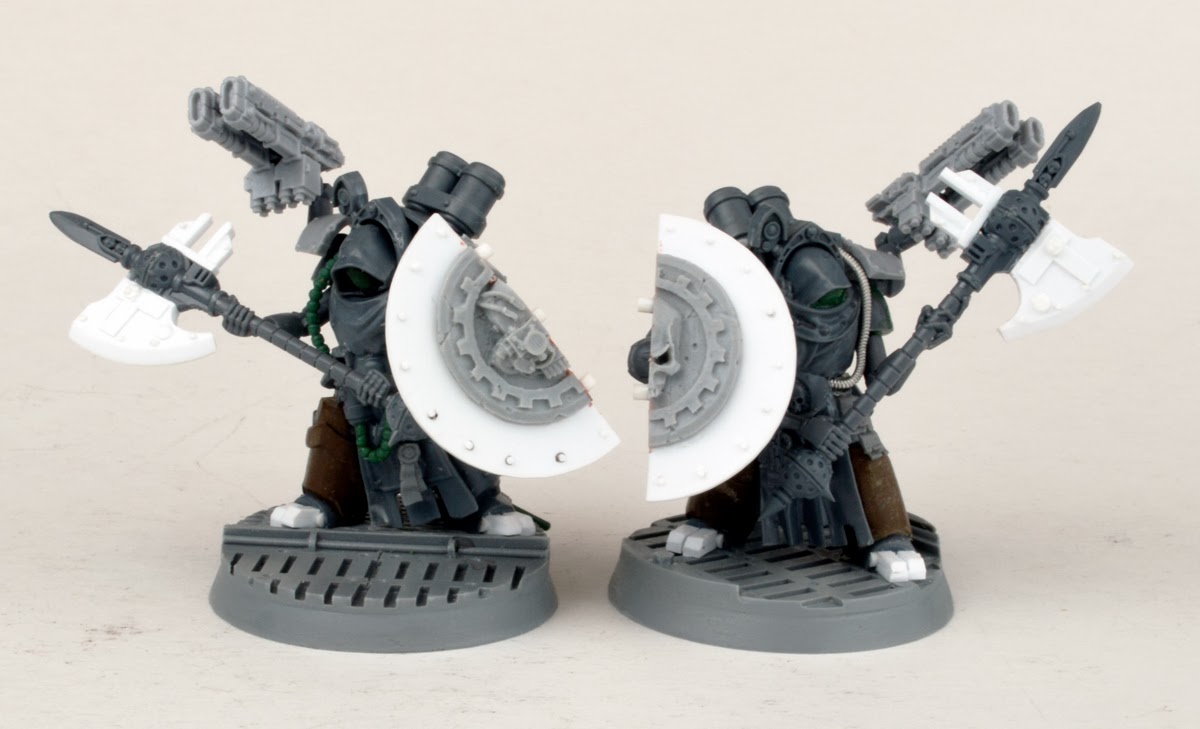 First, the Mrymidons, with their power axes, two volkite calivers each, and halved Mechanicum-symbol shields (with no "in game" effect) 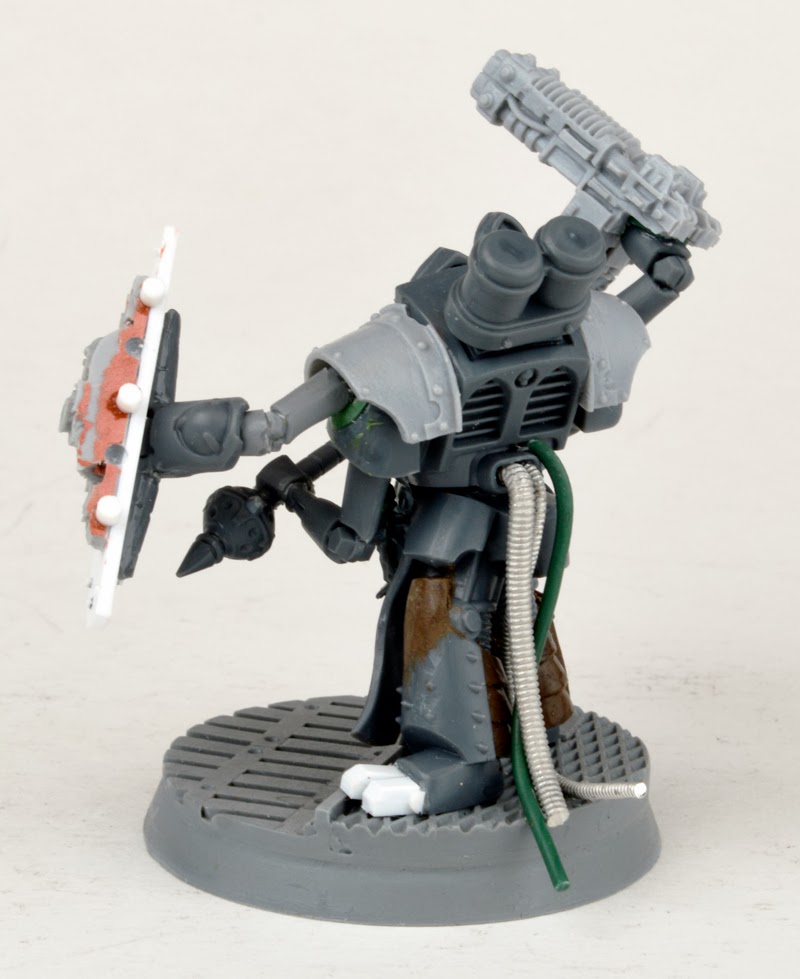 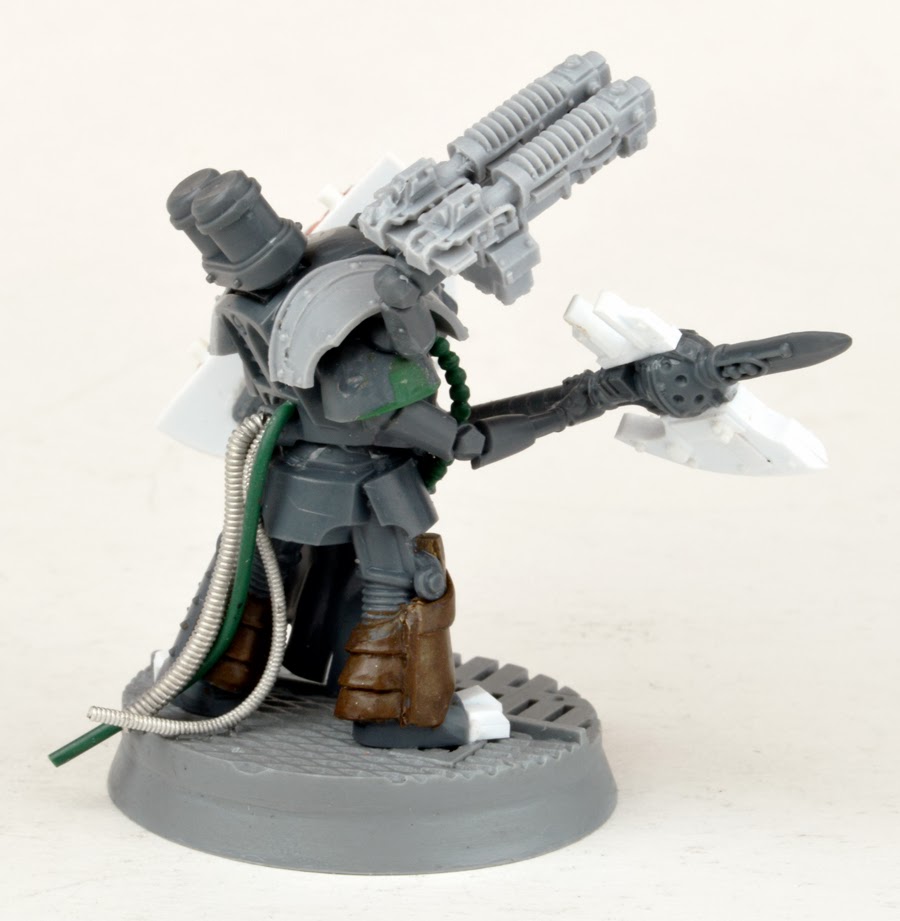 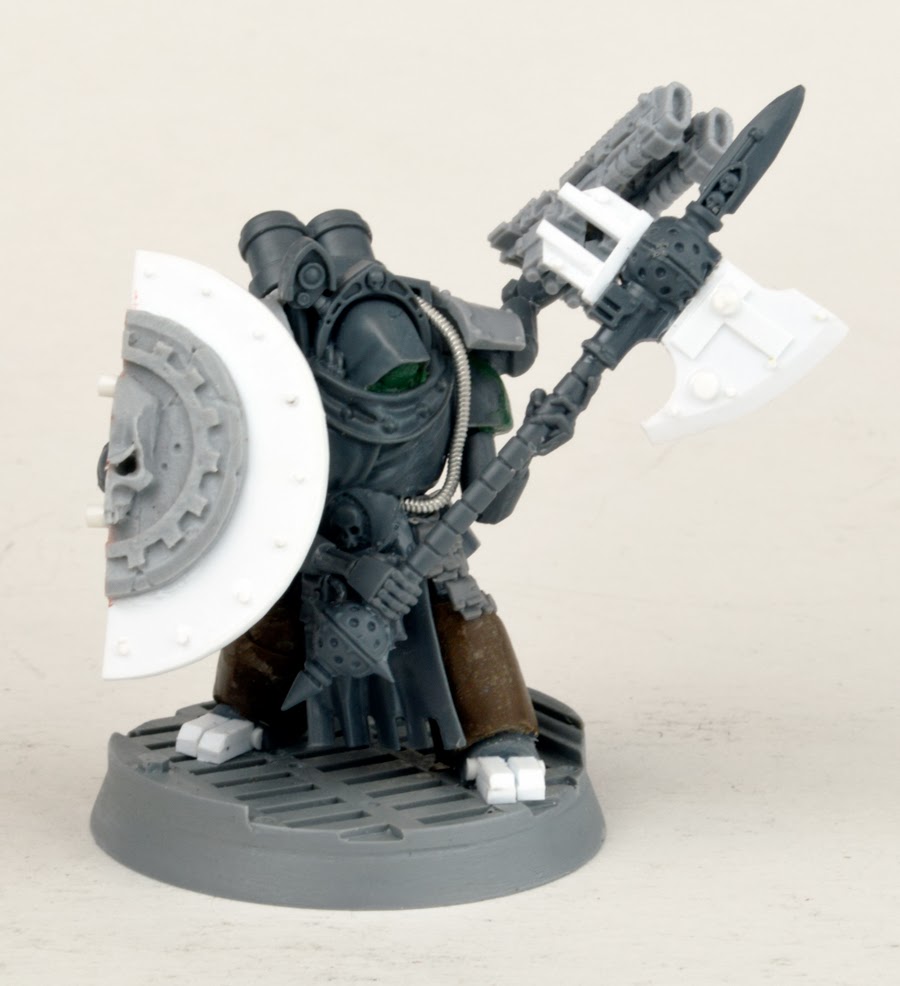 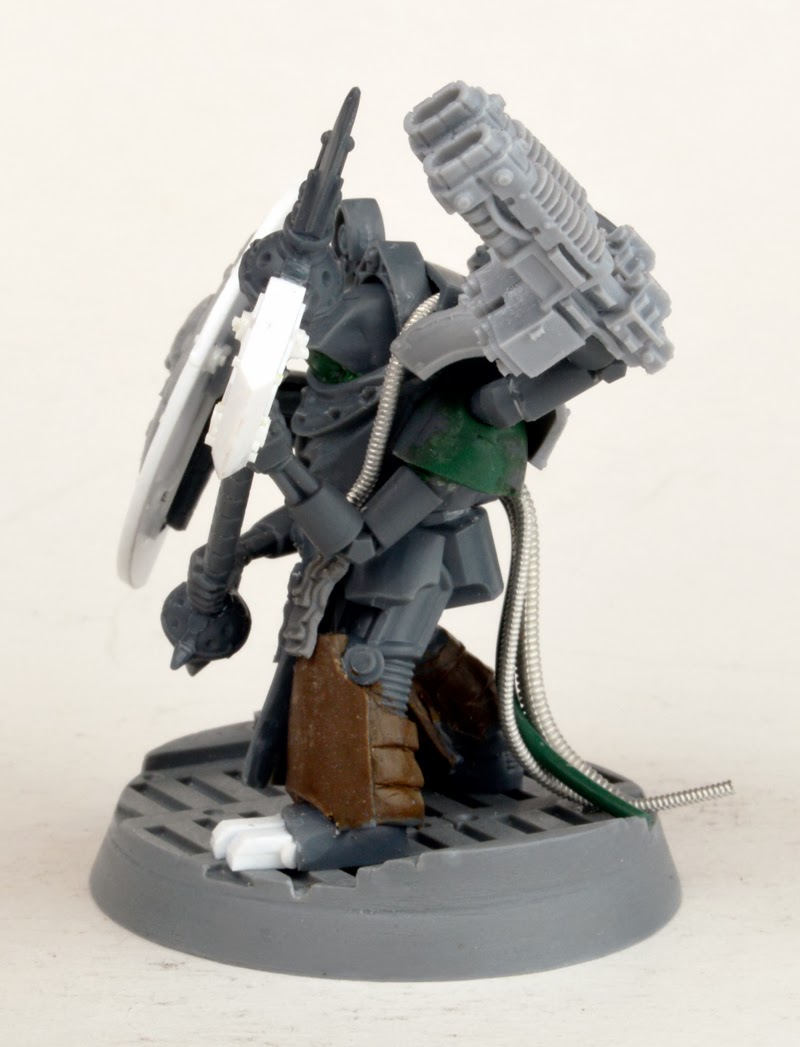 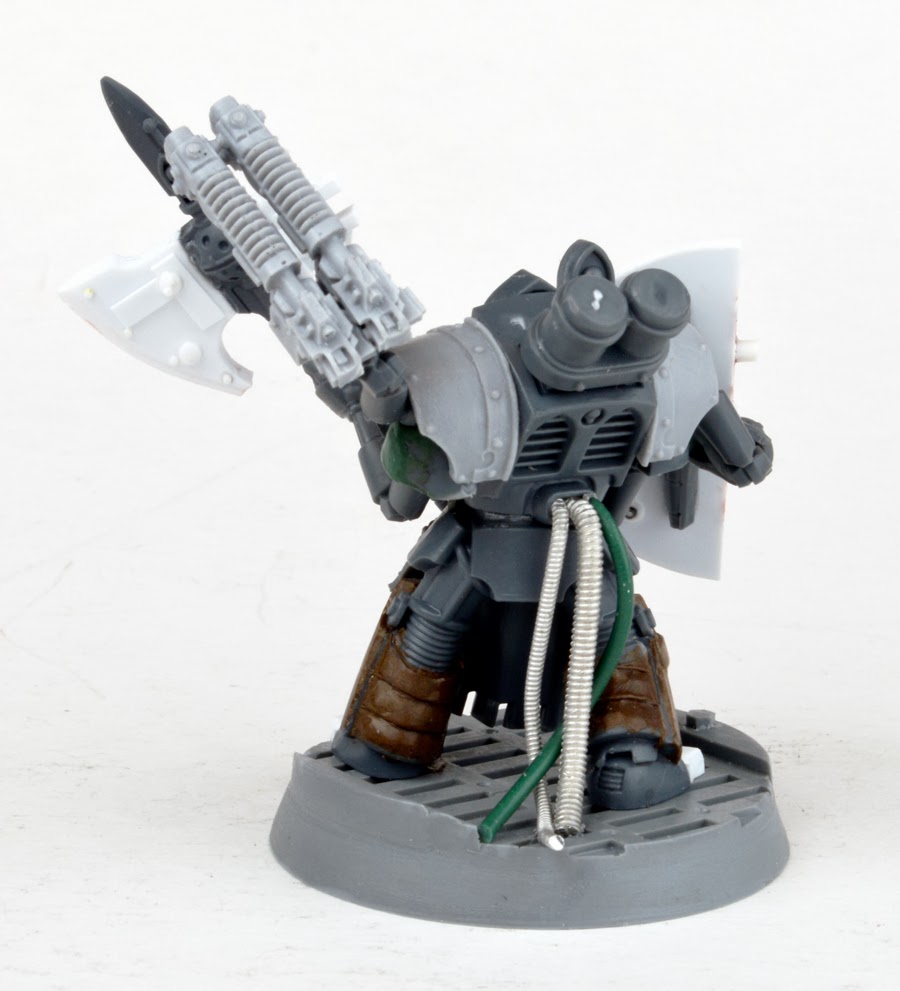 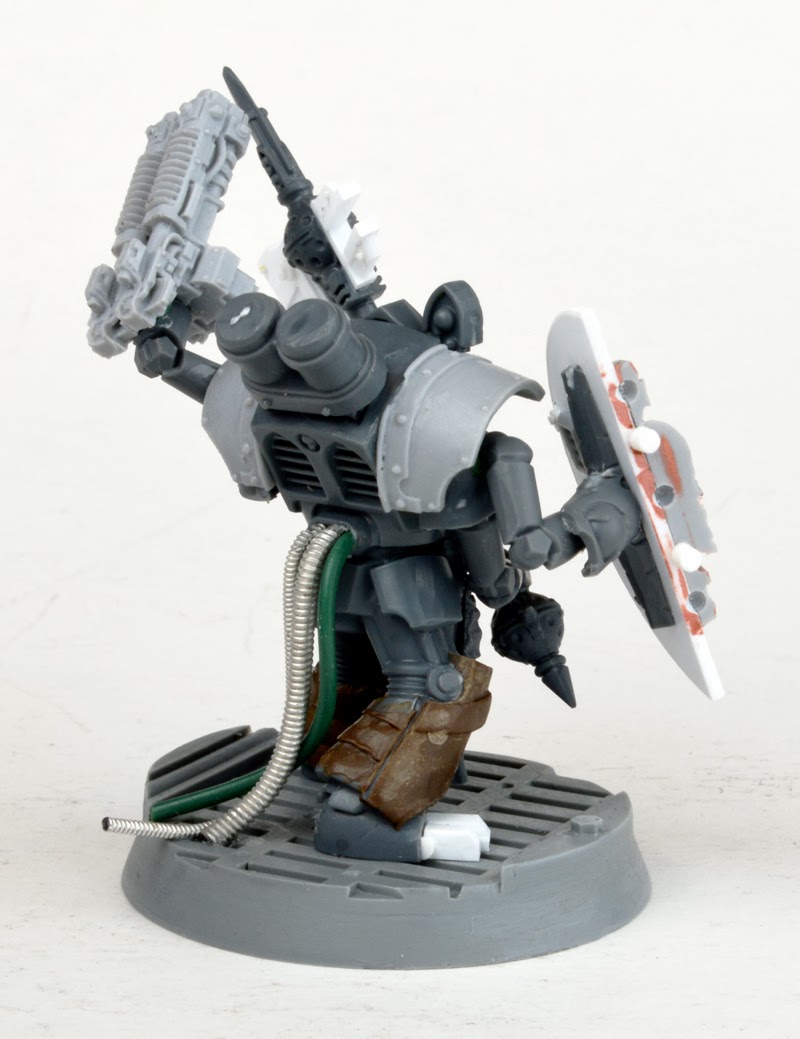 And the Mrymidon Lord, wielding his censer flail (counts as power axe), a graviton gun, and a phased-plasma fusil. 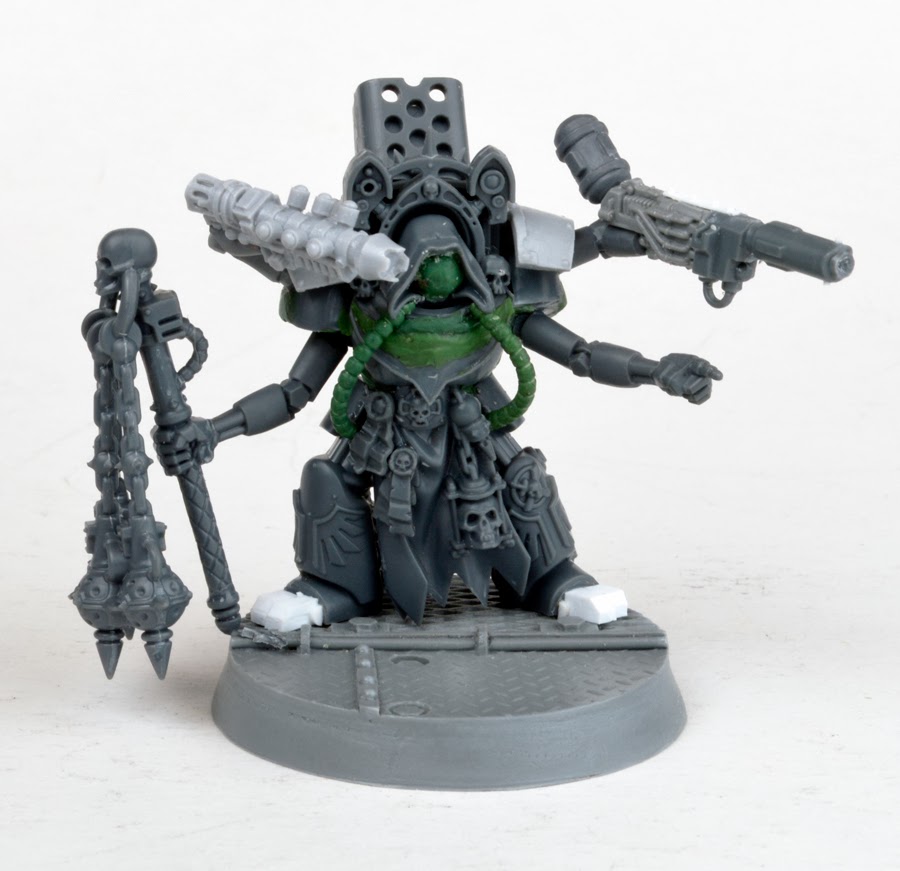 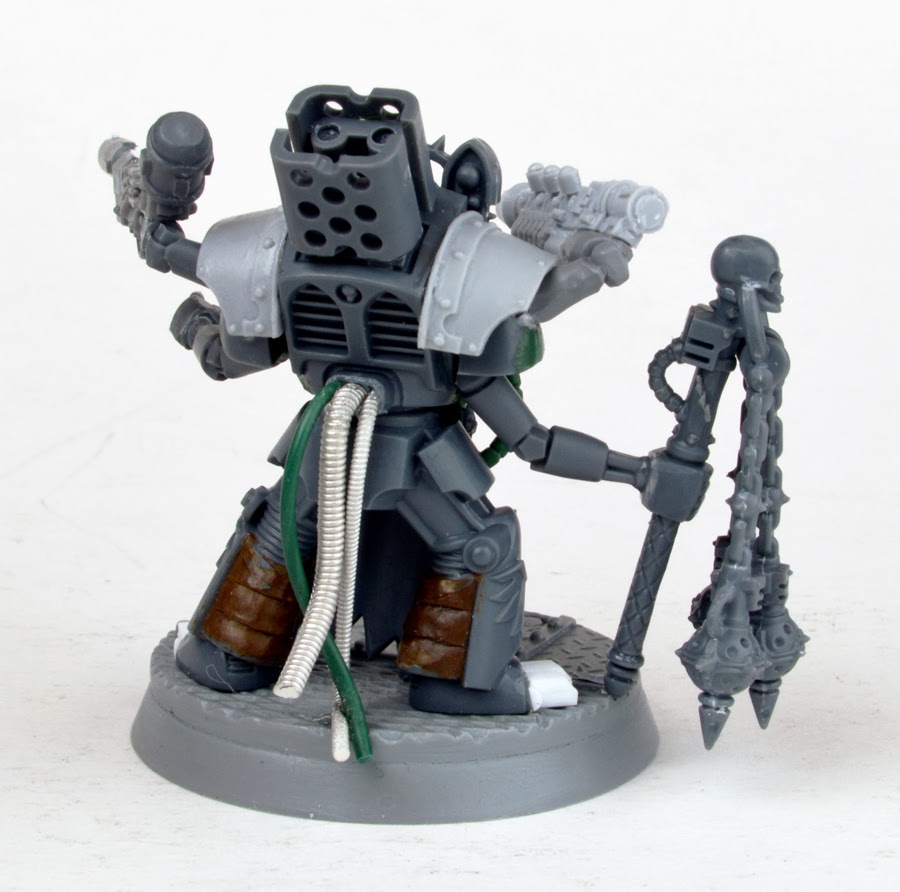 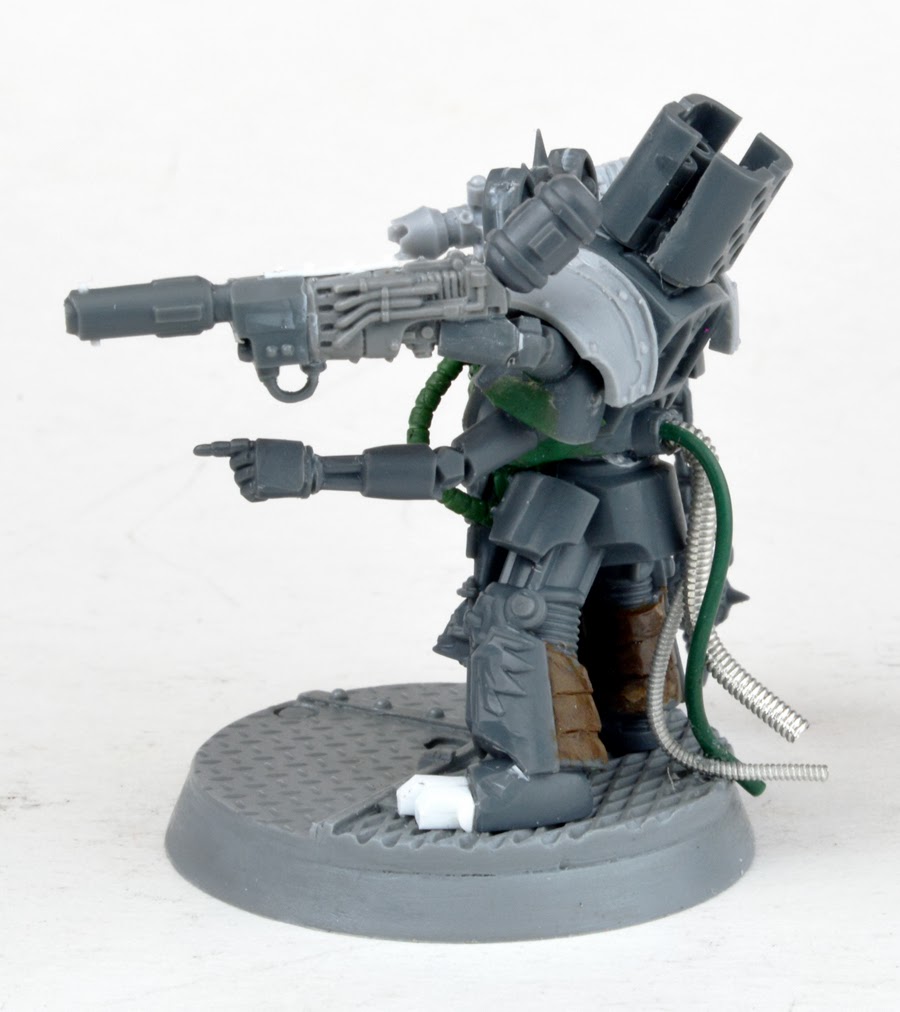 I hope you like them. I'm excited about getting some paint on them - once I've finished my Titan, that is.

Cheers
Dave
Posted by davetaylor at 9:10 AM 40 comments:

Horus Heresy - Look at what I found! 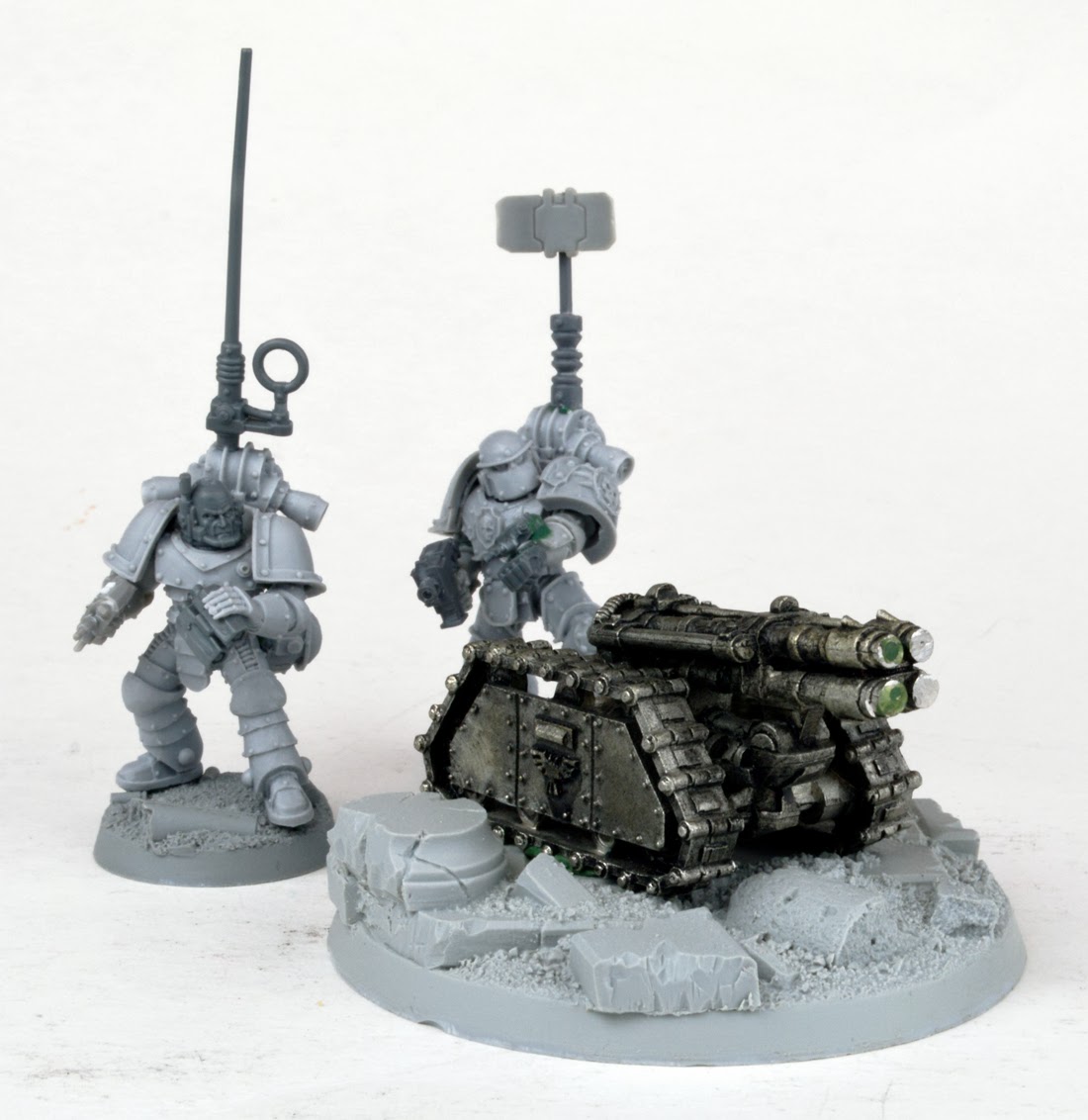 As I was doing some cleaning up/rearranging in my office the other day, I stumbled across this old Rapier Laser Destroyer. It may look at bit odd, but that's a layer of black ink over the top of the bare metal. It must, therefore, have been used in the GW Promotions studio in the US at some point foraMail Order catalog or something similar. My, how the times have changed.

Anyway, I never really had any plans to add a Rapier to my collection, but when one is dropped in your lap... 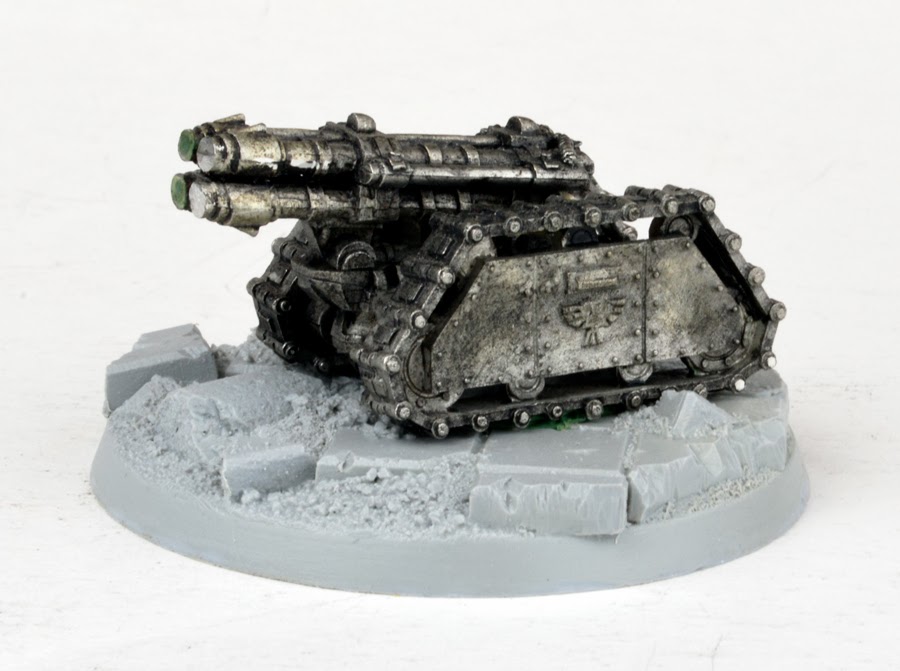 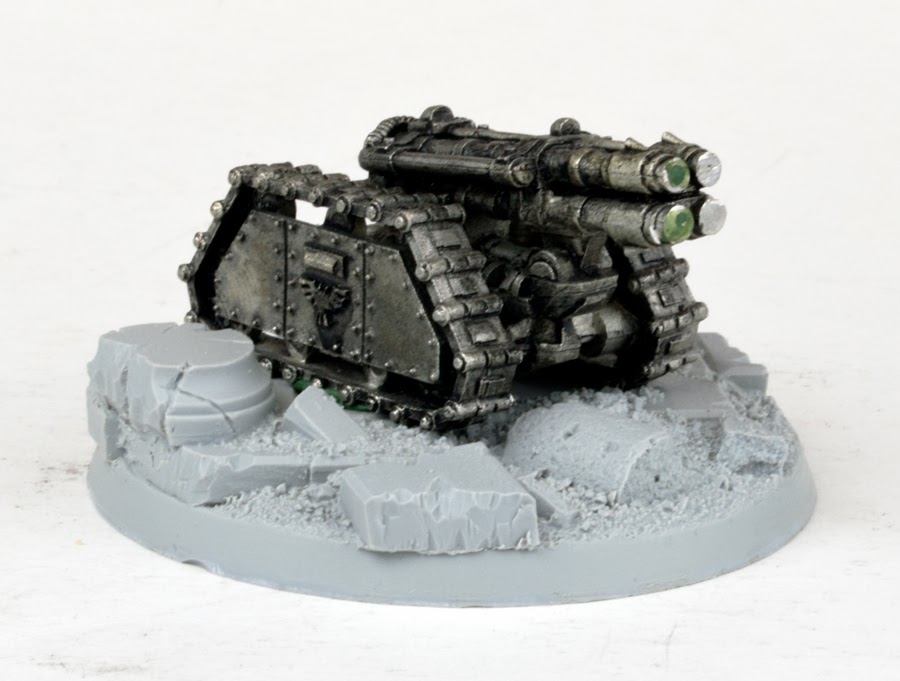 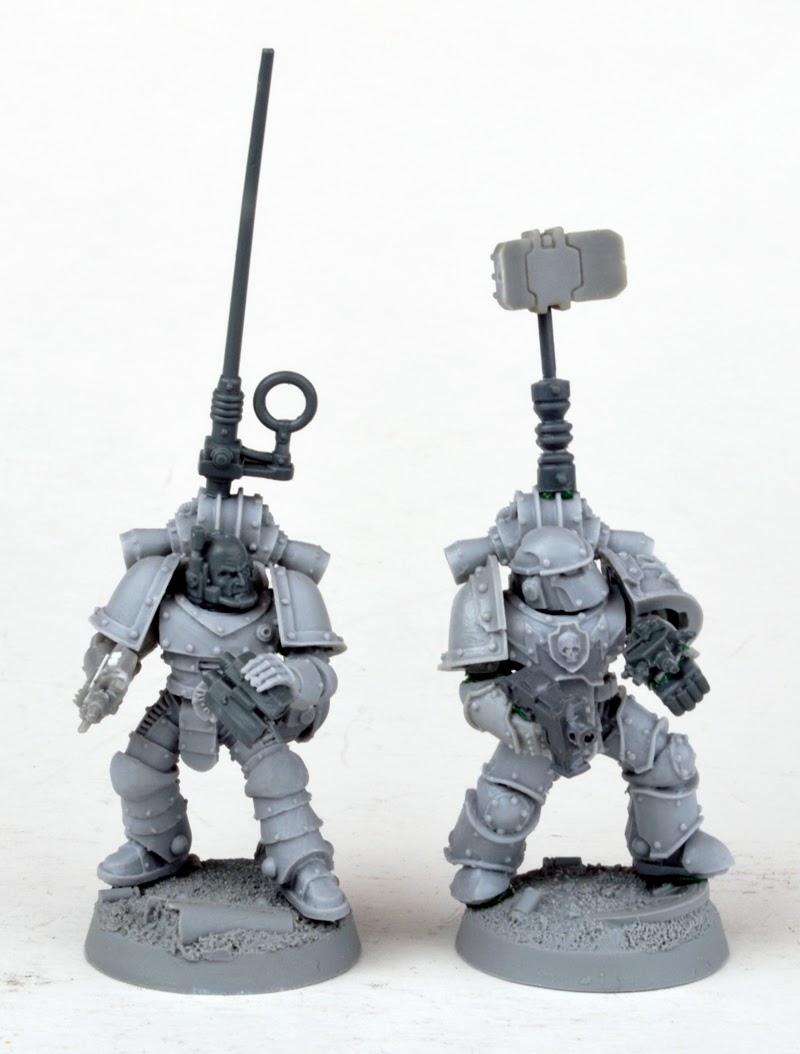 The two crew are kitbashed from various FW and plastic parts, and I think they turned out pretty well. 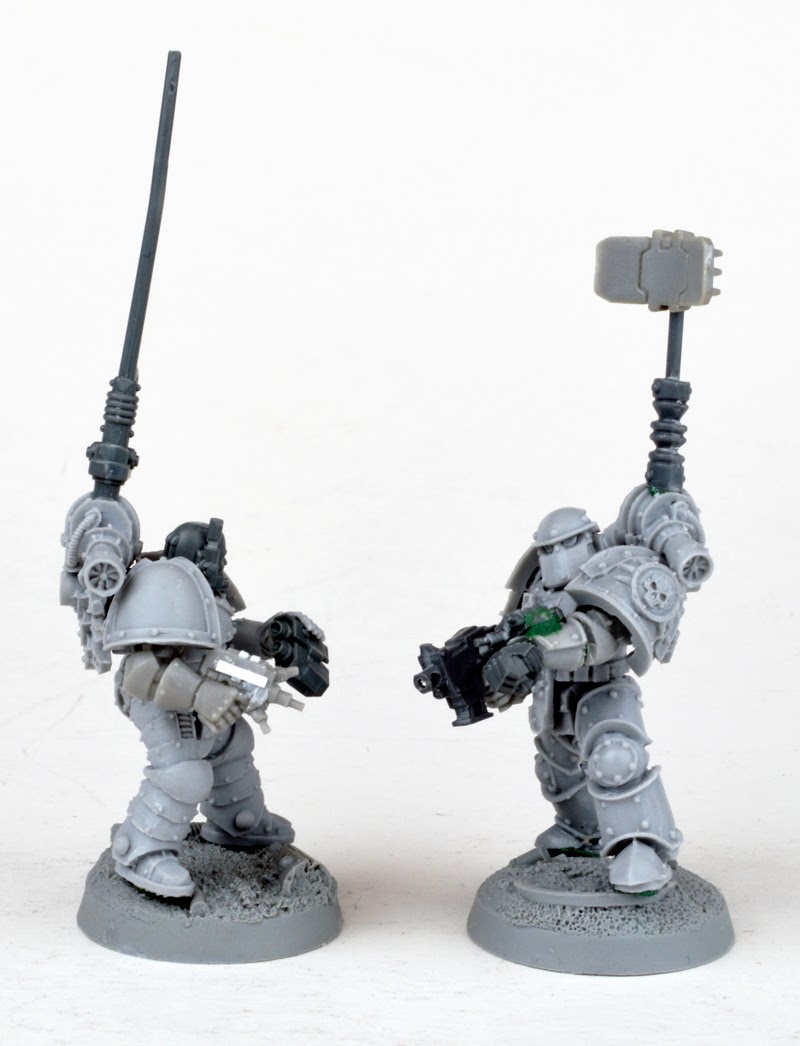 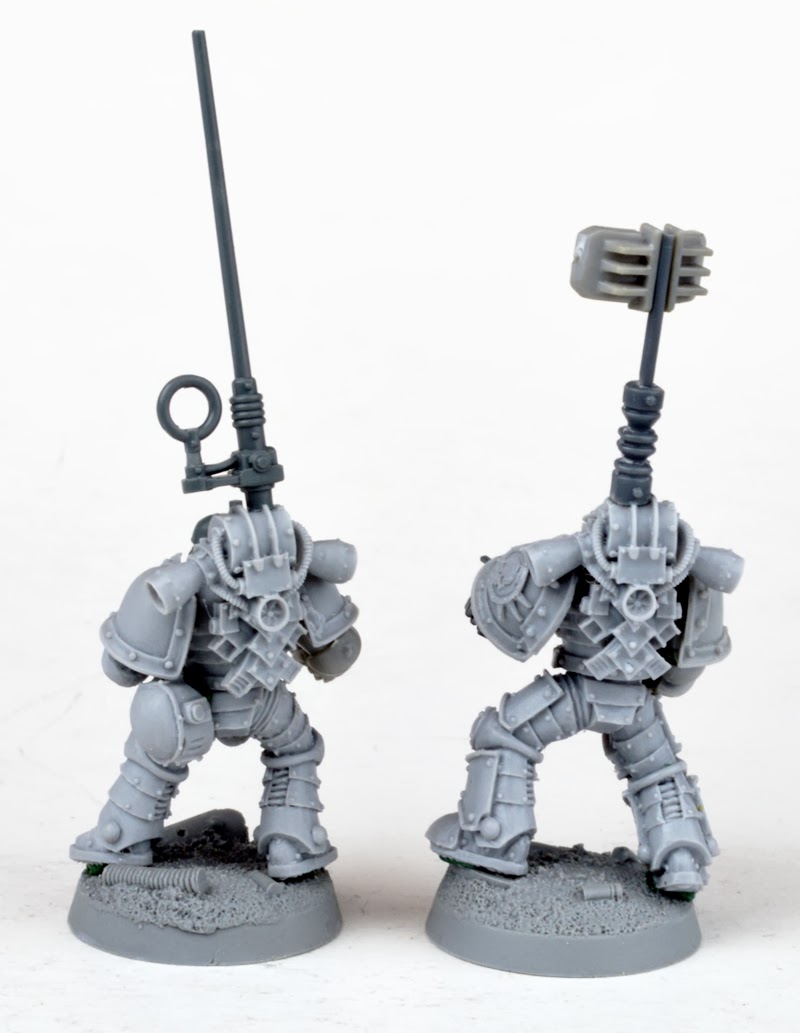 In addition to assembling the Rapier crew (and sticking the Rapier on a base), I built these five Tactical support Squad troopers, all with Volkite calivers. As a typical Imperial Guard player, I really like the idea of any weapon that causes automatic hits. Put that same weapon in the hands of someone with BS4 and I'm sold : )

Cheers
Dave
Posted by davetaylor at 8:43 AM 14 comments: 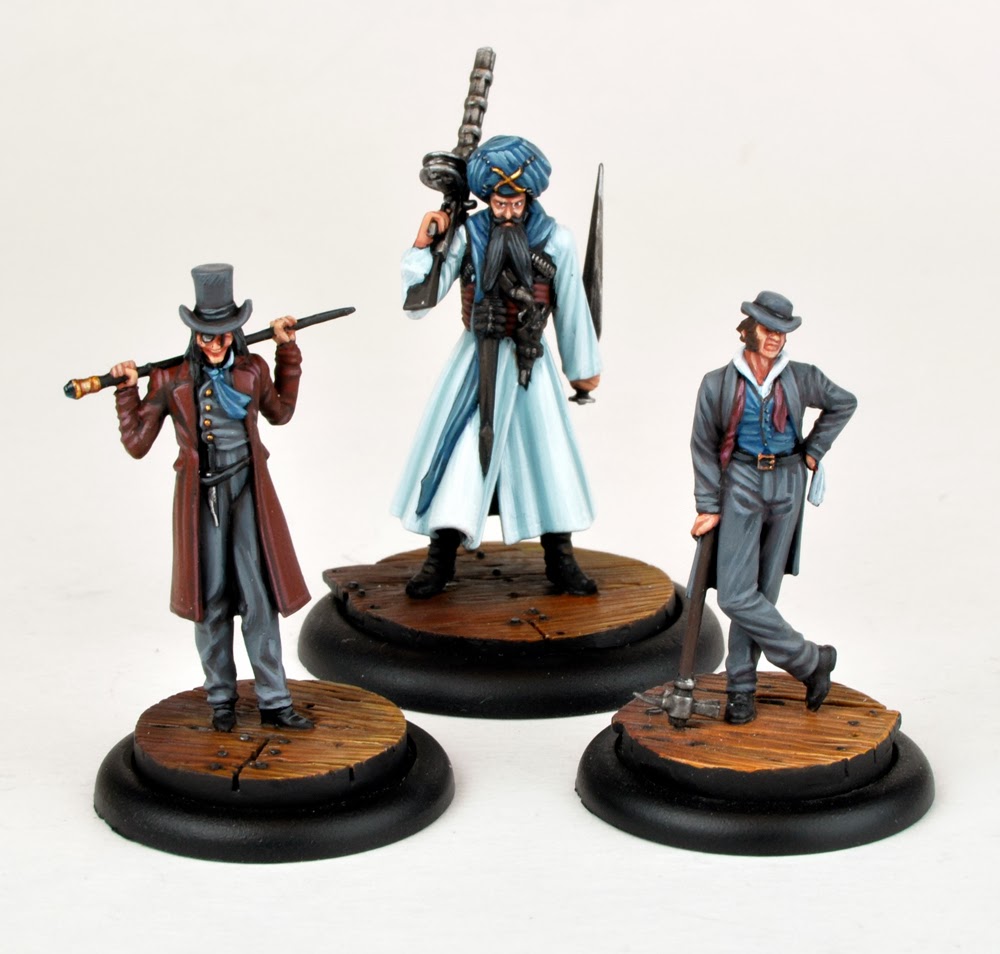 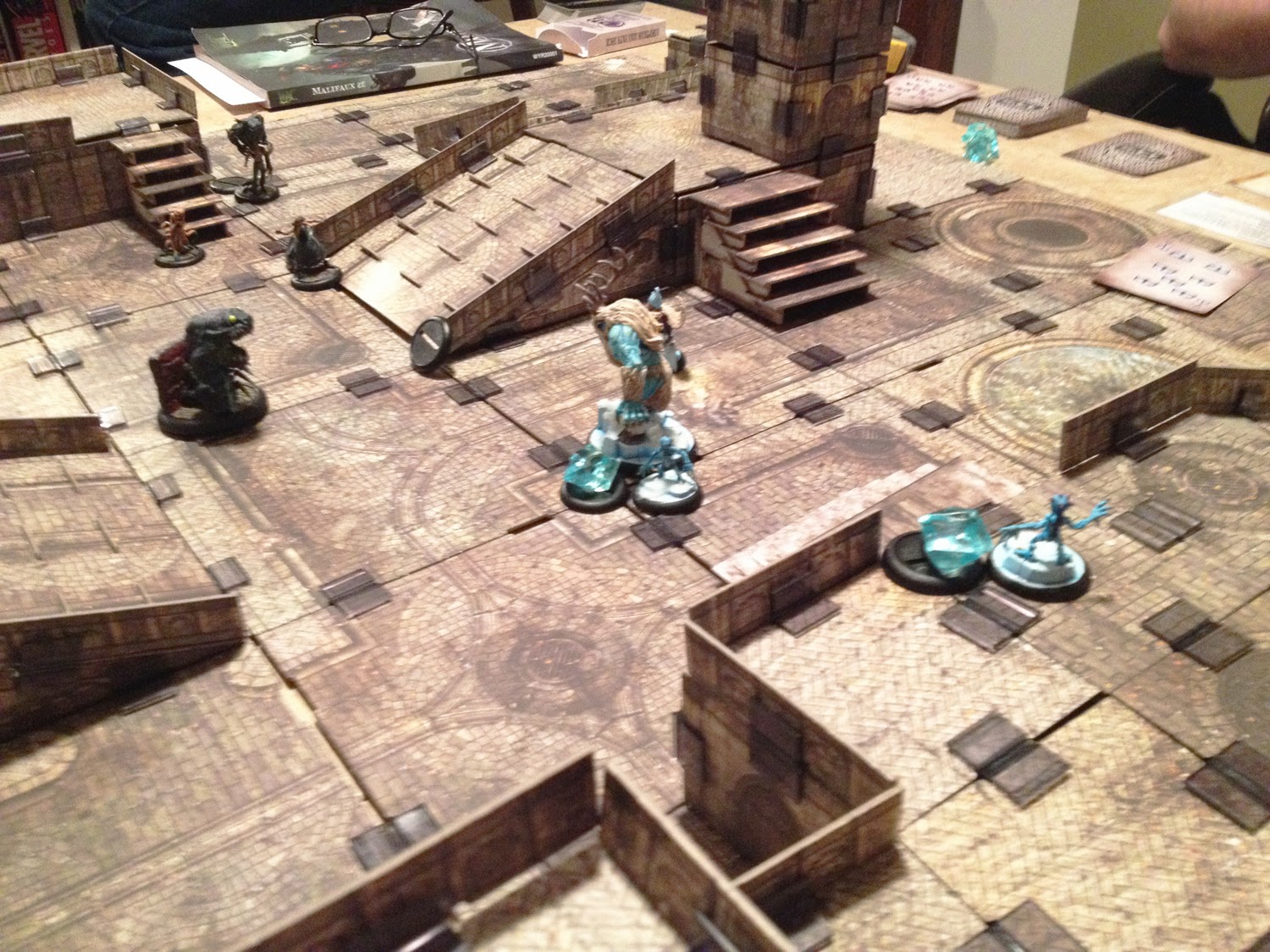 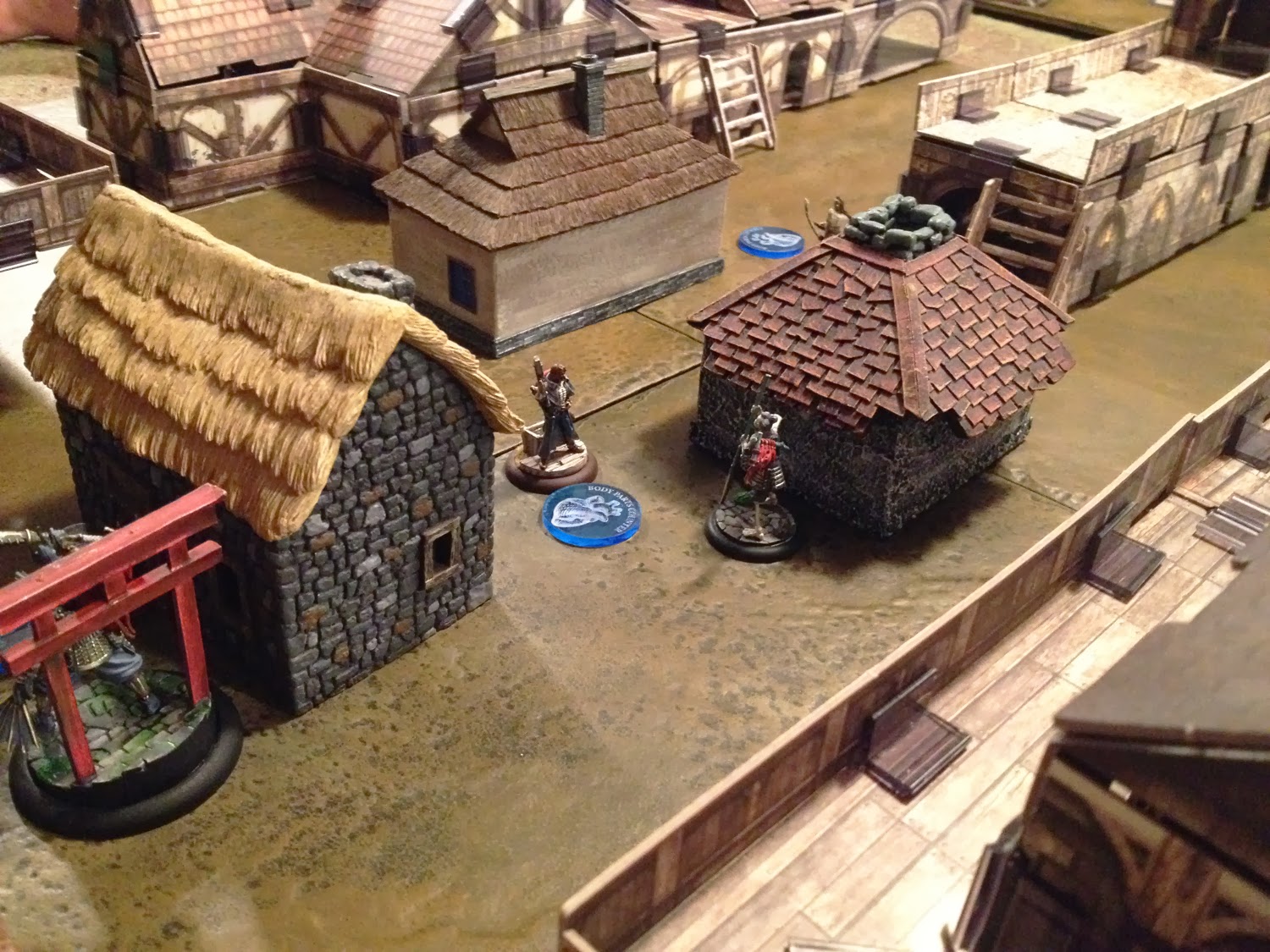 * Obviously it wasn't literally "tragic", but I felt the hyperbole was helpful in making my point ; )
Posted by davetaylor at 3:00 AM 25 comments:

I've finally had a chance to assemble the second Contemptor Dread for my Death Guard. This one is carrying a multi-melta and dreadnought close combat weapon (with heavy flamer). I wanted to give this  guy a proper hunched feel, as though he's being very precise with his shot placement.

Cheers
Dave
Posted by davetaylor at 4:00 AM 20 comments: