Time to slip in a quick update on the progress of my Lamenters. After the game a couple of weeks back, I was very excited about the success of my Death Company Tycho. Above you can see the kitbashed model I'll be painting up soon to represent my Lamenters version of this fierce character.
I didn't have an actual combi-melta handy so this one is cobbled together from a few parts to represent Blood Song, the combi-melta capable of firing the Sternguard Veteran special ammo, not too shabby on a character with the Relentless special rule. On his outstretched left hand, I've added a few strips of plasticard to represent The Dead Man's Hand, the special rules/equipment that helps Tycho become a beast in combat. I'm looking forward to getting paint on him.

A few people have been asking me "Why the square bases Dave?" when looking at the Lamenters I have underway. Now that my order has arrived from Secret Weapon Miniatures (well, it actually arrived last week), I can reveal my plans. You can see the bases in the packs above are from the SWM Bone Fields range. As part of my mission to take this bright yellow army and embed it firmly in the grimdark universe of 40K, I knew that both skulls and blood would be needed. All of my trooper models are posed with a bit of a hunch, and an "angry" posing for the arms. Now, imagine these dark and angry Marines stalking across an area covered in blood, gore, and bones. Splashing through too much gore, seeing some of it splattering up on their greaves, dripping from the teeth of their chainswords. I'm also looking forward to getting this part of the project just right. 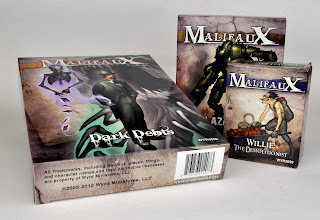 A week or so ago a nice brown box landed on my doorstep. I was unsure what it was, but as it was addressed to me I figured I should open it. Turns out it was a cool preview/review package from the guys at Wyrd Miniatures, makers of the very popular Malifaux and its lesser-known cousin Puppet Wars. Inside the box were some samples of their cool new plastic models (above), alnog with some packs of their new colored bases. While not really my style, these bases could certainly work well for many gamers when basing their particular factions. Oh, and did I mention they're plastic? Hard plastic, not plastic resin, in a similar style to the plastic sprues from Mantic and the latest sprues from Wargames Factory. 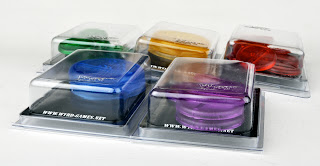 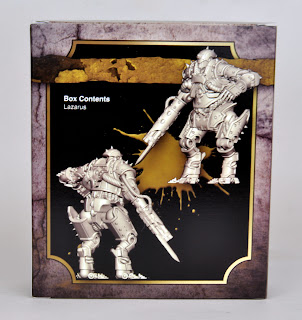 Like many of you, I like big robot suits too, so the first box I broke open was LAZARUS.

Inside I was pretty surprised to see how it was all packaged. The hard plastic sprues were unlike any I've seen before and certainly not what I'm used to (surrounded by a plastic frame, for a start). Also included in the box was the unit card for the game, and a set of assembly instructions. 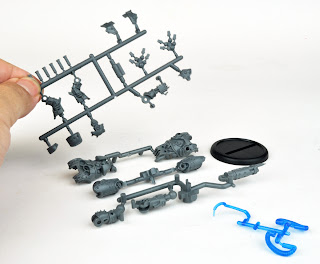 Four small sprues of hard grey plastic pieces, and one sprue of soft blue plastic cables. I assume you could save these until after you've painted the rest of the model and glue in the "glowy" bits, much like the green rods on Necrons. Or you could just as easily include them in your build an paint them another way. 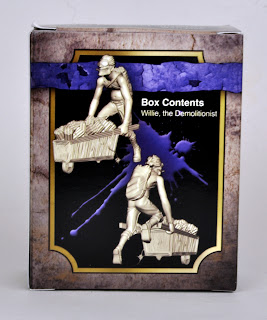 The second box I opened was Willie the Demolitionist and there he was, all on a small sprue, much like the way GW are offering many new plastic character models. Also included were his base and unit card. 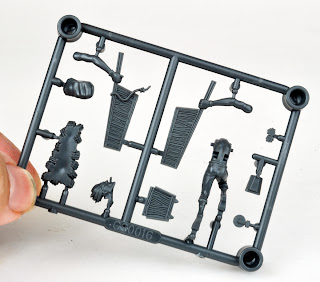 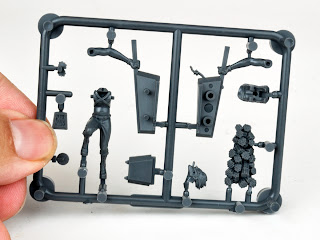 There is no doubt that Willie is nice and finely detailed. Check out those small bundles of dynamite! 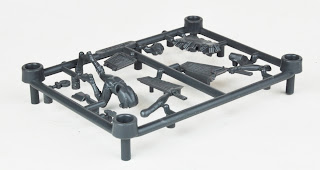 It seems the sprues are also designed to be stacked in the warehouse, much like the sprues from Wargames Factory. 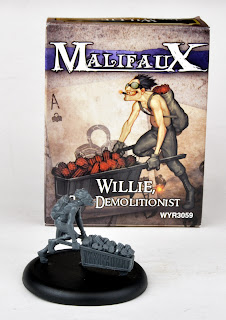 The Willie model was just so dynamic and characterful I just had to put him together. 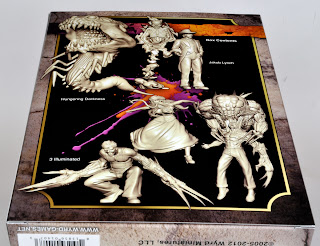 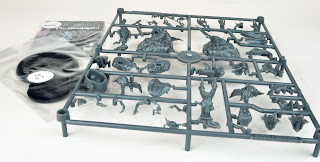 Finally I took a look at the Dark Debts box. After the two different sprue presentations in the previous boxes, I was unsure what to expect (although I thought there might be multiple sprues), but upon opening I found all the parts of the Dark Debts models on one sprue. 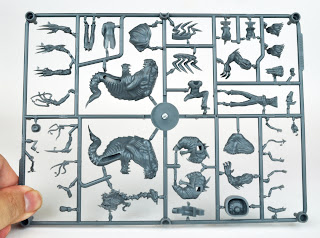 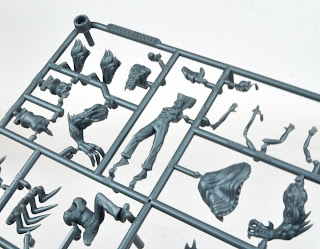 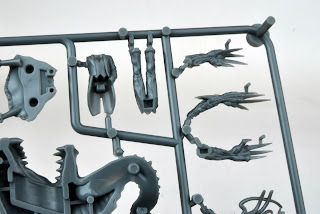 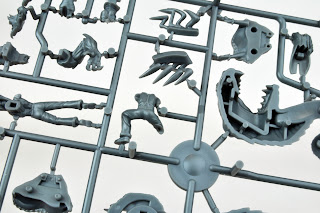 The sprue certainly had the feel of a GW special box set (like Dark Vengeance and Space Hulk) about it. Obviously everything has been digitally sculpted and then digitally sliced apart to be arranged on the sprue in the most efficient manner. As each model really only goes together one way (although there are a few options for one of the Illuminated), it was cool to see what could be done. 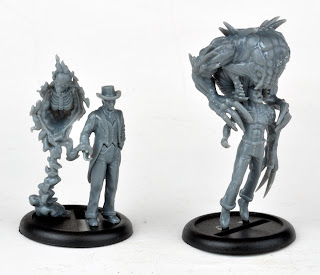 I couldn't help myself, and had to clip a couple of my favorites from the sprue. Jakob Lynch (on the left) consists of seven parts, and a full ten parts go into the making of the Illuminated model on the right!

Initially I feared that the detail might be a bit too soft, much like the first few offerings from Wargames Factory a few years ago. It seems, however, that Wyrd have been able to push past that initial learning curve and jump in at what I would consider the "quite crisp" segment of the digital-sculpting-to-miniature spectrum. The details aren't as crisp as you'd expect from GW, but then again, GW have invested vast amounts of time and money to get to where they are now. For first offerings these are certainly some VERY impressive pieces.

Even if you don't play Malifaux (or aren't interested in playing) then you can always pick up a few of these sets as they release and incorporate them into your other gaming!

EDIT/UPDATE: Here area couple of other reviews of the Malifaux plastics
• Viruk's review on Independent Painters
• GentleBen's review on Bell of Lost Souls 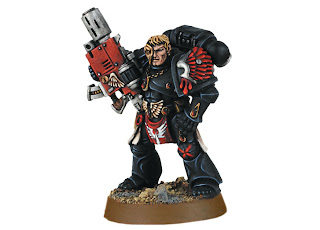 There have been a lot of miniature wargames-based campaigns launching on Kickstarter recently, and it has been very interesting to watch things tick along.

As someone who has worked in the "toy soldier biz" for the past two decades, I'm well aware of the costs involved in getting things off the ground, and then the momentum needed to keep things rolling. I'm fairly certain that sometime in the next few years that someone will write a thesis on the pros and cons of it all.

One thing that many of us will have seen (or even felt ourselves) is the level of excitement surrounding a successful campaign, and even more so with a wildly successful campaign (like Dreadball, Zombicide, or - the grandaddy of them all - the Reaper Bones campaign). We get caught up in what seems like a wonderful thing, and we're reluctant to miss out.

Well, fortunately I've been able to hold off on jumping into the "incredibly effective pre-order system" until now. Yesterday I pledged my support for the Dreamforge Games campaign and I'm looking forward to getting a hold of my Leviathan Mortis and Eisenkern APC next year.  Why this campaign Dave, and not the others that promised crazy rewards (like 250+ minis at the $100 level)? Well, the other minis didn't really speak to me, I just wasn't interested in having a bunch more models around I'd never paint. However, I've been excited by Mark Mondragon's designs for the last few years. Once or twice my hand even hovered over a button that would've seen me purchasing the original resin models.

So, I've finally taken the leap. Head on over to the campaign and see if there's anything there that "floats your boat", and if there is, think about jumping on it asap. Less than two days to go in the campaign.

Lost in the Warp reaches 200th post, running a competition! 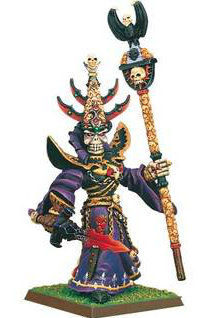 One of the most fearsome characters in all of Warhammer lore, with one of the least
fearsome models. Picture © Games Workshop, used without permission.

Just a quick post to guide you towards a great blog/site/forum run by a friend of mine - James Craig. James is not only a great guy, but an excellent modeler and painter, so I urge you to head to his blog, Lost in the Warp, and dig through the archive of excellent material...oh, and enter his competition!

PS. Why the use of the Nagash pic? He certainly grabs some attention, doesn't he? That, and James used the pic too ; )
Posted by davetaylor at 2:10 PM 5 comments:

Two things quickly: the first are the next five Lamenters Death Company I'm working on. You can see them above. Still yet to finish the parchments, silver, checks, and black.

Then here are a few Panthers I'm working on for a small commission. I'll show you some WIP shots as I go along. Should be interesting working on some Late War schemes after last year's Early War Germans.

If you'd like to chat a bit more about painting Flames Of War tanks, come and hang out to the Dropzone Games Grand Opening tomorrow. I'll be leading a class on FOW Tank Painting from 3pm : )