The French in Egypt

It's been a pretty crazy time lately. Lots of things to build, convert, paint. Lots of different projects, but I must say I'm really enjoying painting up these models for our Guns Of April "Napoleon in Egypt" game for AdeptiCon 2014.

Above are a couple of grenadiers from the 69me Demi-Brigade de Ligne, flanking a Sergeant character from our French Infantry lists (although I'm using a converted Dromedary Corps standard bearer for this guy).  One of the interesting facts about the French expedition to Egypt in 1798 was that after the Battle of the Nile, the French suffered incredible supply issues. To address the issue of uniform resupply they redesigned it, and were forced to assign a wide variety of colors to the Demi-Brigades (there was simply not enough indigo dye available to issue uniforms in the typical French blue). These colors included: Light Green, Sky Blue, Red, Purple, Brown, Dusty Pink, and Violet.

While not many wargamers undertake the collecting of an army-sized force of the period, it's a bit of fun to tackle this aspect at a skirmish scale. 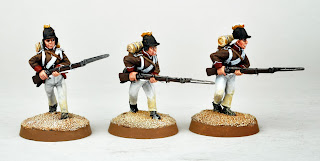 Above are three fusiliers, again from the 69me Demi-Brigade de Ligne. They are wearing the Kleber helmet of the Egyptian uniform.

And for a little change I painted these three (above) as chasseurs from the 22me Demi-Brigade de Legere.

And finally for this post, here are three of the four French Savants from Brigade Games, an excellent pack full of character. In our gaming one of these guys will accompany my Infantry force, another one will hang out with the Dromedary Corps.

Last, but not least, here's the knee pad for my Reaver Titan of Legio Crucius : )

Cheers
Dave
Posted by davetaylor at 4:00 AM 12 comments:

On Friday I posted a teaser pic of a Warhound Titan. This little beastie is the Venatrix Nocturna, and she's the titan my friend Dave Pauwels will be bringing along the to Adeptus Titanicus game at AdeptiCon next year. Dave is an absolutely brilliant painter (as his many awards will attest), but he'll also admit he's quite slow. Therefore, to avoid missing out on the game, he asked me to assemble her for him. 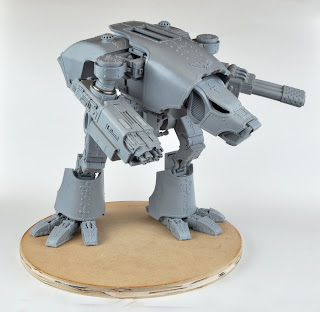 About two years ago, I assembled and painted a Reaver Titan, so some of the pain of that ordeal had worn off. I jumped into this task in a fairly positive way; soaking and washing all the many, many parts.
I read through the FW instructions several times and, after cleaning up all the parts (trimming off almost three pounds worth of resin pour channels and "tabs"), I started building her from the feet up.

In these photos you can see a deconstruction, as Dave will be painting the interior. I had to make sure there was plenty of accessibility to all the fiddly details inside. Dave also wanted some flexibility with his weaponry (who wouldn't?), so I've added very strong rare-earth magnets to each upper arm, allowing for a fairly straightforward swap of weapons as required.

Anyway, I'll let most of the photos do the talking : ) 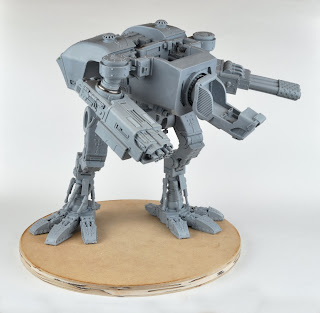 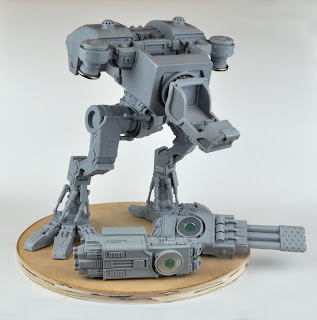 Above you can see the washers embedded in the guns. These are more than enough for the magnets to grab onto : ) 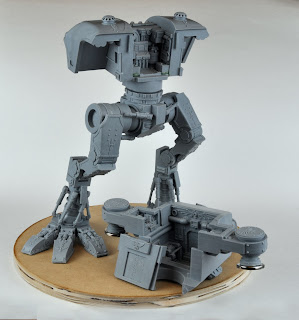 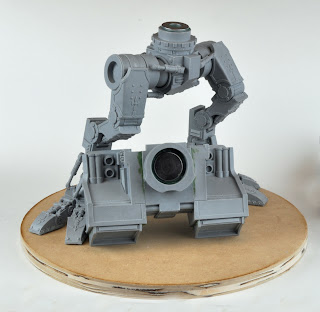 For easy of packing/transport once Dave has painted the model and attached the front of the torso to the rear of the torso, I added another magnet to the rear torso and a washer to the column above the waist. 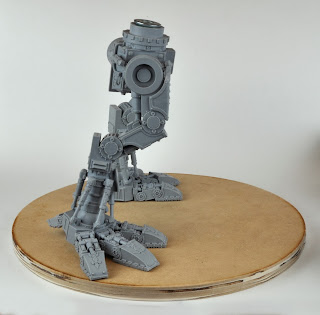 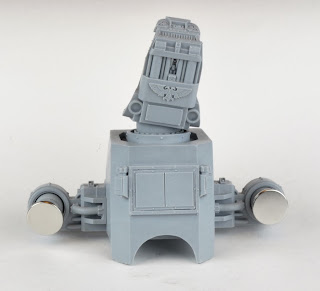 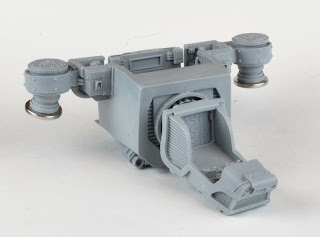 It seems the Warhound comes with four shin plates, allowing you to make it quite Imperial (with two big eagle pads) or less so (as I expect Dave will be doing with this traitorous beast! 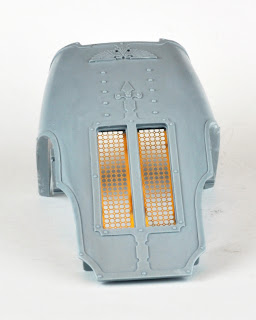 There's even a sheet of etched metal for the grille looking down into the reactor section.

And finally, instead of gluing in the resin cabling to the weapons (and destroying that flexibility), I replaced them with small lengths of network cable. These are glued into the body, and can slip into the sockets at the back of the weapons Dave sees fit to load her out with.

I hope you've enjoyed these photos. I'll have some more of my new Reaver build and paint coming in the New Year. I'm working on a Loyalist Titan for the very same game!

If you have any questions about the build, just ask.

Cheers (and Merry Christmas!)
Dave
Posted by davetaylor at 6:36 AM 13 comments:

Camels and other large beasts! 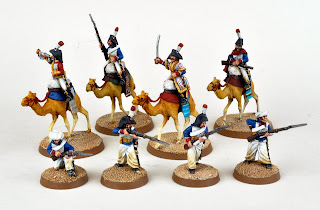 Just a quick post here to guide you towards a quick post on Guns Of April. There you'll be able to see a little bit more about the French Dromedary Corps models I've been painting up for our gaming at AdeptiCon 2014!

But speaking of AdeptiCon 2014, there's another game I'll be playing in. Does the photo above give you a clue as to what it might be?

More on that soon. 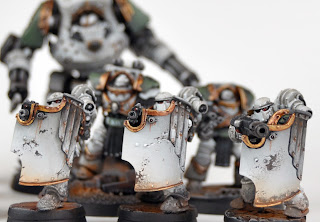 Here they are, my (initial) take on a Killzone team for the Death Guard. I know I'll need to paint up some more models, as some of these no longer fit with my plans (or quite fit into the currently constantly updating rules). Amusingly enough, my friend who has been working on a set of rules has actually been working with Big Jim of Galaxy In Flames. Big Jim put up the latest set of rules on his blog on Sunday. Why don't you head on over and check them out. 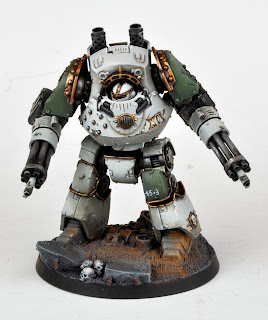 But on to the models. Most of these were painted last time you saw them, but I was still a bit iffy on the final basing. After consulting with a few friends, and taking some good advice from a multi-Sword winner, I've gone with this basing approach. A dark/mid grey, washed with a variety of colors (including purple), followed by some mid/light grey drybrushing, and then a dusting of Terracotta Earth powder from Secret Weapon Miniatures. I hope you like it 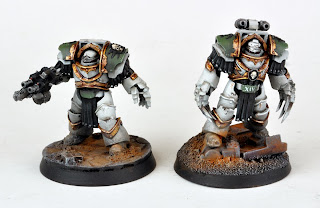 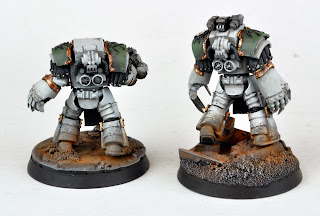 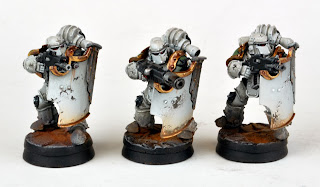 Until next time, happy painting!

Cheers
Dave
Posted by davetaylor at 6:26 AM 17 comments: 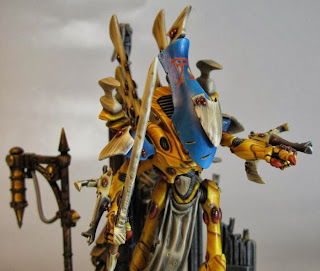 The first announcement today is to draw your attention to the new Painting Service being run by an old friend (from way back in the day) Jonathan Palermo. Jonathan and I both worked for GW in Australia, but now he's in Canada and I'm in the US. I guess we love to travel ; )

Anyway, head to his blog - Seismic Miniature Painting Studio - and check out some of his work. If you're in the market for a model, unit, or army, make sure you think of Jonathan! 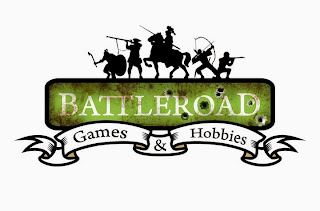 My friend Alex Akers, owner of Battleroad Games and Hobbies, has recently taken up a new job and has sadly had to come to the decision to close down the Battleroad business. During his closing period he's running a closeout sale that you may wish to take part in. From Alex's Facebook post:

"It is with a heavy heart that I am announcing the shutdown of Battleroadhobbies.com. This was not a decision I came to easily and has to do with family issues as well as not having the time to work on the Katana Miniatures games project. Based on these factors as well as a few others I have decided that the best course of action is to shut down Battleroad Games and Hobbies LLC and focus my energy on Katana: War of the Oni, as well as my family. Sadly their is not another company willing to take up the mantel of ownership so it's just best to shut it all down.

Based on all of this I have decided it's best to conduct a 40% off sale of all items in stock on the webstore. When checking out use the code closeoutsale and that will give you the 40% off. It has been a great few years operating BRGH and meeting many of you personally. I look forward to bringing our community my teams Katana miniatures game in 2014 and would like to thank all of those who have supported and shopped with us over these past few years. We will be officially shutting down Dec 31st 2013 at 1159pm so the sale will run until then. 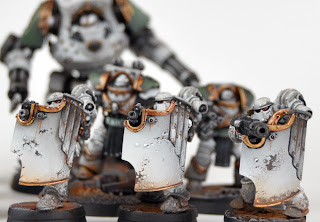 Still busy times here in the Taylor household, but hopefully things will calm down in the new year.

Now that my client has his Horus conversion in hand, I can reveal the paintjob. I hope you like it. 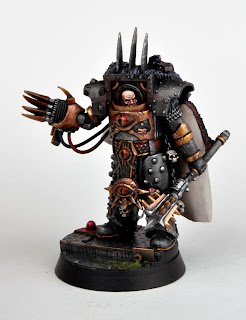 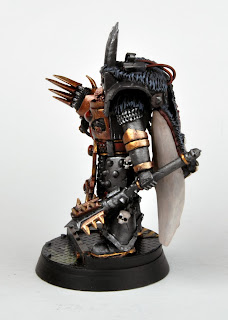 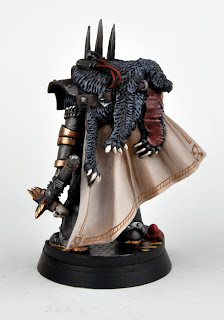 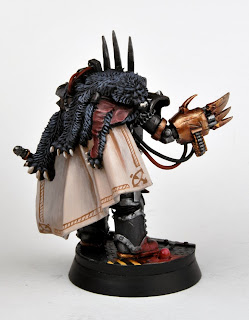 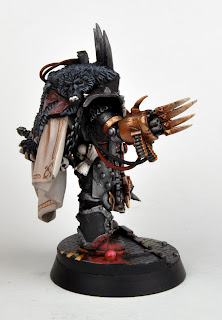 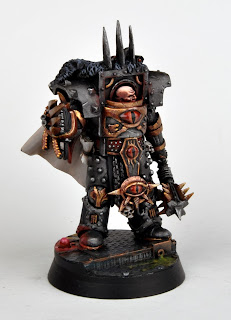 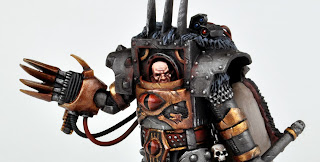 Cheers
Dave
Posted by davetaylor at 7:42 AM 18 comments:

Horus Heresy - The Man himself! 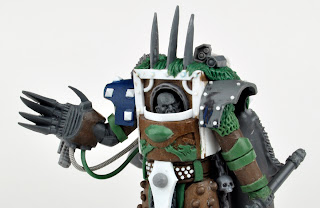 Sorry I haven't posted up the lastfew models from my Death Guard project, but I was busy working on this guy over the weekend. He's a new commission build - Horus Lupercal - based on the great artwork originally from the Horus Heresy card game. 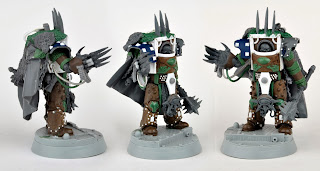