There has been some more progress this week on my Lamenters/Badab War army. Namely wrapping up the test model for the Death Company (above) and starting on the next four models (below).

Originally I was reticent to include any Death Company or Sanguinary Guard in my army as I thought their primary colors were white and gold respectively. I wanted this army to be grim, dark, and full of anger. White just didn't speak to me. When I took another look at the Imperial Armour book I noticed that the Lamenters Death Company were actually black, I changed my mind very quickly.

One change I have made, however, to the scheme is to replace the red Xs of the typical BA Death Company with the bright yellow of the Lamenters, providing a stronger link back to the regular Chapter Marines.

These four are nearing completion. Just a bit of touch up, then highlighting the black. Once I've painted the next five Death Company bodies, I'll paint up the nine backpacks I need to finish off the entire squad.

Anyways, I hope you like how they're coming along.

Someone asked, in a recent post, if I have a list ready for the army. Well, I kind of do. Here goes:

HQ: Unsure at the moment

If you have any thoughts, feel free to leave them in the comments below, or let me know next week when you visit the Grand Opening Event for Dropzone Games. I'll be hanging out Friday, Saturday, and Sunday, so make sure you drop by! 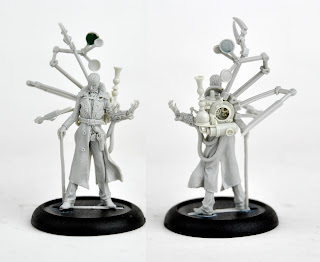 Well, I haven't had a chance to get too much done this week. It was not only a busy one as I got back on track with Wargames Illustrated work after we delivered our monster issue to the printers the week before, but I was struck with a nasty cold fresh from the kiddies at my daughter's new pre-school. Parents reading this will know what I'm talking about : (

Anyway, I wanted to post this earlier in the week but found myself asleep each night before I had the chance. I recently received an excellent package in the mail all the way from the UK. James Griffith is a hobbyist who has recently decided to capture and corral a number of wildly entertaining visions and get together with some very talented artists to bring these visions to life in the form of Infamy Miniatures.

James (via Infamy) is bringing to life all the well-known characters from Victorian London folklore with an extremely dangerous twist. Sherlock Holmes and Watson are not the helpful chaps you might remember, Jekyll and Hyde will surprise you too, as will his take on Peter Pan and Tinkerbell.

James recently ran a very modest Indiegogo campaign that was successfully funded and those funds will see the planned models and gaming world start to flow from Infamy Miniatures, much like the muck from London's sewers into the Thames.

One thing that struck me as I opened the package containing Sherlock Holmes is that the style of the Infamy Miniatures is quite different to almost every other range out there. Above you can see Holmes standing ready with his cane and steampowered mechanical devices, but it's not until you see him compared to the Lamenters Assault Marine below that you get a sense for how tall and slender this model really is. 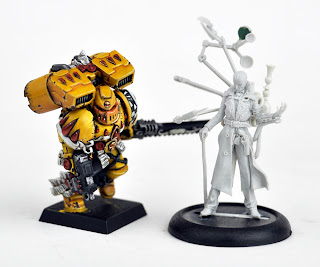 Cast in a superfine resin, each piece is amazingly detailed and everything goes together so smoothly. As you can see in the model above, there was only one blemish in that one of his magnifying glasses was a tad thin, easily fixed by the application of some greenstuff.

I'm considering painting up Holmes standing in front of a section of wall from the Garden of Morr set, just to emphasize the grimness of the alternate world James is creating.

With Games Day behind me (and all the work for Armies On Parade and Golden Demon with it), it is finally time to turn to my future projects and try to get them in some sort of order.

Above you can see the test model for my next 40K project. It's been quite a while since I painted up a 40K army, so it's going to be fun getting stuck back in. This model is an Assault Marine from the Lamenters Chapter, one of those who sided with Huron Blackheart during the Badab Wars. But more on this later.

My future painting plans include:

• Around 1,000 points of Lamenters
• Five regiments of Union infantry for our Guns of April 2013 project
• Finishing off the first regiment for my Napoleonic Russian army
• Painting up the cool Witch Hunter model from the new Empire list
• Some Americans and Germans for Flames Of War

And getting into some serious planning for my 2013 Armies On Parade entry ; )

What are you guys planning?

Email ThisBlogThis!Share to TwitterShare to FacebookShare to Pinterest
Labels: Guns Of April, Lamenters

Well, it'd been over two weeks since Games Day in Chicago, so I figured it was time to throw up pics of the models I entered in Golden Demon. Before we get to the photos, however, I must say that I liked the new set-up used by GW at the show, and bringing the GDs back into the main hall was, in my opinion (and despite the noise) was a successful move. 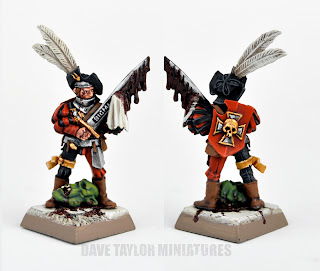 Here's my Warhammer Single entry. I wasn't expecting too much from him, but I figured it was worth a shot. Result - Finalist. 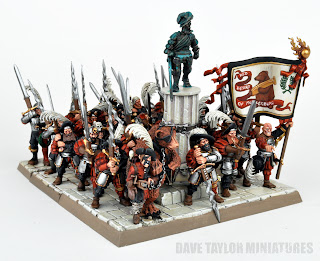 I entered the front three ranks of my Red Bears of Mecklenburg Greatswords unit in the Warhammer Regiment category. After seeing all the entries on the day, I felt I had a pretty decent chance of a trophy with these guys. Halfway through the day they disappeared from the cabinet, and couldn't be found. There were a few different thoughts from my friends at the show, including a possible trophy pick, but just minutes before the presentation ceremony they were spotted in the cabinets - in the Open category. I immediately rushed to check on why and was informed they had been moved because they didn't fit the basing requirements for the Warhammer Regiment category (which requires each model is on its own, individual gaming base - a restriction I find asinine, but that's how it is). In the Open category my Red Bears had absolutely no chance. Result - Finalist. 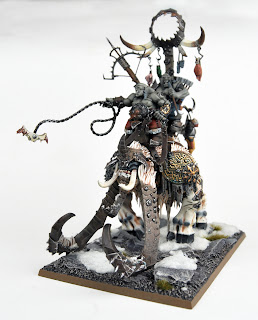 In Warhammer Monster I entered my Ogre Thundertusk. I really love this model and was happy with how I'd painted mine. Before the show I rebased the model on a Dragon Forge resin base and added some new snow, made using the Secret Weapon Miniatures Crushed Glass. It was definitely fun to try out this new (for me) product, and I'm looking forward to using it again. As usual, there were some lovely models in this category. Result - Finalist. 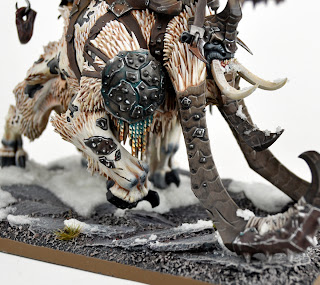 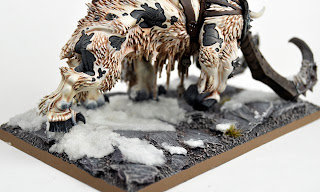 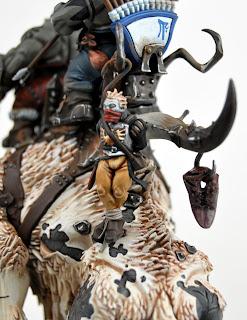 And finally, I entered my Iconoclave piece in the Diorama category. This is the entry I was most hopeful for, but there were lots of great entries in this category too. In the end it didn't quite hold up to the trophy winners. Result - Finalist.

I walked away fairly disappointed, but also full of ideas for next year. Let's see how many of them I can execute.

Congratulations to all the winners. Those trophies are all well deserved, particularly Todd's FIFTH Slayer Sword!

We have a winner! and some Armies On Parade stuff 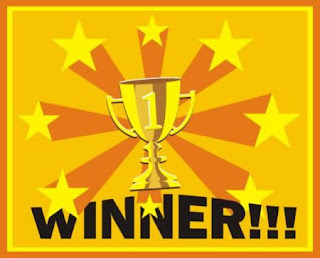 After consulting with Falk over at The Black Crusade 2012 to confirm all donations, I counted up the number of entrants (38) and headed on over to random.org. After punching in the numbers in and hitting enter, it came up with number 25.

Congratulations to Kayle! As the 25th person to enter, he wins the army : ) Please get in touch with me Kayle so we can arrange getting the army to you.

And now, back to your regularly scheduled programming. 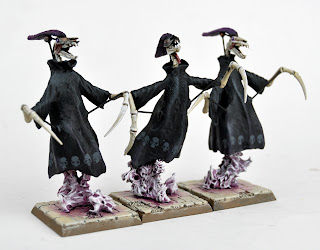 Here's a look at the final models I painted up for my Armies On Parade entry in Chicago. I was thinking that my army was fairly esoteric, and that I really needed to push that even more. Enter the "hobby horses" for the Procession of Morr. Based on the bodies of Ka'Daai Fireborn, and using the heads from Black Knight horses, and arms from Chaos Spawn. The feathers on their heads are from the Empire Greatswords. Oh, and plenty of greenstuff. 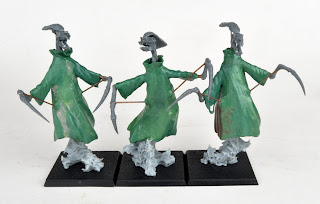 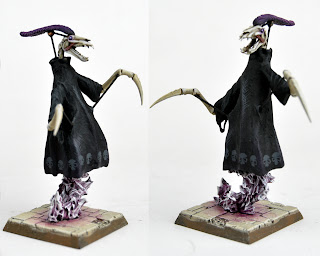 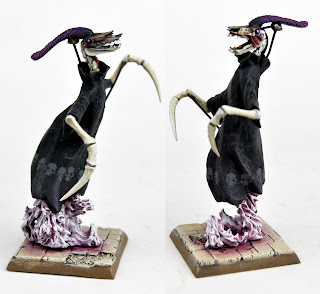 Not only were they interesting to create, they drew a LOT of confused looks and questions at Games Day. The most common question was "What are they in your list?" It was interesting, if people got an answer like "Ogre Ironguts" they were able to start to come to terms with their weirdness. However, if they couldn't fit them into a framework they started looking for other answers, even suggesting the army was a Vampire Counts army and they were Vargheists or something similar.

Interestingly enough, if you step back and look at the army all laid out, it could very easily be translated into a Vampire Counts army... 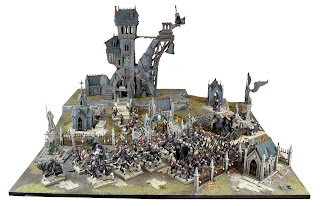 Here's the last shot of the whole thing (without the Wizard Lord and "hobby horses"). Scuttlebutt at the show said that I came in third. It also said that James Wappel's army came in second. You can check out his entry development here.

And, of course, first place went to the amazing surprise entry of J.J. Marino's Dark Eldar. You can see them here. Not only was J.J.'s army a real crowd pleaser, he was a nice guy to boot.

Until next time, keep painting!

Cheers
Dave
Posted by davetaylor at 11:29 AM 15 comments:

Sorry for the delay in getting back to you all, but things have been pretty crazy around here. We are mere days away from sending our 300-page mega-issue of Wargames Illustrated off to the printers, my eldest daughter has started at pre-school, and my youngest has finally cut her first teeth (so no sleep for us)!

Already on my blog roll are the following:

And up for consideration will be the following:

I hope you enjoy checking them all out!