While my lights are galavanting around Illinois in the back of a truck, I'm kind of left to ramble on about my recent hobby thoughts. Hopefully by this time next week I'll have my lights back and I'll snap some photos of my ongoing projects and save you from the tedium that it sure to follow ; )

Over the last few years I've been thinking/plotting about improving my painting skills and making some really solid attempts at competing in a number of different painting competitions. The only hang up is that learning these skills will take a while, and then practicing them will take even longer. Practice, practice, practice. Why is this a problem? Well, it'll cut deeply into my "army painting time".

Army painting is what I do. I love developing a concept, assembling the models, painting them all, and having an army to show for it at the end. I really don't even care if the army ever makes it on to the tabletop. But it's the journey at "does it" for me. The creating.

So here I stand, at a crossroads.

Actually, I think I've moved on a little past the crossroads, down the familiar highway. Perhaps I might take the next exit labeled "Competition Painting", perhaps not.

Well, I'm jumping into the Procession of Morr/Armies on Parade Project with both feet. I've sculpted up some heads, arms, and shields that are currently in the hands of friends who are casting them up for me. I've just built another 10 Flagellants, and have five Knights of Morr ready for primer (as soon as I get a few photos). It'll be a busy two months to get everything done before the June 30 in-store event, but I'm sure I can get it all done.

Additionally, we (the Guns of April crew) had a great time at our game at Adepticon and you can check out the post-game post here. I'm enjoying messing around with Napoleonic army painting so much that I'm starting up two new armies. So, along with the British I'll have three on the go. My current plan is to paint one Russian unit, one French unit, and one British, then back to a Russian unit, a French unit, and a British unit, and so on. With no big game planned anytime soon, I expect I'll be able to leisurely wind my way through all sorts of fun regiments on my journey. Oh, you may have also noticed a massive jump in the number of models purchased (in the little ticker in the right hand column). 228 of those new models are Napoleonic in nature. I have a bunch of Victrix early French that I plan to use for Spanish regiments, and some wonderful Polish models sculpted by Paul Hicks just waiting for some blue paint.

And who knows, I might put together another rambling, photo-free post over the next few days. There are a few topics I haven't rambled about yet. But until then...

Woohoo! - And an Update

Thank you all for your votes on my models, I expect they had a great deal to do with my success in the Historical Single category. A Silver in that category was very exciting, up against competition that I thought was going to blow me out of the water. The Gold in Historical Unit was also welcome, as second place went to a mate of mine who has been coming on in leaps and bounds over the last few years (nice work Rob!)

One letdown was the Gold in Historical Vehicle. Why would a first place be a let down? Because it was the only entry. I'm hoping that next year, particularly with all the great tank kits available, that there'll be a whole bunch of entries. Some competition to help drive an improvement in my painting.

BUT, the biggest letdown of all was being awarded the Silver in Historical Single category at the show, only to find out this morning that I hadn't won it at all. It seems that the wrong slides were put into the presentation and I was actually amongst the trophies. I must admit I agree with the "actual" list of winners and they truly deserve their awards, but it doesn't lessen the disappointment I'm feeling right now.  I know mistakes happen in the rush at the end, I've made one or two myself in the past when running Golden Demon, but perhaps it's the nudge I needed to steer me clear of competitive painting and keep busting out armies. Hmmmm... decisions, decisions.

Head to Cool Mini or Not to check out all the entries and the final winners in each category. Lovely stuff all round.

PS. My minis and lights are going back to the east coast on the Battlefront truck, via next weekend's Chicago wargames show Little Wars, so I won't have too many new photos until wednesday of next week, although I might post a few of the Adepticon action between now and then.
Posted by davetaylor at 6:21 AM 18 comments:

In all the hustle and bustle of getting ready for our Guns Of April game at Adepticon, I completely forgot to remind you all to head on over to the Crystal Brush website and vote for my entries. I've only brought Historical stuff this year, and surprisingly enough it seems that these categories are still completely undersubscribed.

Please show them some love here. There are only three more hours left in the voting!

Oh, and enjoy all the other figures there too!
Posted by davetaylor at 6:23 AM 2 comments: 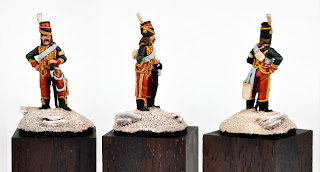 Ok, so work continues on lots of different things for Adepticon next weekend. I've just posted a couple of photos of completed ox-drawn water cart objectives over on the Guns of April blog, go check them out ; )

Above you can see the work in progress photos of my 7th Hussar. Things are trucking along nicely, but last night I hit a bit of a snag. 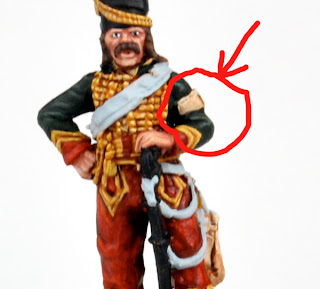 On his left arm he has this little band. It is neat, and doesn't really look like a bandage, but it also doesn't look too much like a black band of mourning (or something like that). I'm guessing it might be an identification band, marking him out as a member of a particular troop or squadron.

Do any of the Napoleonic buffs that check out my blog a) know what it is and b) what color it should be?

Cheers
Dave
Posted by davetaylor at 7:52 AM 7 comments:

The 7th Hussars in Egypt 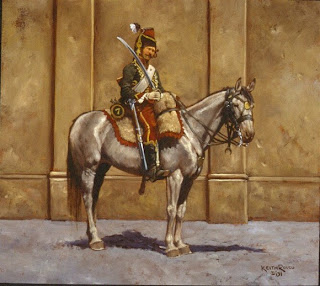 With Adepticon rapidly approaching, I'm pleased to say that it seems we'll reach almost all of our goals for our Guns of April project. Lots of last minute painting (most of it seeming to be the cavalry components), and a little bit of fun modeling and objective building, and we'll be there. Expect to see a lot of posts on the GOA blog over the next two weeks. 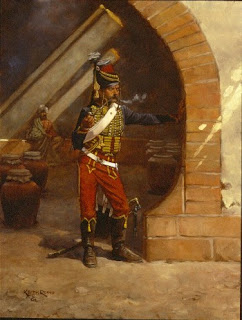 Anyway, with that wrapping up, it seems I might have time to try to get an entry sorted for the Crystal Brush. Inspired by several paintings by Keith Rocco of a trooper of the French 7th Hussars in Egypt in 1798-99 (two of which you can see above) I've started on the model and have most of the conversion work done now. I've take a Perry Miniatures Hussar officer (from one of their 1815 command packs) and swapped his head for one from the plastic Hussars boxed set. A little putty work to give him the early Hussar boots, extend the flamme (I think that's what it's called), ensure his cap cord was attached to the mirliton headwear, and give him the late 18th Century hairdo was all that was required. 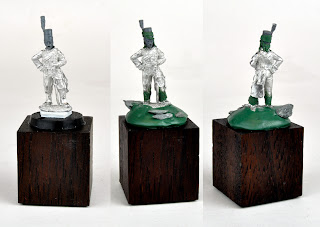 Next up is adding the final basing material and priming before I get stuck into the fun painting!

The Knights who say MORR! 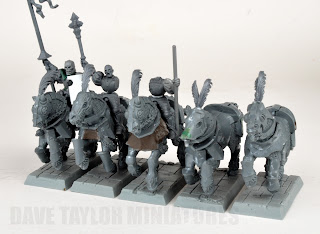 Just a quick one today. Last (k)night I took a break from painting the next five flagellants and decided to start in on the Knights Of Morr. I now have four more steeds converted, and the beginnings of a First Knight and Standard Bearer. I'm looking forward to laying down some grim and grimy metallics on the barding for the horses and contrasting it nicely with the purple for the feather plumes. 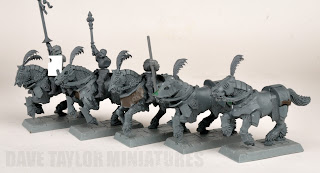 The bases are from the Dragon Forge Designs Temple range, found here.