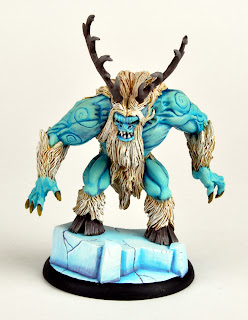 Sitting here in my basement, I can feel a slight chill seeping in under the door. Although we didn't get the projected 1-3" of snow, it did snow for quite sometime. Just perfect weather for painting up these Malifaux models for my friend Thomas.

You'll have heard me mention Thomas before, whenever some laser-cutting needed to be done. He is the guy who reverse-engineered my Imperial truck design and turned it into the files you can find here. He has also helped me with loads of other stuff over the last four years. So, I finally thought I should start paying him back. To that end I'm painting up his Malifaux warband for the tourney at Adepticon. Here you can see the first nine models complete, only six more to go.

The bases are from Dragon Forge Designs, the Ice Kingdoms round-lipped bases. 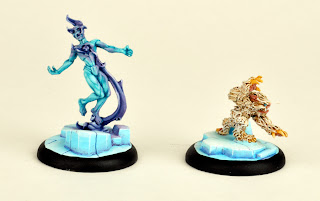 Essence of Power and Wendigo 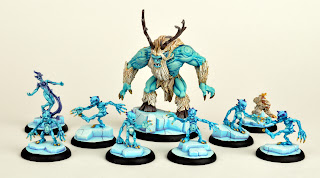 The Warband so far

I'll try to squeeze in another post before the new year, but as hectic as the last few weeks have been, I wouldn't count on it ; )  If not, I wish you all a safe celebration, and I'll see you on the other side!

Cheers
Dave
Posted by davetaylor at 11:47 AM 36 comments:

Email ThisBlogThis!Share to TwitterShare to FacebookShare to Pinterest
Labels: Malifaux

A time for Tradition

I hope you'll indulge me a little, in this post with no toy soldiers.

The end of the calendar year is laden with tradition. Some folks celebrate various holidays, while others choose not to, but regardless of how you do it, you probably have a few things you always do, because you've always done them.

My family celebrates Christmas (despite not being religious at all), and one of the things my Dad has always done is cook a Christmas pudding (or six). I remember one of dad's old friends coming over each year, and the two of them would spend a bit of time in the kitchen, then head down to the garage to boil the Christmas puddings in an old "copper". That would take time, so they'd amuse themselves with a few beers and a lot a chatting about all sorts of things.

In the end, we'd have a lot of traditional Christmas puddings. One would be consumed on Christmas Eve at the aforementioned friend's place (with his family), and another one or two at Christmas lunch with my Mum's whole family (when there was only one for lunch it was a real race to get a piece as they'd disappear in a flash).

Well, I've celebrated the last 10 Christmases in the US, 12,000 miles from my old family traditions. Well, almost all of them. Mum and Dad would send me a Christmas pudding each year. Sometimes after three weeks in the care of two countries postal systems I'd need to cut a bit of mould off the pudding before we could tuck in, but they were always great. I'd take it along to the Christmas Eve dinner with my wife's family, and share it around (although there has often been a distinct lack of good custard). 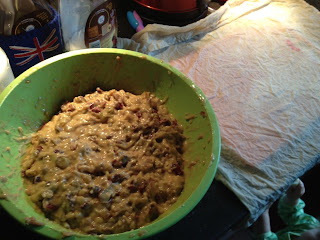 This year I thought I'd save my parents $50+ in postage (those puddings can weigh a tonne), and I decided to make my first Christmas pudding. The somewhat disgusting looking stuff in the bowl above is the batter. The ancient recipe my Mum sent through called for raisins, sultanas, and currants. Here in the US, all of these things are referred to as raisins (of some description) so I had to make a few compromises. In addition to loads of dried fruit (which is soaked for 24-hours in rum, for those interested) the ingredients list is nice and simple: flour, butter, eggs, bicarb soda, and some lemon peel. 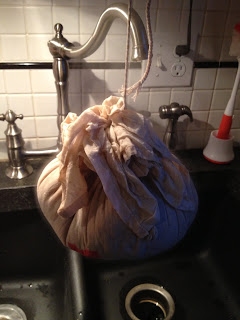 After mixing the ingredients and pouring them into the center of the pudding cloth, it was all boiled for 4 hours. This shot is of the pudding once it has been removed from the pot and left to firm up completely. It hung like this overnight. I remember some years when there would be up to eight of these hanging from the ceiling of the garage for a week or more. 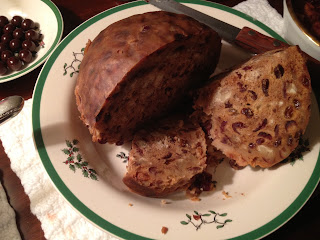 When it came time to cut it open on Christmas Eve dinner (actually held a few days early this year), I found that a few of my adjustments had worked, others needed a tweak, but it was well received by my wife's family.

Sometimes traditions are not good, sometimes they do more harm. We should seek to remove them from our lives, particularly if they hold us back or prevent growth.

But those traditions that are, at their core, about love and family and growth, should be cherished and evolved and spread. One of my cousins back in Australia also decided to try her hand this year (and apparently she was a little more successful than I was) so for the first time in more than 40 years, Dad could relax a bit during December, without the worry of shipping deadlines, or working out how many orbs of delicious pudding the clan would devour on Christmas Day.

The torch has been passed... although I have a sneaking suspicion he'll make one anyway, just for those late night snacks ; )

To all I wish you a happy and healthy end of year period, with plenty of "family", either the one you were born into or the ones you've met along the way!

A Civil War - Guns of April-style

I just wanted to take a few minutes to point out the project that a group of friends (The Guns of April) and I are working on for Adepticon 2013. For 2012 we built armies and a table to play out a "what if?" scenario from the Battle of Salamanca (1812) in it's 200th Anniversary year. You can see shots from that game here.

Following the fight, we stood around and pitched a couple of ideas for 2013 and we settled on a "what if?" scenario for the first day of the Battle of Gettysburg, in the year of its 150th Anniversary.

Well, each of us has been plugging away on our troops, be they Union or Confederate, and there are now quite a few posts up on the Guns of April blog. I urge you to head on over there and see what the team has been completing recently. 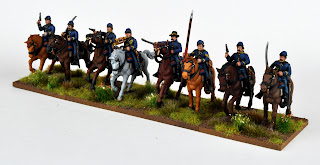 A stand of the 2nd Wisconsin. We are using five stands per infantry regiment for a total of 30 figures.
The jackets have been extended to create frock coats and the hats have been built up to create Hardee hats.

The wonderful banners are available from GMB Designs.

Cheers
Dave
Posted by davetaylor at 10:43 AM 17 comments:

I promised you some more yellow, so here it is. While I've been messing around with other projects too, I've also been slowly building up the paint on the Furioso Dreadnought for my Lamenters. As you can see from the shots above and below, I've had some fun messing around with tonal gradations much more extreme than I would have even two years ago. Obviously there's still a lot of work to be done, but it's nice to see some progress. 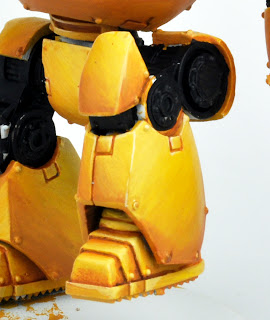 And I'd also like to draw your attention to an interview I did with Tyler Mengel as part of a series of interviews he is doing with folks he admires in the hobby. I'm very honored to find myself amongst a crowd that includes guys like Chris Borer and Mathieu Fontaine. If you've ever wanted to ask me a general hobby question, you might find the answer on Tyler's site. And while you're there, please take the time to check out all the cool hobby work he has done. 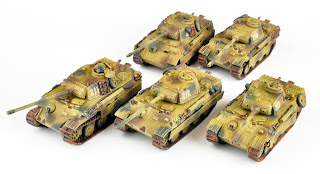 Just recently I completed a quick(ish) commission for some Late War Germans. The client was very keen on the color scheme and we had a good chat beforehand about the approaches we wanted to take.

The rest of the detailing was pretty straightforward, and I used Vallejo Hull Red to pick out the areas where the Panther's zimmerit had chipped off (above). 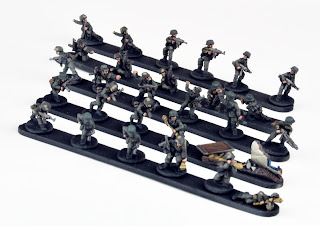 I painted the infantry in much the same way as the Early War Germans I painted last year. However, quite a few of these troopers had camouflage smocks and helmet covers on. I basecoated these in German Camo Medium Brown, the green was Reflective Green, and the bone color was German Camo Beige. 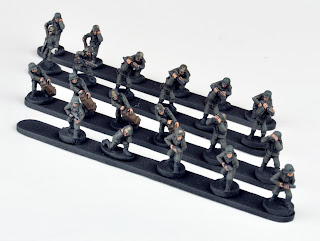 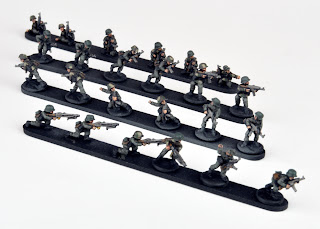 The infantry models are all still photographed on their painting sticks as the client is going to do the basing. 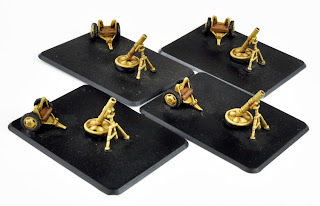 The heavy mortars above were easier to paint once assembled on their artillery bases. Instead of using Middlestone for these, I basecoated them with German Camo Ochre.

The 18 halftracks were painted in much the same way as the Panthers at the start of the post. The only difference amongst this group were the 6 transports in the last photo. They were painted with larger areas of camouflage, with the intention of creating a roughly equal balance between the gold, brown, and green.

I hope you like these models. Hopefully I'll be able to put together a but of a tutorial on different ways to do the camo patches on German armor.

Email ThisBlogThis!Share to TwitterShare to FacebookShare to Pinterest
Labels: Flames Of War
Newer Posts Older Posts Home
Subscribe to: Posts (Atom)
Check out all these links!