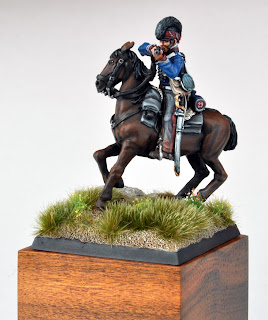 Just a quick post to put up my Single Model (Historical) entry for the NOVA Open painting competition tomorrow. When I decided to head down to the show, I cast around for a well-painted single model in my collection. As I soon realized, all of my historical stuff (the well-painted bits anyway) are multi-based, from the regiments to the artillery to the command. So I pulled out this guy. I've had him sitting on my table for over a year (closer to two) and I figured it was time to get him painted up. 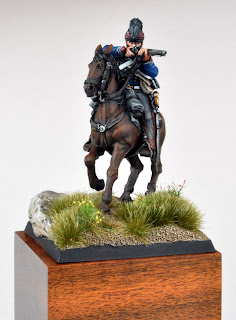 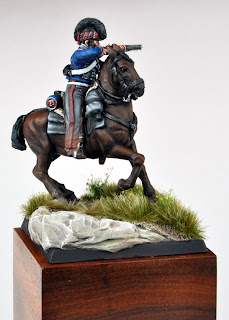 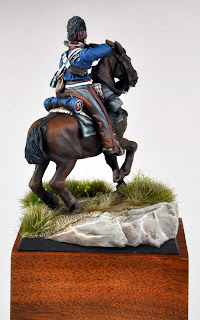 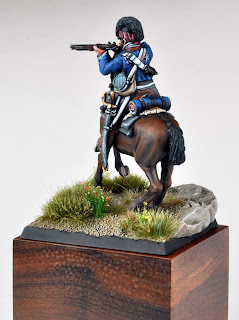 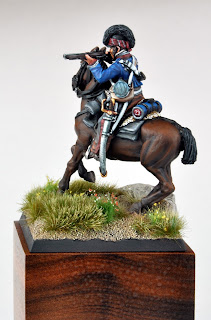 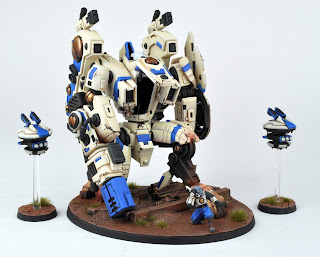 I've posted a couple of images of the Riptide in progress, but here are a whole bunch of the finished piece. Of course, thanks to the overhead positioning of the front hatch, the interior doesn't really show up in any of the photos. Not to worry. My client likes it a lot, so that's always the best part of finishing a commission.

I hope you enjoy the photos too. 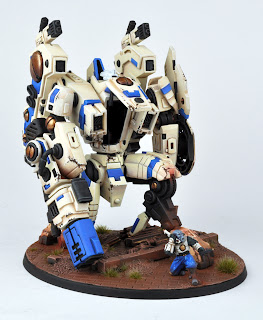 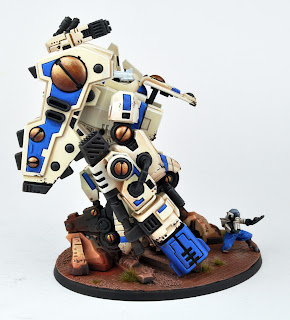 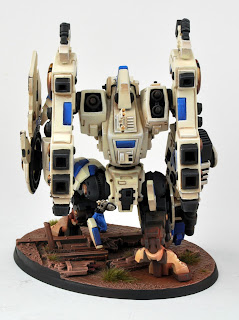 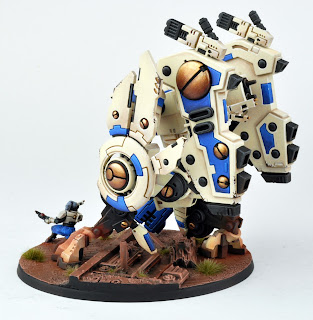 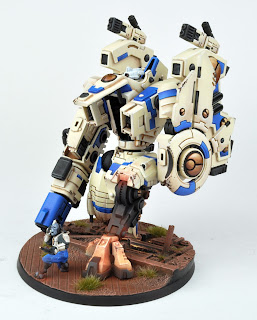 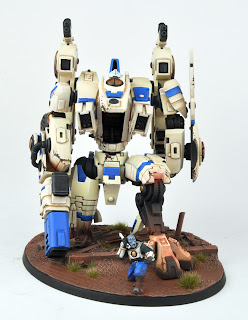 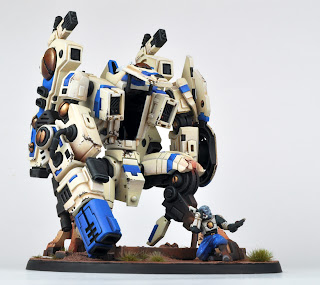 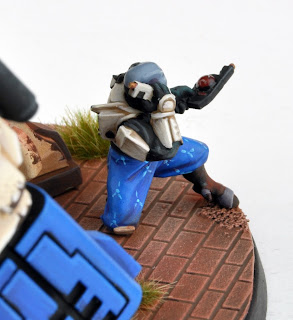 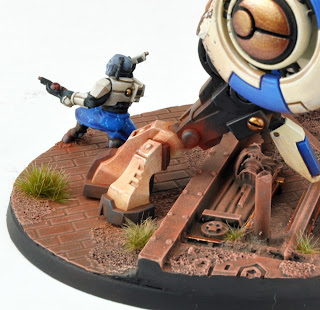 I'll be taking this along to the Crystal Palette at the NOVA Open this weekend, hopefully he'll do well there before I ship him off.

Speaking of the NOVA Open, you still have a chance to get in and buy a few more raffle tickets to win the great Redemption of the Fallen army (containing a Ravenwing squad painted by me).

Here's a link to photos of the whole army.

Here's a link to the page where you can buy your tickets!

Additionally, Incursion is reaching its final days on Kickstarter. Head on over, check out the gameplay video, and think about pledging to this excellent rerelease.

Cheers
Dave
Posted by davetaylor at 5:59 AM 32 comments:

Redemption Of The Fallen

Things have been quite busy for a while now, and the busier my real life (and hobby life) gets, the fewer posts seem to make it onto the blog. Well, after being busy prepping for Historicon, prepping for Games Day, prepping for WI312, prepping for my annual "week at the beach", and actually going on my vacation, I can say I'm ready to get back into the swing of things.

Of course, if you need to see more great photos of the army you can check out these professional shots. I'm very pleased to have been able to help out with this event in a last minute capacity. Hopefully next year I can plan in some more time *crosses fingers*

Thanks to everyone who took the time to comment on my last, super-self-indulgent, whiney post. It was good to get the disappointment off my chest, and be able to state (somewhere in the comments) that I'm not angry at the AOP competition, or GW, or the folks at Games Day, or the other winners. I had simply built my hopes up way too high. My thanks also go to those folks who made some good suggestions regarding the "dynamic" between my display and my army, very helpful.

I haven't been slacking. I've got a few more posts that are ready to be typed up, as soon as I get the time ; )

Here are a few teasers.

Cheers
Dave
Posted by davetaylor at 11:34 AM 7 comments:

Armies On Parade - a look back 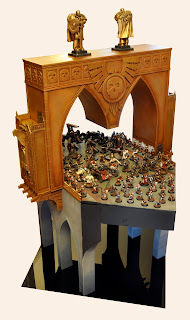 A few of you have noticed that despite all the excited build-up before Games Day, I haven't mentioned how things went for my Mechanicum army and its massive display board (seen above).

I've been mulling over the many possible ways to describe the disappointment I felt on the day when my army failed to place, but haven't really been able to put it into words properly. If I was to give you a full rundown of the conversations I had on the day, it might sound like sour grapes.

One thing I will say is that at the show, I did point out three armies that I thought would score well with the general public, and pointed out the particular reasons for their popularity. Surprise, surprise, those three armies took the trophies. At least I can pick a winner ; )

With all the work that went into this year's army, and the over the top display board, and the money involved in shipping it around the country, etc etc etc, I'm going to take a break from the AOP competition for a while. I can certainly then concentrate on the quality of my painting and see if I can succeed again at the Golden Demons (which improve in quality every year). 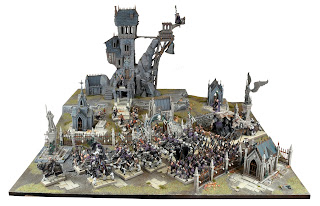 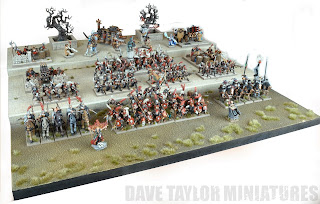 Cheers
Dave
Posted by davetaylor at 5:08 AM 47 comments:

Email ThisBlogThis!Share to TwitterShare to FacebookShare to Pinterest
Labels: Armies on Parade

Three years ago, I was involved in the very cool Storm Wardens Charity Army build. We raised around $16,000 for Doctors Without Borders.

Two years ago, I was involved in the even cooler Heroes Of Armageddon Charity Army Builds. We raised around $34,000 for Doctors Without Borders/

Last year, I took a break.

This year, I was going to take another break, but when I heard that one of the team members had suffered because of a fire, I offered to lighten his load. Turns out he preferred to keep on painting (to help keep his spirits up), but another one of the painters broke his arm. There was still a place for me on the team.

This cool, annual event was initially started by Mike and John from the Santa Cruz Warhammer blog. They ran the first two events very skillfully, but suffered some burnout in year two (co-ordinating four armies and over 20 volunteer painters can be madness). In 2012, Falk, from Tabletop Fix took over the reigns and guided a team through a successful project.

This year, Tim Williamson (of the Tau of War blog) has joined forces with the NOVA Open team to make another Charity Army Build a reality. This is a pretty tight one, just six painters on the original team, but all of them very accomplished.

Click on the link here to see more photos of the army, and buy a few more tickets. The money goes to one of the best causes you can find around the world - Doctors Without Borders.

Here is my completed contribution to the Redemption Of The Fallen army, a squad of six Ravenwing bikers (kitted out with a power fist and two meltaguns, great tank hunters). 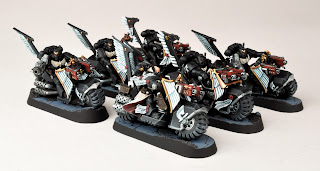 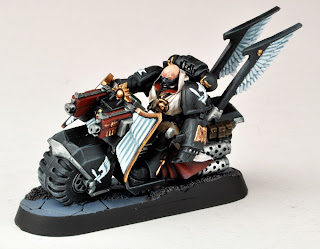 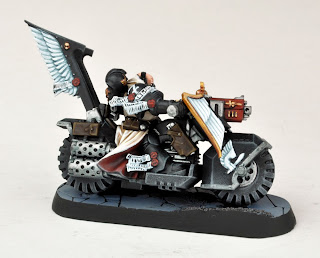 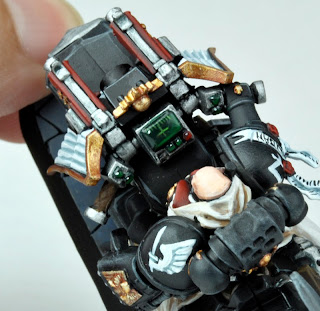 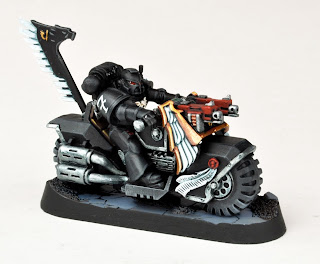 I chose the "7" for their shoulder pads as I'm the "ringer", the lucky seventh painter on the project : )

The bases were donated by Justin from Secret Weapon Miniatures. I'm looking forward to catching up with Justin at the NOVA Open this year, and maybe buying him a Manhattan or two.

Cheers
Dave
Posted by davetaylor at 11:49 AM 4 comments:

No, I'm not addicted. I can stop anytime I like. 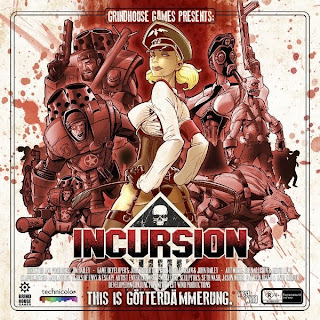 A quick promo for two Kickstarter projects that friends of mine are involved in.

The first is Incursion (from Grindhouse Games). I'm really keen to see how far this can go, and if it'll lead to Jim and John tackling more theaters in their Weird War Two "dungeon crawl" (I guess). The artwork and personality for the game is right up my alley, and you can read all about painting up the original Incursion models for charity here. 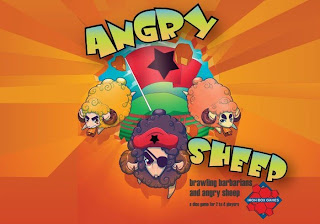 The second one is Angry Sheep (from Iron Box Games - a "division" of Secret Weapon Miniatures). Justin McCoy has put together a very cool little beer and pretzels game (or maybe just the beer OR the pretzels), but with a delivery date of December 2014 on a very simple product, I'm thinking this'll make a great Christmas gift (so, I'll be pledging at the $45 level and grabbing two).

So, check out these two projects. I hope you like the ideas behind them as much as I do.

They also have kick-ass videos!

Cheers
Dave
Posted by davetaylor at 11:42 AM No comments: