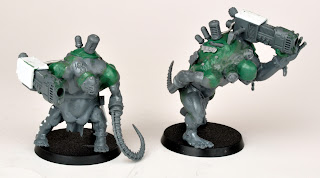 Sometimes you see a couple of models that just speak to you, and sometimes they beg to be converted. That was the case with the new Warriors Of Chaos Warshrine, or more specifically the two beasts that lug it around. Combine this with having just finished reading Graham McNeill's Priests of Mars and there was no stopping me. Using a variety of bits from other kits I've turned the shrine bearers into vat-grown, slab-muscled plasma cannon-toting servitors for my Adeptus Mechanicus army. 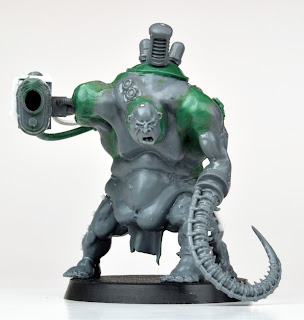 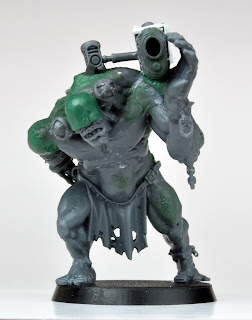 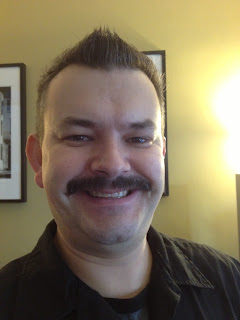 Cheers
Dave
Posted by davetaylor at 5:00 AM 17 comments: 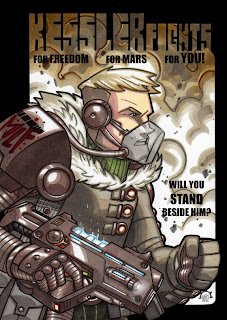 There are just under 24 hours to go in the Kickstarter campaign for the space-rock-opera comic written by my friend (and occasional nemesis), Dave Pauwels.

If you like your sc-fi loaded with musical nods and homages to the great sci-fi movies of the 1980s, then you really should have been reading Free Mars for the last two years. Written by Dave and drawn by Nicolas Giacondino (perhaps better known as Anerion the Faithful for all his excellent 40K inspired pieces), Free Mars is a lot of fun. I highly recommend you visit their website here.

Once you've familiarized yourself with the gritty dystopian future of life on the Red Planet, head on over and pledge a few bucks to their already-funded Kickstarter. I recommend the $25 level if you are just interested in the comic, or the $45 level if you like your comic characters in miniature form. Myself? I pledged at the $150 level in order to score an original piece of art for the wall of my mancave. 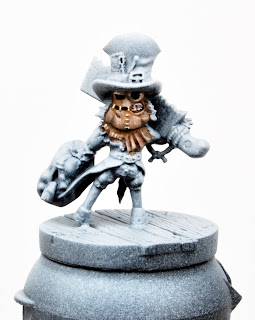 To break up the vast amounts of yellow (Lamenters) and blue (ACW Union troops) I've been painting recently, I started on this little guy. Should be a fun deviation ; )

Cheers
Dave
Posted by davetaylor at 9:20 AM 3 comments:

Here he is, Death Company Captain Janus (my version of DC Tycho, thanks to Brien for the name). Constructed primarily from Sanguiary Guard bitz, he also sports a combi-melta that was cobbled together from other models. His paint scheme matches the other Death Company models in the army, with the addition of a little more gold. I hope you like him. you can see him pre-paint here. 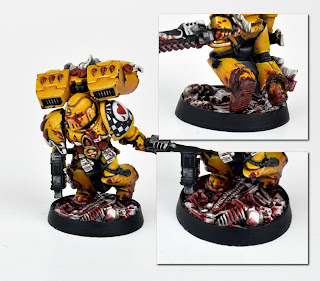 And here is my first attempt at the gory basing. I wanted the blood to be a little translucent and splattered in just the right places. Let me know what you think.

Now, on to the other things...

My buddy Alex has just re-opened his Battleroad Games & Hobbies website! You can get there via this link: http://battleroadhobbies.com/ and he has a Black Friday deal running until the end of business tomorrow (November 25th). The discount code is BRGLaunch 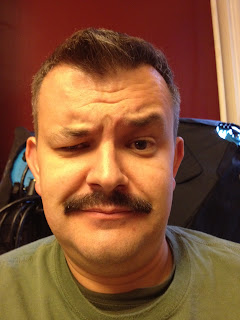 And my moustache continues to grow. I decided yesterday that I would match all donations taken between Nov 23-30 dollar-for-dollar. I've had $30 kicked in since then, so I'm asking you all again to consider donating. Now is certainly the best time as I'll basically be doubling your money : )

You can get to my MoSpace here.

Cheers
Dave
Posted by davetaylor at 11:36 AM 12 comments:

Here we go with all ten Tactical Marines painted and standing on their new bases. I just need to add their blood and gore splatters on the base, their greaves, and on the occasional combat weapon. 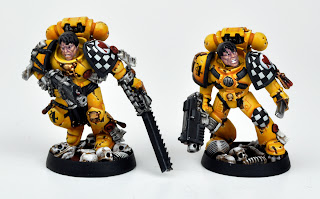 Here are the last two Marines to get the treatment. The guy on the right was, of course, the model  used for the yellow tutorial from a couple of posts back. 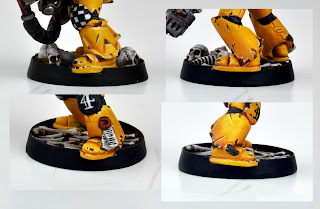 And finally, some of the feet kind of hung over the edges of the bases. As I wanted the models to be standing in the blood and gore, I needed them to be standing lower inside the Secret Weapon Miniatures Bone Fields bases. To achieve this it was a fairly simple matter to slice out small slivers of the sides of the bases, as you can see in the photo above.

Next step, adding gallons of gore! 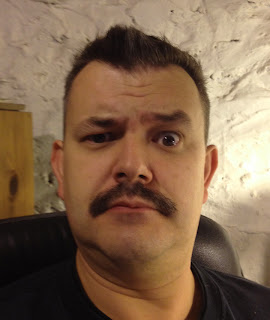 So, here we are just over halfway through Movember. My 'stache is coming along nicely, filling in everyday and becoming more luxurious. It has earned hundreds of amusing (and smart-ass) comments from friends and family, but not enough donations yet. I'm more than happy to take grief from those that have donated ; )

Please visit the Movember & Sons website here to learn more about the cause.

Then visit my MoSpace and donate away!

I've had a lot of folks asking questions about the way I've done the yellow armor on my Lamenters. Well, here's my rough run-down. Unfortunately the transitions aren't incredibly obvious the photos below (or perhaps that's a good thing) but I hope it helps.

Note: My thanks to Brice Cocanour, Damon Drescher, and Caleb Wisseuback, who have all done some lovely yellows before and let me in on a few of their secrets.

1. After priming the model in white, I basecoat it with GW's Averland Sunset. I like this color, but sometimes it'll go on a little unevenly, take your time with it. For my Assault Marines, Dreadnought, and Storm Raven I'm planning on putting this layer down with an airbrush.

2. To ensure an even, solid coverage, I highlight the model with a mix of GW Averland Sunset and VGC Sun Yellow.

3. The next highlighting stage is with VGC Sun Yellow.

4. The final highlighting stage is a mix of VGC Sun Yellow and VMC Pale Sand (I love Pale Sand, a fantastic color that gets used all the time).

After all the highlighting is complete, it's on to the shading. This is where I was in unfamiliar territory as the vast bulk of my painting has always been working up from the shade to the highlight, but it was certainly fun learning how to work this way.

5. I began shading with a mix of GW Averland Sunset and GW Skrag Brown, adding more Skrag Brown as I went along. This stage is actually about three or four passes, adding more depth each time.

6. This stage is for adding the final depth shade, a thinned wash or two of VGC Charred Brown. I paid particular attention to the corners of the shoulder pad and the rear of the greaves.

7. And the next step is to tidy up everything with some VGC Black.

Well, I hope that sheds a bit of light on how I've been painting these guys. I'm pretty happy so far with the progress I've made. The real test will be the Storm Raven with its large, flat panels.

Cheers
Dave
Posted by davetaylor at 4:00 AM 35 comments:

Lamenters Update, and getting Lost

Sorry for the significant delays in getting posts up in recent weeks, but things have been pretty hectic. A two-week visit from my mother, Superstorm Sandy, and my coverage of Fall In have all conspired to impact my hobby and blogging time. I've still been plugging away at a few things, so here's an update on the boys in yellow - my Lamenters. 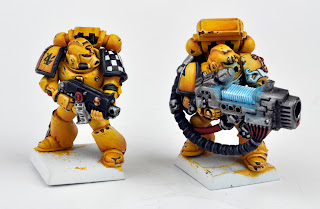 Here are a couple of finished models, including the plasma-cannon toting Marine. 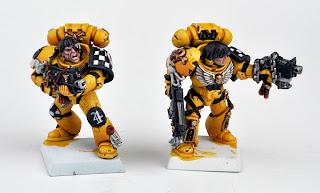 And then the next two I finished up this evening. 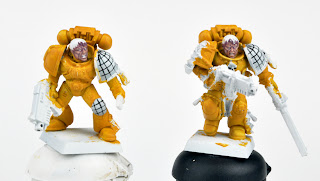 Here are the final two models for the Tactical squad, still lots to do on them, but I'm feeling very close to reaching the final squad, the Assault Marines.

In my next Lamenters post I'll try to give everyone a detailed look at how I've been painting these bright yellow grimdark Marines. 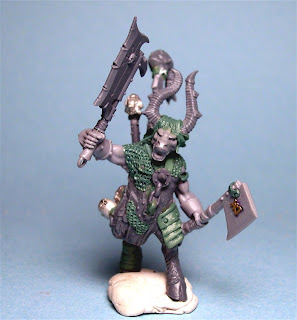 And now for some thing completely different...

My friend James Craig from the Lost In The Warp blog has recently kicked off a multi-blog series of collaborative posts with mutual friends of ours, Mike Butcher and Shawn Welte. These posts are based around Mike and Shawn's converting skills and James painting ability (and James' very cool Beastman army).