Here's the new Battery of Royal Horse Artillery. After finishing work on the "Artillery Through the Ages" issue of Wargames Illustrated (out in late Feb), in which one of the articles covered Napoleonic Horse Artillery, I felt it was only right I get my battery painted up. With much less red and white to paint than the standard foot regiment, these guys painted up wonderfully quickly. I was just putting the finishing touches on the officer (pictured above with drawn sabre on the Howitzer base), and I thought I'd check out a wonderful piece of art from Karl Kopinski. 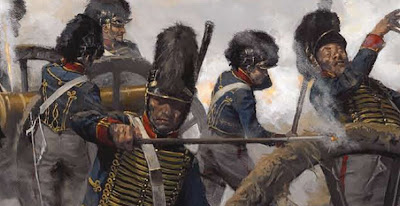 What you see here is a very small part of a wonderful painting by Mr Kopinski (formerly of GW fame) called No Retreat. He painted this picture as part of a pair for the Waterloo Collection. These paintings are a major part of the fundraising for Project Hougoumont. If you are interested in cool art and preserving history, please check out the links.
Anyway, back to the matter at hand. Just as I thought I was done, I noticed - tucked away in the background - two gunners with their back to the artist. There was some fairly elaborate brocade (I think, although it might be called lace) work on their uniforms, work that was obviously a bit too elaborate to be sculpted on the 28mm Front Rank figures I was painting. 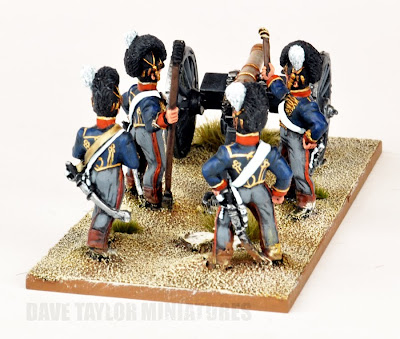 I just couldn't let it slide, so I free-handed the brocade/lace onto their rather smart jackets, highlighted and left it at that. You can see it above on the backs of a couple of the gun crew, but it does appear on all the figures in the battery (except the officer, who's back is covered by his over jacket).
Next time: More of my recent British paintjobs, plus a look at the expansion of the Armies on Parade competition at Games Days.
Cheers
Dave
Posted by davetaylor at 12:20 PM