Armies on Parade, and the Portuguese 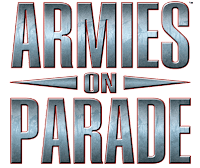 Armies on Parade logo from GW website, used without permission.
Last Thursday GW posted details of its Armies On Parade competition to be held at Games Days around the world this year. On some internet forums this announcement was met with jeers of derision and mountains of scorn. "How dare GW run a competition that forces you to paint a new army!?! What a shallow and useless marketing ploy to prop up flagging sales!"
It was all I could manage to read he first dozen or so comments, almost all from "hobbyists" who had not read the entire posting themselves before bringing out the long knives to eviscerate what is actually a simple and wonderful idea. So, turning away from the vitriol, I started to think about what I liked so much about this "new event".
Two years ago, my friend (and former colleague) John Shaffer told me about a simple idea of his to add a new event to Games Day. An event that required few staff, and a little prep work, but would create quite the spectacle. Amusingly dubbed "Armies on Parade", I thought it'd be fun to support John's idea and put one of my own on display at the 2009 show in Baltimore. My Bretonnians hadn't seen the light of day since Adepticon '08 (where they didn't make it onto the table thanks to a debilitating illness that struck at the show) so they were due for a glimpse of the sun, or at least big-ass halogen lights. It was fun to see the two dozen or so armies arrayed and to hear some nice things said about my humble Brets.
At Baltimore Games Day 2010, the Armies on Parade event was made slightly more official. In addition to the public votes, the team from the Studio were also on hand to select their favorite. I decided to take my Blood Pact (they were my latest army after all). Dan Abnett was at the show, and I'm such a fanboy when it comes to Dan, so it made sense. Fortunately, others (including Dan) liked my army and I won the "Best Painted Army" certificate. There were about three other certificates to be won, with all of them appearing to be quite similar.
Alan Merrett was at the show, overseeing the running of the Golden Demon awards, and must have seen the response that John's little idea had. Now, in a sensible move by the "powers that be", are taking the competition global (well, semi-global anyway). A competition that promotes the clever presentation of well-painted (and possibly converted but certainly good looking) armies by a company that makes its money from selling toy soldiers? Sounds like the right thing to do to me. 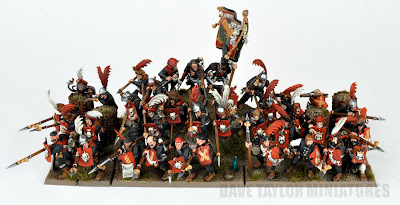 With activity in our "8th Edition Army Challenge" somewhat stalled by "shiny object syndrome" and other things like real life, I've decided I'm going to enter the 2011 competition with my Artillery Train of Nuln. It is my hope that I can paint up about half a dozen more units to the same quality as Grundel's Defenders (above, winner of a Silver Demon) in time to enter at one of the remaining GW stores in my area. I'm hoping to win at the local level which will give me an automatic entry into Games Day, and the Armies on Parade competition at Games Day 2011 (in Chicago this year). Should I not win at the local level, there's always the "Second Chance" comp at the show, where your army might be good enough on the day to get bumped up to the final competition (or so the rules describe).
So, get ready for more Empire goodness over the coming months. I figure 120 or so models and a wicked display board should get me where I need to be.

And as I said time around, here are a few more of my Napoleonic figures. This time they're Portuguese Caçadores from the 2nd Battalion. The Caçadores (literally "light infantry") were Portuguese troops trained by the British to act as light infantry, which at the time meant they were really the elite. Not only could they perform all the tasks and battlefield roles of the line infantry companies, but they were trained to skirmish, scout, and other tasks that made for formidable units in the war in Spain against the French. 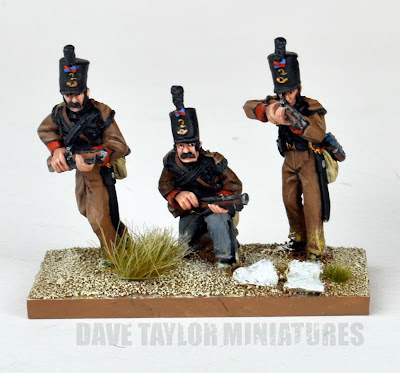 This base has three Caçador riflemen, equipped in much the same way as the troopers of the 60th or 95th British regiments (most notably with Baker rifles). 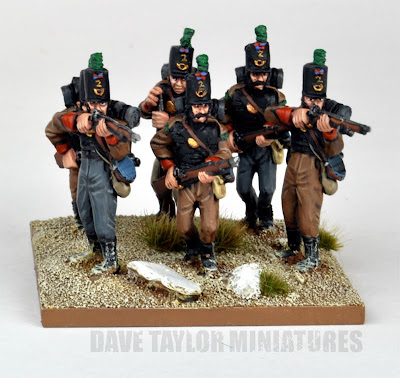 This base contains six musket-armed Caçadores. Some points to note about these guys:
• They wear the green plumes associated with British light infantry companies.
• They have the red cuffs of the 2nd Battalion.
• I've shaved off they little "6" found on their shako (on the Victrix models) and repainted a "2" for the 2nd Battalion.
WARNING - Shameless Plug Approaching!
If you want to know a bit more about the Portuguese Caçadores, then pick up a copy of Wargames Illustrated #277 and read the cool "Great Warriors" article in there.
Cheers
Dave
Posted by davetaylor at 5:54 PM