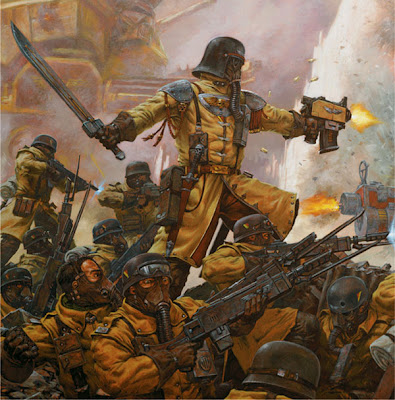 Artwork by Adrian Smith, copyright Games Workshop, used without permission.
Finally, a winner for my Steel Legion Army List competition has been determined!
I've been quiet all week because I've had no time to take photos of the models I've been painting (more Napoleonics, I've really been bitten by the bug). On Saturday I took a run up to Showcase Comics to attend Dakkacon: Philadelphia, along with Jeff from The Adept's Forge. The event was quite different to what we expected, but it was a good day over all. Jeff helped me narrow down the lists until we hit on the final two or three.
On Sunday, my wife came down with an awful stomach flu and so I looked after our daughter all day, keeping her entertained. By the end of the weekend I was too wiped to even paint! On Tuesday, I was hit by the flu and was completely out of it. I had trouble even stringing a sentence together it was that bad. Fortunately, for us both, it just seemed to be a 24 hour thing as we were both able to go to work the following day.
Anyway, enough of my moaning and rambling.
Thank you to all 25 gamers who sent in army lists for the competition. There was a fairly broad spectrum of lists, from the current "leaf-blower" tourney favorite to the super characterful. I must admit it was quite tough as a number of the better options available to the Imperial Guard now were simply not written into the Steel Legion background 10 years ago. Does that mean that the Steel Legion wouldn't have used Psyker Battle Squads or Vendettas had they been invented? Who's to know?
Well, in the end Jeff and I came down to lists by Ted Nagel, Warhammer 39,999 (Rob), and Stuart Heasman. All were characterful, included some solid arrangements, and met our criteria.
In the end I decided on Stuart's list. As well as having the look and feel of a Steel Legion list, Stuart also included a couple of units from the other famous Armageddon regiments like the Savlar Chemdogs and Armageddon Ork-Hunters.
Here's Stuart's 3,000 point (roughly) list:

• Vendetta Gunship (for the Armageddon Ork-Hunters)

And of course, I'd have to pick one of the entries all the way from Norway. Not to matter, Stuart's brand new Leman Russ Demolisher kit will be on it's way to him as soon as the snow clears here in Maryland.

Posted by davetaylor at 5:55 PM