The Artillery Train of Nuln (Part 6) 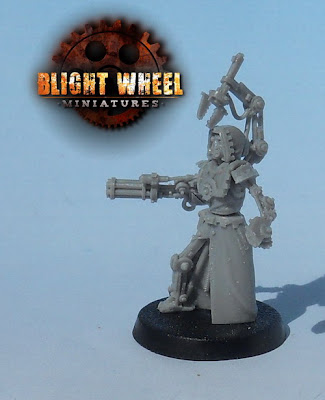 Before I jump into this post about my ongoing Artillery Train project, I want to share with you a revelation that I had last night while watching a classic sci-fi movie, Dune. The David Lynch movie of 1983 was one of the first I was able to see on the big screen, and a lot of it has stuck with me over the years. Seeing it again last night was very cool, and one line in particular struck a chard with me (in regards to my blogging). Now, to paraphrase Gurney Haleck poorly, "Not in the mood? Mood? Mood is a thing for cattle and blogging"
What do I mean by this? Well last week I was pretty psyched to get a few blog posts up, show you folks what I'd been working on, and so forth. There was a post on Monday, another on Tuesday, and a third on Wednesday. I was about to bang out another post for Thursday when I noticed my Wednesday post had disappeared, along with a few comments. WTF? As many of you know, Blogger had some kind of issue last week that could only be solved by pulling 30 hours worth of posts and comments. I'm not sure what that issue was, or even if I'd understand it if I was told. All I know is that it took the wind out of my sails, left me "not in the mood". So you've had to wait until now to see what I've been up to.
Let's kick off by pointing out the very cool model above, part of the new range of models brought to the world by Laurent of Blight Wheel Miniatures. I've mentioned Blight Wheel before. They are the ones who produced the cool vehicles I showed you in this post. Take a look at their site, and make sure you let Laurent know what you think of his range. 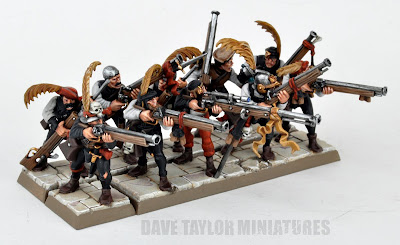 And now, on to the Artillery Train of Nuln. Here you can see the first of my new Handgunner units completed. I have another of this style primed and ready for paint. Then it's on to the two units of Nuln Ironsides. The models are very nice, crisp, characterful sculpts, and I'm looking forward to getting some paint on them soon. 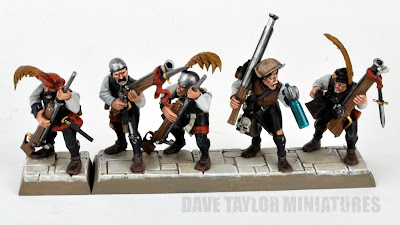 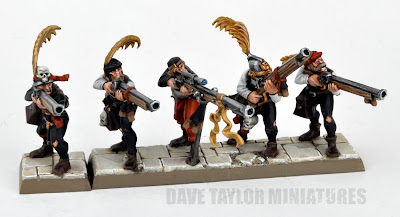 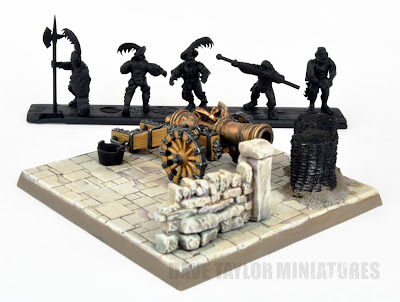 Above you can see the progression on my first cannon base. I've been inspired by a number of historical wargaming artillery bases I've seen recently, so I hope to tell a story with the artillery bases for this army. Below you can see the cannon. I've chosen to paint the gun carriage with Tau Sept Ochre, one of the accent colors I'm using in my force. I like the muted tone that almost looks like it could be unpainted wood (with a great yellow tinge to it to offset the dark metal of the fittings). 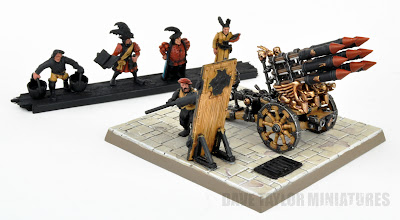 And here is the first artillery base I started on, the Helstorm Rocket battery. You can see the "story" arrangement here. Not long and I'll have this finished up completely. 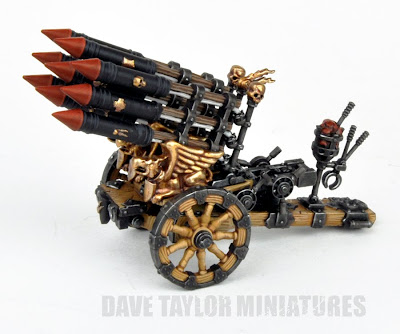 In my first few games, the Helstorm did not treat me well. However, on Tuesday night, while fighting against Jake's Skaven, it did manage to take out over half a unit of Plague Monks in the first turn, so it can't be all bad. 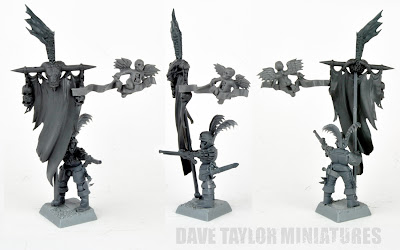 Finally, here's a look at the Battle Standard Bearer I've assembled for the army. I know he technically can't have that pistol, but I think it looks good and fits with the blackpowder theme of the army (as does the crazy clockwork cherub).
Cheers
Dave
Posted by davetaylor at 11:30 AM