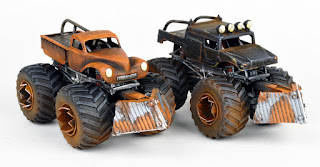 The Client received his package of twelve Monster Trucks yesterday, and he was very pleased (which, of course, makes me very happy). This was a great commission to work on as I was given free rein, allowed to channel my inner George Miller, and create some crazy stuff. A few of the creations have also prompted The Client to adapt the rules for his games at AdeptiCon 2016, which is pretty cool in itself. 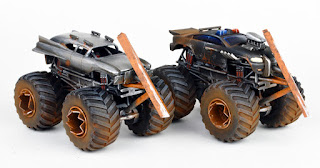 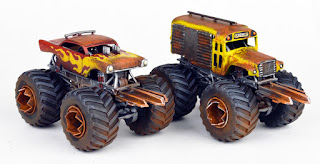 Included in this batch of trucks are a couple of homages to earlier Mad Max films, but I'll talk about that later. 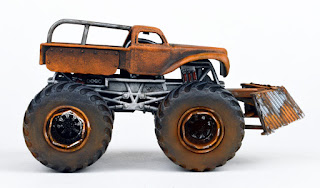 This farm truck didn't need too much converting, I gave it the flatbed/fighting platform, hand rail, and armor plates on the sides. Once the cultivated rust paint job was added, the armor blended right in. 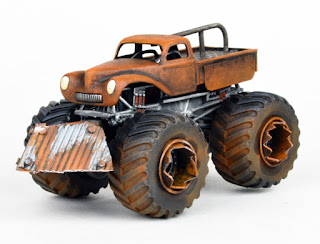 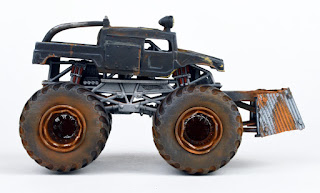 This truck joined the 'black paintjobs' group, with some scuffing and rusty patches showing through. I chose a desert yellow for the scuffed areas not yet attacked by rust. The rack of spotlights on the top (all originally speakers from the Imperial Guard voxcaster) were painted in a bone/white scheme, and thin cracks were painted across some of the glass fronts with a thinned dark brown. 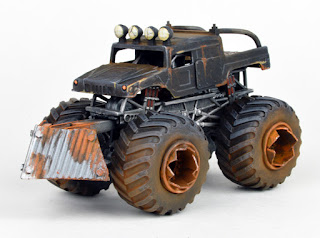 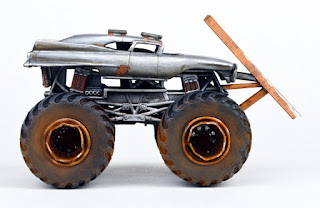 The old hearse (or coroner's vehicle) just had to get the shiny silver coffin look to it. The doors and hood of this one need to be painted in with thin lines of a very dark grey. 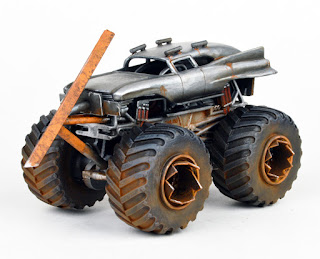 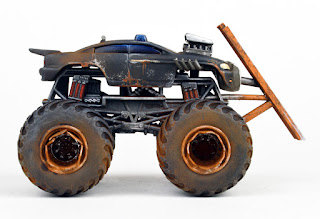 Originally the "Donut Patrol" truck, I wanted to keep this one fairly straightforward, but quite different to the silver car from the first batch (the one with the big pipes). The paintjob turned out to be all important here. The back body (along with the scuffs and streaks all help to accentuate the bright pop of the red and blue lights on the roof of the car. 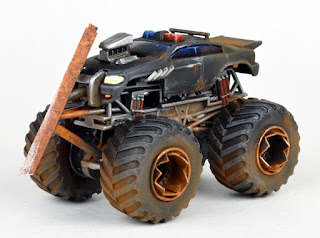 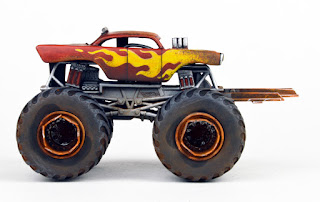 This car, while not a '59 Chevy BelAir, was the closest we'd come yet to the flashy car from the very first Mad Max film. That meant that adding the fake pipes on the hood, and giving it a red with yellow flames paintjob was pretty much a no brainer. Obviously it's not a copy, but more of an homage to part of Miller's original vision. 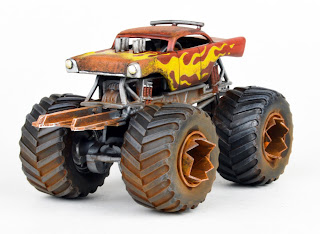 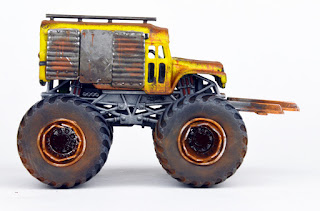 The last of the trucks is another homage, a not too subtle nod to the school bus in Mad Max 2 (aka The Road Warrior). All my life I thought that the bus in the film had a front-mounted engine (like this bus does), but when I started my more detailed research I discovered it didn't. The bus in the film has a flat front. So, again, this in an homage ; )

For those of you who have seen the film a ton of times, you might recognize the destination I painted in the front of this bus as the place the "good guys" are headed to, "2,000 miles from here. Fresh water, plenty of sunshine. Nothing to do but breathe!" 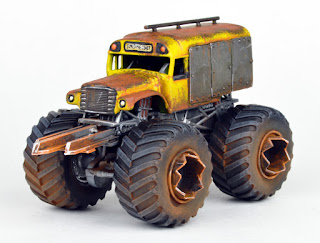 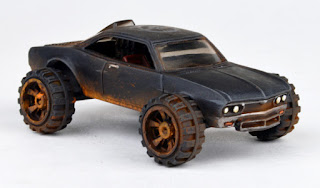 And as The Client had been very enthusiastic and generous, I decided to add in this little bonus. I decided to give his trucks a rabbit to chase. It was a simple wheel swap on a smaller muscle car I picked up a while ago, and then a simple but effective paintjob: black with some rusting along the lower panels. 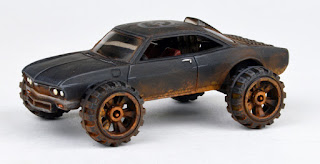 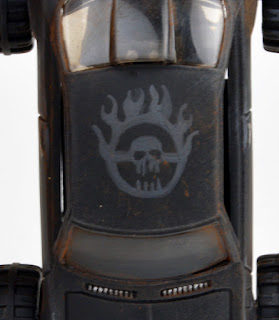 I topped it off with a quick Immortal Joe logo, just so everyone was reminded of who is in charge.

It's about 150 days until AdeptiCon, but only three weeks until the tickets go live. Make sure you mark your calendars for November 23rd. Click HERE for the preliminary event listing : )

Cheers
Dave
Posted by davetaylor at 7:25 AM