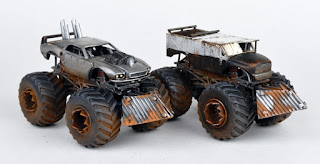 In yesterday's post I presented the construction photos for the first batch of Monster Trucks that will be making an appearance at AdeptiCon next year. Now I'm ready to show off the finished goods : )

Note: I actually finished painting these last week, I'm not that fast. 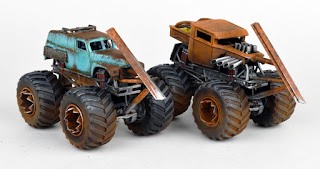 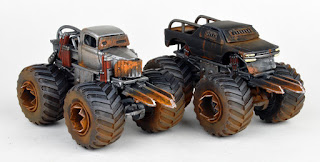 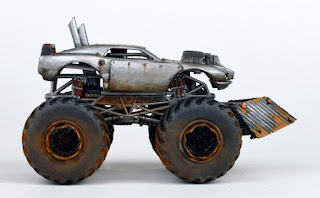 When it came down to painting up the trucks in the Mad Max: Fury Road style, I had a fairly limited palette to work with. With the exception of a handful of vehicles, the cars and trucks of MM:FR are either silver (polished metal or chrome spray), black, or cultivated rust. This first body has the shape of a '70s muscle car, so I decided to go for the shiny (and chrome) look like the re-worked Interceptor (aka Razor Cola). This car is the one with perhaps the smallest fighting platform area, tucked away between the exhaust pipes. 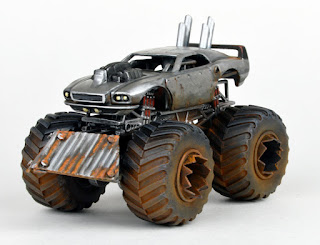 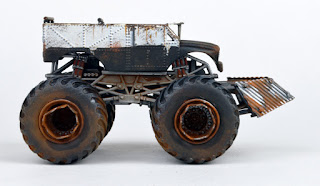 When I was converting this armored truck, I decided to get some online inspiration and Googled "armored truck" images. One of the first to pop up was this armored police van which matches the truck VERY closely, so that supplied the color scheme (with additional scratches and rust streaks, of course). 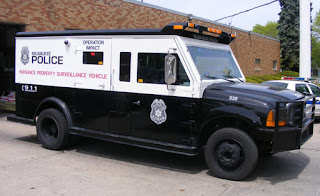 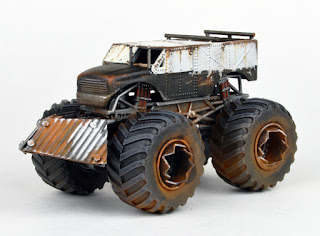 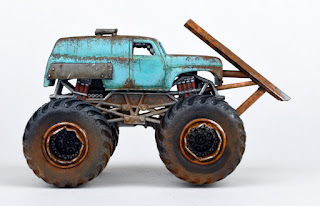 When I first started on this project, someone asked if I could include a truck painted in a similar fashion to my Bullet Farm Truck. I couldn't resist, so the Grave Digger truck got the teal and rust treatment. The rust on the body is several layers of sponging, from a dark brown through to a bright orange. 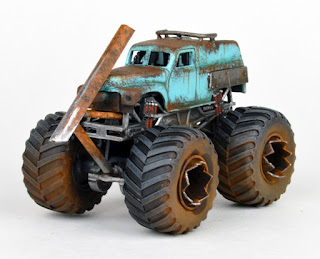 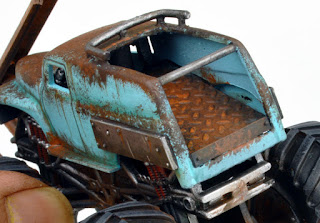 The fighting platform in the back of this one is sloped and all kinds of rusted. 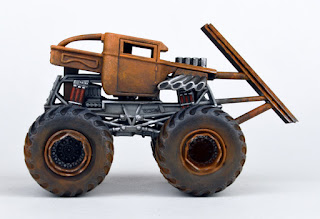 This truck got the "cultivated rust" look, much like the Elvis car from MM:FR. Rather than just sponge the top of the car, I took the sponges all over the body, and spent a little extra time afterwards shading some of the panels back with brown and black washes. 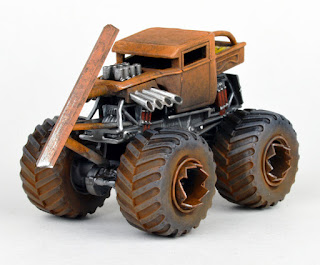 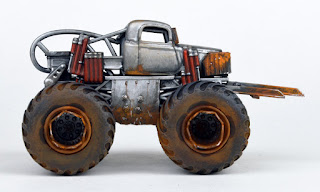 This truck initial reminded me a lot of the Bigfoot truck from the movies, for obvious reasons. So, I decided to paint it up in the shiny style, offsetting that with some rich, rusty orange patches. 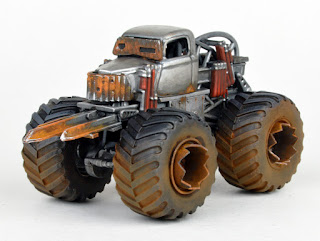 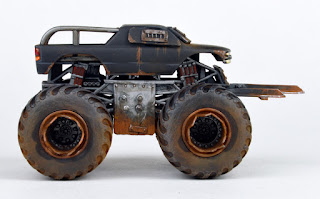 And finally (for this batch at least) I went for one of the black vehicles. I added scratches and small rusted patches around the truck, as plain black would have been a bit boring. In the end, the highlighting and weathering really give the matte black some great depth. 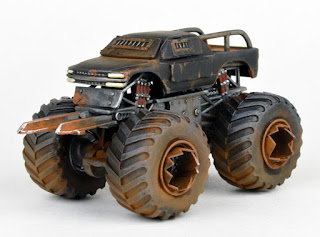 I hope you like these paintjobs. Next up, the construction of the second six trucks : )

Cheers
Dave
Posted by davetaylor at 9:50 AM