Thanks to everyone who voted in my poll. I thought there might be a bit more of a spread in the results, but even at the end things were pretty close. The two-tone scheme garnered a mere 7% more than the simple grey scheme, suggesting it should be the winner. However, all of the commenters went for the simple grey scheme, providing some very insightful reasons for choosing that one. So, I'm going for the grey scheme. More on that later. 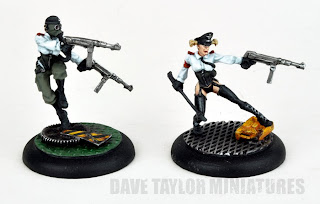 Above and below you can see the front and back of Doctor Hugo von X's twin daughters, Ilsa on the left and Gretel on the right. These two characters are inhumanly fast and strong and essentially run what is left of the research facility beneath the Rock of Gibraltar. These are some of the most finely sculpted and cast 28mm metal figures I've every had the pleasure to paint. They seem so incredibly petite, but they stack up really well against the Zombies from my last post. 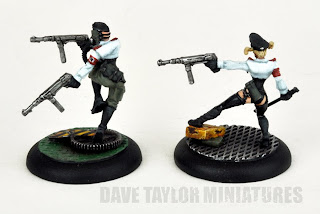 Below is the Blitzhund, a lightly armored, incredibly swift killing machine. The Blitzhund is capable of sniffing out the enemy in the dank and crumbling corridors below the Rock. 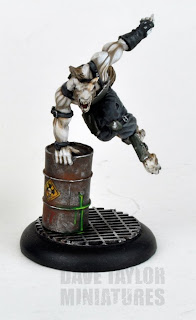 I had a lot of fun painting the Blitzhund. For his whitish pelt I started with Khemri Brown, and highlighted it by adding more and more white to the highlight mix. The armor plates were basecoated with the Vallejo paint German Camouflage Dark Green, and highlighted with German Fieldgrey. 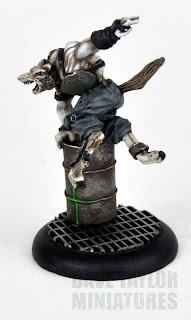 Although the Blitzhund on the Incursion site features camo pants similar to a Fallschirmjager pattern (UPDATE: actually an SS camo scheme - thanks Alex), I decided to go with a simple grey. I'm also really happy with the "warning label" on the barrel of toxic agent (see the first Blitzhund picture), which I freehanded based on the "studio model". 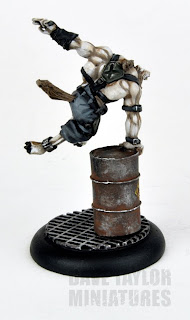 And the final beast on the side of the evil Nazis is the brute to end all brutes. Son of Doctor Hugo von X, Hans the Hunter did not escape his father's crazed predations. After a battery of experiments, he is left the twisted hulk you see below. 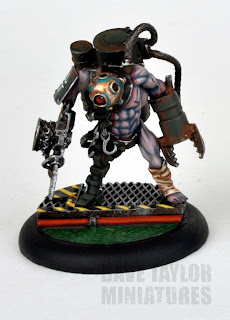 For the flesh I started with a basecoat of a Shadow Grey/Liche Purple mix. I then highlighted up by adding Dwarf Flesh, then small amounts of white. The armor plates and barrels are painted in the same fashion as for the Blitzhund, basecoat of Vallejo's German Camo Dark Green highlighted with German Fieldgrey. 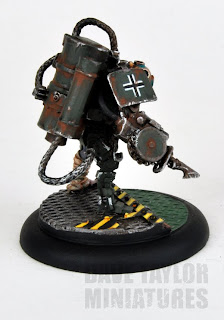 Perhaps my favorite part of the paintjob on this model is the rust/weathering. I thinned down some Vallejo Red Leather and applied multiple thin washes in strategic areas over the plates. 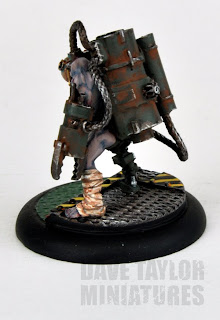 So, I hope you enjoyed seeing these guys. Next up, the American 7th Armored.
Don't forget, all of these models and more will be going up on an auction this Sunday to benefit my buddies, John and Justin.
Posted by davetaylor at 5:21 PM