Last week's post on the Chrono Gladiators received quite a bit of feedback (which I always enjoy) and not all of it positive (which can be helpful if phrased correctly). I took a bunch of this feedback into account, modified the models a little (despite their already primed status) and got stuck into painting them. 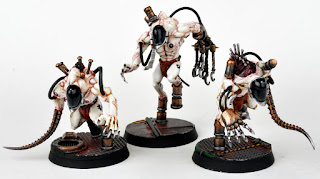 The biggest fear some folks had was that they were looking too Dark Eldar and not enough Mechanicum. I'm not sure if I've been able to redeem them in the eyes of these folks, but I'm happy with the results, so I guess that's the main thing ; )

One comment was that the legs looked a little too bestial, and I agree that it was the legs/feet that were causing some of the issue. I stepped back and thought a little about the influence behind much of this army - the crazy work of John Blanche. Then it hit me.

These legs weren't too bestial, they weren't bestial enough! The model was heavily "wolf" influenced, so I decided to take a suggestion from commenter Mkvenner and add hooves into the mix. And not just horse hooves, but crazy, metallic hoof collars for the bottom end of the leg. There's an interesting kind of "fetish" look to them, something that makes the model feel awkward and unnatural - voila! John Blanche inspires again.

Here's a size comparison shot of the tallest and shortest of the bunch along with the Plasma Cannon servitor and the Thallax.

I trimmed off some of the pointy bits on the faceplate too, filled in the holes with putty, filed it down once dry, and added a couple of plasticard squares on the sides, to mimic the Thallax faceplate. The painting of the faceplate was achieved in the same manner.

And here are the three of them ready to join the Mechanicum horde!

I hope they worked out and that you like them as much as I do.

As always with this army, the bases are from Dragon Forge Design.

UPDATED: My apologies to Luke Jordan, but I forgot to include these links to pictures of his beast.
Of course, there is plenty of "derivative" work going around in our toy soldier world, but sometimes people stumble onto the same cool idea completely separately - a "great minds think alike" kind of moment. Here are links to the first of Luke's beasts, built sometime last year I think. Note that we both used the mechanical Talos hand to replace the gravestone in the Crypt Horror's hand : )

Cheers
Dave
Posted by davetaylor at 11:29 AM