The Artillery Train of Nuln (Part 9) 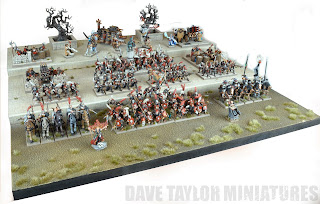 Grab a cup of coffee, sit down, and relax...there's quite a lot in this post : )

As faithful readers will remember, last Saturday I took my army to the GW store at White Marsh to compete in the Armies On Parade store heat. I was the winner on the day and you can check out my shots of the cool looking Nurgle force I was up against in this post here. Well, I managed to get some photos of finished pieces last Saturday and tonight I finally have a chance to put them up here.

The photo above is the entire force as it was displayed at the store, complete with flocking.

Some of you may remember the Helstorm Rocket Battery I had painted up. I was looking for a few suggestions regarding a design for the back of my merchant's cloak. You provided lots of great ideas, some of which I really wanted to try out, but time and the primary color (the turquoise) didn't really help out with the decision making. Fortunately I spotted the perfect thing to key off. I simply repeated the Empire eagle motif, found on the back of the "rocket board", in a slightly lighter version of the turquoise. This way I could create a direct visual link, and not feel like I was introducing too many other colors to the piece. Rest assured though, those ideas will surface again. 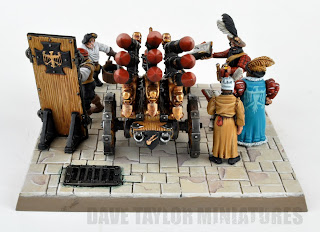 I also added a small N in the lower right corner of his cloak. Just something for a little fun. 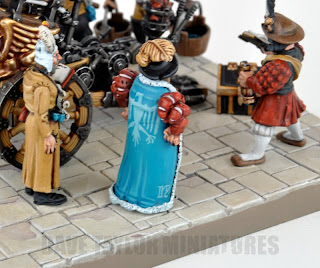 The next piece I finished up was the second cannon. I wanted this crew to have a stronger sense of urgency, as though the enemy was almost upon them, the barrel is loaded with grapeshot, and it's almost time for the last ditch defense. 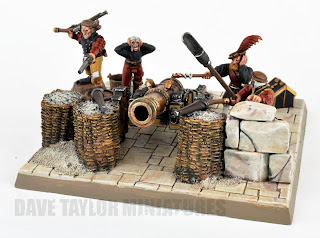 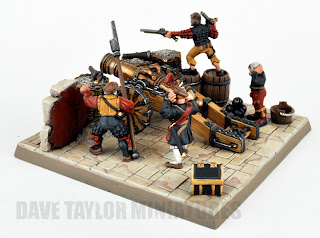 I figured that with such a short range war machine in their hands, the Helblaster crew would also be about to mount a desperate defense (or run away as the case may be). The guy with the barrel swab has obviously had little weapons training, unlike the gunner reaching for the sword in the rack, but both are showing a great deal more courage than the third gunner about to flee the scene. 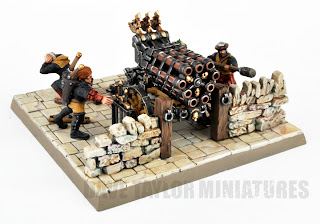 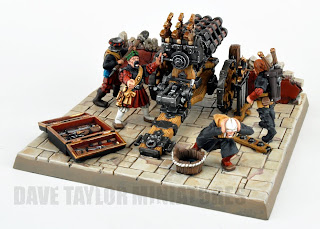 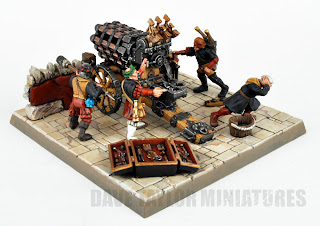 The Steam Tank came out very nicely I think, considering it was a bit of a "Frankenstein" job. I had to stitch together various parts from the plastic and metal kits, as well as a few sheets of plasticard. The dark metal of the body was painted in a slightly different way to how I painted the rest of the dark metal on the other war machines. I mixed Boltgun Metal with Flames of War/Vallejo German Grey. This gave me a very dark and smooth basecoat that looked great once I added a couple of layers of thinned Badab Black. 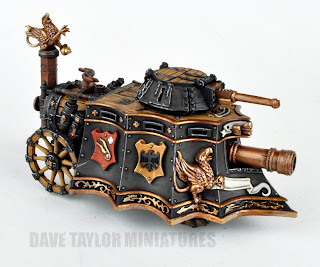 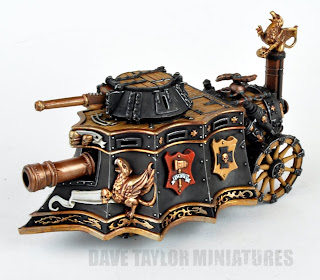 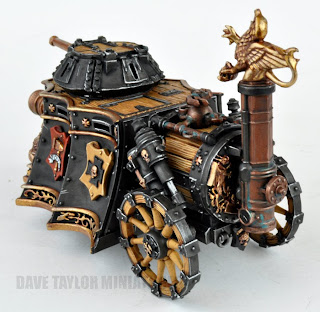 After checking out the photos above, I realized I hadn't named the beast, so I scoured the internets to find the names of the original Steam Tanks, and immediately settled on Pride of Nuln. Very fitting.

So, I was nearing the home stretch. Just a few characters to go. Here's my Battle Standard Bearer, regally bedecked in his shiny gold armor. I knew his uniform and the banner were going to be black and I really wanted something that was going to pop. The gold works really well, and has it's own lovely depth added by applying two thin coats of Secret Weapon's Amethyst wash to the recesses.

I decided that this relatively small force (for a city the size of Nuln) must serve defending one of the numerous gates or waterways into the city. For no particular reason I settled on the North Gate, so this army is now "The Northgate Defenders". Appropriately enough, a portcullis and a cannon are the symbols on the Army Standard. 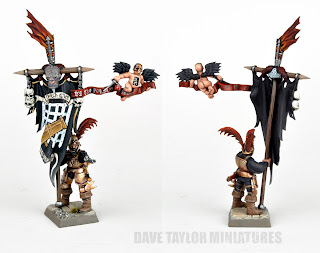 And finally (or so I thought), I had to finish up my Engineers. A friend of mine had recently lambasted me for not running Engineers with my cannons. He went so far as to say that it was the main reason I'd lost so many games with the army. I dug through my boxes of Empire bits and put together these two daring students of blackpowder from plastic bits alone. I'm quite happy with them. Of course, in my last game they helped kill a Hellpit Abomination, which promptly came back to life with six wounds and rampaged through my line. Thanks for the advice John ; ) 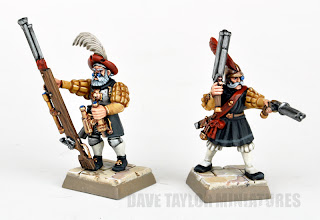 The last thing I had to do was finish off the "planter boxes" I'd made. Almost all of the bases in this army are from Dragon Forge Design (their Temple line). Jeff was kind enough to let me know where his secret stash of textured plasticard was sourced from (the UK actually) and I had to make a couple of orders to get enough for the display base. I had a few sheets left over and knew I needed to add some height to the terrain. I painted up two of the twisted GW plastic trees and built these two "planters" out of the textured (and some untextured) plasticard. A little bit of putty, paint, and tufts of grass and they were good to go. They are separate from the table for ease of transport. 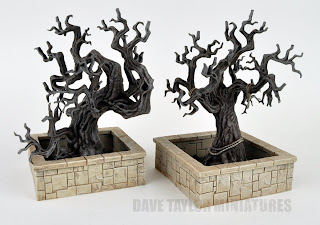 I hope you've enjoyed the tour through the latest additions to the Artillery Train. The Marienburg Landship is slowly grinding its way towards my painting table.