So I took a few photos over the weekend. Photos of my Legio Custodes army. Tonight I spent a bit of time correcting levels and contrast and montaging a few images, all in preparation for selling off this army.
I originally built this army in 2004, after my Genswick Rifles army got a really good reaction at the Baltimore GT. It took me a while to get all the ideas together, but once I had them together I hunkered down and got to work. Sometimes the conversions worked smoothly and I'd get three or four models done in an evening, sometimes I'd stumble and it'd take a few nights to get one done.
Originally I ran this army as a Space Marine army with two squads of allied Grey Knights. It worked pretty well, a fairly balanced list. It lacks a little on the anti-tank front, but as long as you don't meet a mech-list, you should be ok.
Of course, now Grey Knights can't ally with Space Marines, so I think this army could now work as a Blood Angels list, not the most competitive BA list, but good for friendly games : )

First up, this is the HQ model for the army. I used to use it as a Chaplain (hence the black armor, to avoid confusion), and in the BA list it could be used as a Reclusiarch.

Above is the first "Grey Knight" squad. It's an eight-man squad with two incinerators. 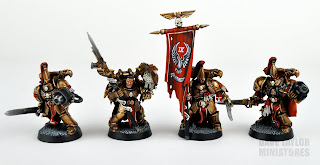 Above is the second "Grey Knight" squad. An eight-man squad with two psycannons. If you went with the BA list idea, these two squads of 16 men could become two squads of Sanguinary Guard (each with an Inferno pistol using the psycannons) plus an Honor Guard (with two flamers) and a Captain. You could do a little shuffling, or use the banners as banners (I never did in the games I played, they were just there for the aesthetic).

And here's a shot of a few of the cloaks. All of the "Grey Knight" models have these custom cloaks. 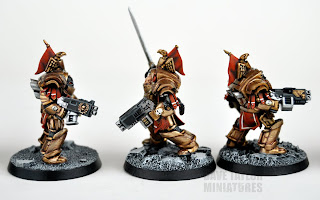 Above: this is the Terminator squad. At the moment I have two heavy flamers in the mix, but I'll replace one of them with another stormbolter before the army goes up on eBay. 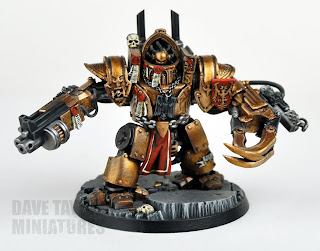 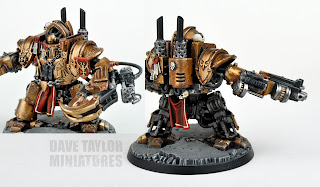 Above: My first Custodes Dreadnought is rocking a twin-linked heavy bolter and DCC with heavy flamer. It was built for the 3rd edition SM codex when that was a possible option, then the HB was used as an Assault Cannon when we lost that option in 4th. The torso is based on the torso of Inquisitor Tyrus from GW's 54mm Inquisitor range. 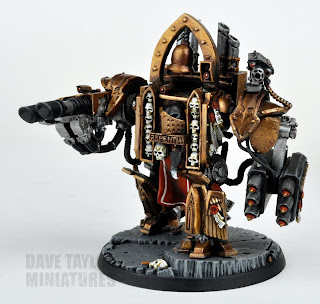 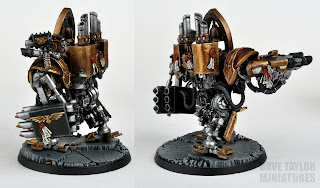 Above is my second Custodes Dreadnought, equipped for long range support with a twin-linked lascannon and missile launcher. The torso was based on the chair of Inquisitor Lord Karamazov from the Witch Hunters range.

These are the two Rhinos (typically used for the Tactical squads): Gladiator and Imperius. They are the MkII Rhinos with Forgeworld armor and side doors. On the Imperius I hinged the left side, rear, and top hatches. 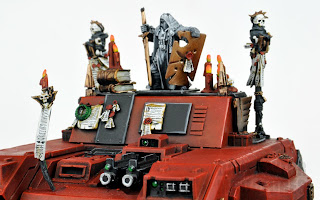 And finally the Land Raider centerpiece. This is the Forgeworld MkIIb Land Raider, built with the Eagle doors, and with a significantly large addition to the top. I wanted to build something special so I added the sarcophagus/shrine of an Imperial Hero. Lots of plasticard and bitz work here.
Anyway, that's the army. I hope you like it.
More details on the auction to come.
Cheers
Dave
Posted by davetaylor at 7:40 PM