A busy week but still no new Pact?

Well, this week I actually got a lot of hobbying done, but not a lot of Blood Pact fun to show for it. Here's the rundown of the work I did this week:
• Finish painting four Departmento Munitorium Trucks
• Assemble a full Soviet Guards Rocket Mortar Battalion for Flames of War (that's eight Katyushas that can drop the Devastating Bombardment template!)
• Base 61 Romans from Warlord Games for my Warhammer Ancient Battles army
• Get started on my entry for the Stegadon Conversion Challenge
I was also able to complete a commission piece for a friend of mine who was looking for a "test model" to help guide him through what promises to be a really nice Blood Angels army. The two pictures below are of the ubiquitous Blood Angel Assault Marine. I'll paint the Chapter, company, and squad markings once we've decided which company and squad this guy will belong to. 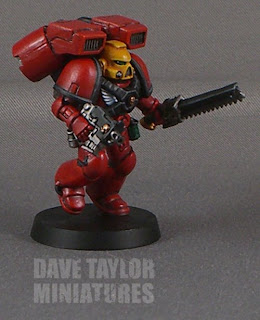 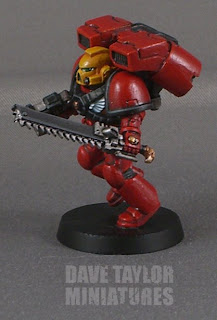 The recipe for the red was unlike my typical red but I do like the depth it gives.
The process was basically:
• Primed black and basecoated Mechrite Red.
• Washed with Badab Black
• Highlighted with Mechrite Red/Blood Red mix (60/40)
• Highlighted with Mechrite Red/Blood Red mix (20/80)
• Highlighted with Blood Red
• Highlighted with Blood Red/Blazing Orange mix (50/50)
• Edge highlighted with Blazing Orange
• Washed with Baal Red
That's about five more steps than my typical red, but I'm really happy, as I said before, with the depth.
Anyway, the next project to work on is to take the four kits pictured below (Leman Russ, Chimera, Basilisk, and Ork Trukk), a lot of plasticard, and a few bits of resin, and turn them into the five most "common" Chaos vehicles described in Dan Abnett's Gaunt's Ghosts series. These items will become the SteG4 armored car, the At-70 Reaver, the AT-83 Brigand, the N-20 Flame Half-track, and the Usurper self-propelled artillery piece.
Should be fun! 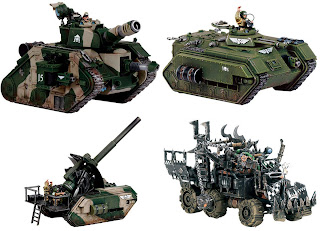 Posted by davetaylor at 6:45 PM