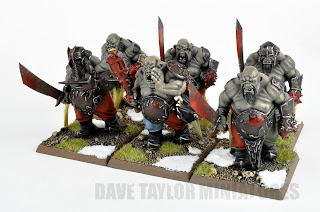 A couple of weeks back I mentioned I was getting going on my Ogres again, thanks to the awesome new units/miniatures recently released. Well, Operation Big Boy is underway and I figured I'd give you a break from looking at lots of little grey tanks.

As you can see by the photo above, my Ogres are painted in the green/grey the 2004 GW Design Studio decided on. At the time a lot of hobbyists questioned the decision, but GW had decided on a change, and likened it to the Orcs' quintessential green skin, and the recently updated Lizardmen blue skin. Lots of people ignored that, and continued painted their Ogres in caucasian skin colors. I mean, it wasn't like there was a paint color that had been released to support the change (apart from a spray can of Ogre Flesh (available only in the UK, I believe).

Anyway, I was one of the ones who accepted the challenge, mixed up batches of our own Ogre Flesh paints and cracked on. During late 2004, 2005, and early 2006 I painted over 100 Ogres worth approximately 10,000 points (thanks to characters and Rhinox riders etc.)

Imagine my confusion when the recent set of releases showed that the skin color of the Studio's 2011 Ogres were now back to their pre-2004 hue. I had a wonderful sense of "1984-dejavu" when I read through the army book and could find no mention of the skin color change or variance etc. at all. It is almost like it never happened (Haven't we always been at war with Oceania?)


So, with soooo many Ogres resplendent in their grey skin, I'm going to stick with it. 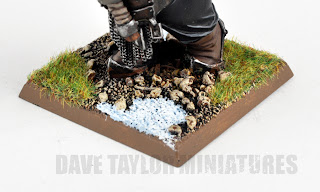 Above is a shot of my original basing, snowy patches on my "spring thaw" basing was simply done by painting a patch of Space Wolves Grey and drybrushing it with Skull White. That just won't do for this modern era. I'll talk about my new method a bit later. 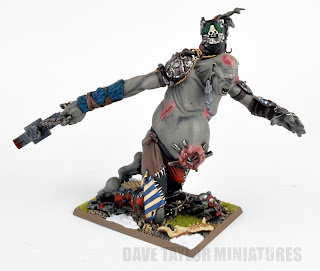 On to one of the current centerpieces of my army, a Slavegiant. This guy has been recently conquered by a Tyrant, and still has a not of scars and bruises to show for it. His Gnoblar handlers are struggling to get his collar (with attached millstone) affixed before he disappears over the hills. 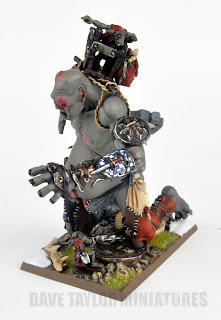 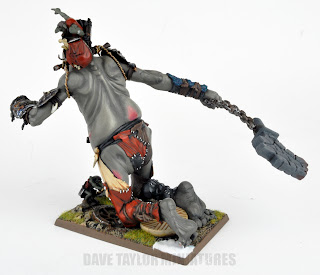 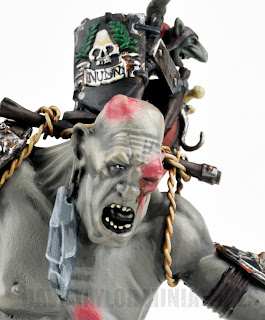 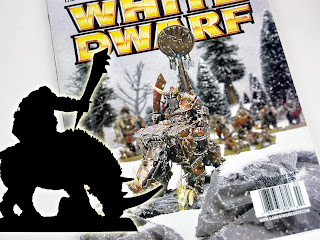 And here's a bit of a teaser for a big scratchbuild project I'm very keen on starting. It'll be something I haven't done in a while : )

In last minute news, my daughter and I will be joining family friends of ours in a walk to support research into Apraxia of Speech, a speech disorder that prevents sufferers from being able to speak the words they want to say. Our friends, Dave and Angie, have a wonderful daughter afflicted with this disorder, so when I heard about the walk yesterday I figured joining and helping out was the least we could do.

If you have a few spare bucks kicking around that you can pitch in, head to our team page, Elsa's Angels, here and donate away. We would greatly appreciate it : )

Cheers
Dave
Posted by davetaylor at 9:55 AM