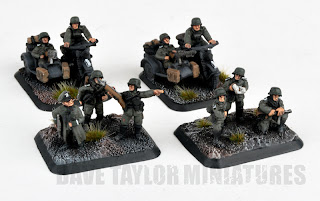 I can't believe it was only a month ago that I started on this fun little project. I also chuckle as I type the word "little" as I now have close to 3,000 points of painted Germans for FOW (that includes the Light Panzer Company I painted last year).

If I want to upgrade my platoons from Schutzen to Panzerschutzen, I now have a dozen Sd Kfz 251/1 halftracks ready to roll! I might get back to painting the rows of seated soldiers that are supplied with the transports. I think it just adds that neat little touch. 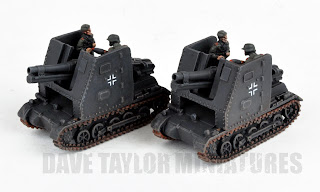 Once I had the necessities sorted out, I moved on to the rest of the AFVs from the Motorised Rifle Company boxed army. Above are the Self-propelled Infantry Guns, the 15cm sIG33 auf Panzer Is. Try saying that three times fast. For the crew I painted their epaulette piping red, instead of the white I've used for my infantry, but more on Waffenfarbe in a different post.

The Panzerjager Is are my Early War tank hunters. As such, they have pink piping, as befits their branch of the Heer.

And finally for this batch I have an Assault Gun platoon, two Stug A assault guns and their command halftrack, an Sd Kfz 253. 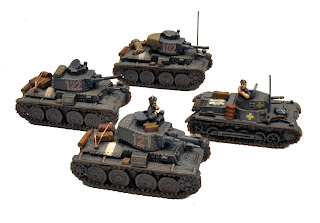 You may have noticed some strange white lines across parts of my halftracks and Stugs. I added these primarily for visual contrast on the dark grey hulls. They were inspired by some tanks I saw at Historicon back in July, tanks painted by Bill Wilcox (and shown above). You can see the white stripes painted on the back of Bill's beautifully modeled and painted tanks. These were apparently used by some tank units as aerial recognition markers, with the aim of clearly showing the Luftwaffe where the friendlies were down on the ground. 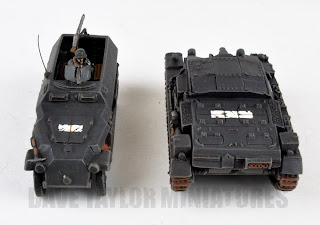 I decided, rightly or wrongly (ie. with no further research) to add these to my halftracks and Stugs. I'll be going back to add them to my Panzers once I've got the rest of the collection sorted out.

So, if you've enjoyed these models so far, I know you will be blown away by checking out the miniatures in this thread from the Flames Of War forums. I was floored when I saw the detail that could be achieved on 15mm miniatures and I know that when I get to eventually doing a very researched, themed army, this will be the standard I will be aiming for. Please check it out.

Posted by davetaylor at 7:22 AM

Email ThisBlogThis!Share to TwitterShare to FacebookShare to Pinterest
Labels: Flames Of War, Panzergrenadiers