The Steel Legion get some Transports! 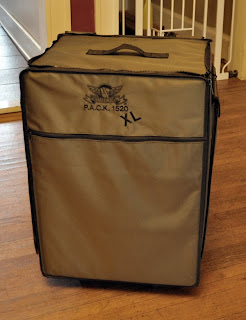 Last night the mighty Battlefoam case (a rolling PACK 1520 XL to be exact) arrived at my house. I burst straight into it's cavern of foamy goodness and started packing in the models. 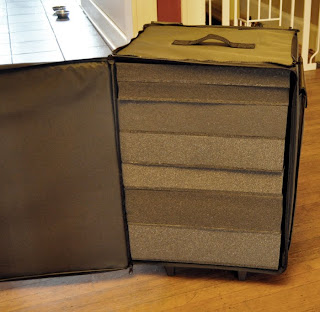 With the front hatch open, you can see the 22" of foam stacked from top to bottom. Those of you who were reading this blog around this time last year might remember the post I did on filling the Battlefoam case with the Storm Wardens army. If not, here's that post. With Battlefoam donating FOUR cases this year (including lots of custom foam trays), I felt it was only right to do the same sort of thing.
Here you go: 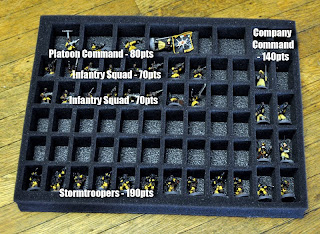 Tray one, holding 550 points, still has quite a bit of room for adding another few squads. 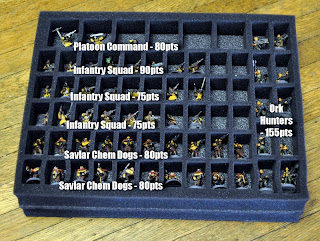 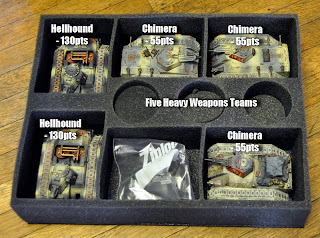 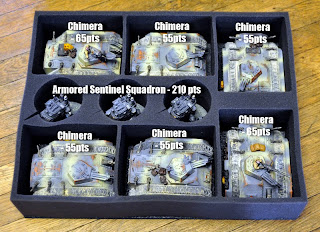 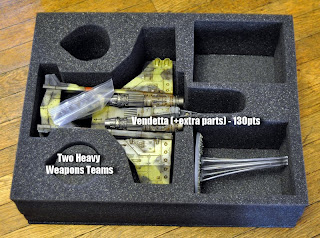 Tray five has a little room left over, but currently holds the 130 points of Vendetta (plus the other two heavy weapons teams). 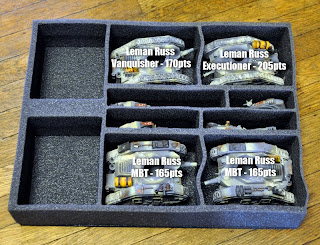 With a little extra room for more tanks in the future (or part of a surprise) Tray six holds 705 points of big gun goodness. 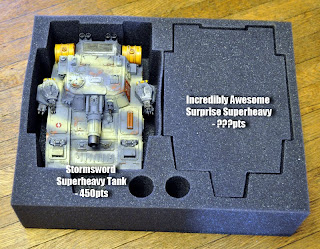 And tucked away down the bottom of this case is the Superheavy tray (or Tray seven). It currently holds a 450 point Stormsword (more about that in tomorrow's post), but it will also be shipped out with another piece of superheavy excitement. This surprise tank will hopefully be shown on Monday or Tuesday, keep your eyes peeled.
So, there you have it. A massive Steel Legion army sitting in around $300 worth of foam trays and sturdy rolling luggage (apparently the "canvas" is actually a ballistic material, ie. used to make bullet-proof vests).
For those of you who weren't tallying as you went. This army currently stands at 3,455 points, with Commissar Yarrick, the Master of Ordnance, and the surprise Superheavy still to go.
Yes, this beast of a collection will top out at OVER 4,000 points! Thank you Battlefoam, for providing an awesome transportation case for this monster!
How can you win this? Donate more money to Doctors Without Borders via the Paypal button in the top right navigation, Go on, do it now!
Cheers
Dave
Posted by davetaylor at 8:16 AM