A little bit of work done on my Diorama entry for Golden Demon over the weekend. I had this idea over ayear ago, and was even able to chat with Dan Abnett at Adepticon '11 about it, refining my ideas about it all.

In Traitor General, Dan Abnett first introduced us to an iconoclave. This is typically a building/area of great significance to an Imperial populace (usually a cathedral or something similar). When a Chaos force conquers a planet and enslaves the former Imperial citizens, many of them are forced to bring all Imperial statues and icons to the iconoclave, where other citizens spend grueling days and nights systematically reducing these icons to dust. They aren't allowed to blow them up, it's not simply about the destruction of these symbols of the Imperium, but it's about the Dark Powers forcing the gradual and permanent grinding down of all that is the Imperium, most importantly the spirit of it's people.

Above is the model that is the focal point of the diorama, a nameless citizen who has paused in his soul-crushing duties to reflect on what was. I'll be adding a bit of weathering in the form of pale powders to this model, but I wanted a few shots of him before the dust went on. One other element of the story to note is the imagio on his right arm, a chaotic parasite of some kind implanted by the conquering forces and used to identify the citizen and his schedule under the new regime. 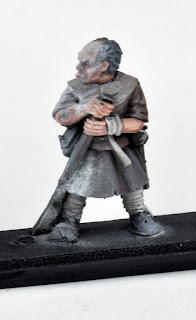 Here is one of the supporting cast, a citizen covered in stone dust from the statue being destroyed before him. He also has an imagio showing on his right forearm. 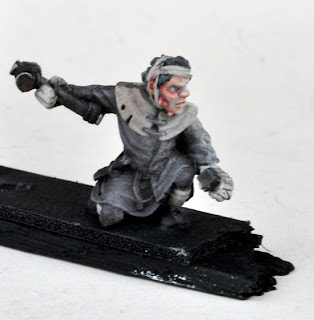 And another citizen crouched by the statue, chipping away for hours on end, and already suffering from the debilitating taint of Chaos (note the lesions and pustules).

Their task master, meanwhile, will stand high above them on the walkway you see below. 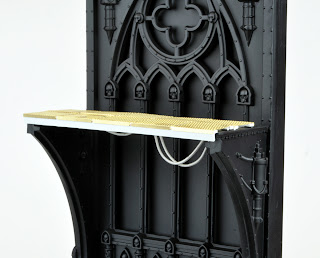 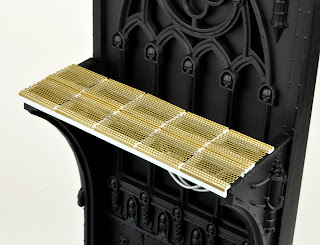 The brass-etch walkway pieces here are from Secret Weapon Miniatures and are absolutely perfect for what I had in mind. Last year, around this time, I had to make a tough decision and not pursue this diorama. I was busy with the Marienburg Land Ship for my AoP entry. But since then, this release from SWM has made it possible to bring all my thoughts together.

I hope you like it, there's still a little more work to go.

Cheers
Dave
Posted by davetaylor at 4:00 AM