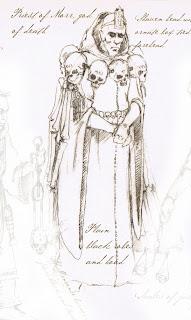 I've been doing quite a bit of thinking about my Warriors of Morr over the past few weeks, and my plans are starting to coalesce. I've decided that my "list" will be something like this:

• 12 Knights of Morr (refurbishing models I built and painted ten years ago)
• 30 Flagellants (I've had the plastics for a long time but haven't painted any up as flagellants, I'll focus on the bell-ringing and hourglass accessories)
• 30 Spearmen (the rest of this post talks about my thoughts for these soldiers)
• 2 Cannons (I can't get away from them)
• 1 Mortar (you saw the beginnings of it in my last post)
• plus a few very characterful commanders, a massive rolling altar, and a few more hangers-on/onlookers.

For my Spearmen, I want to have them marching in column, on their way to war. As soldiers of Morr, they'll be in black uniforms, so I want to have a few things that can really push the look and iconography of Morr. To that end I hope to sculpt up a few pieces and have them cast up (for my own personal use only) that will help with that goal. Above are two ideas for heads for the Spearmen. Both are half-masks, the first is obviously a skull, while the second is more of a Venetian-inspired, beaked-nose mask that could echo the hoods worn by the Corpse Handlers (who will be my artillery crewmen).

Which do you think I should go with? I'd sculpt two variants of the design I eventually choose, and then cast the rest. 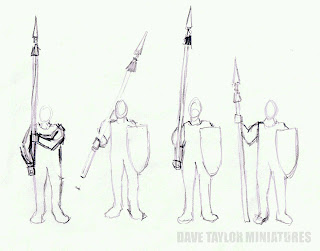 The arms of the Empire Spearmen are arranged in an "advancing phalanx" fashion, none of them are at ease or on the march, so I'm going to have to sculpt some new arms. At the moment I'm thinking I'll work on arms that'll provide me with the four poses above. If I do them right I can use sturdy brass rod and the spear shafts that will slide into the waiting hands. I can also then create a few different spear tips, halberd blades, and perhaps even a few scythe blades. 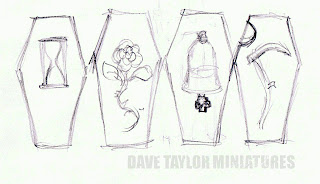 And the final step will be to create four or five different shield designs. At the moment I'm leaning towards a "coffin-lid" look, but could be swayed. The sculpted icons would focus on the symbols of Morr: the hourglass, the black rose, and the scythe, with a smattering of bells and skulls too.

If you have any other suggestions, feel free to leave them in the comments below.

PS. I think my posting might be a bit spotty over the coming weeks as my second daughter is due to arrive any day now. There'll be a lot of rushing around, a lot of adjusting, and very little time for hobbying or blogging.
Posted by davetaylor at 8:29 AM