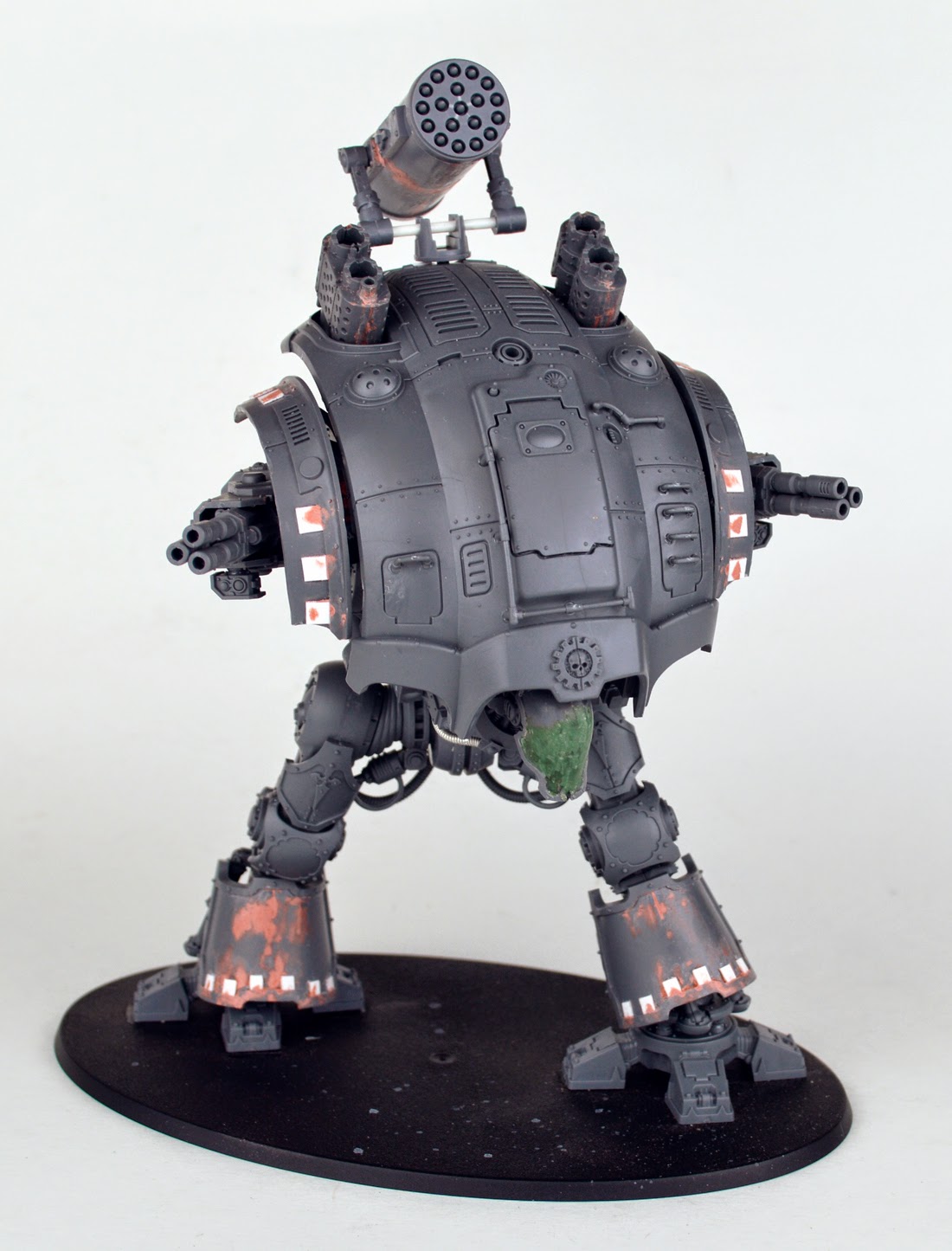 Well, there was certainly interesting (and, for me, completely unexpected) response to my last post. In that post I gushed over the work of Clarence, and then presented my copy of his work. I love all of the elements of this conversion, and I love all the ways they go together.

There were quite a few folks that did not like the conversion, some who hated it. I was certainly put on the back foot, feeling pushed into a defensive stance, not a place I feel anyone should be when we're talking about having fun with our toy soldiers.

I felt, therefore, it would be good to step back for a day or two, take an objective look at the constructive criticism that I've always tried to welcome, and then respond.

The general concerns about the model were as follows:

• The gun arms were too small, comically/tragically so.
• The carapace was pushed too far forward, creating a feeling of incredible overbalance.
• The exhausts were not at a corrected angle, exacerbating the feeling of the previous point.
• The legs were too long.
• The head was in danger of being "lost" underneath that large carapace.

My responses to these concerns are:

• I LOVE the look of the gun arms. Are they proportionally smaller than the original inspiration model? Yes, but I feel that this disparity is a considerable part of their charm. I'll be keeping these at the same size. Please, there is no need to labor this point ; )
• I understand the concern from a visual point of view (although in the universe of wonky physics that is the 30K/40K universe I don't think there's a "working" balance issue). I will be keeping the carapace at it's current angle, and anchor point, but I have decided to add a couple of features that hopefully will address the visual imbalance. More thoughts presented below.
• I honestly had not thought about these when building the model, so I'm alright with thinking about them a but more, probably taking the time to rebuild the exhaust pipes.
• I'll be taking a closer look at this. There might be 5-10mm I could cut from the thighs that would address the issue.
• I want to go with the smooth, black glassy look that I've used on some of my other Mechanicum models (the Thallax and the big combat servitors). This will need to be framed well. More thoughts presented below. 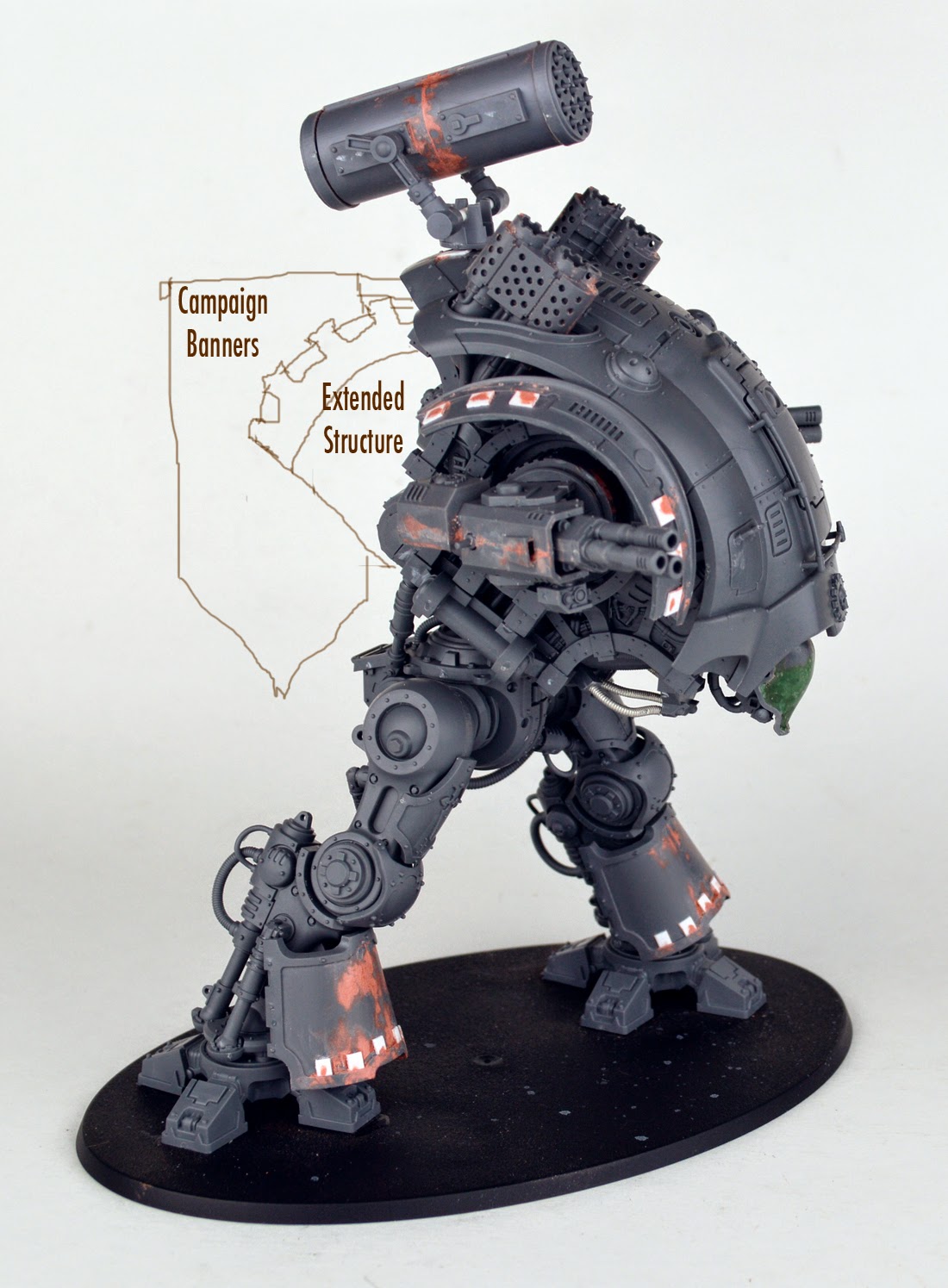 Two thoughts on my adjustment to address concerns on visual imbalance are:

• Make an addition to the structure of the Warden's torso, building it to follow other lines already in place. As it wouldn't be a part of the armor plating, it would have quite a utilitarian feel, with rivets and anchor points, much like the superstructure of the Warden itself.
• At least one, but more likely two, campaign banner hanging from a horizontal pole(s) extending from the back of the Warden. As these pilots are the older, grizzled veterans of hundreds of campaigns, it seems there'd be plenty of opportunity to go to town on many fun elements here. The bonus would be seeing they way it filled out the "gap" caused by tilting the carapace forward. 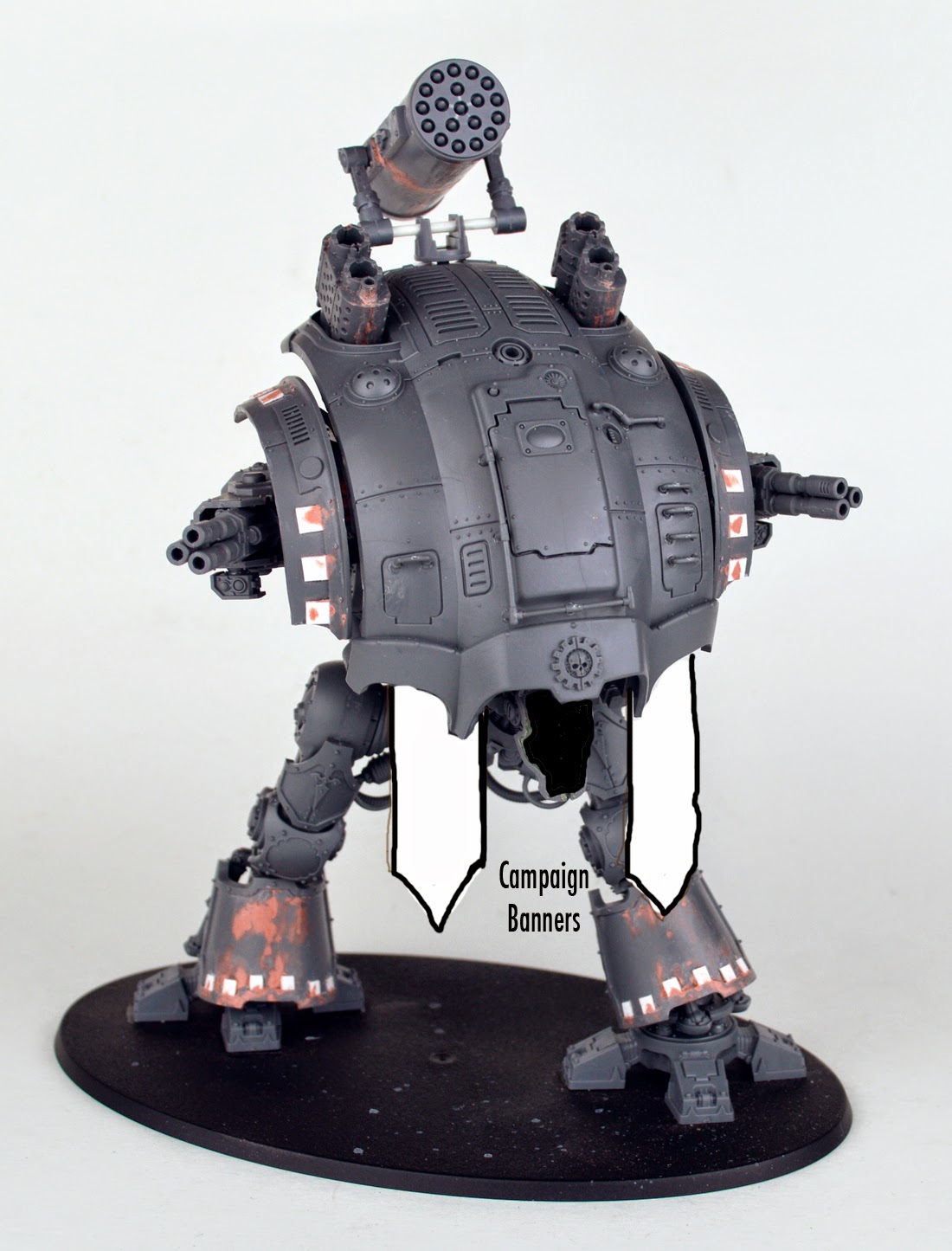 As the Warden doesn't have the shield or heavy stubber of the Paladin or Errant, I thought it would be a good idea to frame the dark/black faceplate with lighter/white banners. I think there are a lot of things I can do with these that can guide the eye to the "soulless" mask and ensure it doesn't get lost in the rest of the paint job.

I may be opening myself up for another round of criticism, but I'm ok with that, as long as it is constructive. It's how we can evolve and improve, right?

Cheers
Dave
Posted by davetaylor at 8:23 AM