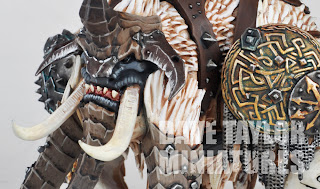 Well, I've been working hard on the Thundertusk over the past week. It's a glorious model with so much character to it. It's proving to be a tougher road than the Ironblaster, and that's saying something. Not that there's anything that's too hard, there is just so much of it. Until I started painting up the Thundertusk, I don't think I had an appreciation for the BIG monsters that GW has been releasing since 8th Edition dropped. The Arachnarok Spider, the War/Necrosphinx, and Zombie Dragon/Terrorgheist are cool, but as I don't play with either of those armies (or against them that often) I didn't really have a sense of just how cool they really are. Thanks to you Thundertusk, I now have a whole new appreciation. 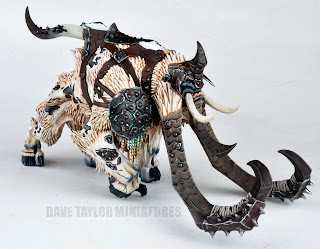 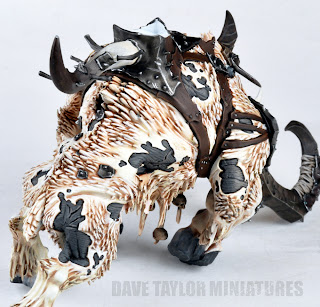 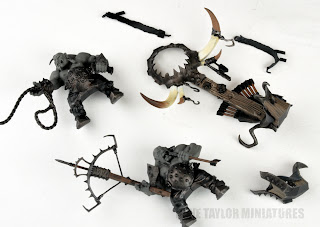 Of course, although the instructions obviously recommend gluing it all together before you start painting, I did not. Above you can see the pieces I'm painting it in, lots of sub-assemblies to make it easier to get it all painted with out breaking anything. I'd also recommend that you not attach the head of the Thundertusk/Stonehorn before you paint it, and whatever you do, do not glue any of it down to a base until it is painted! 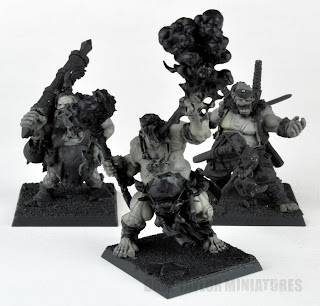 I'm also working (slowly) on a few other Ogres. The Firebelly is now underway, along with the female Maneater and the Ninja Maneater (which I've had assembled and primed for over five years. 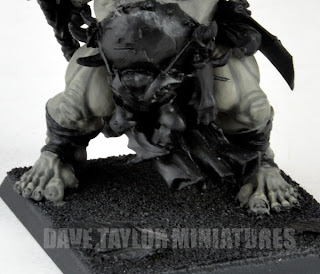 So far, most of the work on the Firebelly has bee confined to his heavily muscled legs.

And now for something completely different. Although I have no intention of buying Dreadfleet, I have been convinced to join in on another Charity Project. Chris Borer and Dave Pauwels have come up with a wonderful way to raise a bit of money for a worthy cause AND highlight the artists who are running many awesome hobby classes/seminars at AdeptiCon 2012. The project is catchily titled "Celebrity Dreadfleet" and you can read more on the custom blog, here. 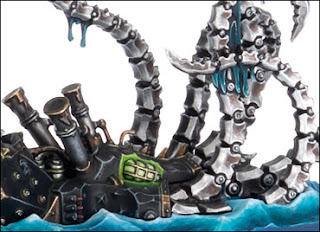 Strangely enough, however, I'm not running a class at AdeptiCon. I think I might have been press-ganged to make up the numbers. As you can guess from the pic above, I'll be trying my hand at The Black Kraken. Hopefully this will also give me a few styling cues and ideas for when I build my Ghark Ironskin on mechanical rhinox. : )

More news on this project (and other new bloggage) still to come.