Starting on some Dark Age models.

In my last post (HERE) I noted that I had done some Marketing Planning for Cool Mini or Not (CMoN). Towards the end of last year I put together a plan to help grow their two miniatures games - Wrath of Kings and Dark Age. The folks at CMoN liked my plans and have asked me to join them on a part-time basis during 2016 to see the plans implemented. Of course I've said yes : )

I've been working hard to get a warband together for Dark Age, a sci-fi skirmish game that's been around for a while and has gone through various waves and cycles, but now stands as a great game backed with beautiful miniatures that just needs to get a bit of traction.

For quite some time Dark Age has had the "Post-Apocalyptic" moniker attached to it, and the core event that began to shape the planet of Samaria as it is now was an "apocalypse" of sorts. Five hundred years prior to the current time, the planet suffered a massive economic collapse causing all sorts of companies to pull up stakes and run, leaving behind their expendable workers. But now, five centuries later, the collapse is only a thing of legend and the various alien races that have since landed on the planet (and the extreme conditions of the planet itself) are a bit more a concern than any apocalypse.

Anyway, I was drawn immediately to the Outcast faction (my love of "man against the fantastic" showing through again) and decided to start with the exceptional models of the Salt Flats Nomads sub-faction. Here are the models I've painted up over the last couple of weeks. The schemes are drawn directly from the CMoN Studio models)

This is Bendahrin Durshe, Bladelord of the Tribe, Leader of the Salt Flats Nomads. I love the pose, the detailing, and particularly the bone tulwar (sword).

This big fellow is Kane, the Hand of the Bladelord. Unlike the other nomads, Kane wears a massive suit of bulky armor and he wields the massive Kestrel. 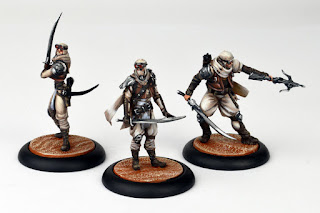 These Tribal Warriors are absolutely beautiful! Lightly-equipped with exceptionally sharp tulwars and poisoned hand crossbows, I'm hoping they'll be as lethal as they are good looking. 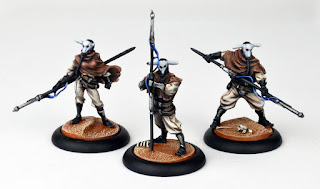 These Nomad Herders are the models that grabbed my attention as I was searching through the Dark Age galleries. Again, the poses are fantastic, and their masks are just the right amount of surreal for me. 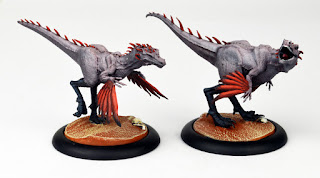 And for my first set of beasts herded by my... well, herders... I've gone for the razor-winged Vrocks. Excellent sculpts, and cast in awesome resin!

I'm off to Atlanta tomorrow to chat with the CMoN folks and get things started. I'll also be getting in a few games of Dark Age. Let's see if my initial choices were good ; )

Cheers
Dave
Posted by davetaylor at 4:00 AM