This weekend I was fortunate enough to be able to attend the Old Line Massacre, a Horus Heresy event arranged by a few friends of mine that brought gamers from Richmond, VA, to Providence, RI, all the way to Glen Burnie, MD.

My FLGS, Dropzone Games, was the site of the crazy gaming - a three-game tourney on Saturday, and an Apocalypse game on Sunday, and they were certainly decked out for it. We had the run of the back room, spreading out over seven tables in order to kill the Traitorous hordes.

I took quite a few photos over the weekend, so I've decided to split them into three posts. This first covers some of the armies that were there, the second will cover the tournament, and the third will cover the excellent Apocalypse game : )

Anyway, on to the armies:

This was the 3,000 point army of Night Lords from Nathaniel Taylor (I have a few more close-ups for our game, which you'll see in my next post). Nate's Apoc force was lead by Konrad Curze, the Night Hauter, himself - the only Primarch to take to the tables all weekend. Nate's army also won the Player's Choice award : ) Nate also loaned his lovely Word Bearers army to mutual friend Jake Landis. 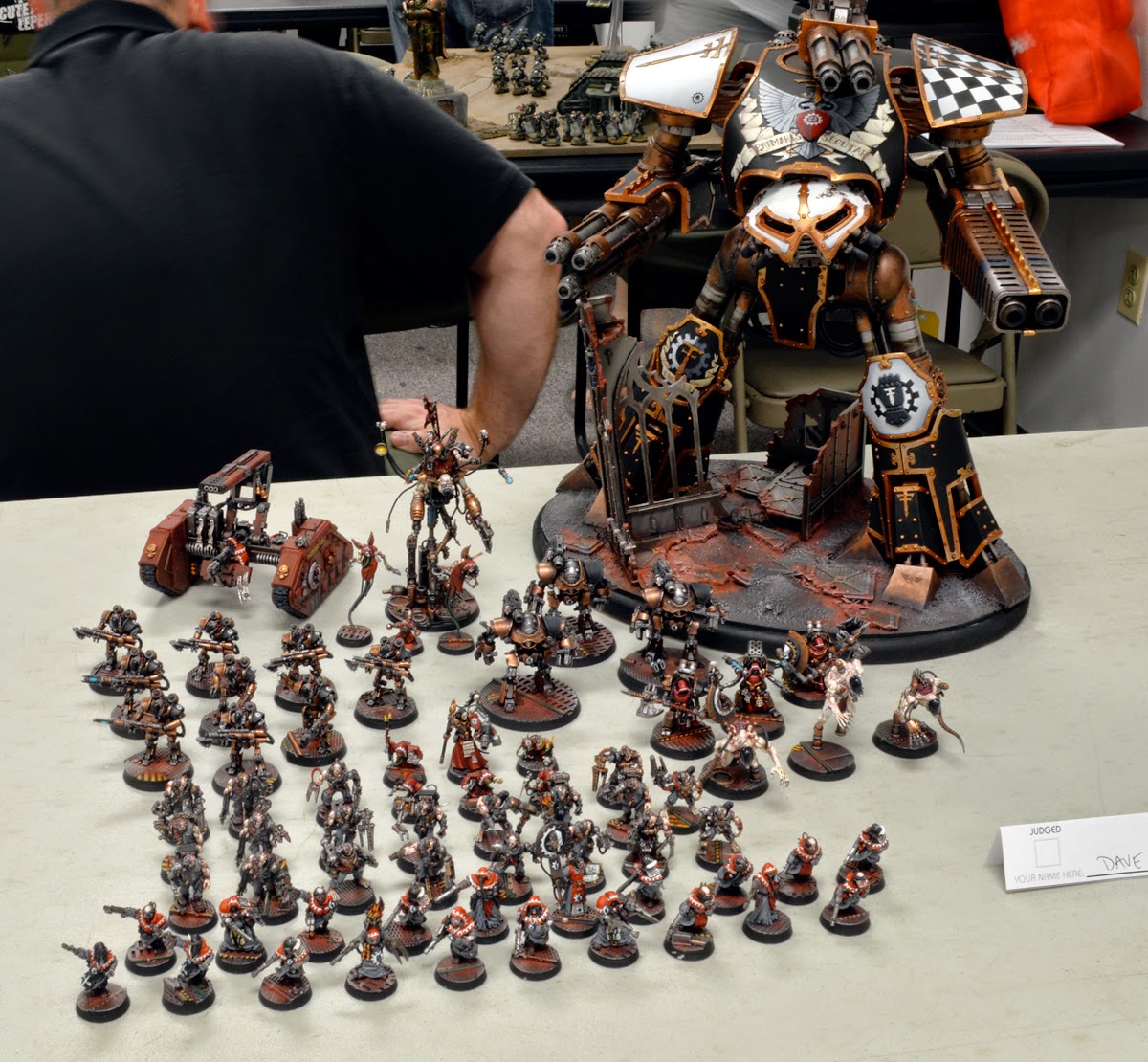 Here is a quick shot of my army, the 1,850 point Mechanicum force, plus my Reaver for the Apoc game. In the end I dropped the Myrmidon Destructors as I wasn't going to get them painted in time for the event. 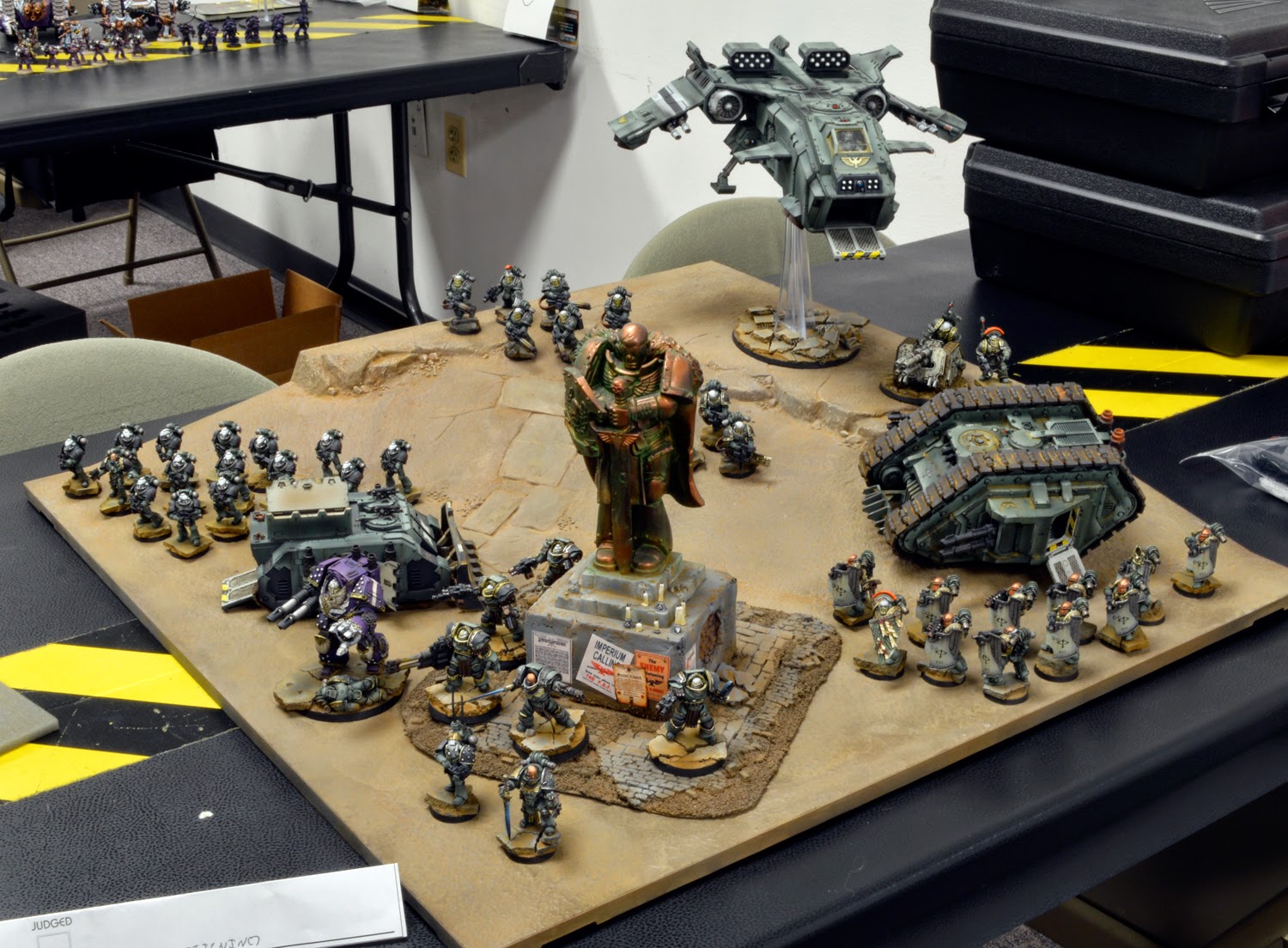 John Stiening from the 40K Hobby Blog brought his spectacular Sons of Horus army, which also took the Best Painted award. More of John's army can be seen on his blog. 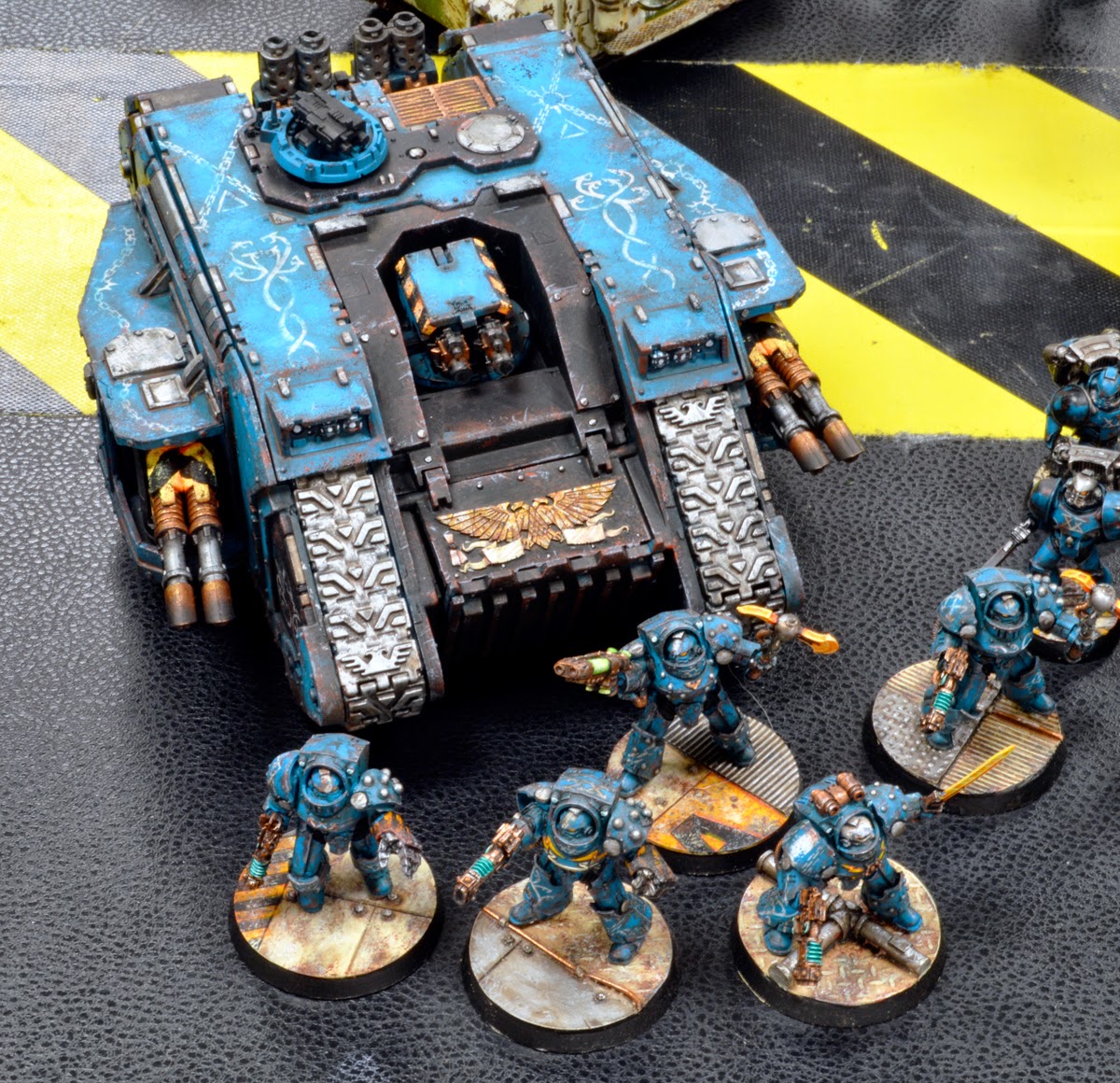 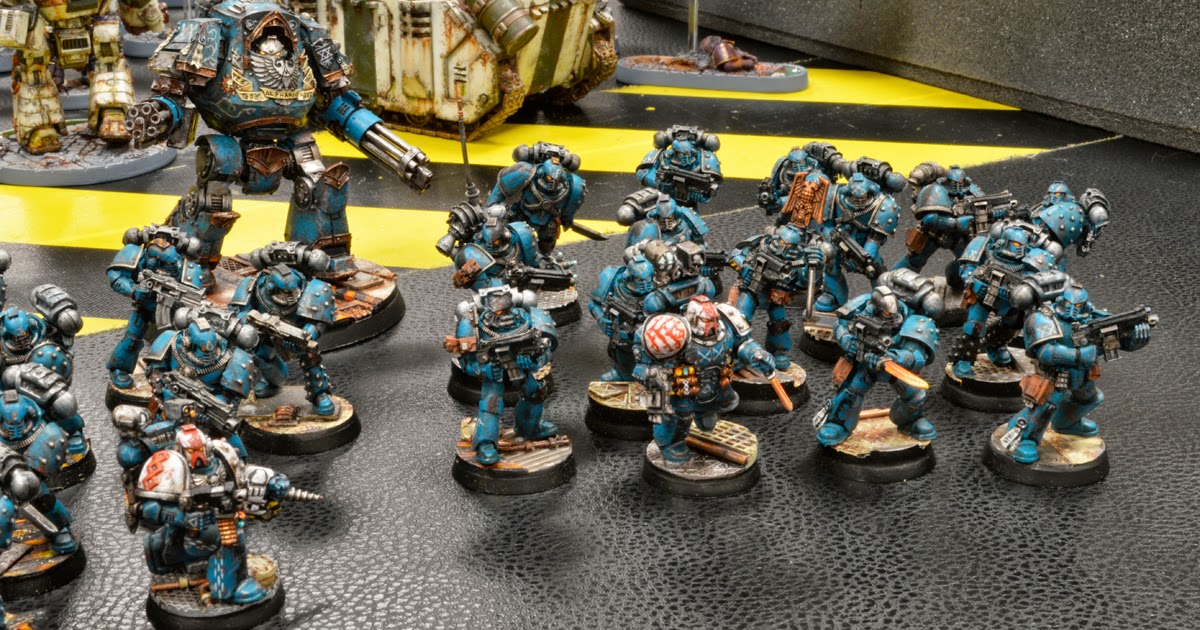 I think my personal favorite might have been Robin Everett-McGuirl's sweet Alpha Legion army. The color was striking, and his use of yellow and freehand detailing was just spectacular. 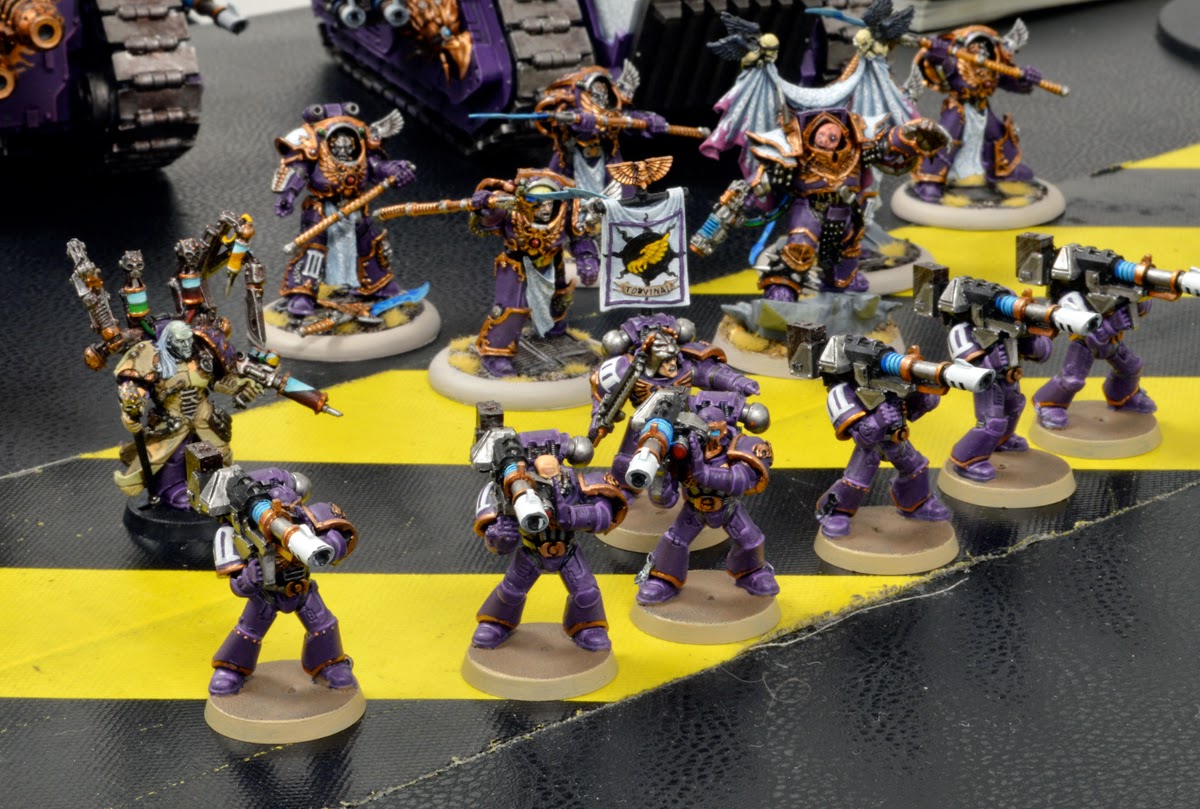 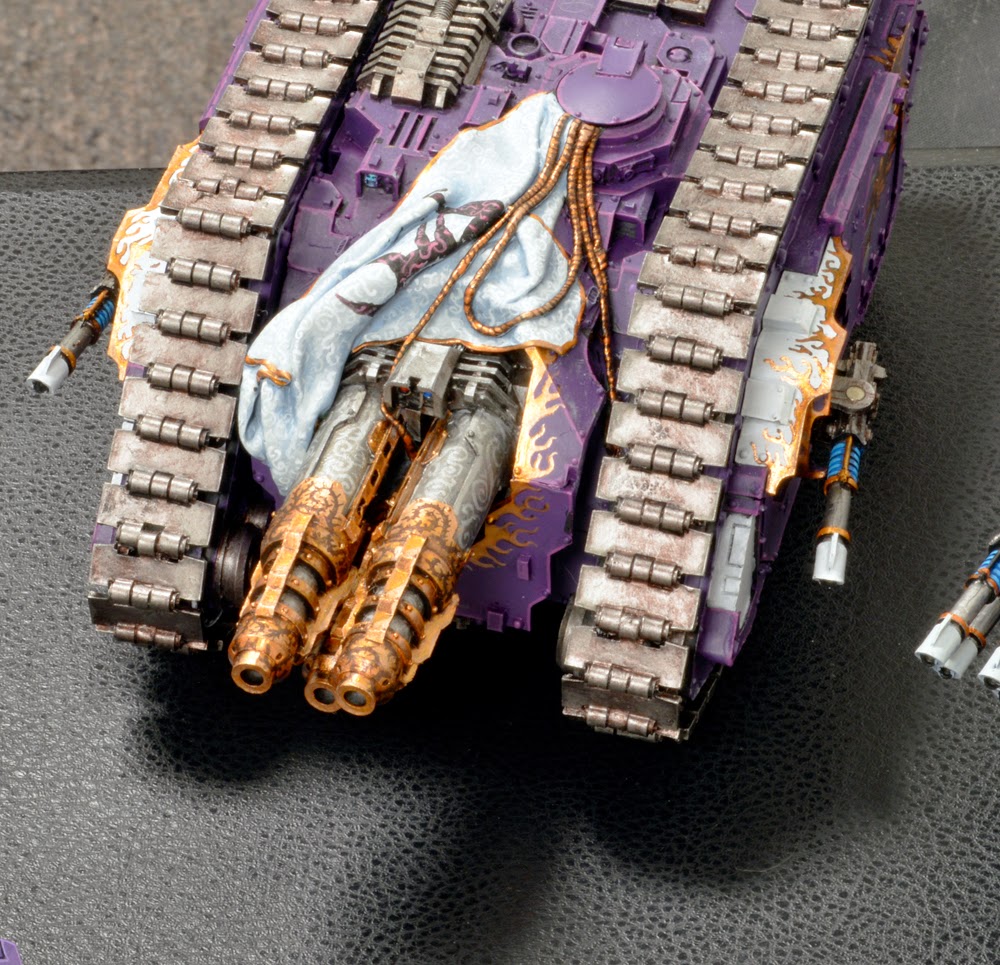 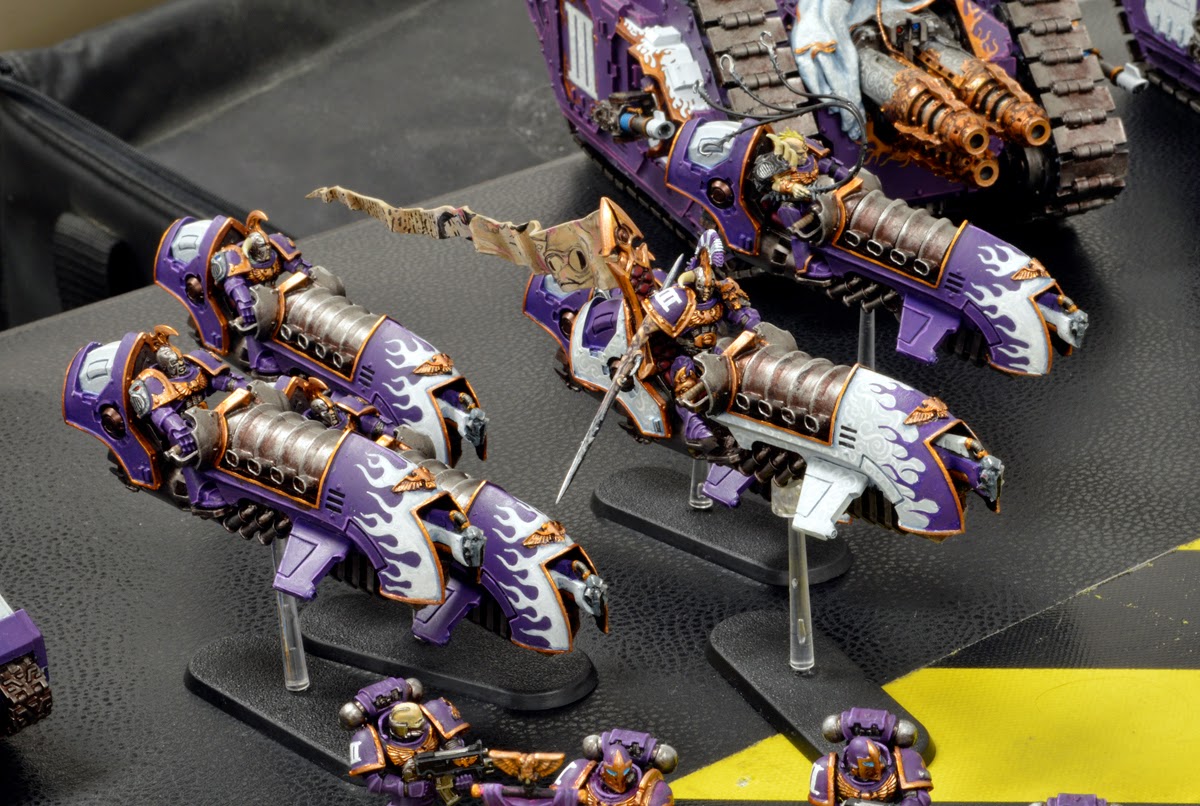 Chris Bowers from Richmond brought along this excellent Emperor's Children army. Although his army wasn't 100% complete, those parts that were showed an incredible attention to detail and flair for the artistic. Beautiful work indeed! 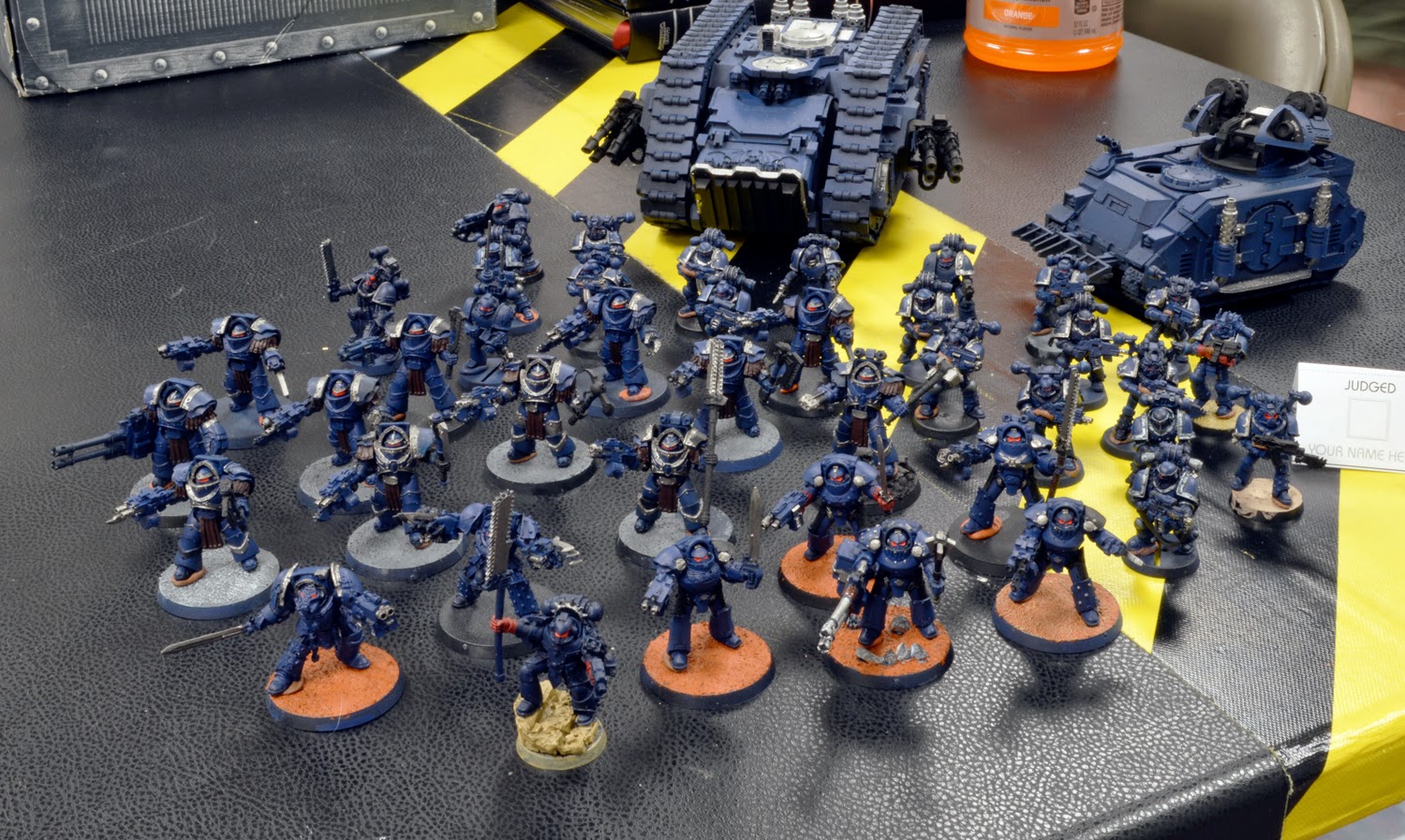 Jay Feigenheimer painted up the second Night Lords army present at the event. Although Jay only got into the wargaming hobby last October, he was ready to fight hard with three squads of Terminators!

Ty Finocchiaro played with this "remnants" army - squads made up of a mix of World Eaters, Emperor's Children, and Sons of Horus. The two jet bike squads and the pack of Javelin land speeders made for a great one-two punch. Ty also loaned his Death Guard army to Matt Murphy for the tournament. 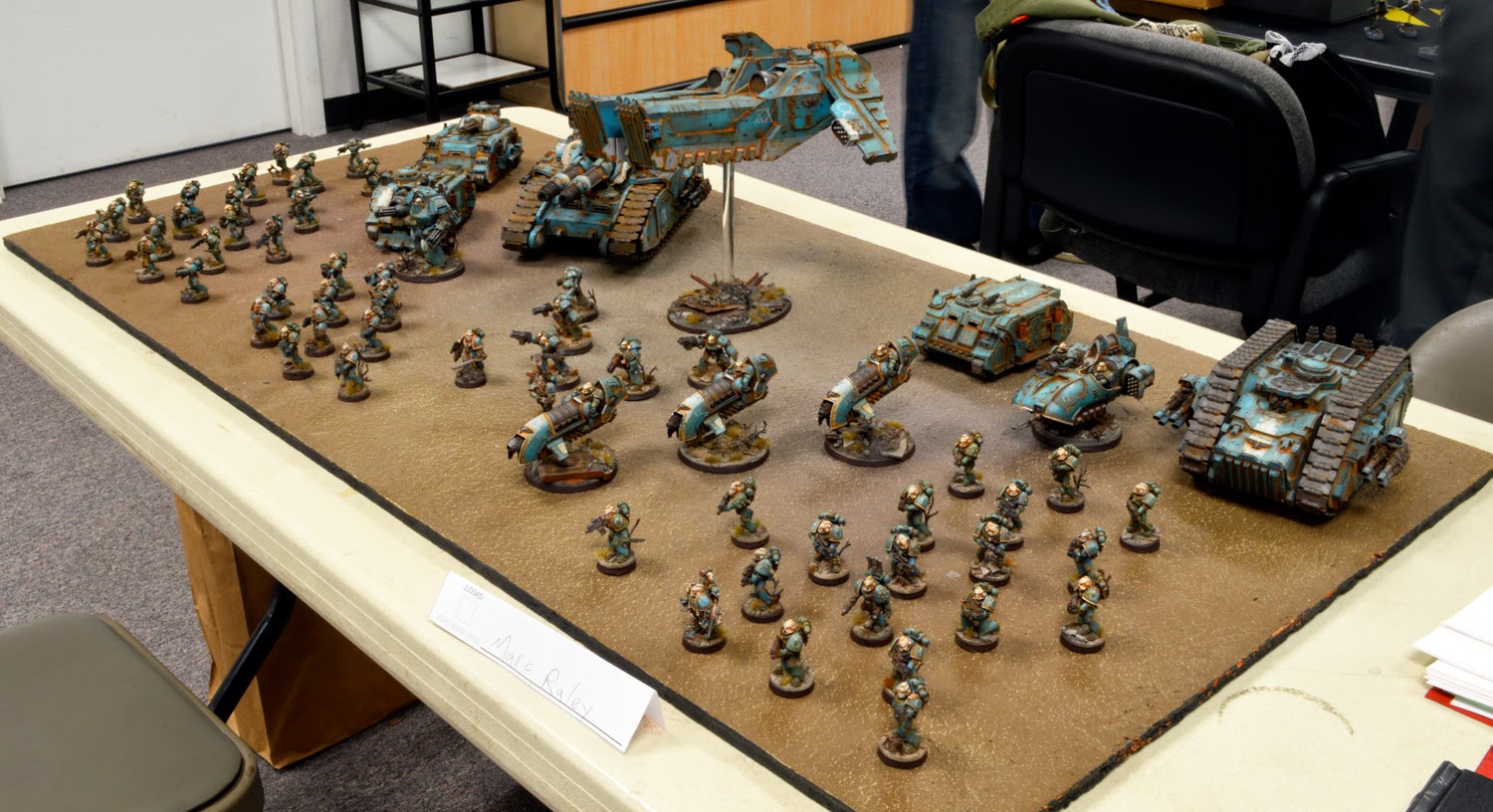 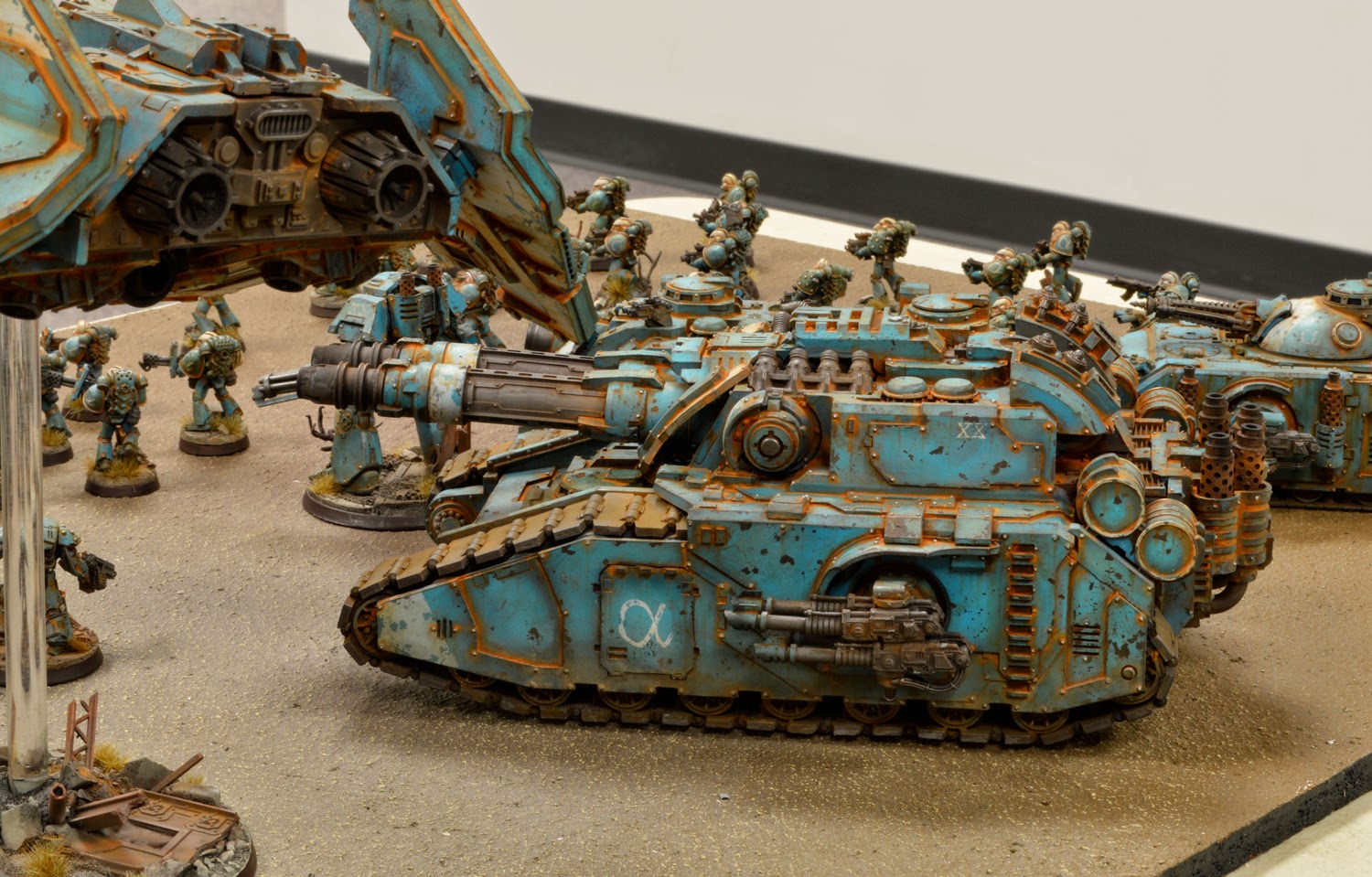 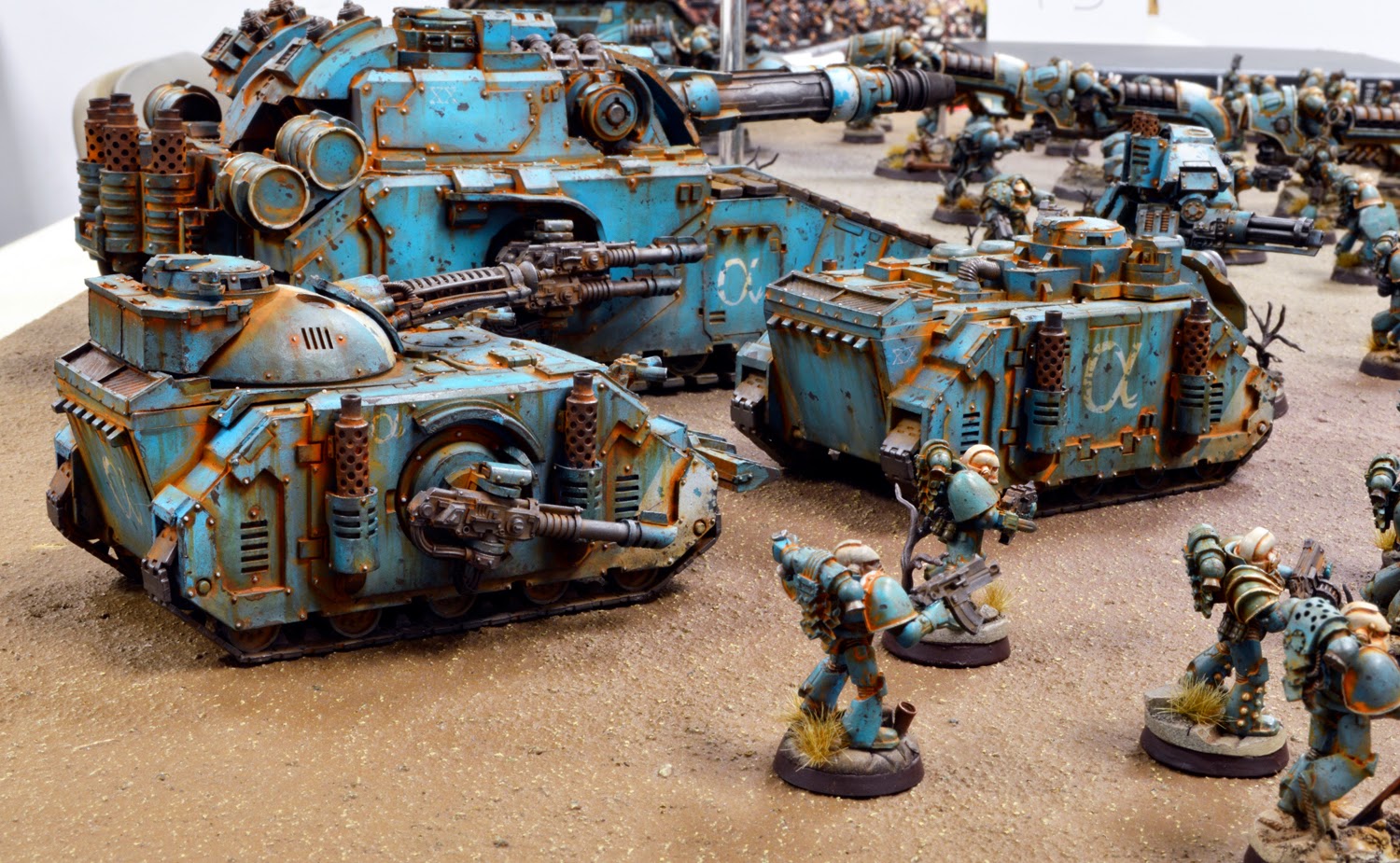 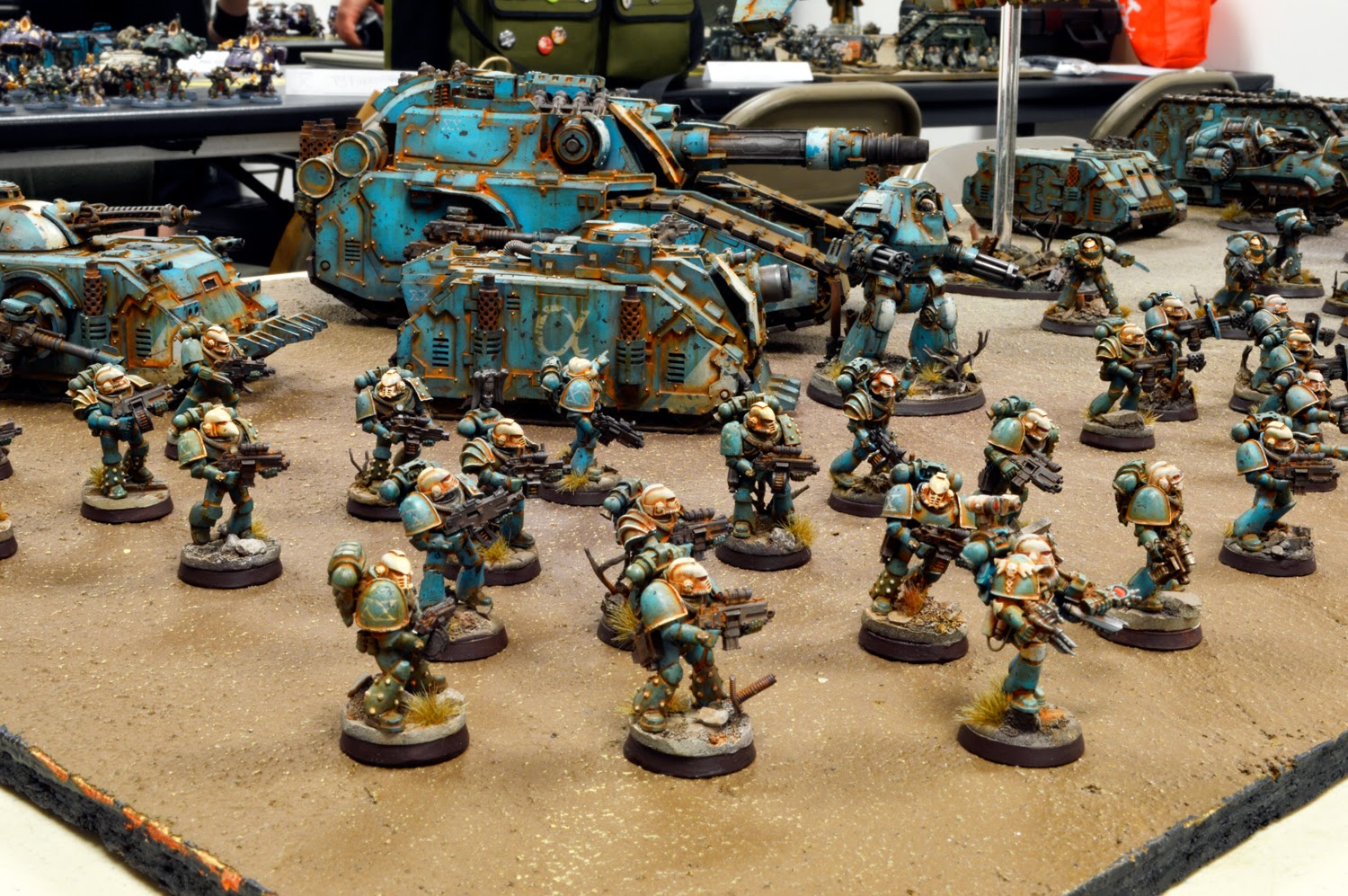 And the final army to show off was another great looking force, Marc Raley's Alpha Legion. These guys have received a great deal of well-deserved praise across the Internet, and are just spectacular to see in person. You can see more shots at Marc's blog.