What was old is new again!

I haven't been idle, hobby-wise, since Adepticon. I've just been without my lights for photography. They returned on Wednesday, so last night I was able to sneak in a few shots of what I've been up to. 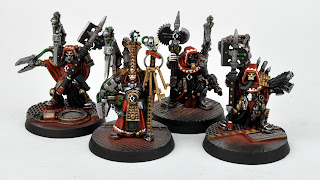 So far you've only really seen the "new" stuff for the Mechanicum army. Well, part of the plan has always been to rebase and touch up the "old" stuff, and bring it inline with my new approach. Above you can see the four Magos/Adepts models from the "never commercially released" Adeptus Mechanicus set that was available for a short time in the early years of this century (vis GW's Skullz program). When I first tackled the AdMech in 2005-6, I converted these guys, and replaced a few missing bits, hence the interesting mix of backpacks and claws etc.

For this update I simply switched their bases, updated their skin color to match the pallid flesh aesthetic I'm going for now, and repainted any military green areas with black or red. They'll be a nice "throwback" cluster of models in the greater procession.

I have over 30 servitors to update as well. Here you can see the new approach to the flesh in effect. The model on the left is my original "greying flesh", then the second step of the new flesh (Vallejo Pale Sand with a layer of Seraphim Sepia wash), followed by the fourth step of the new flesh (highlights with Pale Sand and Dead White). The final scribe servitor on the right has some thin, spot glazes of Secret Weapon Ruby wash pushed into the details. 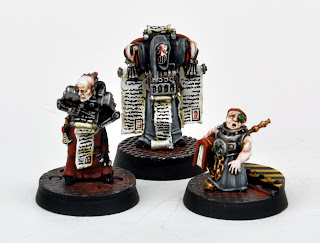 Here are a couple more of the updated servitors on their Dragon Forge Tech Deck bases. 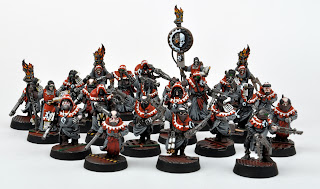 I also had over 20 "Cultists" to bring up to date. Here they are. The bulk of the original conversions are based on the old Bretonnian Grail Pilgrims.

And finally. I was short a couple of 40mm bases (a miscalculation on my part), so I built these ones using plasticard, plastic rods, and a few cool vents and deck sheeting that I received from Jeff (at Dragon Forge) in my order. I think they've turned out very nicely.

Anyway, I hope you enjoy seeing this "update". There'll be a lot more Mechanicum/Adeptus Mechanicus stuff to come.

My mate Graham McNeill, author of Priests of Mars (the book that rekindled my obsession for the Ad Mech), is up for voting in the SFX awards for 2013. Please take a few minutes to head to this link here, scroll down a bit, and vote for Priests of Mars. I (and Graham) would really appreciate it ; )

Cheers
Dave
Posted by davetaylor at 6:59 AM