So, another week, another five Flagellants. This takes the total to 10 models for my Procession of Morr (9 Flagellants and one Corpse Handler). I have another 5 Flagellants primed and on deck. 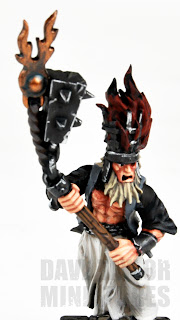 I've decided to add quite a few bells and hourglasses to these Flagellants and also decided to paint them both with a bronzy/brassy sort of approach. This involves basecoating in Tinny Tin and highlighting up with Brassy Brass (both Vallejo Game Colours). On my first batch of five models I found myself adding a patina by mixing some GW Hawk Turquoise with a touch of Skull White and a quite a bit of Secret Weapon Miniature's Algae wash to get a nice approximation of verdigris.

With over 100 models to go, I also knew I couldn't keep mixing as I went, and mixing up a pot of that mix would be too tough, especially when it came to ensuring the paints didn't separate all the time.

I, therefore, asked Mr Justin at Secret Weapon Miniatures if any of his washes would do a better job of simulating verdigris in one pass. He suggested his Storm Cloud wash, which I promptly ordered. 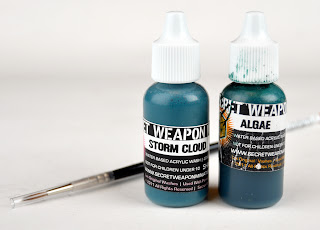 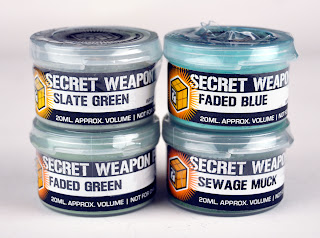 ...a set of the SWM Green pigments, which will be very helpful when discoloring the bronze armor and accoutrements on my character models (once I get around to ordering that Lietpold The Black!) and centerpieces for the army. For an example of the Storm Cloud wash in use, check out the comet on the Flagellant flail above. Not bad at all with no mixing required : ) 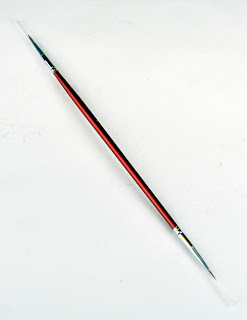 But speaking of brushes, a guy I know from my FLGS (Games & Stuff in Glen Burnie, MD) has been tinkering with a new product for folks who like to use two brushes when they're painting. The two-brush thing is apparently a method used a lot for getting some nice blending work done.

Anyway, Mike has been working with a supplier and has created this double ended brush, with yes, a brush tip at both ends. This means you "two-brushers" never have to worry about where to stick the other brush again, as Mike says "If you can twirl a pen you can use this brush". For more information (or to buy the brush) you can head to Mike's blog BadDadGaming!

PS. Last night I discovered I'd reached a point I never thought I would reach in my life. Despite many, many purchases since their release in 2007, I have finally run out of Empire State Troopers! Looks like it'll be a trip to the store soon to stock up again for this Morr project ; )
Posted by davetaylor at 11:29 AM