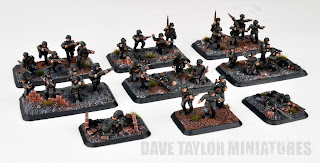 So, I've been quite busy, painting up bunches and bunches of little mens. Thanks for taking my filler post about the awesomeness that is the pending Ogre release in the spirit it was meant. and yes... I'll post some pics of my existing Ogres when the time is right.

Anyway, last night I finished off the infantry for the first of my Panzergrenadier platoons. One command stand (front center), six Rifle/MG stands (rear), one light mortar stand (front left) and an Anti-tank rifle stand (front right). I'm pretty happy with not only the way they turned out, but also with the speed I was able to paint them despite coming to grips with 15mm again. 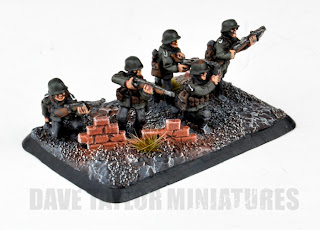 I used the plastic Rubble bases for all the stands (except the light mortar and anti-tank rifle), which gave me a good start. I painted everything separately (models and bases) then glued the infantry to the stands. This seemed like a great plan at the start, but it did mean that I used quite a bit of putty and additional basing grit to make sure that everything blended seamlessly. 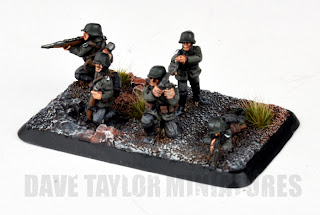 Over the years I've learned that the key to painting up an army efficiently and effectively is to get into a rhythm with it. I'm pretty sure that by the time I'm finished my next platoon, I'll be in that rhythm and ready to share "the secrets" I've learned then.

With all the prone models in the figures I have, I found the guy holding the mortar to be quite amusing, with his butt sticking up in the air, apparently just begging to be shot in it. 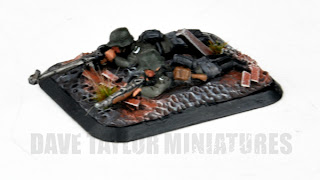 In the comments on my last post JMHahn commented on the differences between certain things in different periods of the war (like the SdKfz251/1C and SdKfz251/1D). Check it out here. His comment was pretty much spot on, but it got me to thinking a bit more about my "accuracy" and the reasoning behind this whole project.

The idea for this is not to be "cheap". As we go along you'll see me spend quite a bit of money. Getting the most out of the purchases will be important, just as getting "reasonably" close to accurate will be important. Building a collection that can span all three periods (Early, Mid, and Late War) will mean that sometimes I'll come up against the 1% of folks who not only know their stuff back to front, but also care enough to call me on it.

JMHahn characterized it as being a 97:2:1 split (don't know the difference: know, but don't care: know and care greatly). Possibly because of the folks I know and circles I travel in, I suspect the ratio I'll encounter will be more like 80:17:3. I'm hoping that should I encounter too many in that 3% I can calm them by pointing out things I have done to achieve accuracy, and remind them, we're all just playing a game.

Of course, I also fully expect that at some stage in the not too distant future, I'll find an army that grabs me so much I'll want to build it as accurately as possible, with all the bells and whistles. 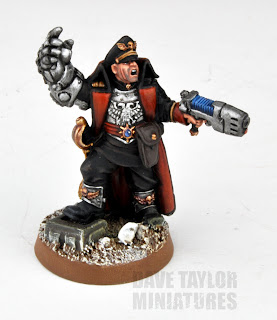 And here's a sneak peek at another project I'm working on at the moment. This is Commissar Hark, the next fig in the long-term, ongoing commission to build a Tanith army.

Cheers
Dave
Posted by davetaylor at 8:48 AM