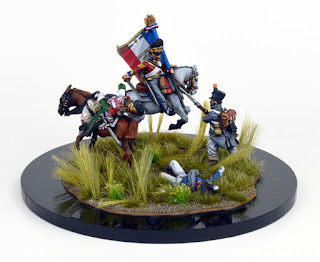 I recently completed a commission for a friend of mine, painting up the three Waterloo vignettes from the Perry Miniatures Napoleonic range. Each of the vignettes represents the loss of the "colours" at some point during the Battle of Waterloo. 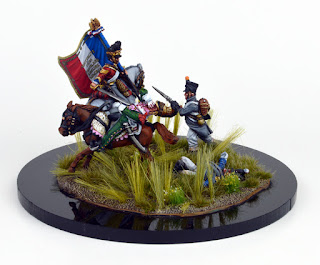 The first vignette shows a sergeant of the Scots Greys taking the Eagle from the 45th Line Regiment. 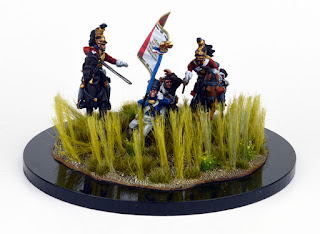 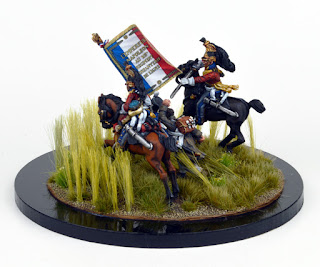 The second shows a Captain and Sergeant of the 1st Royal Dragoons competing to capture the Eagle of the 105th Line Regiment. 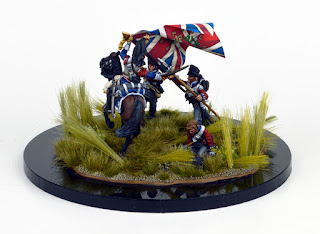 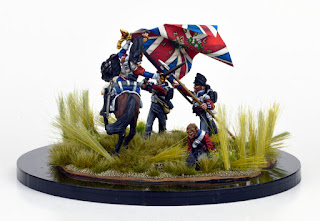 And the third shows a cuirassier of the 9th Regiment taking the King's Colours from the 5th Battalion of the King's German Legion.

Normally I would go with a slightly simpler basing scheme, mixing tufts and static grass and a few clumps of flowers, but all of these action took place on the battlefield, which was then (as it is now) a farmed field in summer. During my recent visit to Belgium, we walk past miles of fields full of barley and wheat (and sugar beets), so I decided that this needed to be represented.

I picked up some long grasses from Scenic Express and trimmed it to an appropriate length. I then gathered together small bundles and glued them down in a regular pattern, as though they had been planted in rows. I also gave a little more space in between each bundle to represent older farming methods. The tufts and flowers were sprinkled in around the base of the barley (or wheat) stalks to act as weeds and other grasses. Of course, much of the battlefield would have been trampled over, so there are a lot of stalks knocked over. 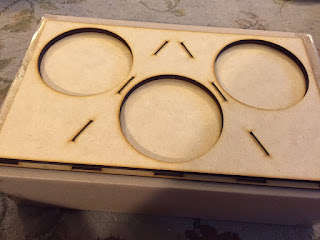 In order to send the vignettes to my friend, I asked Alex at Ironheart Artisans to cut this special shipping box for me. He took my basic idea and really ran with it! The bottom (above) consists of several layers of MDF with holes cut to accommodate the vignettes (as you can see below). 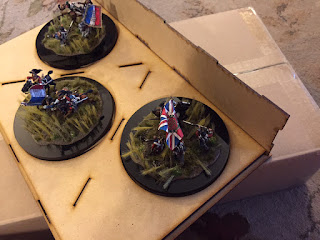 Once the vignettes were in place, I glued in the back wall of the box. 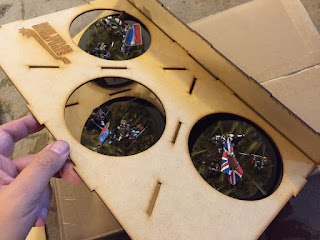 And the lowered down the "locking" layer, with circles a little bit smaller than the size of the vignette bases. This would lock in the bases and stop them from moving around. 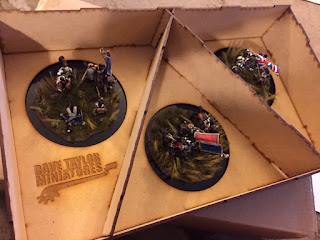 The next step was to add the opposite wall, then glue in the ends of the box. Two angled pieces were added to the box at this stage. These will protect the vignettes from crush damage. 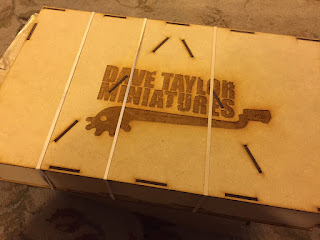 Finally, the lid was glued on (strapped here with rubber bands to hold it steady while the glue dried. I then wrapped it in bubblewrap and put it in a cardboard box.

This whole thing worked really well, apart from one small glitch. As the cavalry models were quite heavy metal minis, two of the horses ended up bending at the ankles. Otherwise, there was no damage.

Cheers
Dave
Posted by davetaylor at 11:19 AM