First up I have the latest construct in the growing ranks of my Mechanicum army. Another Tech-Adept, this time based off the wonderful Forgeworld Nurgle Daemonic Herald model. I was lucky enough to pick one up on eBay (thanks for the assist Jeff), so he immediately got the "robes and cables" treatment. The gun that is his right arm is from the Dark Eldar Talos kit (as is the rounded armor plate), and the shoulder and upper arm are from the Imperial Guard Sentinel chainsaw arm. The cabling are the fruits of my labors from this tutorial : )

I have a few servitors that are almost painted, you should see them soon.

And now, onto the plugs! 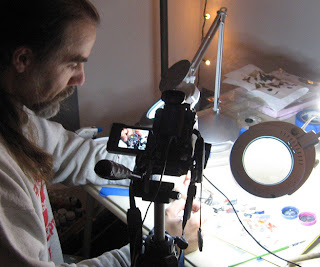 My friend (and Armies On Parade nemesis) James Wappel has a Kickstarter currently running to raise funds to create and distribute his "Painting Pyramid" DVDs. James paints professionally and has a very distinctive style that always draws a crowd.

I invite you to check out his offering here, and pledge to the effort. There are many wonderful things to be learned from Mr Wappel! You can also checkout his blog here.

The second Kickstarter project I'd like to draw to your attention is from my friends Rick Priestly and John Stallard - Beyond the Gates of Antares.

In recent times (ie. 2012) there were a number of "incredibly successful" Kickstarter projects that raised hundreds of thousands (even millions) of dollars, all on the back of very strong offers and pledge rewards that had all been very carefully conceived and developed prior to the launch of the project. In quite a few cases these Kickstarters were essentially pre-order systems for a direct sales model. A few store owners I have spoken to recently have not seen significant sales of (for example) Zombiecide, yet have dozens of gamers who bought their sets through the KS and are playing in-store.

Obviously this is a valid selling strategy, and we must realize at the same time the sort of impact it might have on our local FLGS. I've been involved in quite a few interesting discussions over the last week or so, and it seems that most folks were agreed - Dark Space Corp were tackling their KS differently, possibly even in the "spirit of the original intention of Kickstarter" (no Constitutional scholars need apply).

Instead of a slick presentation of initial ideas, a low target goal, and dozens of ready-made stretch goals, the Beyond the Gates of Antares KS was launched with a concept, a dream, and a target that reasonably matched actual development costs.

That dream is to build a core set of backers who all get to have input into the development of their game. While at first glance this kind of thing might seem "Tom Sawyer-esque" (as commented on TGN), I know that for Mr Priestly that ideas for game rules that work are never a problem. It would have been quite easy for him to write a new set of sci-fi rules, but this is a new approach, an approach made possible by the collaborative tools available online.

So, if you checked out the Beyond the Gates of Antares KS in its early days and steered clear because there seemed to be no clear and obvious piles of figures that you'll never paint, I urge you to return and see what's come of the discussion over the last five weeks. A lot of great ideas, concept sketches, and gaming rules are evolving before our very eyes.

Kind of makes you glad to be a toy soldier geek ; )